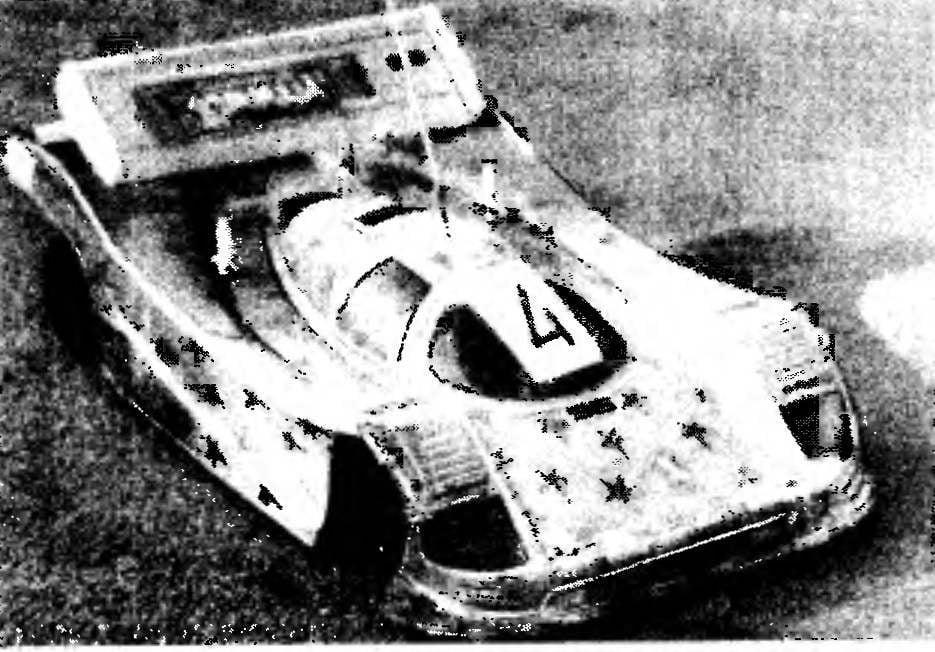 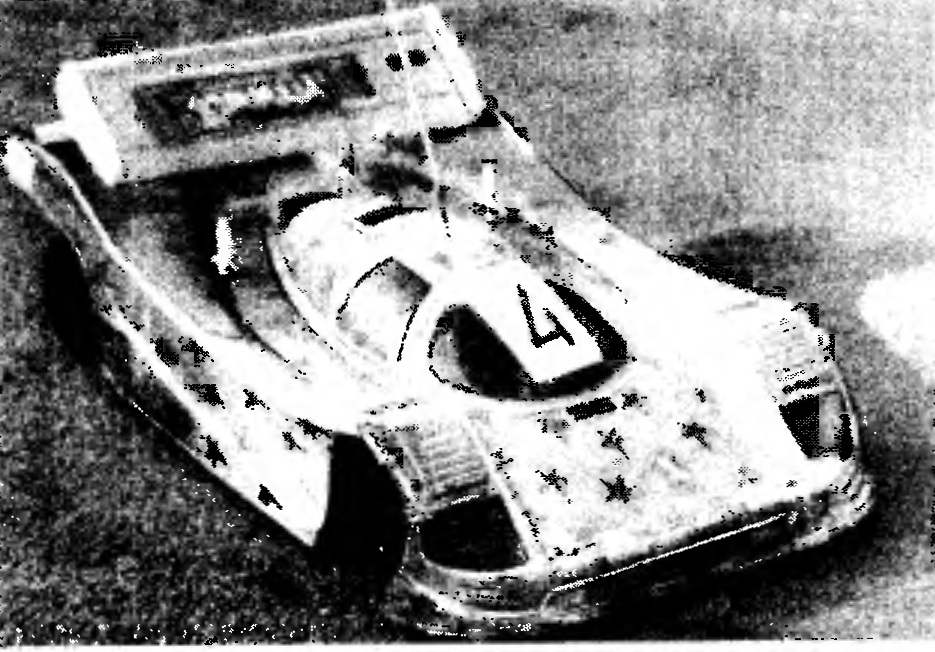 In the Russian self-similar sports, as worldwide, the most popular class of RC 10L. RC little micro-car is equipped with a motor of the type “Mabuchi-540” and the battery pack of the six elements. Control occurs through two channels — the turn of the front wheels and speed control of the motor. Competitions are held on the track, marked side; it can be fitted inside (in the hangar, hall, indoor stadium) and the outdoors. Body patterns repeat! real racing car in scale 1:10.

As shown by the development experience of the last two lay down, fully improvised structures operated little. For example, in the Championship of Russia of 1995 in this class only about 5 of micromachines 126 of Achashverosh could be considered completely self-made (and 80-90% of chassis). It is better to use to create the model-ready components and parts, which offer numerous foreign and domestic manufacturers. Some athletes can arrange a good manufacturer of parts and assemblies on the basis of organizations, clubs, and stations of technical creativity and realize them by sale or exchange between colleagues at seminars, training camps or competitions. During the championship of Russia spontaneously emerged “market” where you could buy almost any of the components required for making RC racing action in this class (and related — RC buggy electric). As shown by the last competitions, two-thirds of the participants were on the micro cars is presented below of the structure using the principle of Assembly of the machine: simple made myself, the rest acquired a finished performance or as prefabricated.
Popularity and mass character of the proposed models today due to its reliability and stability for every distance of trails on which to train and compete to the Russian avtomodelisty. More complex designs often denied and were not given their “pilots” to realize their full potential in the race. Furthermore, the setting and adjustment are good, but complicated suspension and running gear took more time and engineering costs.
Chassis frame model is made of CFRP plates with a thickness of 2.2 mm. Composite materials are strong enough and do not form a permanent deformation in collisions with obstacles or a model of the opponent (in fact in some areas of the track, the speed of 60-70 kilometers per hour!). Don’t forget, chgo plastics conduct electricity so well insulate the contacts of the entire system of the electric drive and control. Shown in the drawing and are visible in the photos window of relief can be done at your own discretion. But don’t get carried away with this process, not greatly weaken the strength of the chassis.
In the bow is fastened protective bumper-bumper. The outer contour of this part depends on the shape of the nose of the body. The material for the bumper can serve plusgin polyamide, vinyl plastic, caprolon, high-impact polystyrene. The thickness of the workpiece is usually applied in the range of 4-6 mm. bumper mounted front rack fixing body of the body.
Front suspension is independent. Leverage the suspension has to provide deflection of the front wheels when entering the model into the turn and cushioning. The nodes left and right wheels are connected by a carbon-plastic plate, ensures a sufficient stiffness of the front axle. The management steering the machine is mounted on nylon racks screwed to the chassis. Instead of rocking on the slot machine output shaft is secured the lever with a protective clutch. Pull — out steel wire type OVS
with a diameter of 2.5 mm threaded clevises are made in the form of ball joints.
General view of the chassis of the RC car. 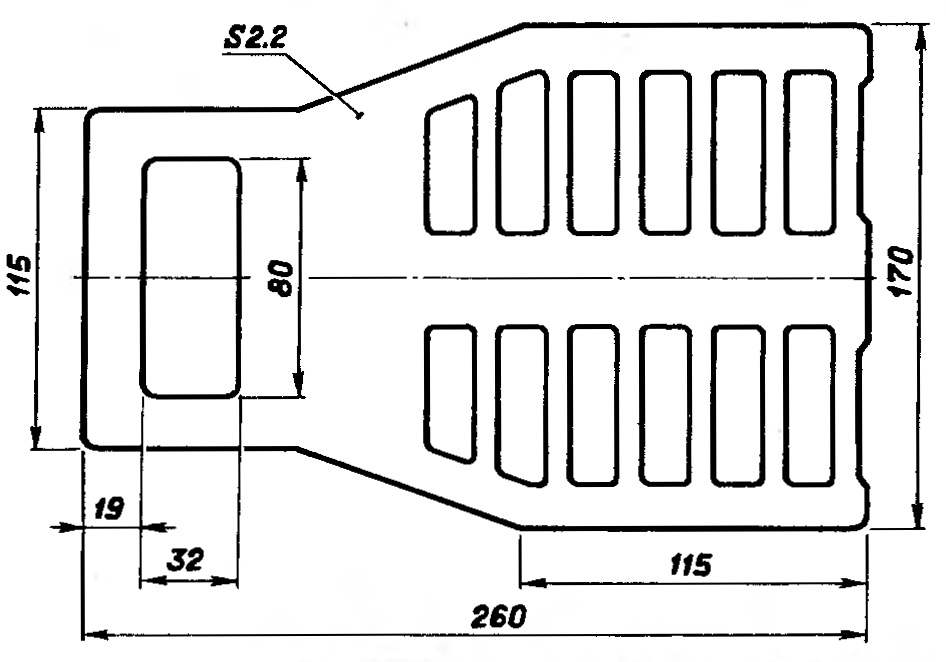 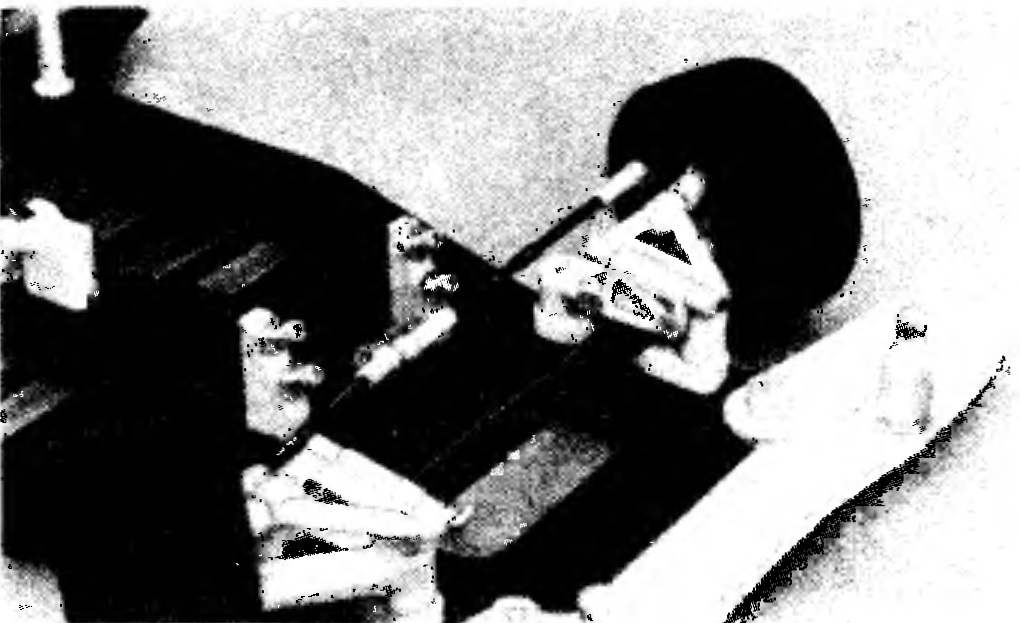 The front of the chassis with the bump, the suspension units of the front wheels and control wheels. 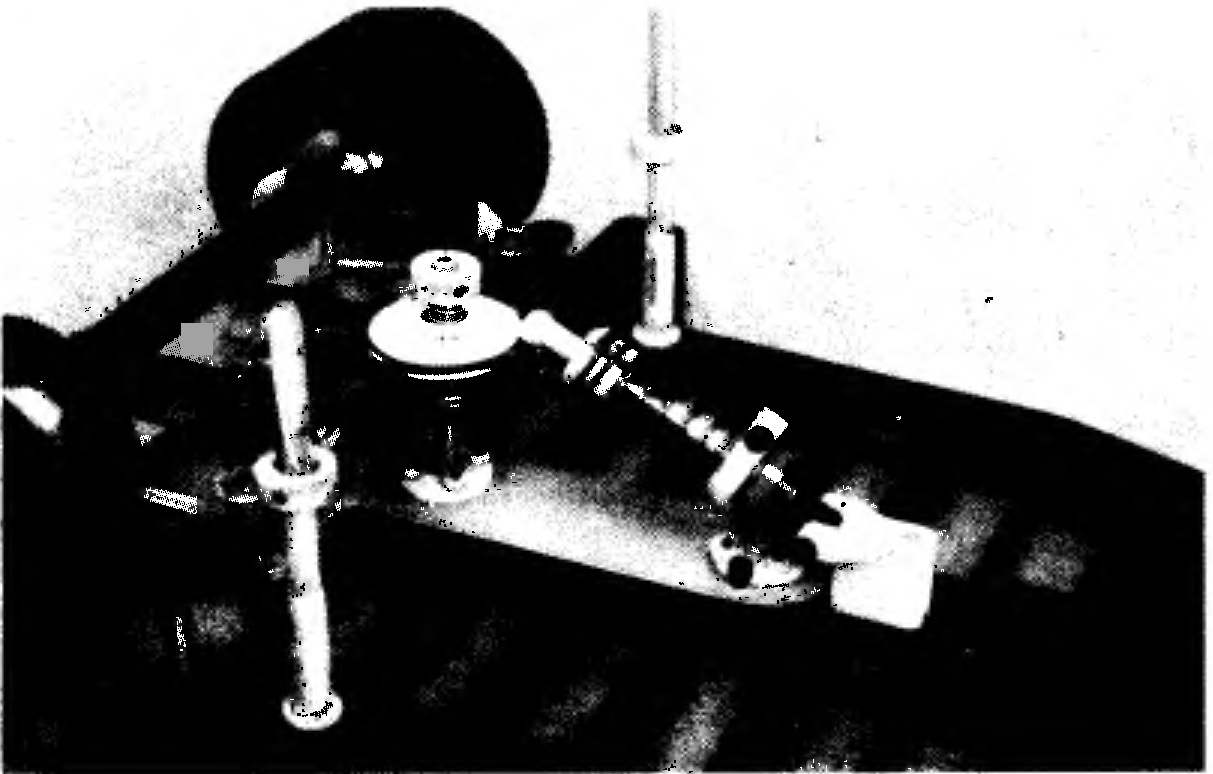 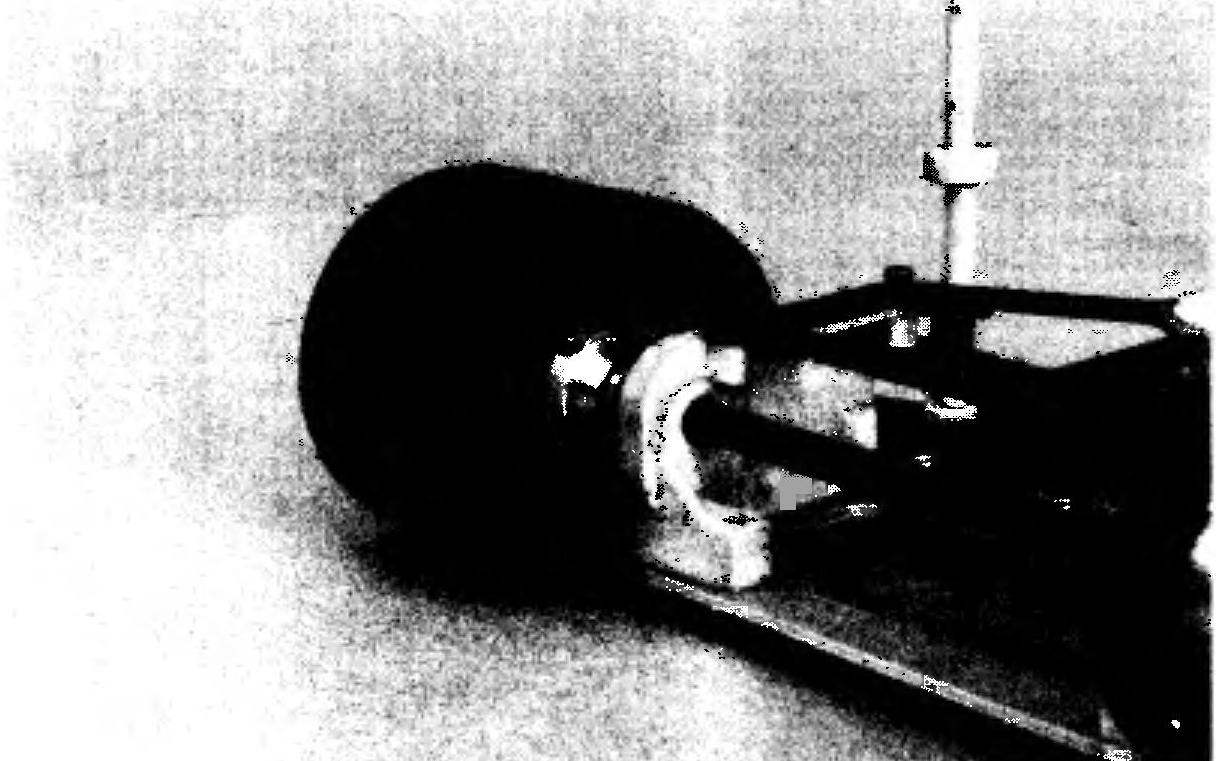 The left part of the rear axle 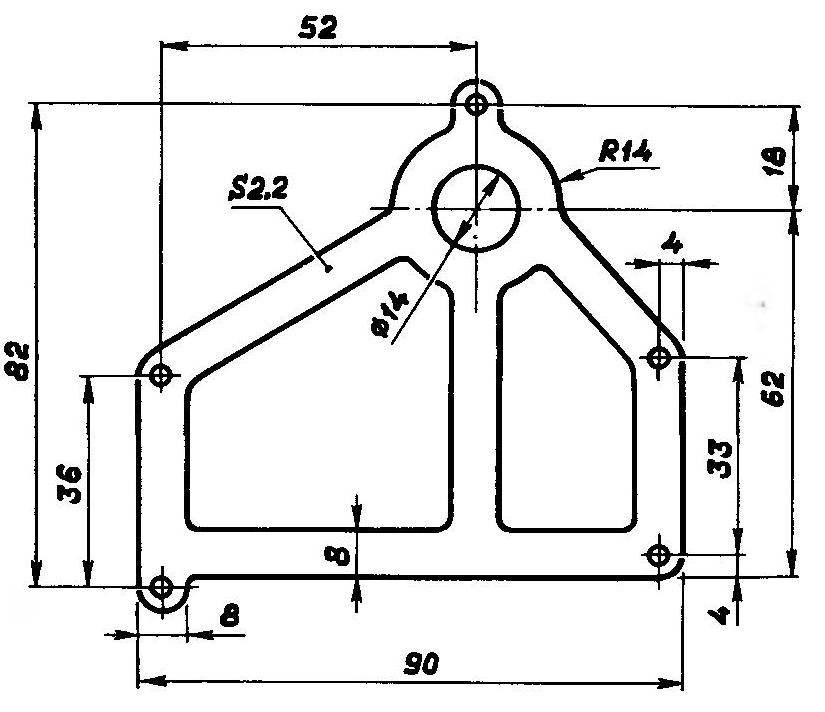 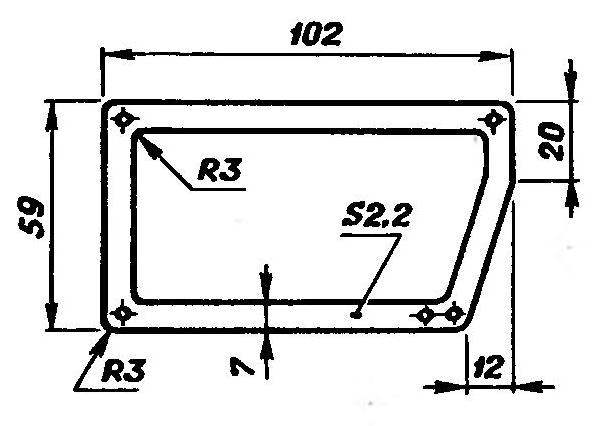 The lower frame of the rear axle.
Unlisted holes to run the place. 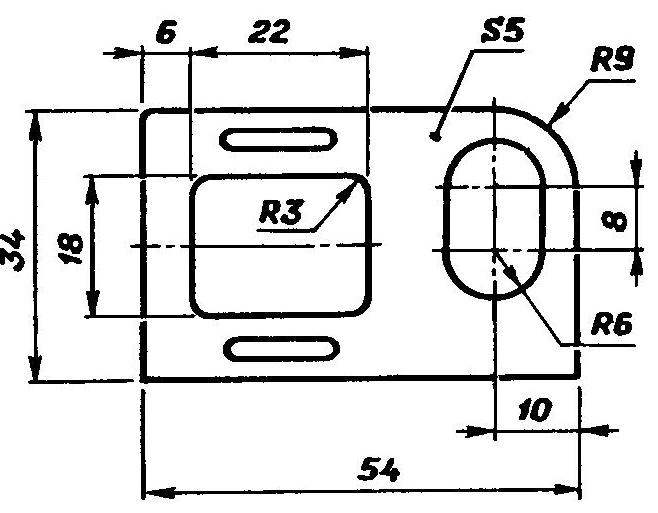 Motor mount.
Unlisted holes to run the place.
Right side rear axle with ball differential.
Depreciation-damping suspension rear axle
Plate-absorber.
Unlisted holes to run the place.
Spring strap
Rear axle with suspension is usually collected separately and attached to the chassis ready node. It consists of carbon fiber upper frame, the lower duralumin frame, motor mount with bearing and ready strut with nylon bearing. The axle connecting the rear wheels is made of CFRP or duralumin hervorhebung. The axis diameter is 6-7 mm. the Left wheel is mounted to the axial screw within the hollow axle. The hub of the right wheel is connected with the driven gear through a ball clutch. The last form eight balls with a diameter of 3.17 mm (from bearing 5×19) in the nests of the spur gear, and compressed from two sides by hardened steel washers. Adjustment efforts in the coupling is performed by tightening the axial screw securing the right wheel. Properly adjusted, the clutch allows the model to start smoothly without slippage of the drive wheels. On turns and bumps, it works as a differential.
The driven gear made of ka-prelone or glass filled plastic. Its diameter is 46 mm, number of teeth 90, a module of 0.5. The pinion on the shaft of the motor is selected depending on rpm and torque. As a rule, from 14 to 18 teeth, and it is made of bronze.
The engine is mounted on Motorama screws. To install the correct engaged gear position of the engine can be adjusted by moving it in the grooves of the mounting holes. Between the engine mount and the engine puts the remote washer is the same shape front cover of the motor.
Assembled rear axle is hinged to the chassis using glass fibre laminate PLA-stinu-absorber with three screws. In the chassis frame this part fixed clamping washers. The back serves as a support rod, which is the axis
priceomega shock absorbing node. The latter consists of a Belleville friction washers and springs. The diameter of the polystyrene washers equal to 24 mm. the force of the clutch is regulated by the spring compression washer. The lower support spring is an additional spring strip of CFRP. The simplified and widely used variant of a support spring placed on the axis of the friction damper of a conventional support sleeve (excluding, therefore, the use of the aforementioned additional spring straps). For quick damping of vibrations arising from the operation of the suspension in the race, set the damping of a spring-oil shock absorber. This item is factory made; it is attached to the frame of the chassis with a bracket from caprolon, which also contains the slot floor hard plastic tube the output of the antenna. With the rear axle the shock absorber is connected by ball and socket joint. Front of the rear wheels are attached to the protective “ears” of the CFRP plates (material for them can also serve as caprolon, fiberglass, or viny-
Plast). The rack fixing body, and additional spring strips screwed the same screws that the protective “ears”.
The battery pack is placed over the Windows facilitate the chassis frame; the receiver and the speed controller before the bracket damping of the shock absorber. A model stamped from a thin sheet of Lek-San or polycarbonate. Rims are molded from nylon or ABS plastic. Homemade “tires” foam today in no way can compete with branded tyres, and we suggest as soon as possible to buy several sets of these products.
Dimensions of finished model: full length — 508 mm, width — 235, height — 128, base 260, front track — 178, a rear track — 184. Curb weight of the micro-car, only about 1700
The proposed successful model grade RC 10L manufactured, successfully tested and submitted for publication of the master of sports A. Fedotov (Moscow avtomodeley club).
V. NIKOLAEV, engineer