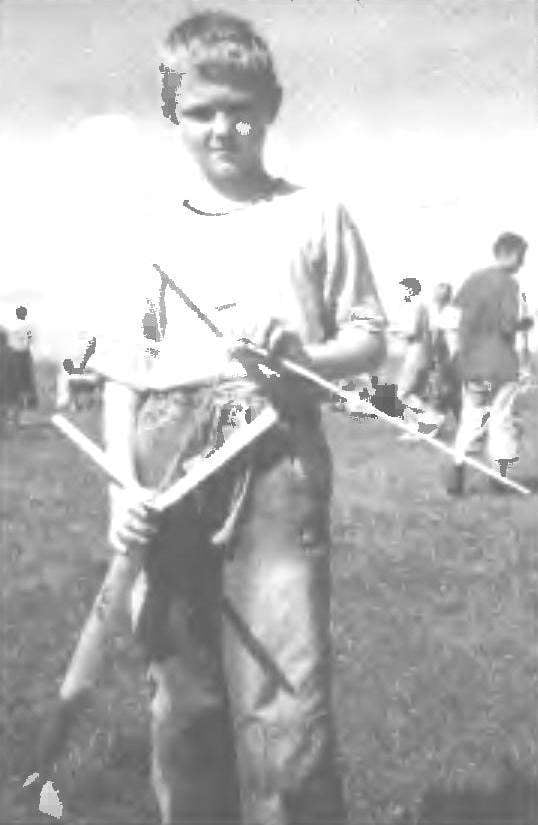 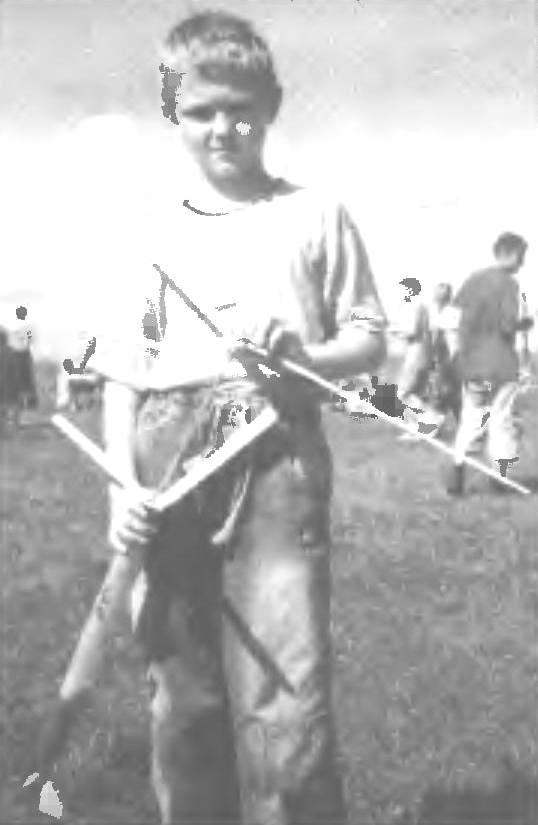 General interest participants and experts of the past championship of Russia for sport flying showed to the model of the winner in the class of rotochutes (S9A) Mr. Voronenko. I must admit that in my many years of practice in the rocket modeling coaxial rotocut is an extraordinary event. I believe that this information will be of interest to readers of the journal “modelist-Konstruktor”.
The container (carrier) rotor made according to known technology — a molded fiberglass on a mandrel of variable diameter of 39.8 mm. to 10, 2 To increase the rigidity of the body of the carrier is reinforced with a Kevlar filament wound spiral throughout the length of the variable pitch — from 18 to 5 mm (depending on diameter).
To the caudal (motor) compartment of the carrier on the epoxy glued three stabilizer carved from balsa veneer with a thickness of 0.75 mm and reinforced with epoxy. One of the stabilizers attached to the thread of the suspension, to which is tied a piece of gum — absorber. Its free end attached by a knot in the sleeve of the head fairing.
Bearing element of this model consists of two coaxial rotors with different rotation direction. One of them (upper) is three-bladed with a diameter of 880 mm. the blades have a small sweep and the angle “V” Blades of consoles (and console root elements) are cut from the balsa plate with a thickness of 3 mm, give them a convexo-concave profile. Between the elements of each tend to connect the hinge, pasting bottom striped nylon fabric with a width of 14 mm (figure hinges not shown). In an open position a predetermined angle “V” (3°) is provided with an elastic disclosure of consoles, a tight top. And at the bottom of its ends clamped common node.
All three of the blade root parts are pivotally connected with the hub of the rotor It consists of prisms and rods. Prism, to the lower plane of which is bonded to the connecting strips of fabric, balsa is an equilateral triangle with thickness of 3.5 mm. from the Top to the prism attached the rack with a groove (gum), carved from basswood on a lathe. Inside the prism and stand glued the bushing, through the hole which the threaded shaft rotor mount having a top loop-limiter. And its lower end is attached the upper end of the rod, pre-threading it (the shaft) through the nozzle, which is then glued to the end of the rod. 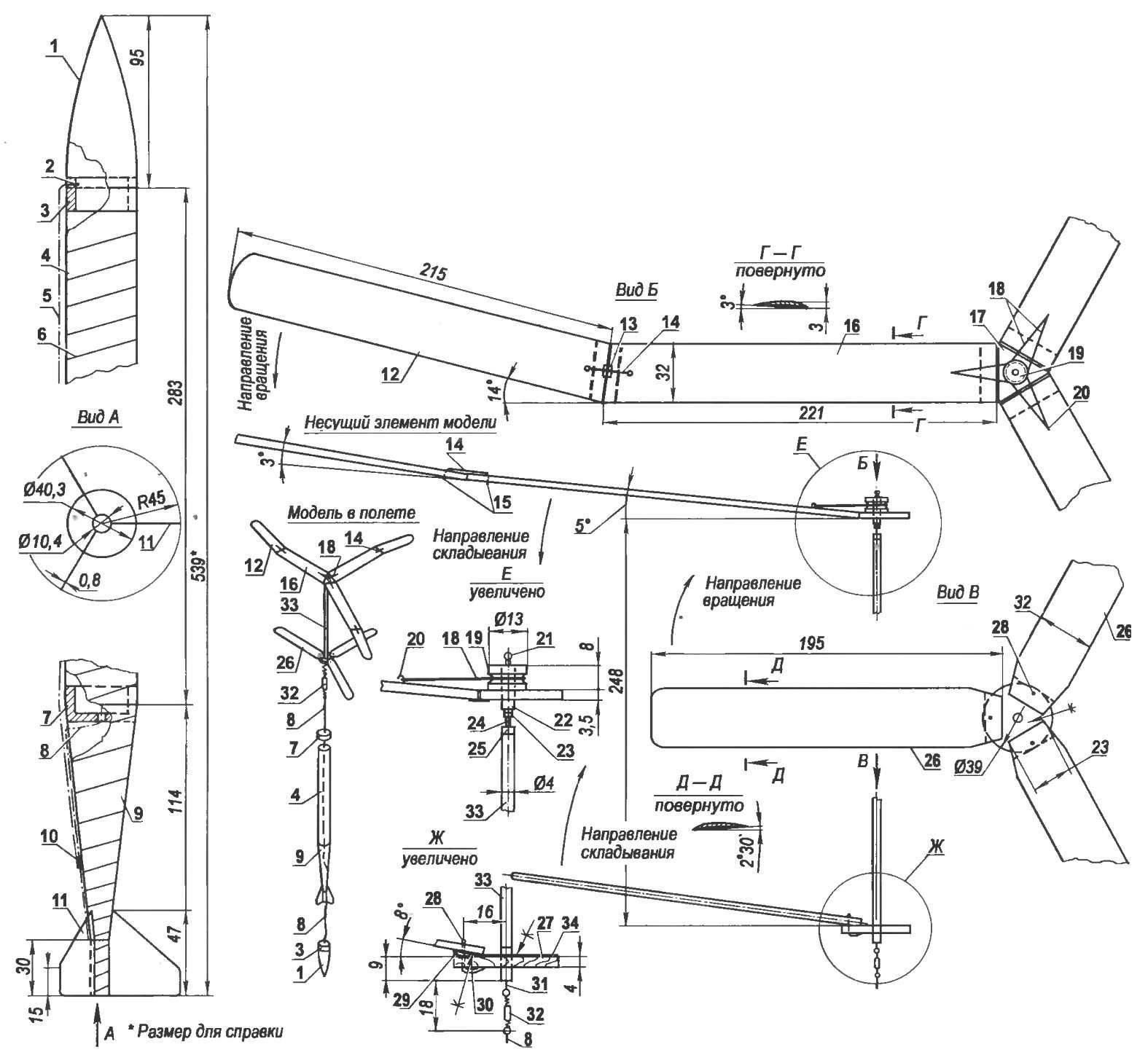 Model rotocut class Ѕ9А of the champion of Russia 2005 among boys G. Voronchenko:
1 — fairing; 2 — the node (the locking mechanism) of the shock absorber; 3 — the connecting plug; 4 — body; 5 — elastic (shock); 6 — reinforcing Kevlar thread; 7 — wad; 8 — strand suspension housing; 9 — the rear element; 10 — sealing connecting thread and the absorber; 11 —stabilizer; 12 — console upper blades; 13 — pad; 14 — gum disclosing console; 15 – knot (clip) gum; 16 — the root element of the blade; 17 — lens; 18 — the elastic return of the blade; 19 — stand for elastic bands; 20 — the hook; the 21 —eyelet (loop) of the suspension shaft of the rotor; 22 — bushing; 23 — washer (bead); 24 — shaft suspension rotor; 25 — head; 26 — blade lower rotor; 27 — reference frame; 28 — knot (clip) gum; 29 stop; 30 — the elastic return blade; 31 —hinge hinge mounting (bearing); 32 — hinge (vertloc); 33 — rod; 34 — tissue fastening bottom blades
Rod is a fiberglass tube with a length of about 240 mm, is laminated of two layers of glass on the mandrel with a diameter of 4 mm. To the lower end of the tube rigidly attached reference frame— a circle of balsa veneer with plywood with a diameter of 39 mm and thickness of 4 mm. To the upper surface of the pivotally hung the blades of the lower rotor. To do this, glue a triangle of fabric to the frame, leaving each of his hand-free adhesive strips with a width of 10 mm, which, in turn, bonded to the lower surface of the blades. To create a specific angle “V” blades (about 8°) at the edges of the frame at an angle of 120° bonded to three rails with a section of 2×3 mm and a length of 20 mm.
When the disclosed rotor blades and the frame at a distance of 16 mm from the center drill three holes with a diameter of 1 mm, through which pass the elastic return. One end is attached to the lower surface of the frame, and the other is fixed on the upper surface of the blades of an ordinary node.
The blades of the lower rotor (three of them) are made of balsa plate with a thickness of 3 mm. the Profile is convex-concave. The length of the blade -195 mm, width 32 mm, For the roughness of their surface, like the blades of the upper rotor, is covered with two layers of nitrocellulose lacquer.
In the lower end of the rod through the lugs glued the simplest bearings — fishing vertljuzhok. And its free loop tie thread suspension of the case.
The model preparation of rotachute to start is carried out in such sequence. To begin to suffer model with the hands of a certain height (about 3 — 5 m), achieving steady flying with the decrease in the autorotation mode, it Should be borne in mind that the upper and lower rotors rotate in opposite directions. First, fold up the blades of the lower rotor, bringing them to a vertical position. This condition is fixed a thin rubber loop.
Next, fold down console, top of the rotor to touch the root, then bends down (to the bar) each folded blade. Before installation in the housing (container) of the folded rotachute remove the fixing of the blades of the lower rotor (if you did) and put the suspension thread through the hole in the wad and insert it into the media. Well then stack rotocut inside and put fairing. Before you start installing the engine.
The mass of rotachute G. Voronchenko without MRD — 27 grams.
V. ROZHKOV