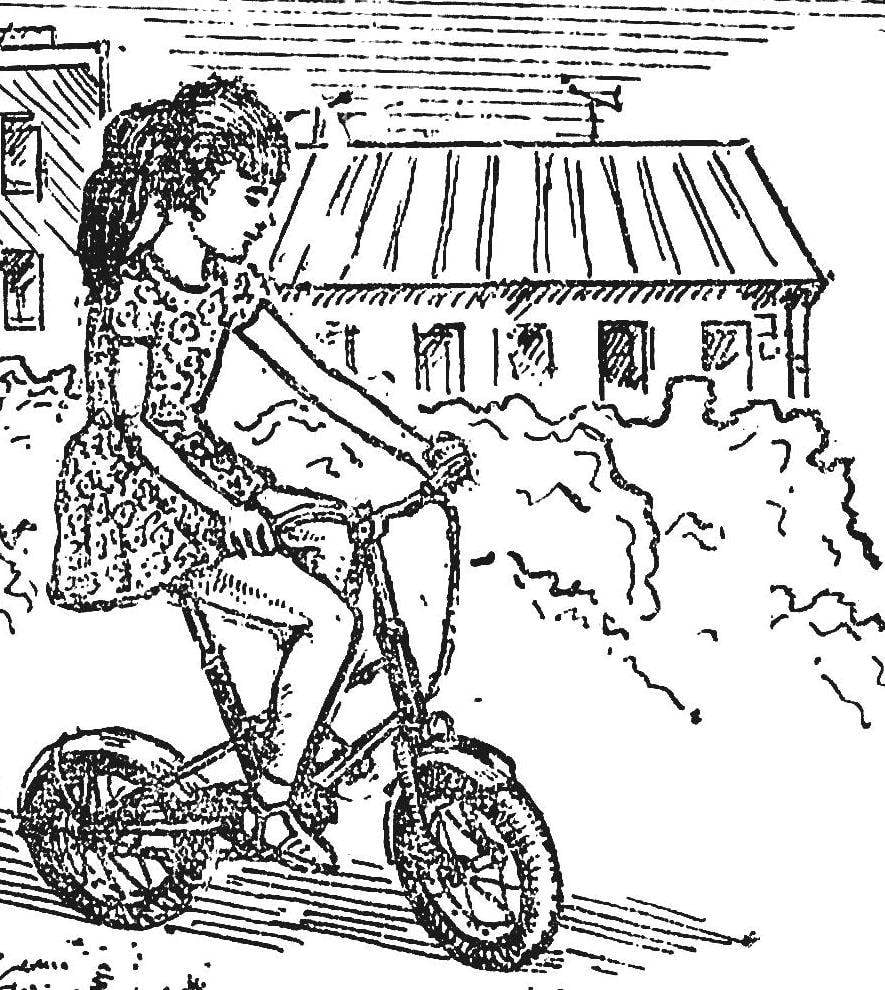 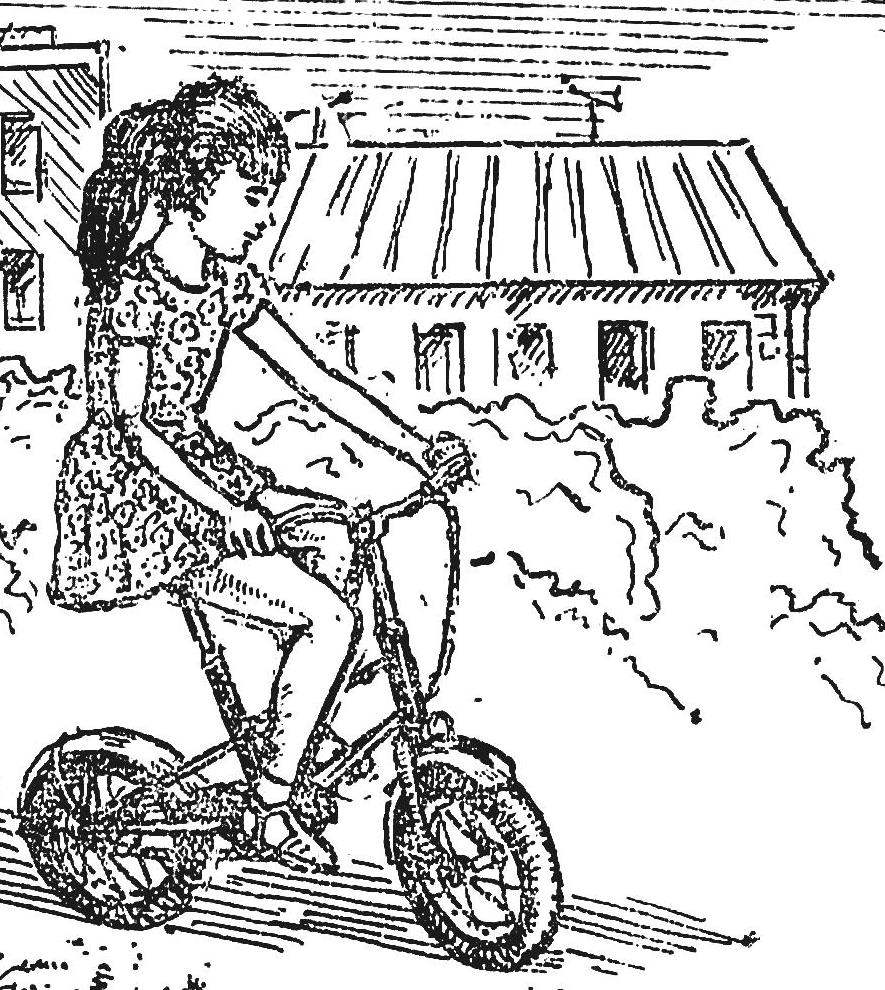 For a man, far from technical creativity, the expression “reinvent the wheel” has a negative connotation: a waste of time, repetition of already traversed. However, the designer-Amateur gives it a different meaning. He rightly believes that nobody is perfect that new technique you can even find on the beaten road, and continues to look. …Muscovite Vyacheslav Kabatov came to the editorial office with his seven year old son. They brought a bike that… Well, him.
Children’s Bicycle “Misha” — design reliable and even comfortable. My son will not part with him all summer. But in the winter, “Mike” irrelevant, gathering dust on the mezzanine. I thought I could fashion it into some kind of winter. A variant of the ski of the snowmobile was presented the most suitable. This was quite the front fork to replace the console with two children’s plastic skis, and the rear wheel to wrap the old wire — snow-hook.
Skiing in the console originally had one degree of freedom — swinging only about an axis perpendicular to the direction of movement. So riding across the slope was difficult. Had to put ball joints that provide two degrees of freedom, and an independent spring suspension. When the opportunity came to manage and nylon snowmobile, it immediately went smoothly. In addition, the stiffness of the springs is adjustable depending on rider weight and snow conditions. 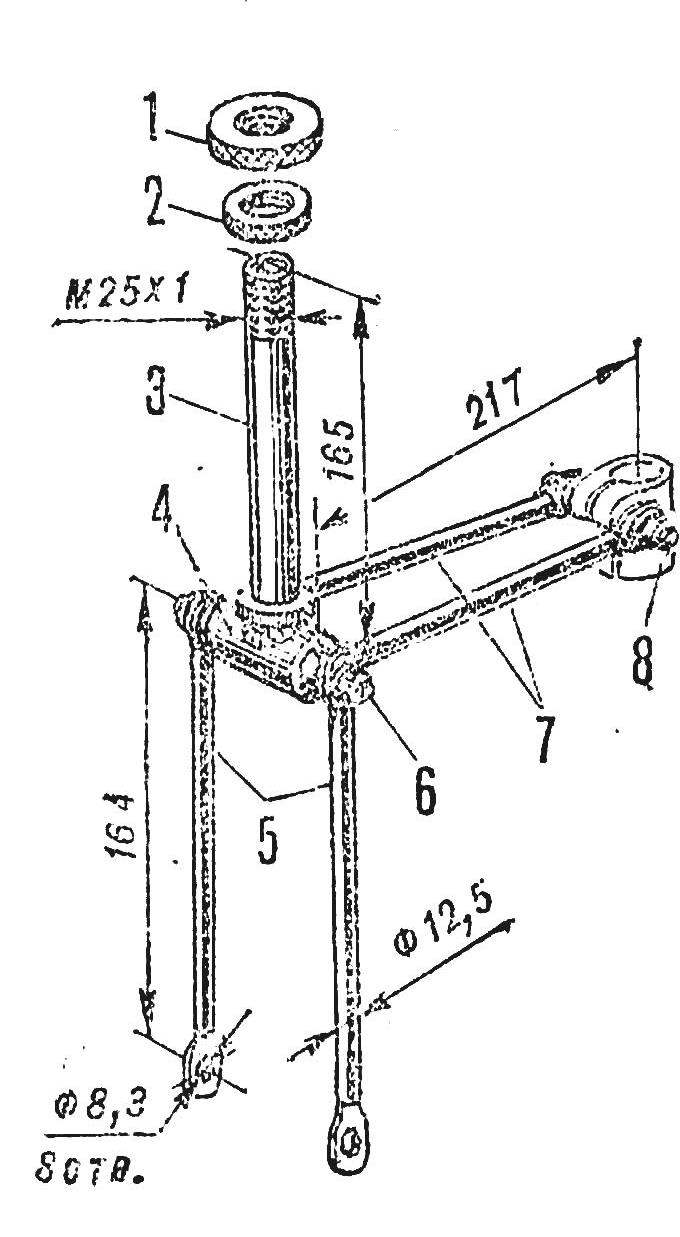 Fig. 1.A connecting node of the tandem:
1 — nut М25Х1 2 — the upper thrust bearing 3 — front,4 — carriage,5 — vertical thrust and 6 — axis carriage 7 is a horizontal pull,8 — pin M8.
The prefix consists of an axial pipe ø 27 mm, which is inserted on top of a Bicycle wheel. The lower end of the tube plugged with steel plug with two through holes with an M10 threaded hole for fastening screws of the brackets, which are located in the axis of oscillation of the shock absorbers and levers with skis.
Each spring wrapped around the rod, one end of which is retained the retaining screw in the small end of the shock absorber and the other slips inside the big head. Threaded rod — nut and knurled nut for adjusting the spring rate.
Levers — of the tube d 19 mm. At the ends of each are pressed (and fixed by pins ø 8 mm) tip and the ball support, and in the middle riveted bearing plate for small head. Ball bearings equipped with retainers ø 8 mm, which prevent the turning of skis around a vertical axis. Stoppers are included in the grooves of the cylindrical cups fixed to the ski. These grooves are oriented so that PSL provide a toe ski 3-5 °, which increases the handling of the snowmobile. Opera ball held in cups with lids and are closed to operate canvas covers.
Mount the ball joint on the ski performed as follows. The glass is bolted on a rectangular Board with four M4 screws with countersunk head (bottom). The Board itself is secured by two screws and a plate salatnoy in the holes for the straps in skiing (front). And behind under the charge planted three nuts, which from the top through the Board and from the bottom through the ski screwed the screws, pre-heated soldering iron. 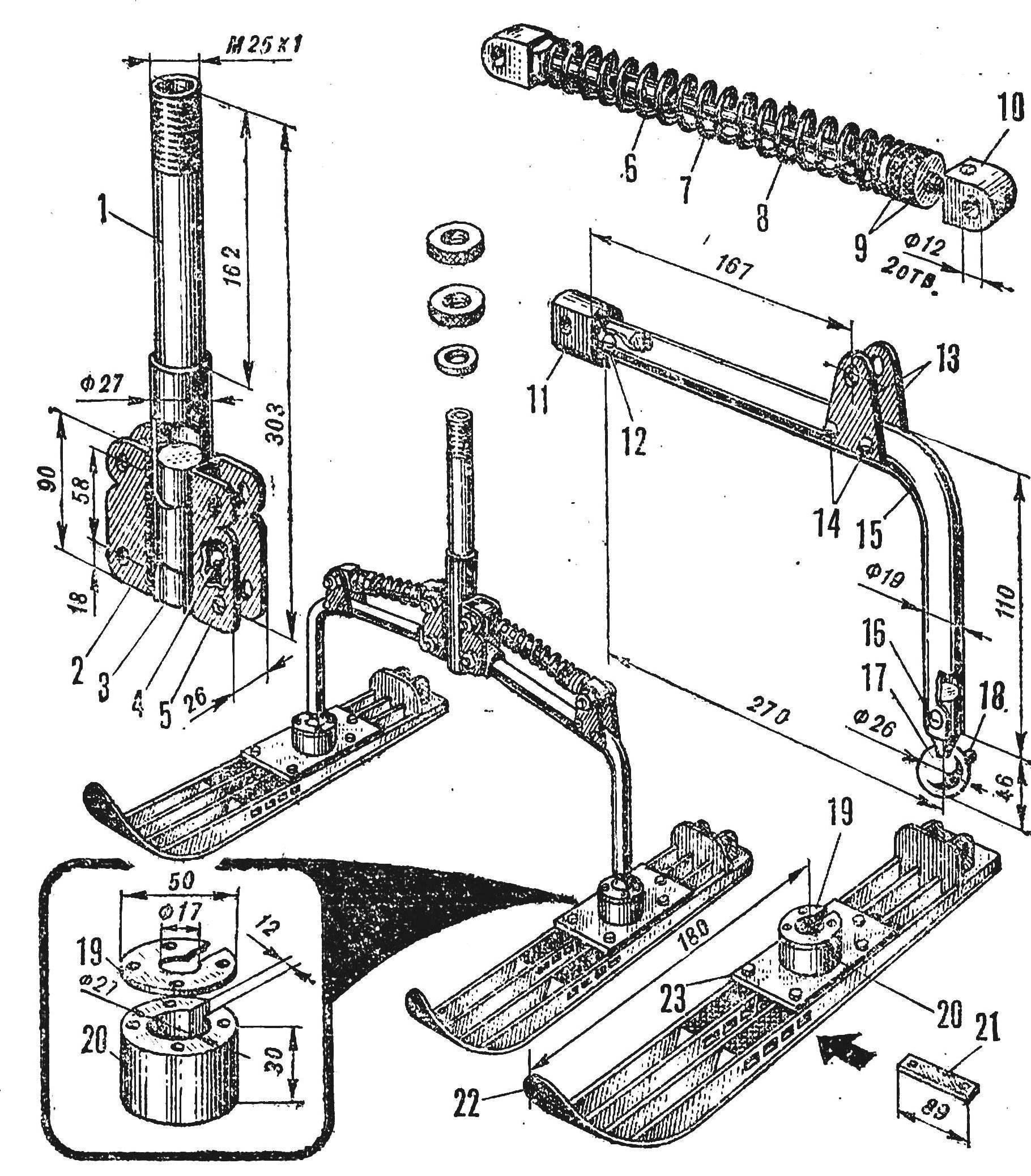 R and S. 2. The design of the console:
1 — axial pipe, 2, 5 — bracket 3 — stopper 4 — screw mount bracket, 6 — large head isolator, 7 — spring, 8 — rod, 9 — Ganka Adjuster and locknut, 10 — small head with locking screw, 11 — lug, 12, 16 — pins 13 thrust plates 14 and rivets 15, and lever 17 — ball bearing, 18 — axis stopper 19 — cover, 20 — Cup ball bearing 21 — mortgage plate, 22 — ski, 23 Plata.
Independent spring suspension allows the ski to replicate the terrain and to enter the turns as the bike is tilted to the inside of the turn. In addition, it absorbs well and gives a smooth course.
* * *
However, this metamorphosis “Misha” has not been exhausted. Grown up my daughter, and she also wanted to ride a bike. And what do you start with beginners? Usually with drops. To avoid them, and quickly to teach my daughter to ride, I built a tandem. The son took a seat in the front seat and gladly took my sister around the yard. She had to spin your wheels. Learning to keep balance, she began to ride independently. And tandem is now entertainment for the neighborhood children.
Here’s how it works. Two serial “Misha” mated with a knot, which is made of outdated bike frame. Stand with the carriage and the axis is at the bottom of the seat tube, and thrust — cuts thin tubes of the frame. Steak cut to 105 mm, machined to 25 mm on a length of 162 mm, and the top is threaded G L25 X1. The axis is removed from the carriage, and all her dowry of cylindrical form under the M8 thread length 14 mm. Then it is inserted back, and it screwed lugs horizontal and vertical rods.
From the front of the bike crushed the trunk. Instead it installed a vertical thrust to the docking station. Horizontal rods are attached to clamp the seat tube.
From the rear of the bike lifted the front wheel fork, steering bushing it worn on the front of the docking station, installed the wheel. The axes of all three of the carriages substantially parallel to the tandem had a strictly one equilibrium position. And again, in the driving wheels tandem mounted hubs and brakes off of a Bicycle “the Schoolboy” — for greater reliability.