The idea of creating a mechanical assistant for the treatment of garden I came up with long ago. Looked appropriate magazines “modelist-Konstruktor” with the description of the tilling tools and came to the conclusion that on the basis of the available I have the power unit and the control levers scooter “Electron” is it better to motoliberty.
The motor power 5.5 kW (7.5 HP) altered ignition: instead of generator set, magneto, securing it on the housing of the cooling fan. The drive from the impeller. Knew about this ignition system and the work more reliable, and maintenance easier.
Torque from the power unit is transmitted to the drum wound a rope, the end of which is fastened to the plow. Transmission chain, the details I picked up from discarded machinery. Sprocket (g, on the output shaft of the power unit) has 14, and the guest (gg on drums) — 45 teeth, gear roller chain— PR-15,875. The diameter of the drum under the cable is 180 mm.
The design is of small size and weighing only 60 kg. Out of town on the suburban area I drive her by car “Moskvich”. Motoliberty put in the back seat, and plow-cultivator together with the disconnected steering wheel in the trunk.
His motomania I am satisfied: it allows not only to plow but to plant, hoe the potatoes, to cultivate the garden. Lock the winch in place provides a pivoting anchor with two welded bayonets. 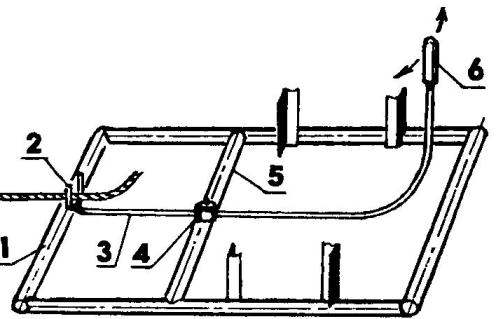 Crookedy:
1 — base motoliberty; 2— plug; 3 — the lever (steel water-gas supply pipe 21,25×2,75; length of the forearm lever is specified at the place); 4 — hinge; 5 — bar (steel water-gas supply pipe 33. 5×3. 25); 6— handle
Now about the features of the design. The base of motoliberty welded steel pipe with an outer diameter of 33.5 mm. is attached To the base of the motor frame from a steel angle 35×35 mm with a power unit of the scooter. And to prevent the occurrence of undesirable bending moment (tension of the action chain of transmission), to the support structure motoliberty added emphasis.
The base is also attached stands drum with bearing hub and adjustable cosine, additional the purpose of which is to be an integral part of the tensioning chain (in conjunction with a special device in the rear suspension of the power unit). 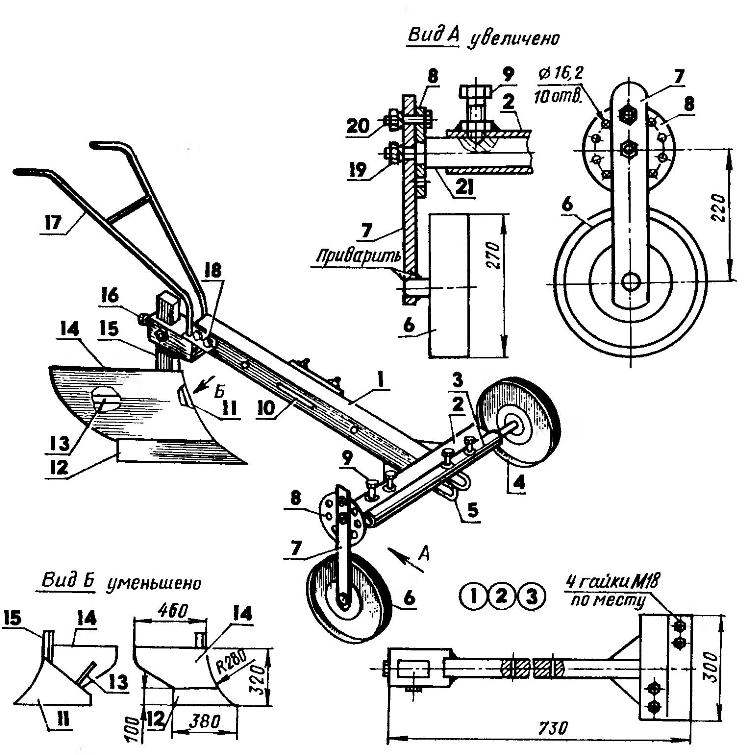 Towed plow-cultivator:
1 — beam (charged cultivator, cropped); 2— guide retractable axle supporting wheels (steel pipe of square section); 3 —axis guide rail wheel (steel water-gas supply pipe); 4—field wheel; 5—the Central lug (2 PCs); 6 — borozdna wheel; 7—wheel; 8 — the depth Adjuster; 9—locking screw M18 (4pcs.); 10 — clamp; 11 — field Board; 12 — shield; 13 — spacer strap; 14 — blade; 15—; 16 — locking screw M16 (3 PCs); 17 — steering wheel (steel water-gas supply pipe 26,75×3,5); 18 — bolt M12 (2); 19 — nut M16; 20 — bolt M14; 21 —retractable wheel axis borozdna (instrumental hot rolled square steel)
Swivel anchor, bury in the ground, is a U-shaped frame steel area 45×45 mm, with two welded bayonets. With motoliberty anchor pivotally connected by bolts. Hostility from ordinary steel shovels. When you install the winch in the desired location of the parcel assistant comes to the crossbar of the U-shaped frame, pushing into the ground with bayonets, which creates a reliable grip motoliberty with the soil.
For even winding of rope on the drum is crookedy. He plays the role of a limiter that does not allow slipping off the winding drum. To the base is attached to the crossbar. Hinge with an attached arm crookedstar with fork cable and handle. Length shoulder crookedstar selected so that lever handle “walks” between the uprights of the motor frame and the fork with a rope between the cheeks of the drum.
The controls motoliberty displayed on the handle on both sides of the engine frame. Left clutch lever and button dinosaurer, right grip throttle, lever a richer fuel mixture and shift lever.
The design of the towed tillage equipment universal; the plow can be supplemented plough body, working bodies of the cultivator and Hiller.
The most important stage in the work — the first pass. The rest, they say, a trick: the plow will copy the line of the first furrow, following rolling over her borozdna wheel.
Based on this design, the beam from the charged to the cultivator for continuous tillage. It is cropped, and there are welded two rails: one of the square tube with a sliding axle borozdna wheel, fixed with two screws M18, the other from a pipe of round section with the retractable axle wheel. Wheels with a diameter of 270 mm from the charged to the cultivator for inter-row cultivation — Aubrais-sinenkie self-cleaning.
When the changeover towed plow to cultivator option is disruption of the housing is mounted hoe, and under the clamp on both sides — shaving legs. To reach under the frame of a large lumen have to go to attaching the rack. But, pushing the wheel axle from the frame, you can set any distance between the wheels. During cultivation the cable clings to the Central lug, and plowing the side. The depth of plowing, in addition to the described method, it is possible to adjust the mount housing.
The body copied from a well-reputed of a plow horse. The blade is made of steel sheet thickness of 3 mm; the blade cut from the blade, and the front — foot razor cultivator. Material for the manufacture of field boards and the spacer strips was 5 mm steel sheet.
As a booster used the finished arm from the same single hull of a plow horse. But you can settle for a homemade welded construction of steel water-gas supply pipes. Mount — at the rear of the beam by bolts M14.
As previously published analogues (see, for example, “modelist-Konstruktor” № 9’81, 3’89, 6’90, 4’94, 2’95, 8’95 and 1’97), my winch has advantages over the usual tillers. It is easier, safer and more versatile. And most importantly, gives you the opportunity to handle the garden straight from the fence, leaving the turning lanes. Yes, and tamp the soil. Per hour this motoliberty you can plow five acres at a cost with less than one liter of gasoline.
A. NEGREI, alexeyevka, Belgorod region.