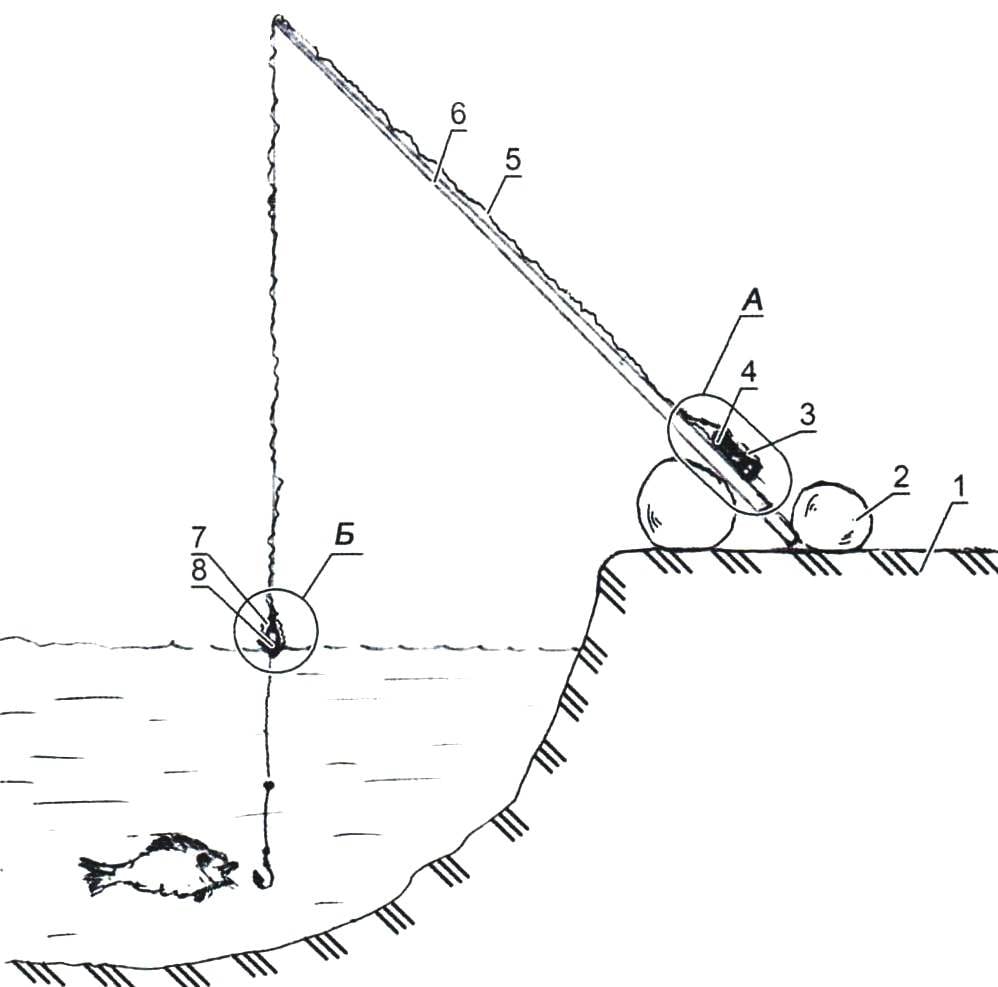 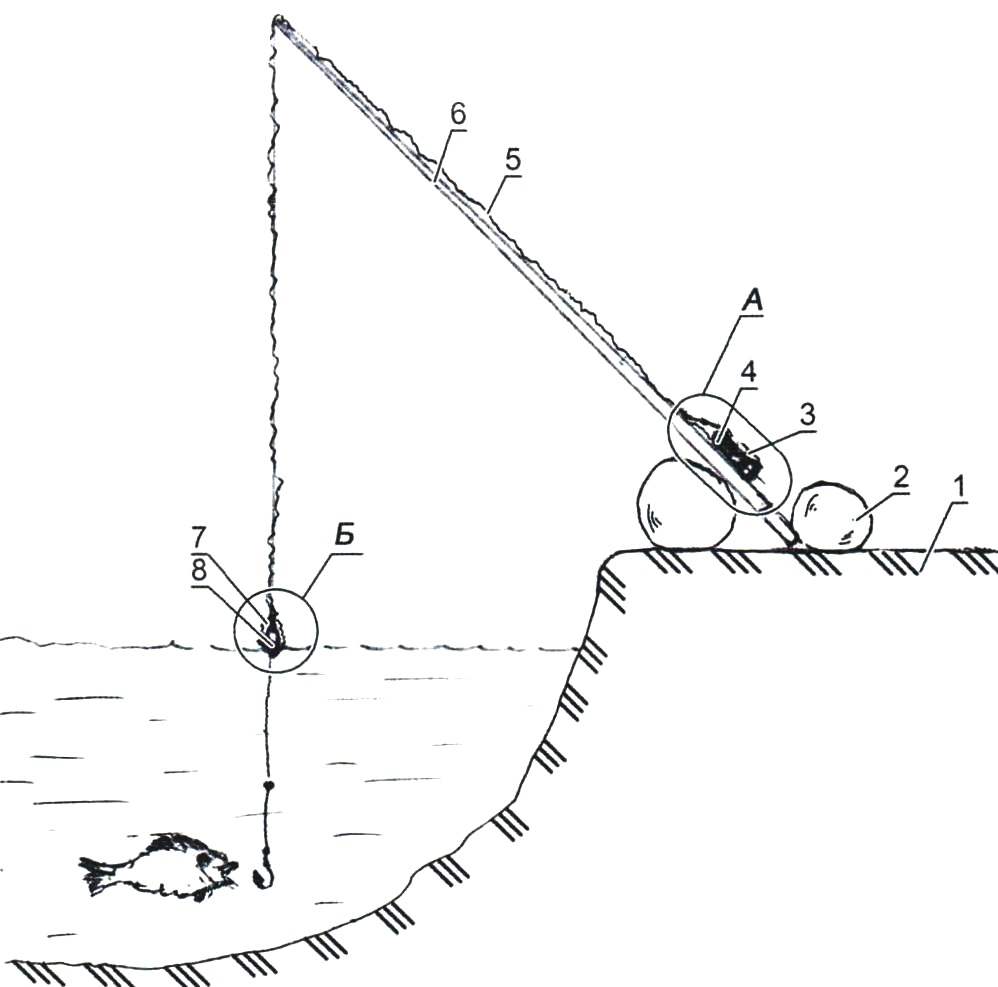 Many are addicted to fishing for them this activity is a fascinating vacation. The very same UDA, rod, adise is one of the oldest fishing gear; by definition of V. I. dal’s dictionary, it is “spun horsehair forests, with one (or more) hook, which is sometimes linked to special powada; hook is attached above the sinker, above, depending on the depth, the float, the upper end attached to the rod, the shaky stick”. However, progress is inexorable. To replace the forest horsehair came nylon fishing line, floats of nylon and become electrified. Improving manual fishing gears and devoted this article.

As an avid fisherman, I can say: the visibility on the river or pond, the sun drops, and the float becomes difficult.
Extend the pleasure of communicating with nature, from fish, when it covers the twilight feed, will help improvised fishing rod with a lantern float. To make this fishing gear can be for an hour, with the rod (whip sizes), set of fisherman (fishing line, hook, sinker, float), waterproof glue called “Cold welding”, wire type sew-2 with a diameter of 0.12 – 0.18 mm, a miniature incandescent lamp (of 1.5 – 3.5 V and 0.06 and 0.26 A), two galvanic cell type “Mars” Yes the housing is an acceptable size. The task is significantly simplified if the three last components are ready to “Chinese” lantern.
Carefully disassemble the float, install it on the glue a light bulb. Of course, without the cap, after disconnected from it. Waterproof glue serves here primarily as a reliable means of sealing. 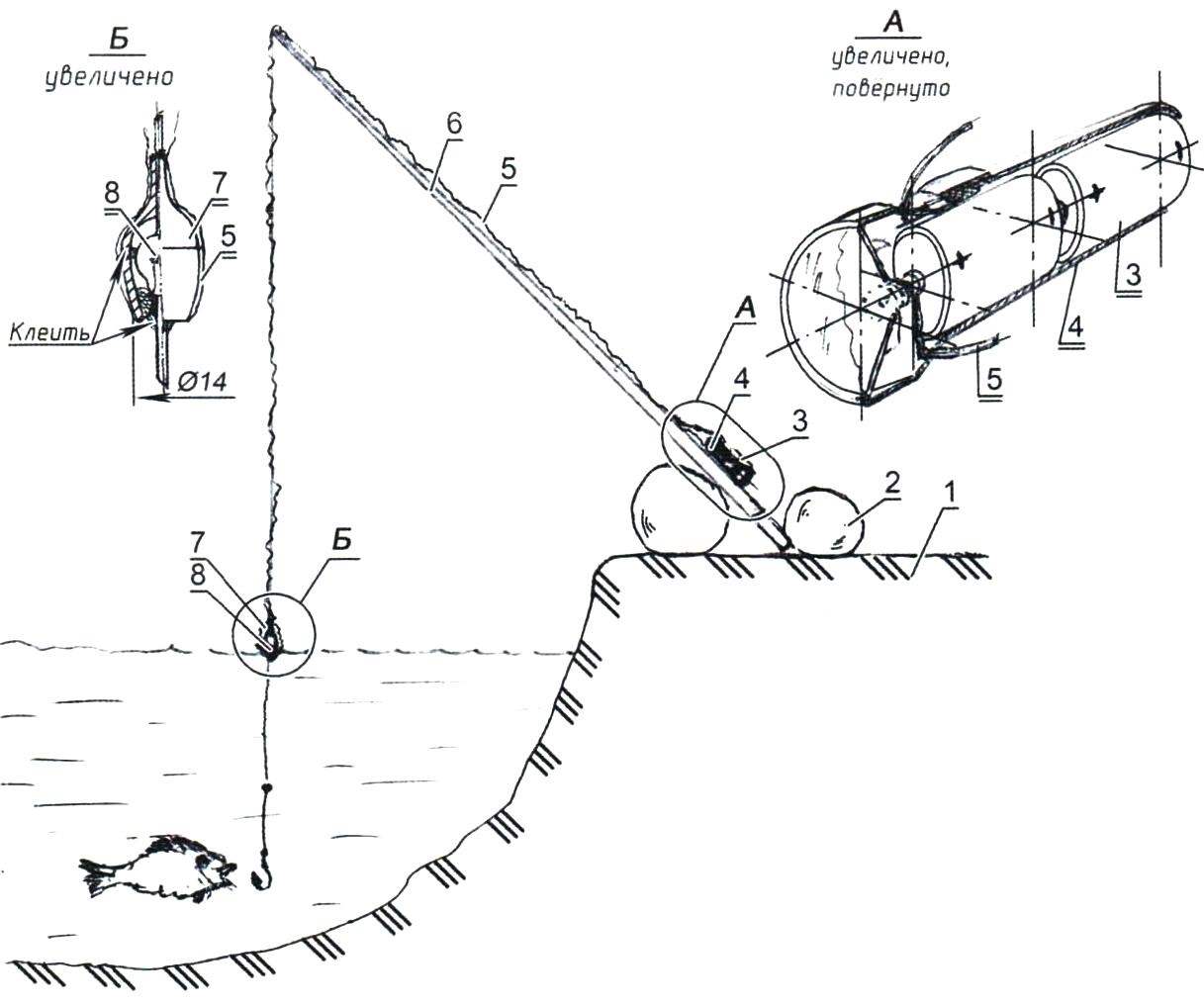 With such a homemade electric rods, right at the end of the day or night…
1 – beach; 2 – boulder (2); 3 – galvanic cell type “Mars” (2 PCs); 4 – the case of Chinese lantern; 5 – a wire PEV-2 (L at the place, d0,12 – 0,18,2 cut); 6 – rod (the whip of the right size); 7 – float; 8 – miniature incandescent lamp (2,5 – 3 V, 0.6 – 0.28 A)
To the bare conclusions of the filament podaite the ends, sew-2, Seitalieva their smear of the same adhesive. However, the latter precaution, according to the experts, – no more than the traditional “you’re gone”. With such a low voltage (real – less than 3 V) electrical contact with water is not a danger to the glowing bulbs, nor for the angler. But the fish so-called microflow leak along with a luminous float can be only stimulating and attractive. So, the likelihood of increased catch with this electric rods just guaranteed.
Vladimir ZORIN, the town of Khadyzhensk, Krasnodar Krai