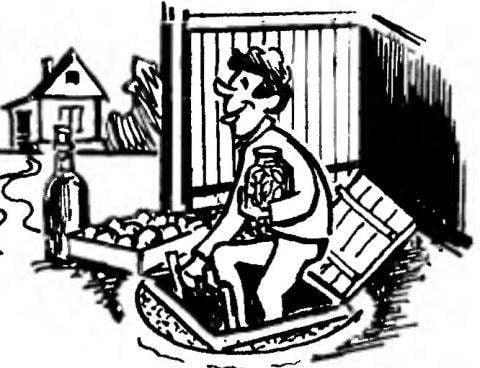 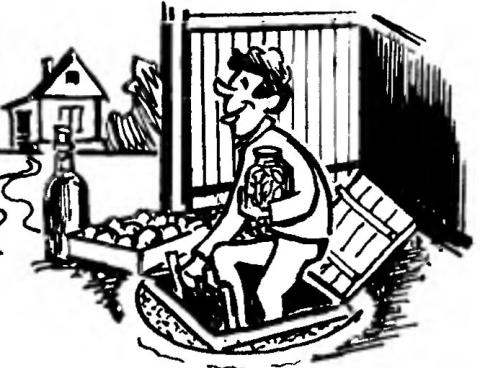 Ceramic jugs in the village are not uncommon. Apparently because of the cheapness and practicability of vessels of baked clay, in which water almost months remains prohladnenskiy, and dairy products long do not spoil. They say that in bolsaescola buried in the neck in the ground and tightly sealed jars, it is preferable to preserve even home “wedding” wine. But to use them as a vegetable store…
We were surprised by such an unusual solution to a new neighbor — a native of the Krasnoyarsk territory. However, he built his own vegetable store-no jugs in Potter’s clay followed by firing, and of brick. Technology brought to a fairly simple, familiar to most of the villagers operations.
It all started with a pit. In form it is a truncated cone, leaving a smaller base (diameter: 2.8 m) into the ground at 3-m depth. The diameter of the pit upstairs— 3.2 m. these dimensions freely blended vegetable store, a brick wall which is laid out in the shape of a jug with a neck-hole.
The soil at the bottom is sealed with a small roller with application of a certain amount of rubble. Added top 5-cm layer of sand, carefully leveled and compacted too. On the thus prepared base laid three layers of polyethylene film, and then erected a brick storage enclosure with reliable waterproofing.
Our neighbor-Siberian pre-made a large plastic cover-cylinder. Stretched on the outside wall of the store, he acted as a waterproofing layer between the brickwork and the side filling — first sand and then clay.
The walls are made of bricks (800— 900 pieces). To add the required ductility of cement-sand mortar added to the clay, which is soaked for 1.5 days before laying.
All seams inside and out in the process of laying carefully rubbed with a clay solution. As the wall had grown by another 0.5 m, the film outside clung to her, and the sinuses between the wall of the pit and brickwork was filled with sand and then seal. 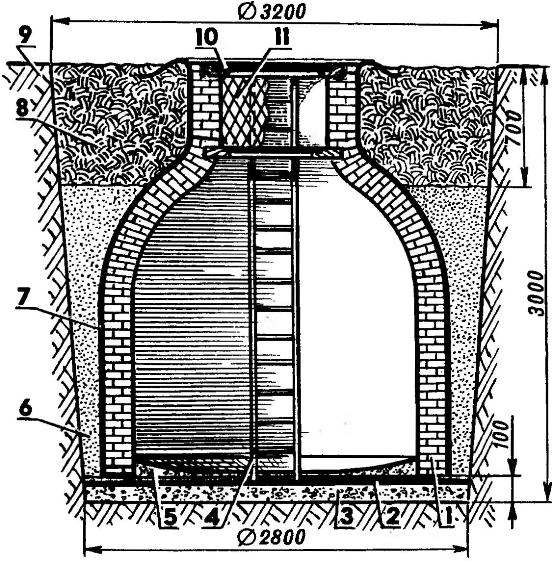 Growers pitcher:
1 — masonry (brick); 2 — waterproofing three-layer; 3 — base (gravel and sand); 4 — ladder; 5 – screed (concrete); 6 — filler (sand); 7 — waterproofing single-layer (polyethylene film); 8 — filler (clay); 9 — ground; 10 — manhole; 11 — insulator (mattress).
From about the 15th series of the radius of curvature of the wall began to gradually change, because the top of the arched vault. The bricks were laid first, with an increasing tilt toward the center of the jug-cellars and, respectively, with thicker mortar “bed” on the outside of the wall.
But with the 30th series of the radius of curvature of masonry was reversed so that by the end of the construction of the cap bricks took her former, horizontal position. The smoothness and evenness of such a transition is verified with a tape measure and a plumb. Although he could help and the templates cut from plywood, orgalitovoj or wooden shield.
On completion of laying all the seams were carefully rubbed with a piece of burlap. And the walls dried and prepared to wash the inside.
Dual manhole made of ie wood. The best material for it— pine or larch. They are quite moisture resistant, moreover, to retain the heat. And to prevent freezing of the upper part of the cellar, even when the fierce cold, the added thermal protection of dry sawdust in the mixture with a small amount of quicklime. The latter is necessary to scare away the mice. To protect the store from frost and helps the mattress (mattress), full of small wood chips and sawdust. Such a thermal insulation space between the upper and lower lids of the manhole.
The floor in the cellar betonieren with a slope to the center. The thickness of the reinforcing layer is of the order of 15 cm. Proportions of concrete: cement M400 — 1 part, sand 2 parts fine aggregate to 4 parts.
After hardening of the concrete coating the entire inner surface of the vegetable storage-jar was whitewashed with the addition of copper sulfate.
As practice shows, such growers pitcher it is advisable to place under the garage or other building, to provide additional thermal and moisture protection.
Any special ventilation in the winter is not required. In the summer, enough to open the hatch.
J. VASILIEV, Khmelnytsky region.