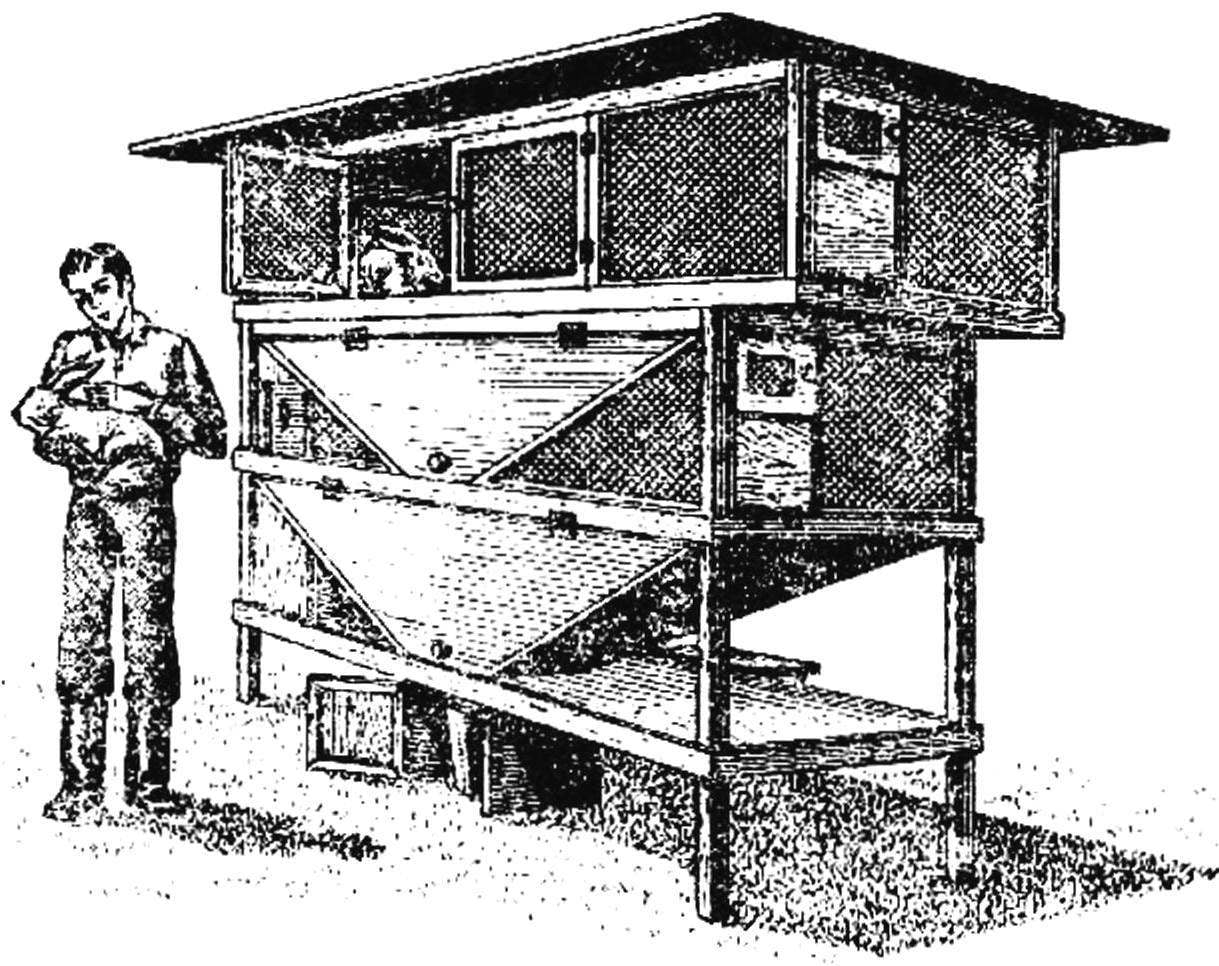 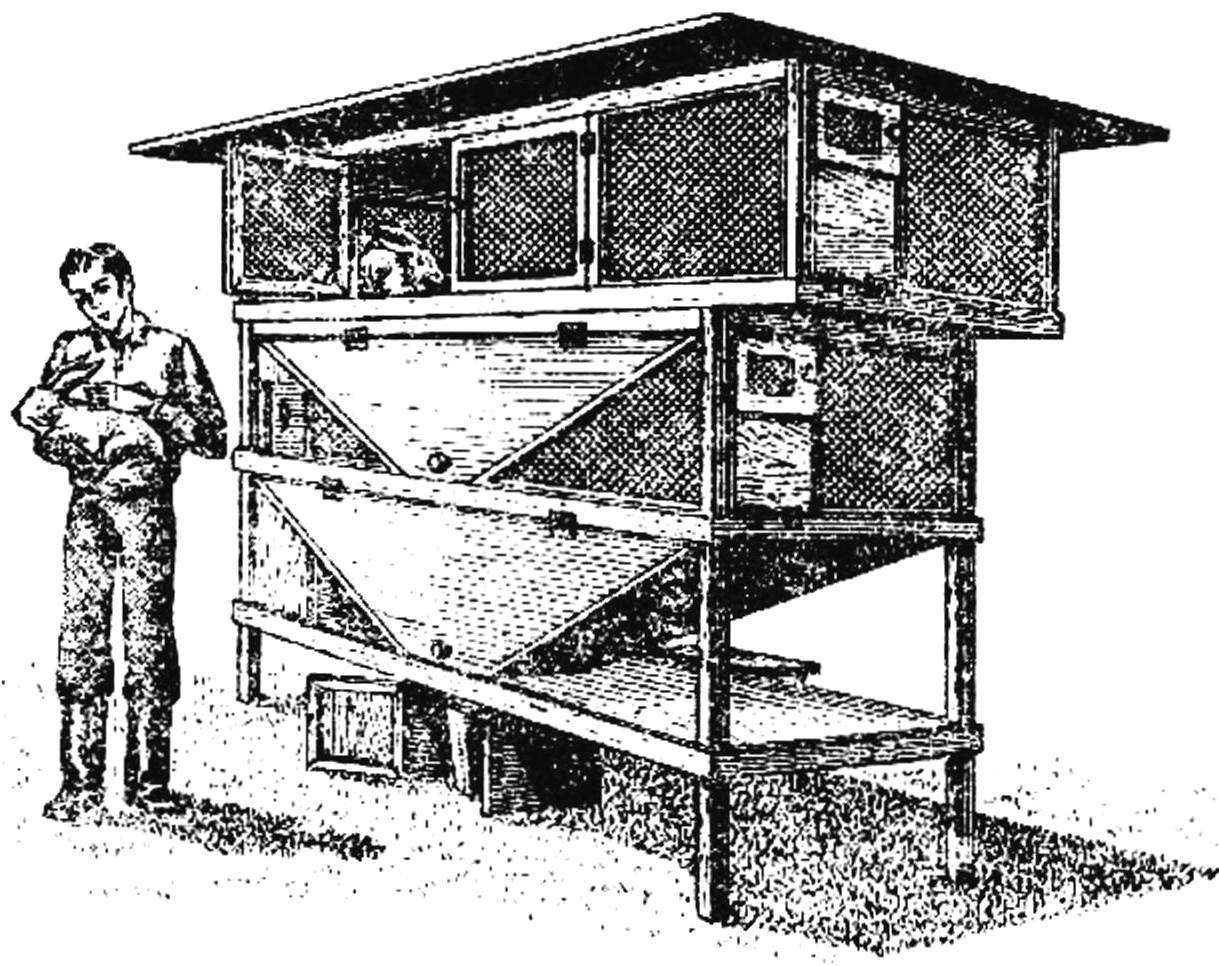 Many interesting developments have been conducted of the Komsomol all-Union competition of means of mechanization for agriculture. Under section livestock unanimous approval of the jury got the rabbit design mini-farm presented by production Association “Nevskaya Dubrovka” (Leningrad oblast), which produces furniture. Development plots for industrial enterprises and organizations is known to be an integral part of the Food program, adopted at the may (1982) Plenum of the Central Committee of the CPSU. In “Nevskaya Dubrovka”, assess their capabilities, decided to breed rabbits.
Isn’t it risky was that decision, when you consider that often even specialized rabbit farms are unprofitable? No. The Association had the results of years of experience and original designs of cells known breeder and inventor Igor N. Mikhailov, who gave the assurance: in the first year the construction of the farm will pay off and it will be profitable.
A few words about Mikhailov. Man he is a very interesting fate. During the great Patriotic war was an aircraft mechanic. In the peaceful years he graduated from the theater Institute, acted in more than hundred films. Was fond of sports, he entered the correspondence Department of the Institute of physical culture Lesgaft. He played for the national team in trap shooting, became master of sport, then coach. And — it is necessary to stress that in all these different occupations he has been successful not only because of his abilities, but also special research, more inventive approach to any subject of their Hobbies.
The same happened with the rabbits, which he started to breed first at his dacha. Studying the special literature on these animals with beautiful skins and tasty, tender meat, Mikhailov carefully read temesta where one writer contradicted another. As a result, it uncovered several biological paradoxes inherent in the physiology of rabbits. And then found the best way their content embodying it in the design of the bunk of the cell (protected by the copyright certificate № 782773).
What characteristics of growing rabbits “Mikhailov”? First of all, to not fear the frost. One perceptive author in 1913 noted that “frost is the only best breeder””. And reveals this paradox is simple: the rabbit very weak lungs. They weigh just 35 grams, whereas, say, a rabbit of the same size — 500 G. In a warm place for the rabbit is not enough oxygen, which is much more in the cold. Besides, in the cold critters, annoying insects don’t carry disease.
On this basis, Mikhailov and developed the design of the cell. He decided to insulate only one female (the Queen), placing the cell itself in an open area. The device of the cells is very simple. This is an ordinary box without a lid, the bottom is of galvanized iron. Bottom five layered plywood pressed medical heat pad EG-1, and placed on top of a bit of hay. For 10-15 days prior to kindling the liquor put in a cage, and for two days through a transformer a heating pad on low mode supported 5— 18 days depending on the temperature: before birth, he is, ka itself insulates the socket, pulling out from his skin down. In such circumstances, no newborn rabbit (and they are born hairless and blind) doesn’t die, although the experiments were carried out with a very strong frost, to -47°.
Take into account the instinct of the female, directing it into the hole. Obeying him, the rabbit only settles in a low spot, so the ovary is located below the General floor level.
To rabbits grew faster, the inventor has created a device for heating (in winter) water, taking regular trichromacy boiler on 220V and step down transformer. And another trick: the water Mikhailov turns the neck down and locks in this position between the two plates. So in winter, rabbits can drink water warm, round the year in plenty and a bowl, with an inverted canister, is always full.
On its own decided the inventor and the problem of food animals. He has provided in the cage hopper feeders for feed, feeders for roots — and all this with the expectation that rabbits could eat at any time of the day. Because unlike other animals they have the stomach resembles a plastic bag: it’s not the muscles that push the food can only the new portions. Why rabbits eat little, but often — to 70-30 times a day. This requirement must satisfy.
Was considered by Mikhailov and the fact. Nearly half of rabbits, too early torn from mother, dies. So he otsasyvaet animals from females in 30-45 days, as usual, and 80-90. As a result, however, the female is only three or four breeding instead of eight, but it is advantageous because all rabbits survive.
— Since you were organized farm “Nevskaya Dubrovka”, — says Igor, — a year passed. It is possible to draw some conclusions. The national average on 1 kg of weight gain consumes 16 kg of feed, and on our farm — 3.5 kg. the rabbit reached a weight of 4-5 kg, usually require eight months, and we have only 120 days. Loss youngsters usually make up almost a third, yet they are virtually eliminated.
Industrial production of cells Mikhailov has not yet been established. But many rabbit-lovers (and they pass the major part of these products — rabbit meat and pelts) the drawing can try to do it yourself. This rabbit is not only suitable for personal use — it can be equipped while at school, at summer camp forces young technicians, contributing to the implementation of the Food program.
V. ORLOV, engineer