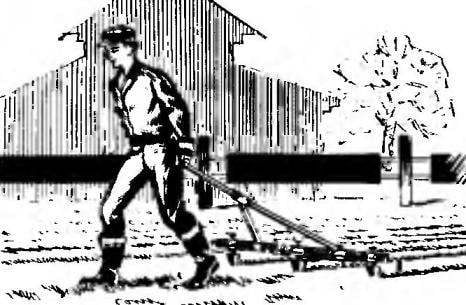 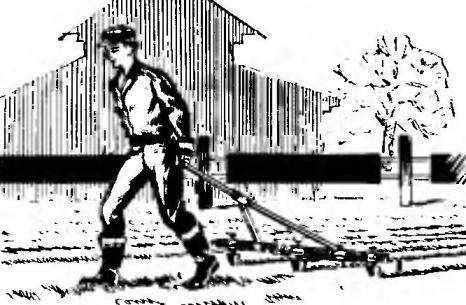 The experience of potato growers says the Dutch technology of cultivation of root crops is the most efficient, and the work is minimal. And rows of clean, smooth, and the harvest excellent. And the basis of all — well organized boarding and, of course, good equipment. I offer readers a short story about the technology and the design of small hand harvester — experienced assistant growers. It can make any novice homebrew.

After the garden is tilled, the entire area of the cut groove under the potatoes. For example, the same hand-harvesters. They throw seed tubers germinated better, but you can just rested 3 to 5 days in the light. Then between the grooves are a harvester or a plow-Hiller (development published in the journal “modelist-Konstruktor” No. 5’97) — and the whole potato is covered so that it requires farming.
Some closing seed instead of trying to combine or plow-Hiller to use a very common discs. But soon abandon them, because the soft plowing discs, cutting deep into the ground, turn huge clods.
And if the processing of the Shearer or plow, the tubers fall into favorable conditions, as surrounded on all sides by well loosened, soft soil. Speed and druzhnosti germination seed much ahead of the seedlings on the control plots of the old, classic method. Besides heavy rains “score” potatoes, planted “the classics”. Dutch method successfully resists the elements because the water is concentrated at the bottom, between the rows, the rows remain in perfect condition.
When the potato rises and there are small weeds need weeding. 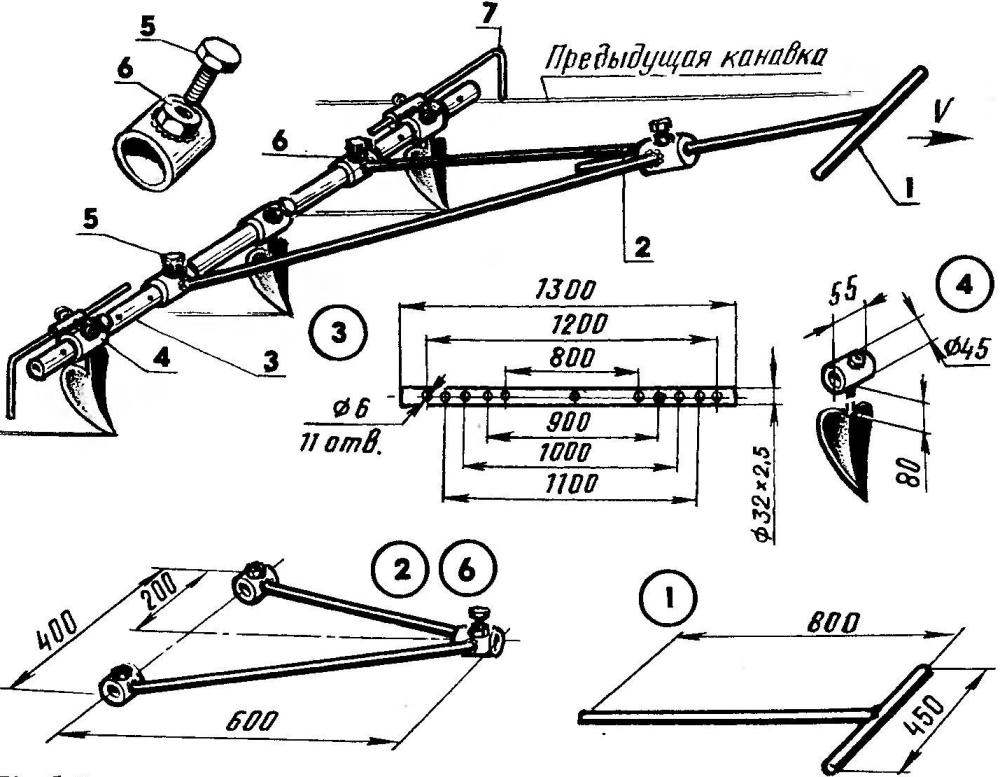 Reamer blade Kanawha-resonates.
Suitable for this purpose rake or cultivator (hoe), a description and sketches which have appeared in the pages of “Modeller-designer”.
Only weeds will not rest after some time will come out again. And when they reach a height of several inches, there could not do without plow or disc Hiller. Need to walk them across the field, leaving behind only smooth rows of potatoes. Its stems at the base slightly prizemlitsya the earth, and the garden immediately acquire a well-groomed appearance.
After a while hilling plantations should be repeated more thoroughly. The main thing — not to allow the weeds to colonise the entire field.
To dig the crop of potatoes by the Dutch technology is also handy. In addition, this operation is easy to mechanize.
Now about the processor. It is trehizbenka selhozgodu, which, if not tillers, pulling together. But with light soil and enough one person. The working parts of such a manual harvester replacement, fasten the retaining bolts to the suspension point. As the main use Lancet canadaontario similar to the above-mentioned plow-Hiller. You can get them ready (from discarded farming machinery) or manufactured from 3 mm sheet of high strength, wear-resistant steel on the attached scan. The depth of the groove will get about 90 mm, and a width sufficient for spraying seed tubers.
In places of connection of the beam is fixed with locking screws, allowing you to rotate the axis of the hinge relative to the handle and thereby ensure optimum (agronomic) penetration of canadaonlineviagra. Easily adjustable inter-row spacing.
On the axis of the hinge, on both sides of the beam are l-shaped markers with the Bush-screw-retained — a kind of beacons. Signal the end of one of them, extended to the required distance, moving during cutting of grooves and planting potatoes strictly on the previous groove. Harvester makes three new “bed” for the tubers.
Another marker (when first pushed) is used when the harvester is pulled in the opposite direction. This change occurs rather quickly at the bushings with a wire beacons provided screws”wing”. And bushings before welding are slightly bent to the handles of high-strength steel rod were in them with little friction.
You can, sliding and generally not using the handles, pull the processor so that one kanaloperator was on the previous furrow. However, will cut two grooves.
M. VALUY,
G. MENA,
Chernihiv region.