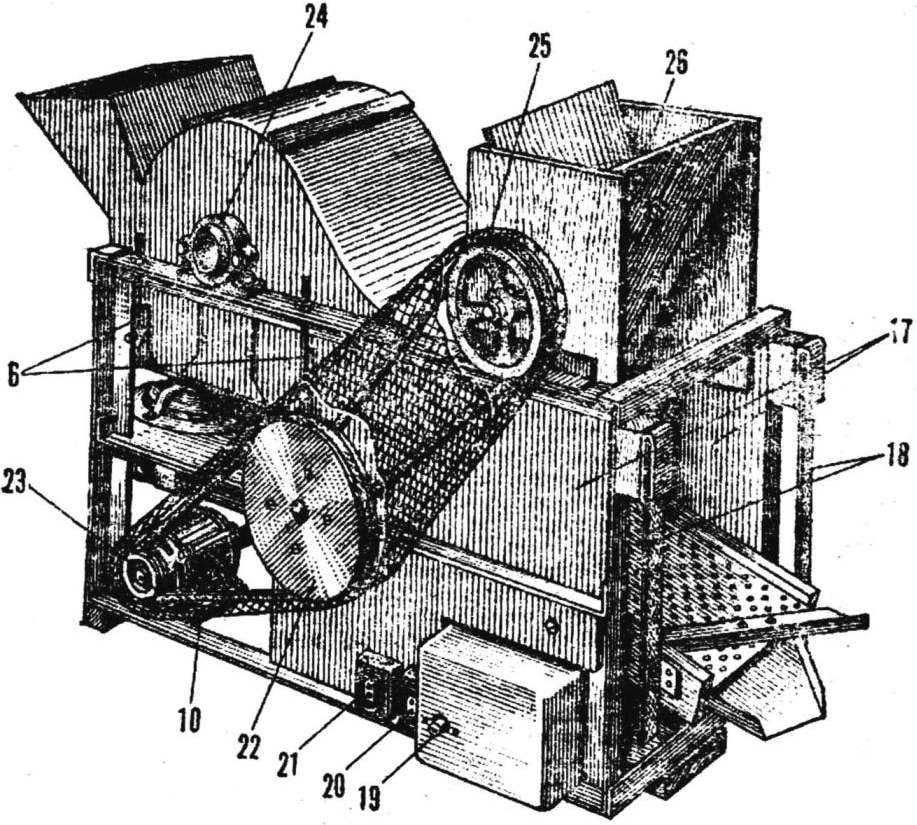 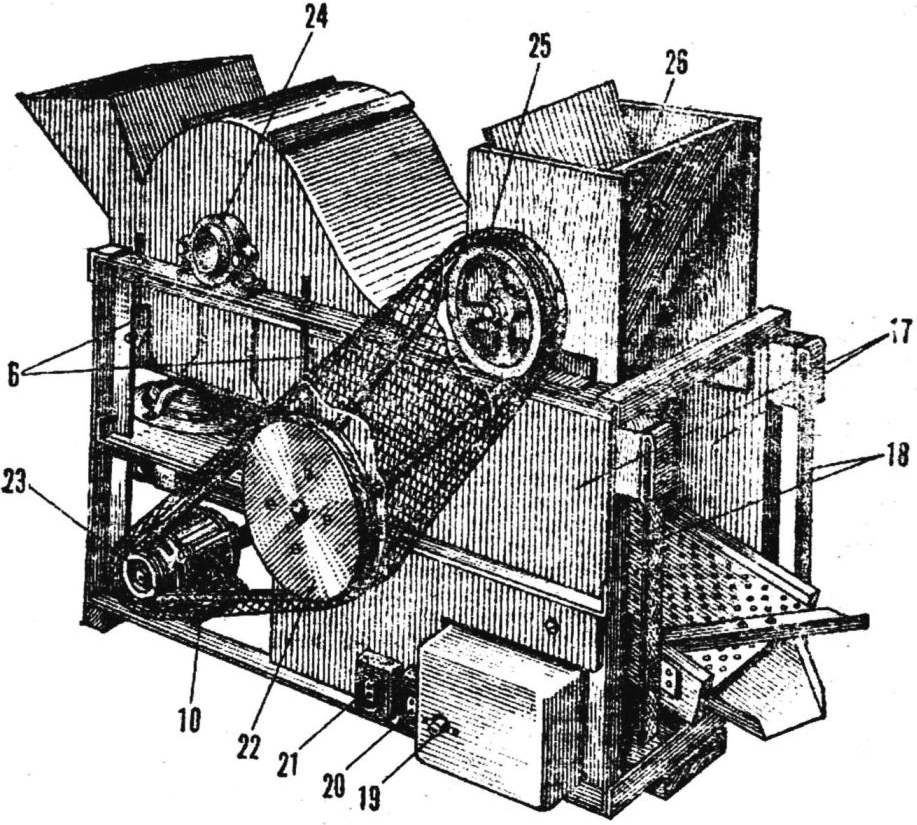 A cozy little Latvian village, curly half-hidden by the green trees, densely interspersed as flat as a table field. They are spaced from each other sometimes just for a few miles, as the village of Ruda and Nice in the liepāja district, and their life is closely connected in such a close proximity. As many students, after graduating from the eight, ninth and tenth classes have been going to the Nica — high school there. No wonder collaboration rudskoy and Nicky Yunykh TEKHNIKOV — harvester “thresher-winnower” — known as RN-1: capital letters in the title villages. Built this unit in the circle of mechanization of agriculture, which is headed by teacher, physics, drawing both L. A. schools Ditka.
Why did you come to design just such a car? The fact that it is not the school grounds in Ore students grow some crops (seeds then sown in a large area at a nearby farm).
To quickly process the harvest and to obtain sound propagation material, need a little absolutively unit. Therefore, there were RN-1, which has well-chosen components and parts such dissimilar machines, such as combine harvester, moped, vacuum cleaner, washing machine.
Built thresher-winnower the student of 10th class Ivars silenieks, his brother Andrejs, now the listener of the agricultural Academy of the Latvian SSR, as well as sixth graders at Bersimis and Valdis, Daugelis. RN-1 was awarded the diploma for the Grand opening of the all-Union week of science, technology and production in Vilnius, was exhibited at the Republican exhibition NTTM-82 in Riga.
The device processor is very peculiar. On the frame size 925Х565Х410 mm, collated from the corners of 40 × 40 mm, three layer, located above thresher and winnower, in the middle of the fan and block the sieves and the bottom of the drive motors and their starters. 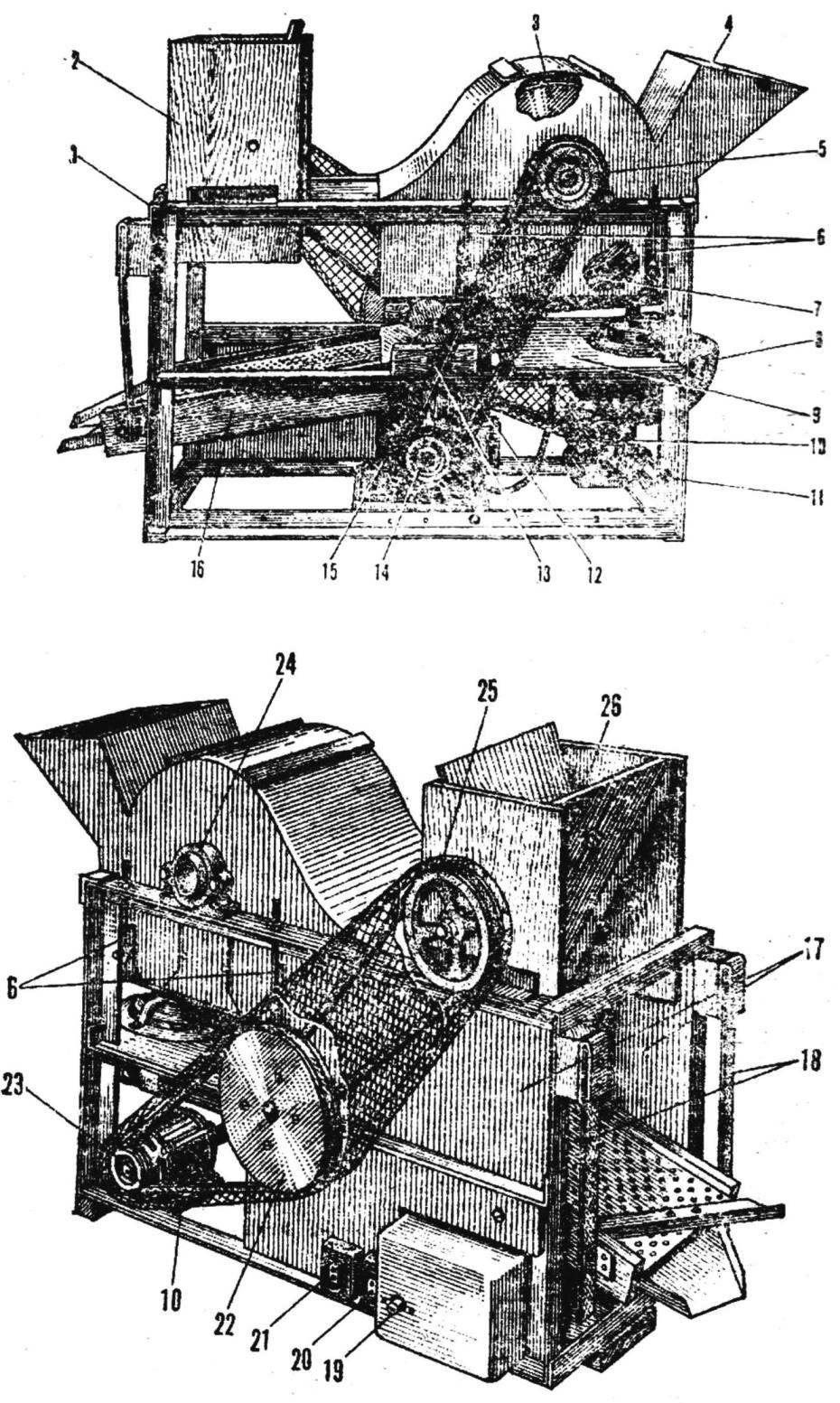 Thresher-winnower (guard of the pulleys to the walls of the tunnel winnowing conditionally withdrawn):
1 — frame, 2 — bunker winnowing, 3 — threshing cylinder, 4 — funnel, 5 — a pulley of threshing drum (Ø 105 mm), 6 — adjusting thrust, 7 — concave, 8 — fan, 9 — shelf, 10 — motor winnowing, 11 — a bolt of fastening of the engine 12, the belt guard, 13 — bearing, 14 — pulley grind (Ø 70 mm), 15 motor, 16 — unit lattice, 17 — walls of the tunnel winnowing, 18 — suspension unit of sieves, 19 — fan motor starter, 20 starter huskers, 21 — starter grind, a 22 — block pulley on the drive crank (Ø 250 mm) and a hopper (Ø 90 mm), 23 — a pulley of winnowing (Ø 70 mm), 24 — bearing reel, 25 — pulley hopper (Ø 150 mm), 26 — funnel hopper.
The design of the traditional grind: body, drum, deck, hopper. Body and funnel are made of desyatiletnego plywood and thin steel sheet. Drum of steel Disks Ø 300 mm, eight corners 25×25 mm and grooved oak pests.
DECA consists of a housing (the two metal sheets), curved according to the radius of the chicken wire with attached to it a six the same as that of the drum, whips and suspension system on the frame — metal rods, the ends of which are thrust adjustment. Changing with the last gap between the soundboard and pests of the drum, you can configure the unit for threshing of various crops, and to vary its quality.
The grind is two V-belts from an electric motor placed at the correct tier in the middle of the frame.
The threshed grain or seeds, falling through the net, get in a container mounted on a shelf under the deck. Chaff and other waste thrown by the drum from the gap between the last beach deck and the upper plating grind and fall on the sieve, where they are extracted by separation of the remaining seeds and grains. 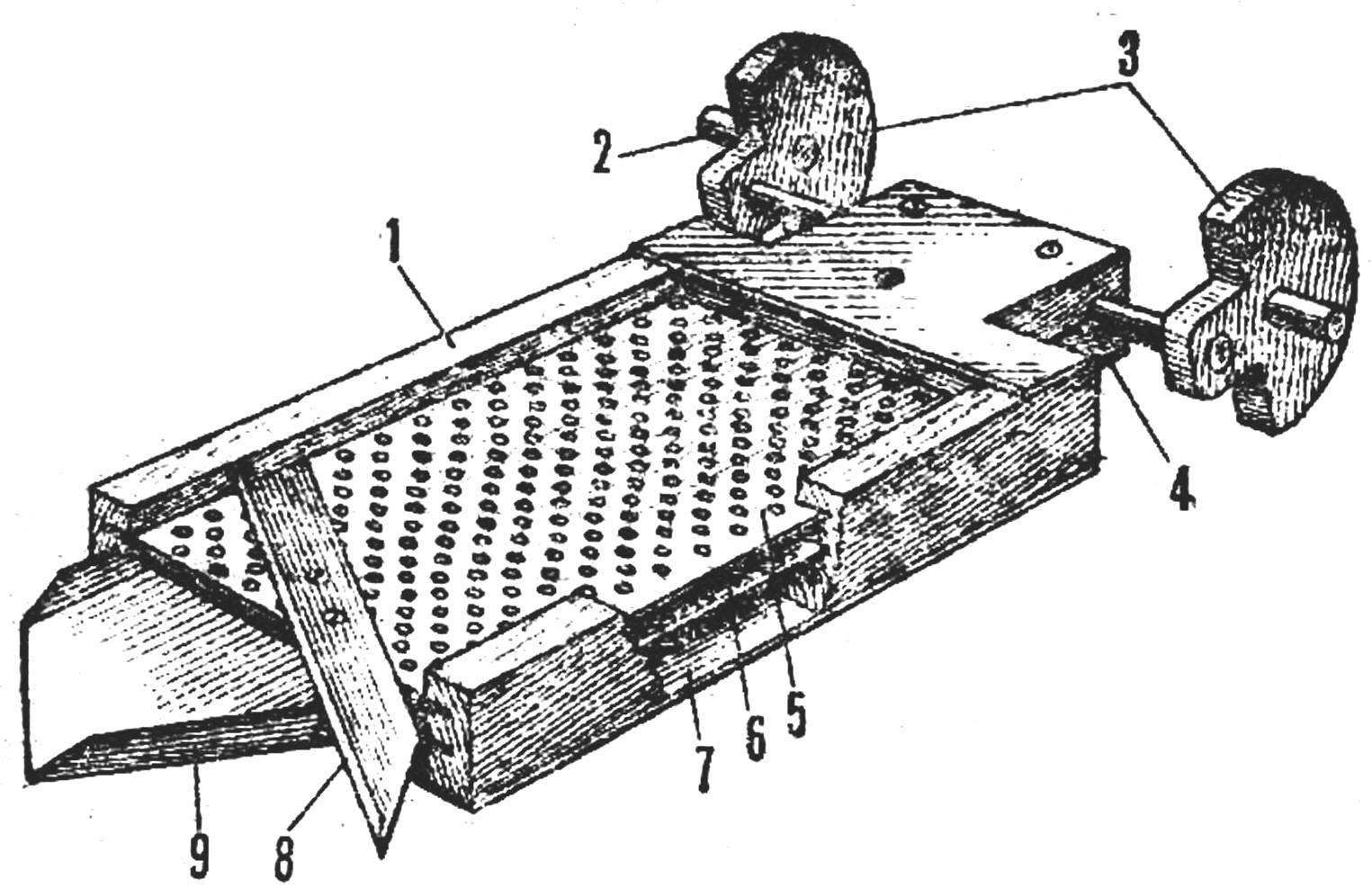 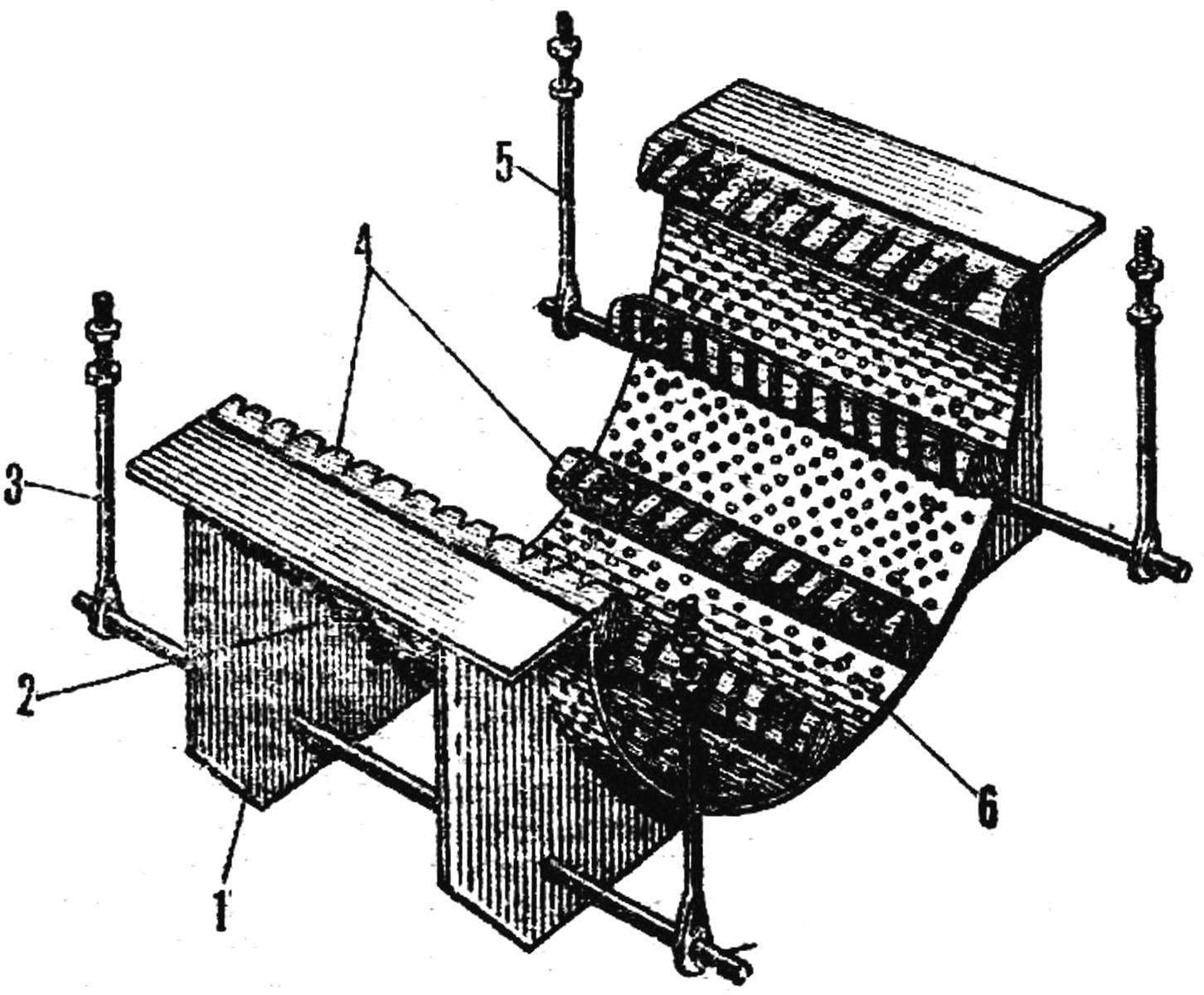 Deck:
1 — housing 2 — mounting bolts pests, 3, 5, 7 — deck suspension system, 4 — pests, 6 — sieve.
The unit lattice made like straw walkers of the combine harvester. Only two screens here: with holes Ø 3 mm (top) and Ø 1 mm (bottom). Underneath the tray.
In the upper part of the unit includes built-in bearing: stretch nylon tube rotates the crank counterweights from motors moped” lower part of the unit suspended on two strips of plywood that allow him to move back and forth. The separated fractions by the corresponding troughs fall in the substituted capacity.
The sieve is driven by an electric motor. From him V-belt goes on the large pulley of the crank. Beside this pulley is a smaller one, from which the other strap goes on to the hopper of a winnowing.
Now about how the bunker. It is made of plywood with thickness of 10 mm. Between two planks of the hull are flat funnel, the mouth of which the rotating shaft of square section with dispenser — wooden cylinder Ø 50 mm, having four longitudinal grooves. Rotating the dispenser captures the grooves of the contents of the hopper and equal portions pours into the mouth of the funnel, and hence on the sieve, where all is sifted. 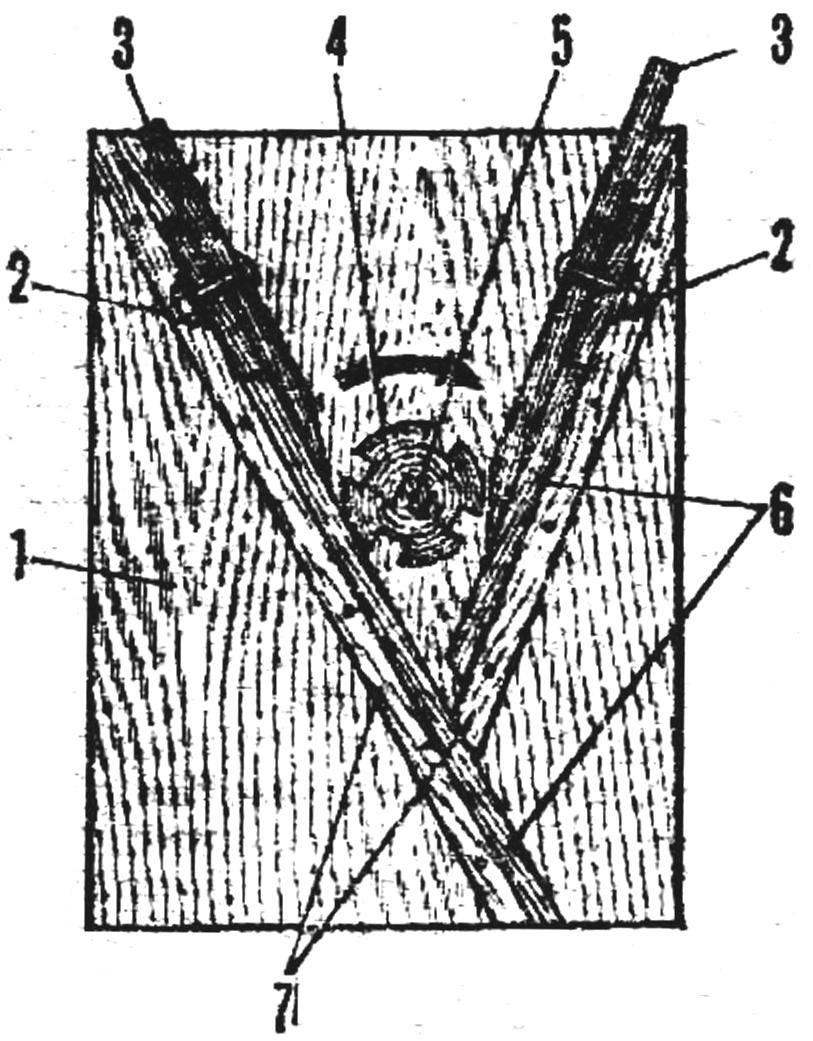 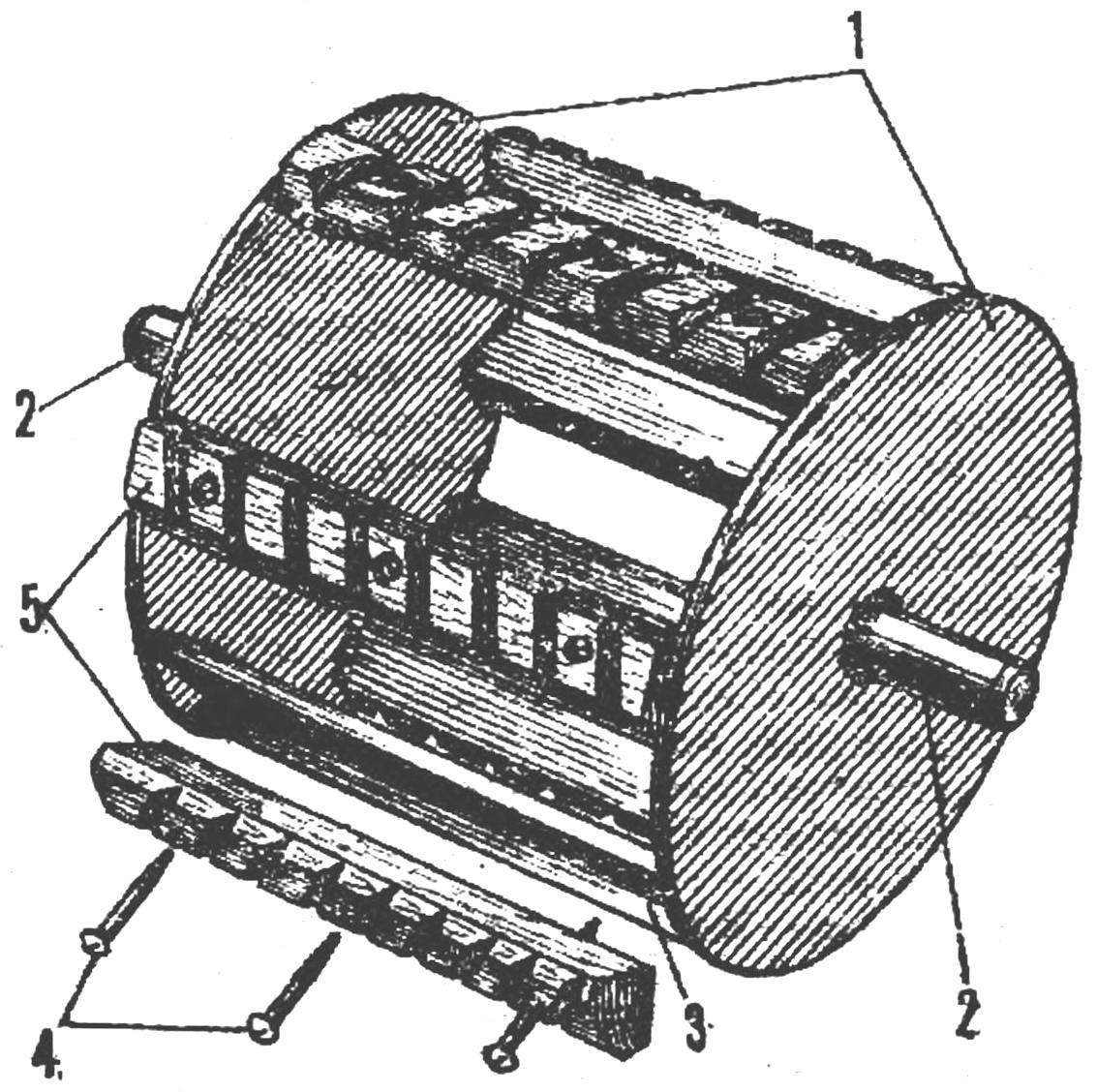 Threshing drum:
1 — drives 2 — axis, 3 — bed of the beach, the 4 — screws securing the beach, the 5 — pests.
If treated in the mass contains a lot of weed particles, it is possible to operate the fan which will drive a stream of air over the sieves and blow away the debris. The heavier particles fall on the sieve.
Tests showed that the fan works very reliably and with high quality, preveiwed even such a delicate substance, such as bee pollen. Early beekeepers chose the COP out of it with tweezers, and it took a lot of time. Now the need for such a laborious procedure is eliminated.
A. ALEXANDROV