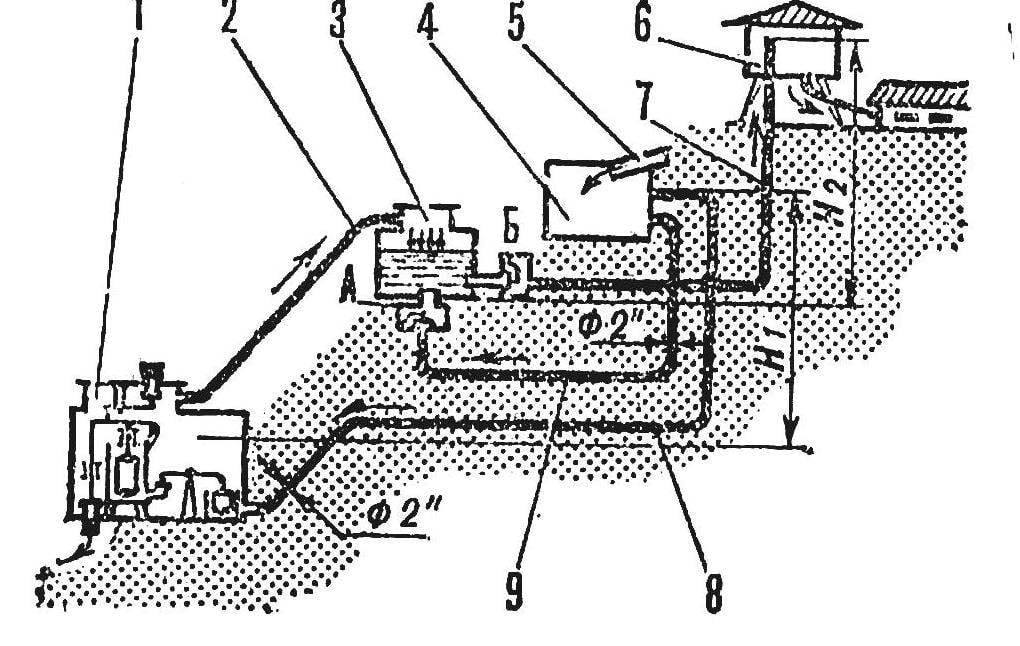 Unremarkable externally, water tower farm “Precepts of Ilyich” Spassky district, Gorky region. One year supplies the sleep of the villagers spring water. However, coming closer, you will not hear the usual noise water pump operation — he’s not here! And although the source is considerably below the level of the top of the container, water, with only a short respite, rise up! It is not a miracle? No, just Gorky handyman, locksmith-Borsi Yiwu L. Ceranova managed to invent and test the original hydraulic installation, in which for lifting water is used… the energy of the source. We offer our readers acquainted with the principle of operation and device.
Device device of water supply in rural areas: the electric pump supplies water to a pressure tank, from where it is to consumers. But the electricity to lift water often develop local hydroelectric power by converting the pressure of a moving stream. So not do I do without the help of electricity, forcing him to work only the source of water — Creek, spring? This can be accomplished using a simple hydraulic installation, acting on the principle of a “seesaw”: drain a certain amount of water provides part of its lift at a certain height above the source.
Device automatic non-motorised water shown in figure 1. Main parts: water tank, water well source, pressure and air pressure tanks, valve mechanisms and the connecting pipe.
Water from the spring fills the well. As soon as its level reaches the inlet of the connecting pipe 9, it begins to flow into the pressure tank. When that fills up, the level in the well will rise to the bleed pipe 8 and the water will flow into the air tank. The pressure of the compressed air there, the pipe 2 is transmitted to the pressure tank, and since the height H] more of NZ on the magnitude of the pressure loss PT of resistance in the pipes, the water there will rise up in the water tank. The reverse flow of water from the pressure tank into the well will prevent the closed valve A. 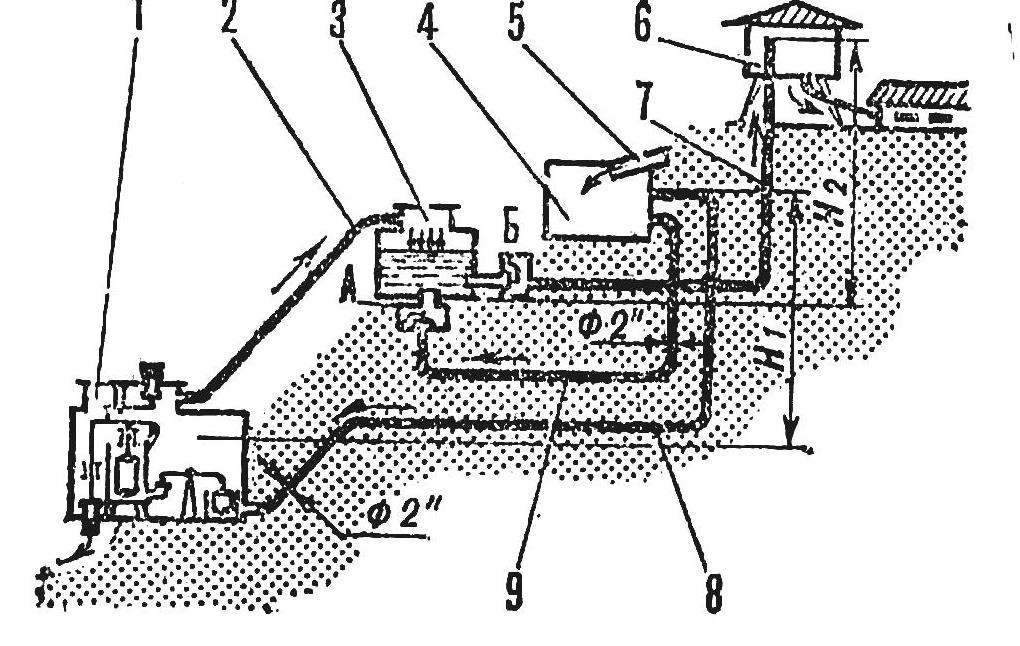 Fig. 1. Scheme water:
1 — air tank 2 — air tube, 3 — pressure tank, 4 well, 5 — spring, 6 — water tank 7 — discharge tube, 8 — standpipe, 9 — connecting pipe; A, B — valves the pressure tank.
The water flow in the water tank will continue as long as the air is filled with water. When it works its valve mechanism and the water goes into the drain hole. Then the operating cycle is repeated.
The valve mechanism of the air tank (Fig. 2) works as follows. Incoming through the pipe 3 the water, displacing the air in the pressure tank fills air tank in it.. Up to the top level of the cylinder, the water will raise the float 10, which closes the valve 13, blocking access to the depth of the float 2. To get to him, she can only through the upper section of the glass — when all the air is pushed into the pressure tank. When filling the glass float leverage open air and drain valves, indicating pressure tank with the atmosphere, and the air — with the drain pipe 14. The valves will stay open until the tank is empty. And only when the water through the small hole 12 will flow out from the cylinder 11, the float 10 will open its drain valve lever 13 a glass. Float 2 drops, close the valves 8 and 15, the tank is again ready to work. 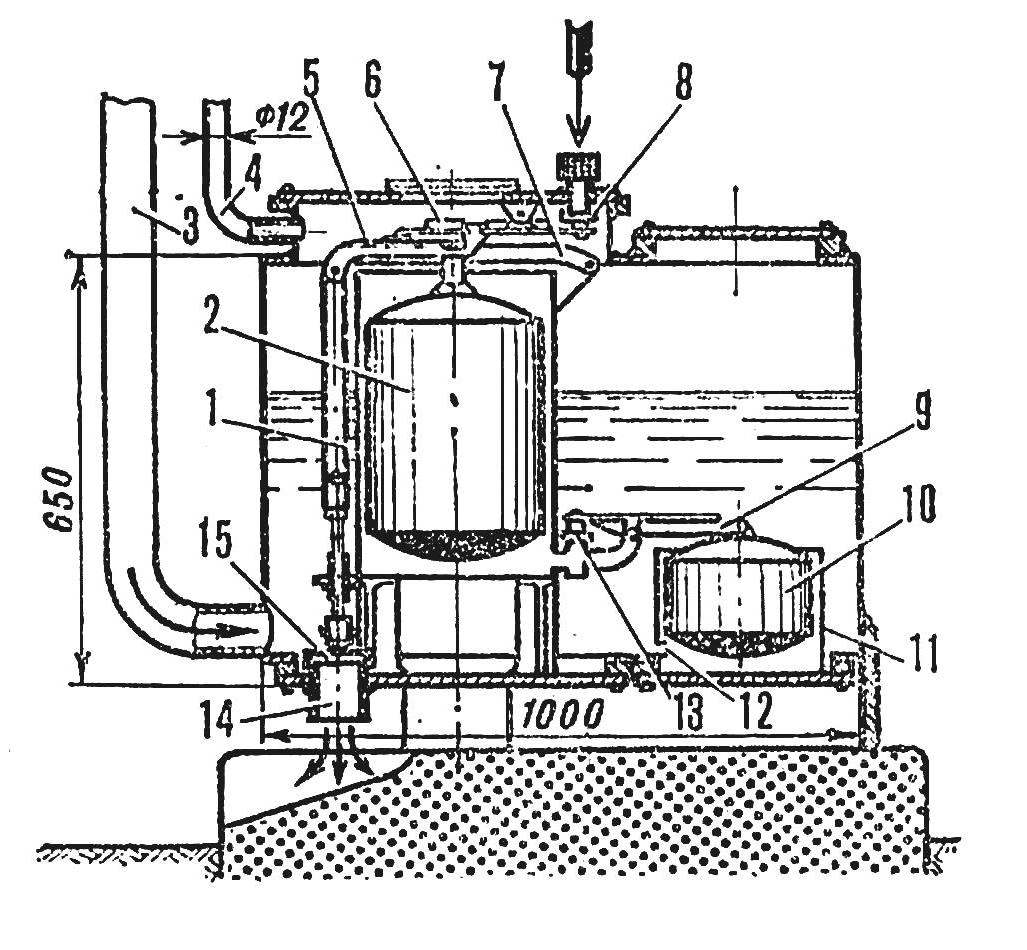 R and S. 2. The valve train air tank:
1 — Cup, 2 — float, 3 — standpipe, 4 — air pipe,5, 6, 7 — levers of a float 8 — air valve, 9 — lever, 10 — float 11 — cylinder, 12 — by-pass hole, 13 — valve 14 — drain pipe, 15 — drain valve.
The performance of such water depends on the flow rate of the source, height of water, the diameter of the pipe. The current installation at a drop of water H1 = 8.2 m and pressure of H2 = 7 m 21 has a capacity of 312 liters of water per day. One charge cycle tanks takes 15 minutes and feeds in the water tower, 222 l, merging of air 507 L.
Installation is simple in design and can be made from materials available in small machine shops. Reliability, reliability and autonomy allow us to operate such a water lift away from power lines, used to create artificial reservoirs, irrigation systems, and other household needs. Thanks to the automatic mode, the system can be a long time to work without supervision person.
The diagram shows only one such plant operating on the principle of the hydraulic compressor. For more pressure the system can be done twofold: with the consistent rise of water in the two pressure tanks. The lack of hydraulic connection between the air and the pressure tank allows the plant to operate on two sources of water when, for example, the pure spring has a small performance, a nearby rushing mountain stream,undrinkable. Then the key of Veda can do only in a pressure tank, from a spring in the air, creating the necessary pressure in the system.
If readers are interested in my message, I’d love to share with them their experiences and new ideas.
L. SHARDS, Bitter