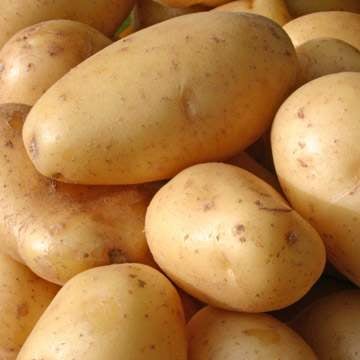 It is possible to invent in all spheres of human activity. And agriculture is no exception. It is known that potatoes are best grown in sandy soil: and plant it well and harvest easy to mechanize. Well, if the soil is solid clay, weather – rain, rain, revocable, and agricultural equipment available? Grow crops in this case, the farmer helps his fiction. To trace the course of thought of the inventor, as a rule, difficult. But by and large, useless. Much more important is the result of the thinking process. In the case of potatoes, in relation to my humble experience since 1991, it can be so.

In the spring I’m on my nepahannoe a plot laid out in the light of sprouted seed potatoes on the ground and sprinkle a layer of sawdust mixed with peat, rotted manure, other organic matter, and ash. Layer thickness about 10 cm, only potatoes could be seen.

According to the traditional technology of cultivation of potatoes usually waiting when the ground thaws and dries out, that is ripe for ploughing. And only after plowing her tubers are planted.
In my opinion, no need to plow, and planting can begin immediately after the snow melts, that is, a month earlier than usual agro-technical terms. It is beneficial in many ways. First, get potatoes early; second, the early planting significantly increases the total harvest.

Your plot area of one hectare on the edge of the forest in Kostroma region, I broke for plot size 60×15 m with a two-foot paths between them. Rainfall less eroded plots, enhance their contour plastjami of split on the diameter meter of logs with a thickness of 20-30 cm, the benefit of the forest nearby.

The sawdust I use only the old, semi-rotted. Fresh acidity: shoots fired and can’t even come up. Low acidity, on the contrary, useful: tubers, no scab.

Remaining in the field for the winter sawdust is suitable for the next season. I rake them and put it on the ground sprouted tubers are larger (weighing up to 300g) 1 piece/m2 and flood. Over time, as decomposition of old sawdust added fresh — poured them on top immediately after planting potatoes. Do it once in a few years.

Plants are growing as usual: the roots in untilled soil, and the tubers remain in the sawdust. Gradually, under the bushes the ground swell, the formation of lumps. The bigger they are, the more abundant a crop. Some varieties of potato such technology of cultivation of crop yield up to 5 kg of early potatoes (that’s 40-50 potatoes) per Bush! Of course, all this at a high dose of fertilizer in the first place “NPK”, and the optimum moisture content of the soil. The tubers grow large, well shaped and clean. They almost never have mechanical damage and rot during long storage.

Scheme of arrangement of allotments for growing of early potatoes:

To harvest easily in any weather. Even after heavy rains. Cleaning to primitive is simple: take Bush by the hand and together with the tops pull out of the sawdust all his tubers. Is typed half a bucket!

However, this method is applicable when receiving, again, only early potatoes. After full ripening of the tubers in average weight of 200-300 g, and the individual instances and the more — pounds! (In brackets I will note that on our lands in
such productivity — up to 400 kg/ha — differ mainly Dutch varieties of potato; domestic give less to a maximum of 150 kg/ha.) So, pound the giants with tops is not so easy to pull out. But you can, again without any mechanization, just choose from sawdust with his hands.

Productivity in this case is quite high: for light day one person is able to manually collect roots from ten acres. This is about ten times more than a shovel or a pitchfork with a conventional potato fields.

Of the disadvantages of my technology could be noted that sawdust is quite comfortable feel of the mouse that eats the roots. There are also people who are not indifferent to other people’s potatoes. It happened quietly pull the tubers from under the Bush, and the sawdust will pour. From the look — Bush on the spot, continues to grow, but the harvest is no longer under him.

However, the advantages of technology far outweigh its shortcomings.