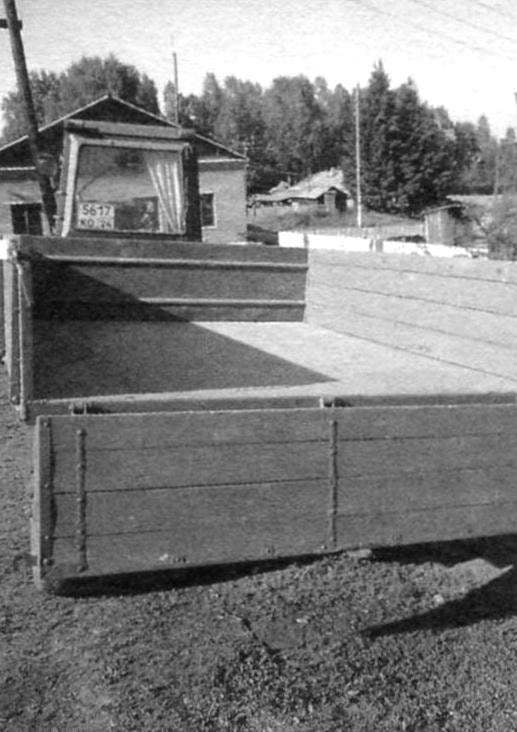 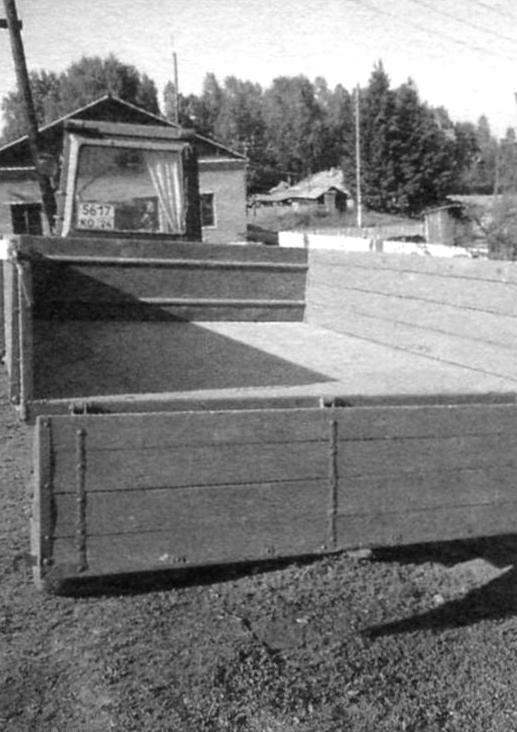 The process of transportation of any cargo is always the sum of three components: loading, delivery and unloading. Suppose the goods are transported to the farmyard. The moment of discharge -it happens here, usually by hand, occasionally, when there is a possibility to use a crane, it is just for removing from the vehicle any bulky loads.

And all by hand! The work is laborious, whether in bulk or boxed. Here involuntarily there is a question about the “mechanization process”.
Do this and I. Decided to build a small “saobracaj” trailer for tractor with lifting capacity of 2 – 3 so As not to seem strange, but I think initially stopped at… kvass barrel. Officially it’s called car trailer ATSPT-9 for the transport of the brew. Of course, I saw only the trailer, its frame that can withstand the barrel with kvass with a total mass of about a ton.
As it turned out, it was created on the basis of uniaxial tractor trailer 1-PT-1,7. In its own weight of 0.8 t at this trailer it was possible to carry loads up to 1.8 t; the installation platform 2484×940 mm – was also quite sufficient to place art work of the body of the trailer.
For the frame of the trailer picked up by metal profiles, such as standing on the frame channels: front cross member section 100x46x5 mm lateral spars (in order to avoid the occurrence of longitudinal bends when passing over a rough road) – more powerful – cross-section 140x58x5 mm; rear beam, which accounts for lifting the body a large part of the mass of the load – Frame 120x52x5 mm. in diameter reinforced Central beam somewhat smaller cross – sections 100x100x4 mm. in addition, to insure the gusset connecting the rear beam and the spars. Thus, it turned out metal frame dimensions 1800×1700 mm, all the joints where welded. 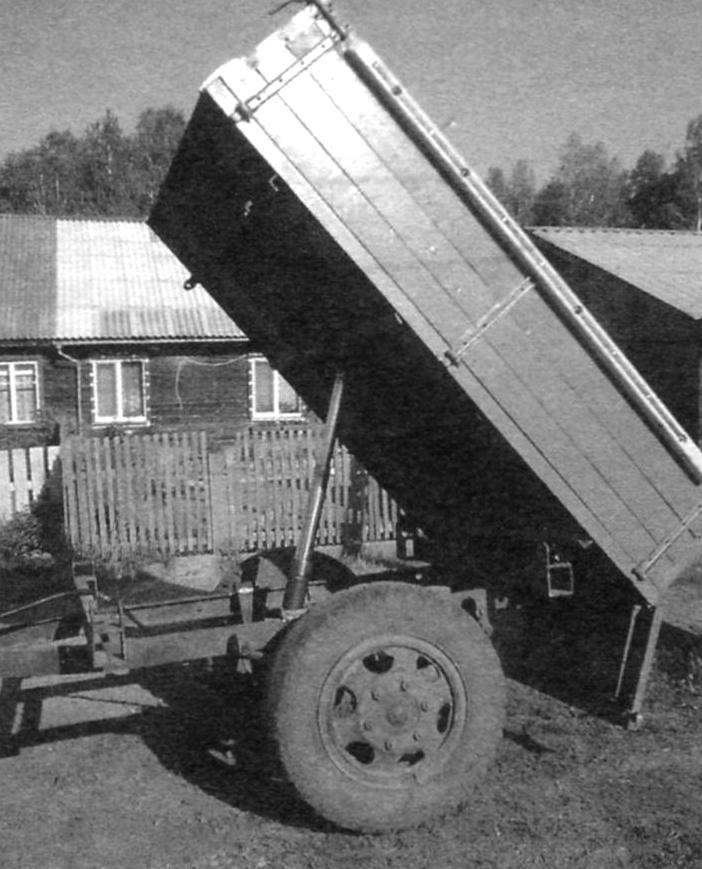 The body of the trailer in the raised position (side view) 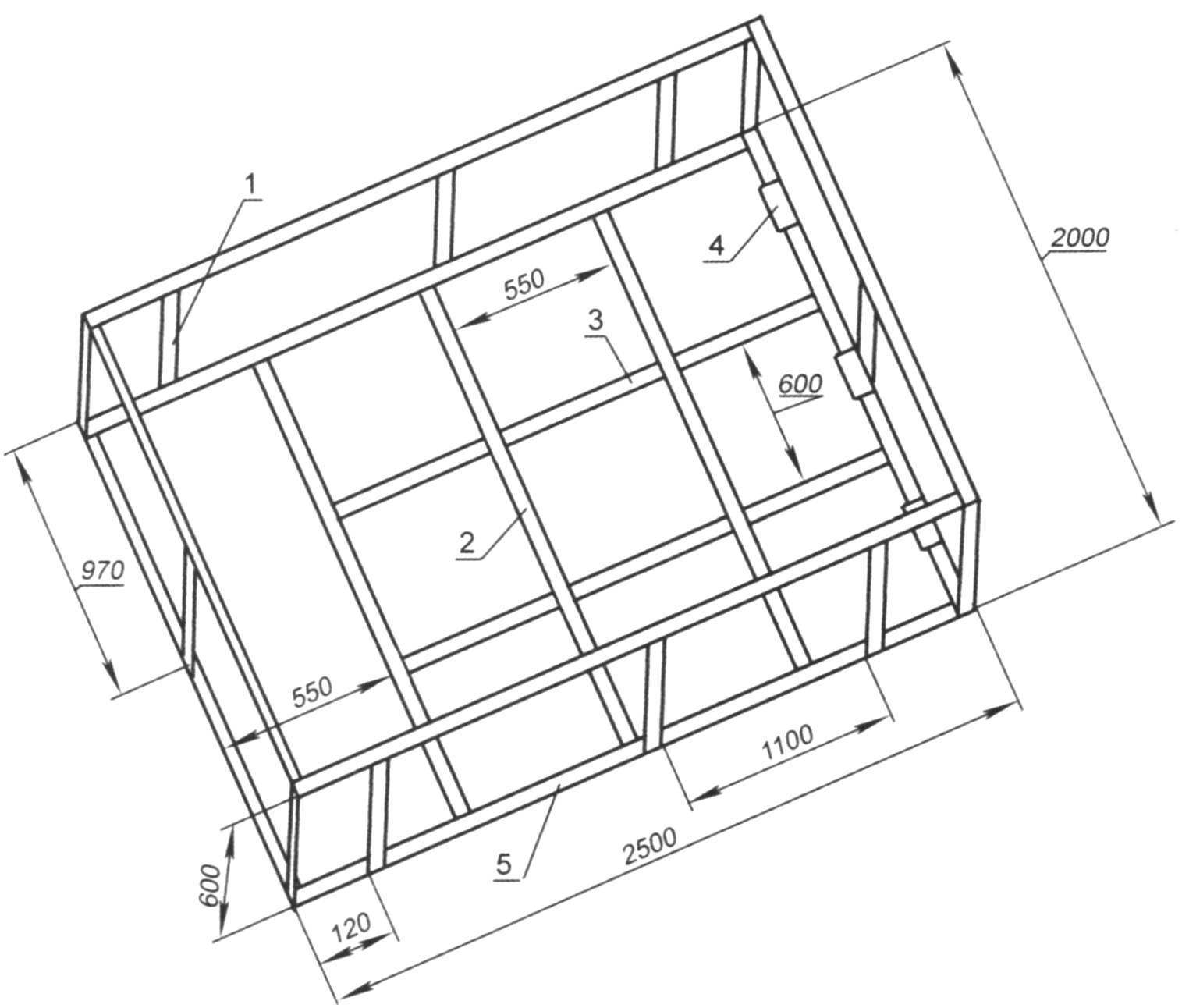 The scheme of the bodyshell:
1 – front side (channel 500x50x5); 2 – stringer (channel 120x52x5); 3 – longeron (channel 100x46x4); 4 – hinge; 5 – harness floor (area 80x80x6)
As the hydraulic cylinder used lift tractor trailer 1ПТС-9. His stock is 850 mm, which allowed to lift the body by the angle a little more than 50°, is sufficient for complete sliding of the soil.
However, to install on the frame the cylinder, had to make the farm in the form of an inverted truncated triangle, the strut is of channel section 120x52x5 mm. At the lower pad of the brace 300 mm wide and placed the hydraulic cylinder. As the stop is in the upper part of the used metal circle with a diameter of 650 mm, preveiw it to the parts of the body structure. The hose connected directly to the tractor hydraulic system. Strut clearance is 300 mm.
Had a little longer to Tinker with the drawbar. The wheels of the truck from GAZ-53 (8,25R20) – have a diameter of 962 mm, and found that when connected to the tractor frame was not installed in a horizontal position, and with a significant slope. Had the rich “to belittle”, and this weld under him shook from the channel dimensions 100x45x4 mm, moreover, in front to put another trailer bearing plate with dimensions 150×20 mm. the frame is then “leveled off”. 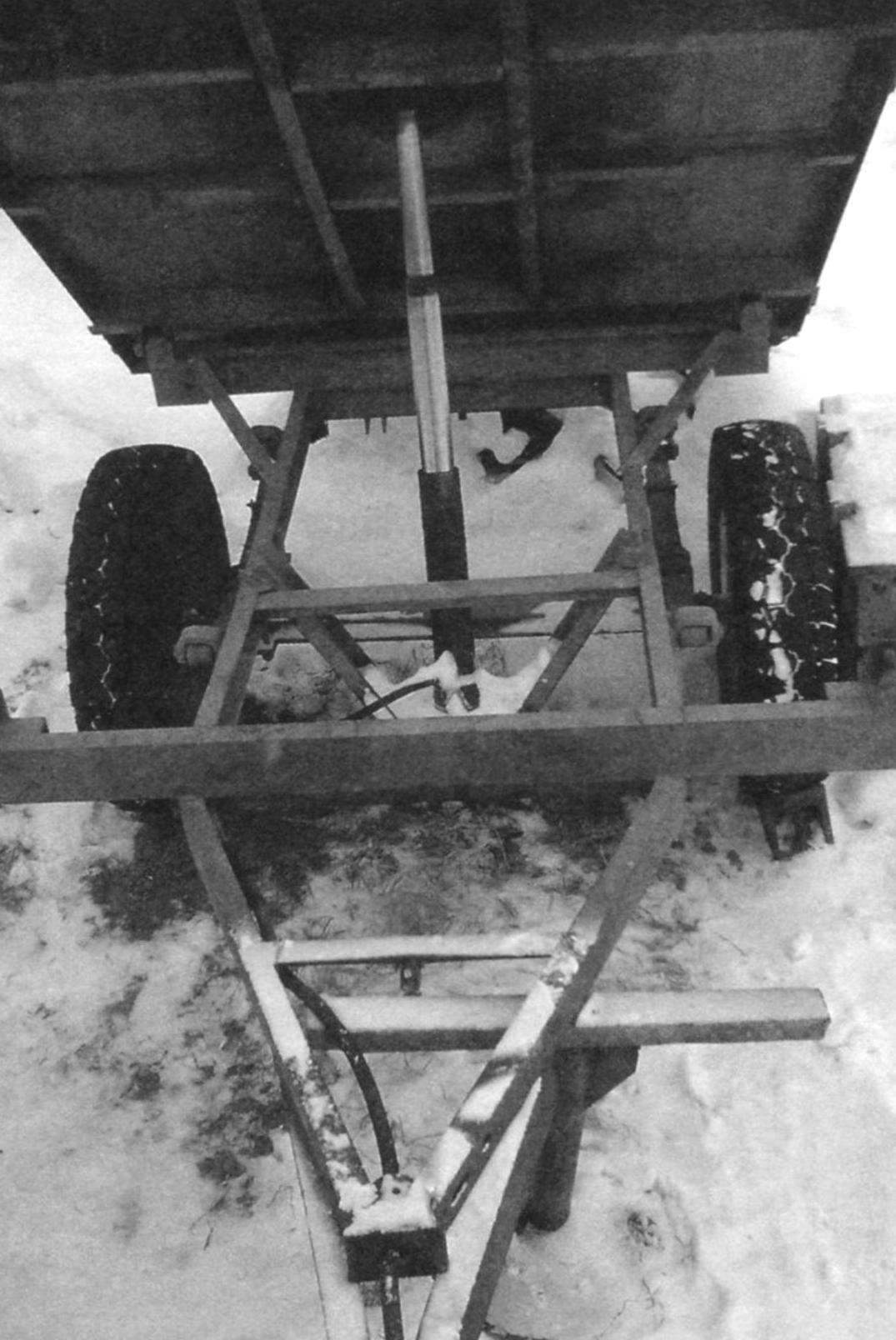 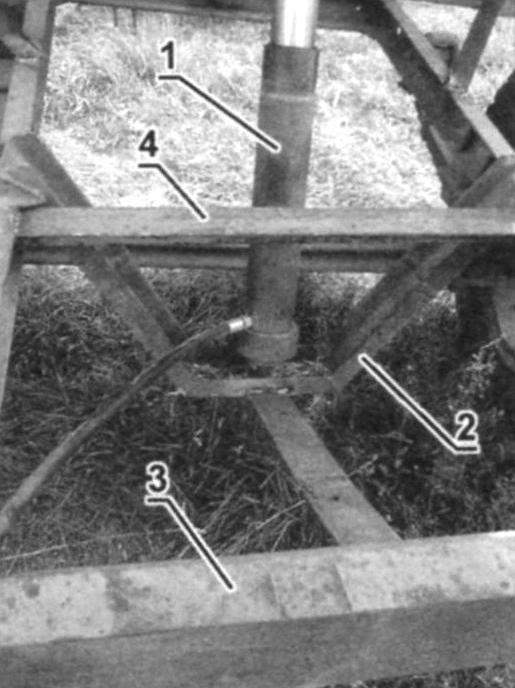 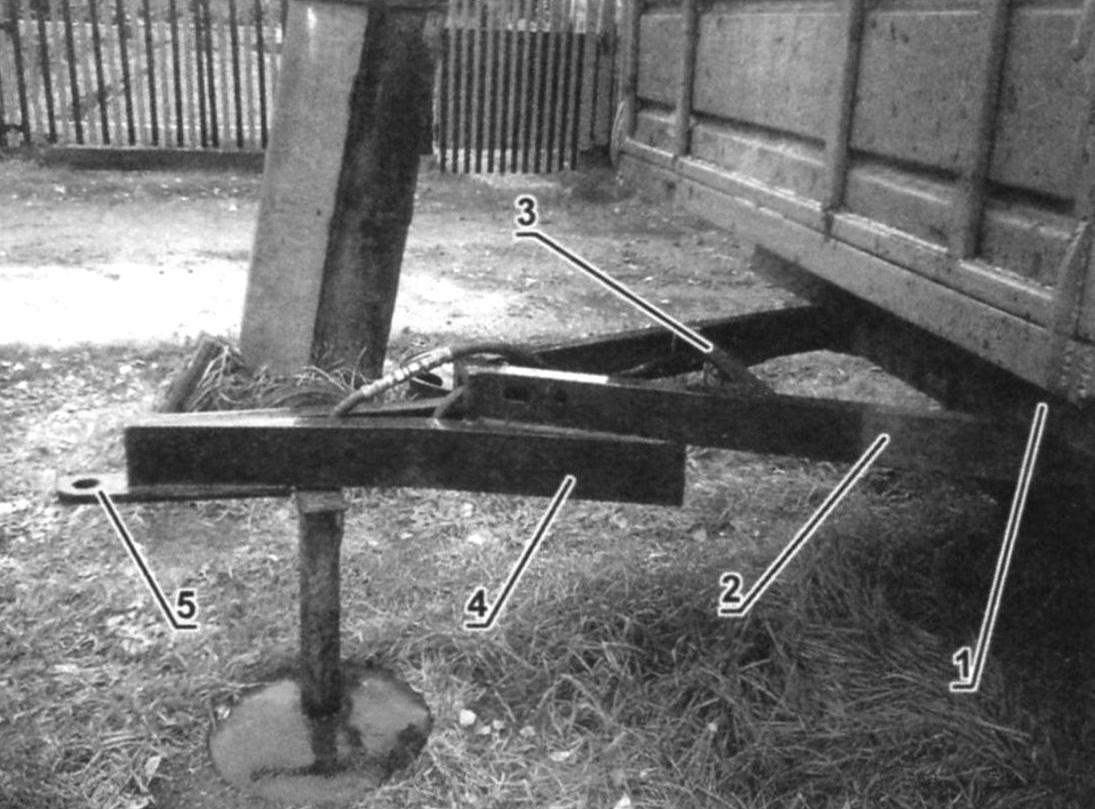 The front part of the frame:
1 – front cross-member; 2 – pole; 3 – cross amplifier; 4 – good; 5 – emphasis
Then he moved on to the construction of the body. Then it was moving faster. Spars and stringers, again u 120x52x5 mm and 100x46x4 mm, Packed cell diagram at a distance of 550 mm and 600 mm on the strapping floor corner size mm. 80x80x6 Top covered with sheet iron thickness of 2 mm. Side height of 600 mm was hung from eaves Board size 150×25, put it in vertical metal strips size mm. 500x55x5 In the corners they are locked normal side locks.
The rear stringer of the body reinforced in the hinges of the rear beam of the frame.
It should be noted that the body for balancing the center of gravity had to shift in a horizontal plane at 200 mm forward of the axis of the frame.
Body size – 2500х 2000 mm. of the Load placed in him, as planned, about 2.5 T.
Within a few years, the trailer does its job without any breakdowns and failures. Mostly I translate bulk cargo, but also have to load the trailer with hay, voloshinoi grass, and “iron”.
S. SEDELNIKOV, S. Atamanovo, Krasnoyarsk Krai