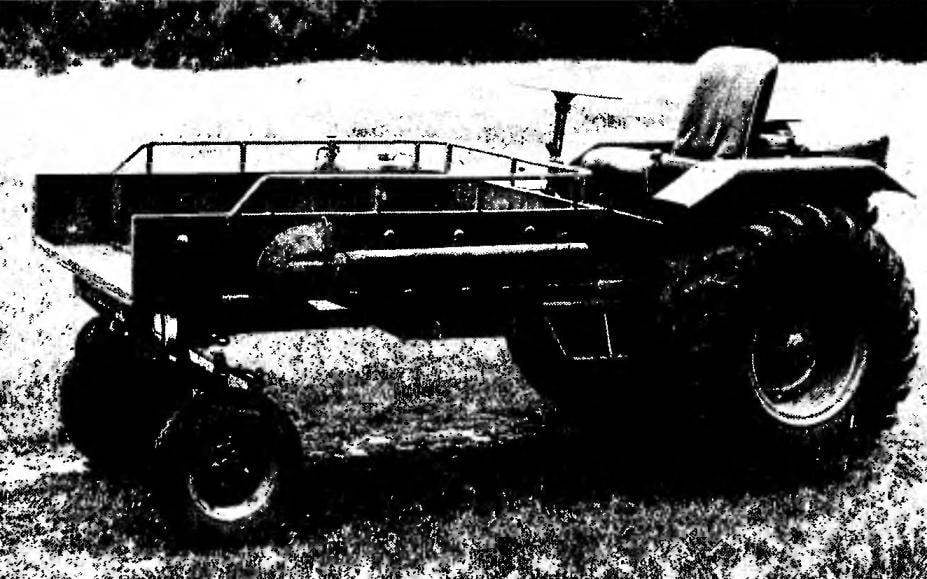 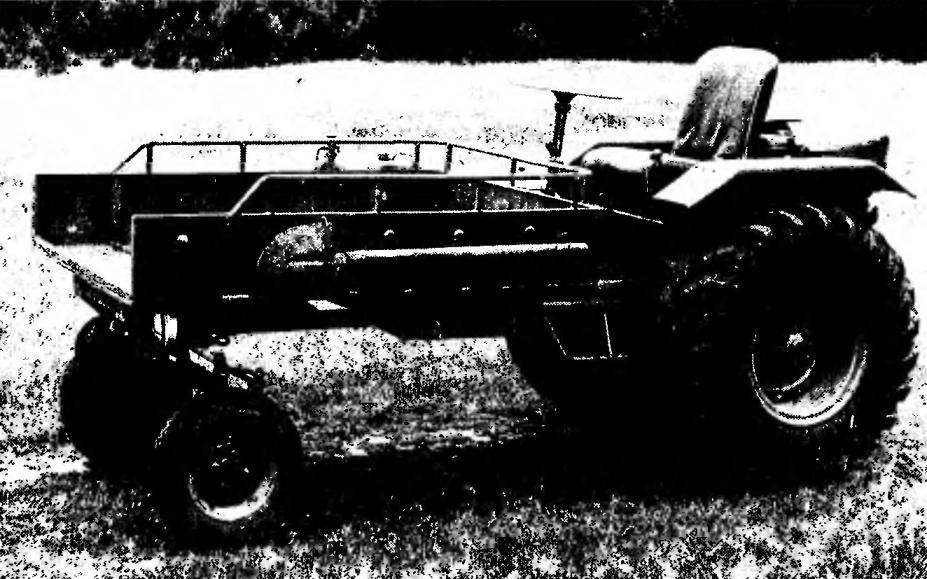 Self-propelled chassis, called the “Bull” that I built over ten years ago. For such a considerable time of operation the machine showed itself unpretentious, reliable and workable. The layout of its classic truck body front, the driver’s seat (in this case it is open) and the engine — rear; front axle — steering, rear — host. “Bull” is primarily designed for the carriage of goods weighing up to 500 kg with a speed of 35 km/h. But it is possible to work the ground. We only need, say, before plowing to replace the sprocket gearbox for a large, which will give increased traction, and attach the plow. Also, using a PTO shaft to hook up and operate a circular saw, water pump, mower, etc.

The basis self-propelled chassis frame is fairly simple outlines. It is welded from thick-walled tubes of circular and square cross-section. Numerous spot welds are reinforced with gussets and plates of steel sheet with a thickness of 4 mm with ease holes.
The frame is fitted with various brackets for mounting units of the power plant, transmission and auxiliary equipment. Thus, the left console frame has an angled bracket screwed to the gearbox of the winch (cable drum, it is drawn by the bolt to the jumper). Front beam carries a suspension unit of the front axle, made of steel sheet with a thickness of 25 mm and reinforced struts. The Central beam is welded to a bracket made of steel channel for mounting the steering column. Further on the longitudinal members hosted “paws” fixing the transfer case, the longitudinal arc of water pipes with corner brackets of the wings, the transverse arc with the studs of the frame of the tank and plate (u) support the rear axle. Finally, the beam is welded to the back area of the gearbox and engine mount, the cradle where their front end is still attached to a transverse arc. Above is a bracket for front mounting the engine Assembly based on the two ribs, welded to the cradle. Octagonal trim plate connects the bracket and the transverse arch.
The other end of the frame carries a motor supported by a vertical corner edge of the bar with two spacers of the square tube on which the engine rests with its rear mounting assemblies. However, the beam and rear beam are connected by two props of water pipes (in addition to its direct purpose is to provide rigidity engine mounts — struts are still spin them on a tow rope when not in use).
In addition, the side members of the frame installed the driver’s platform with the pedals and control levers and a cargo body. But more on that later. 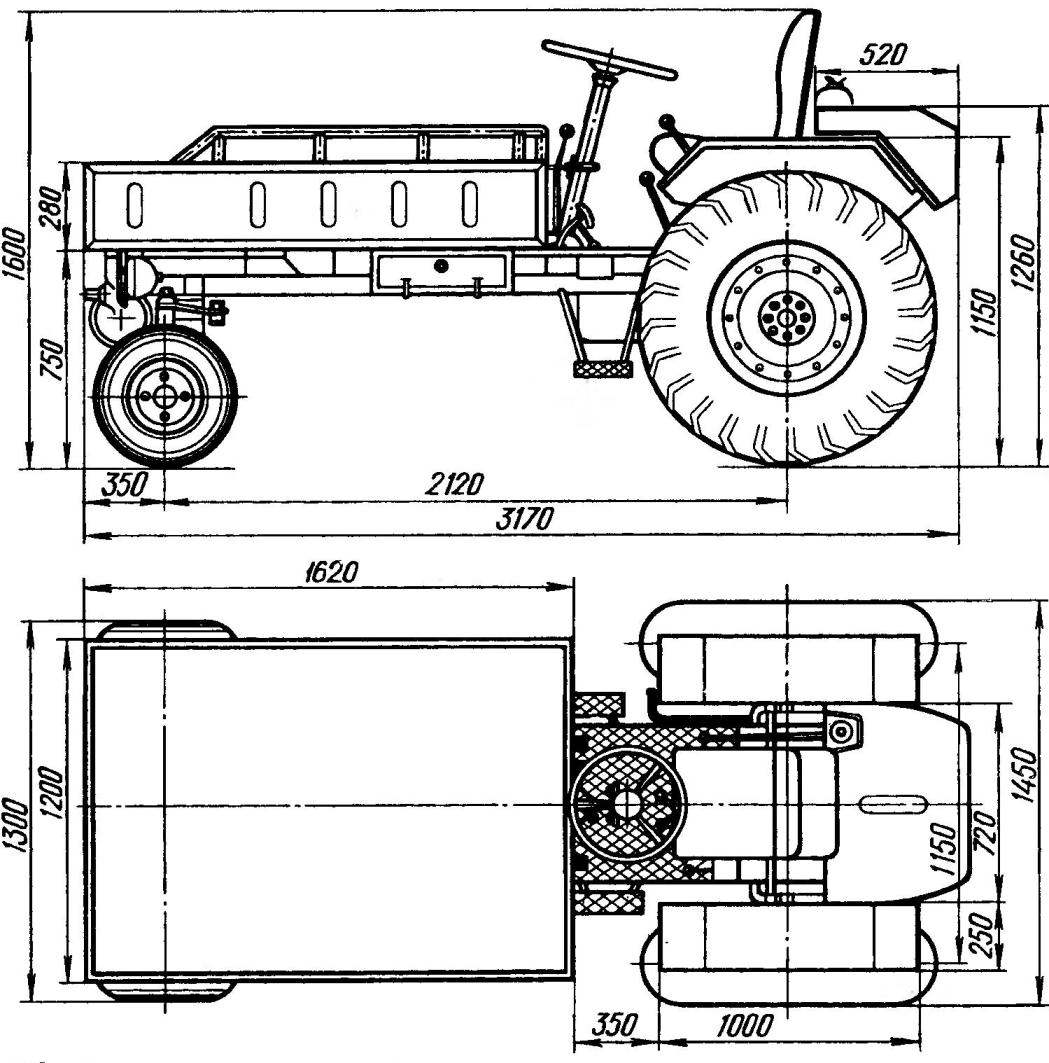 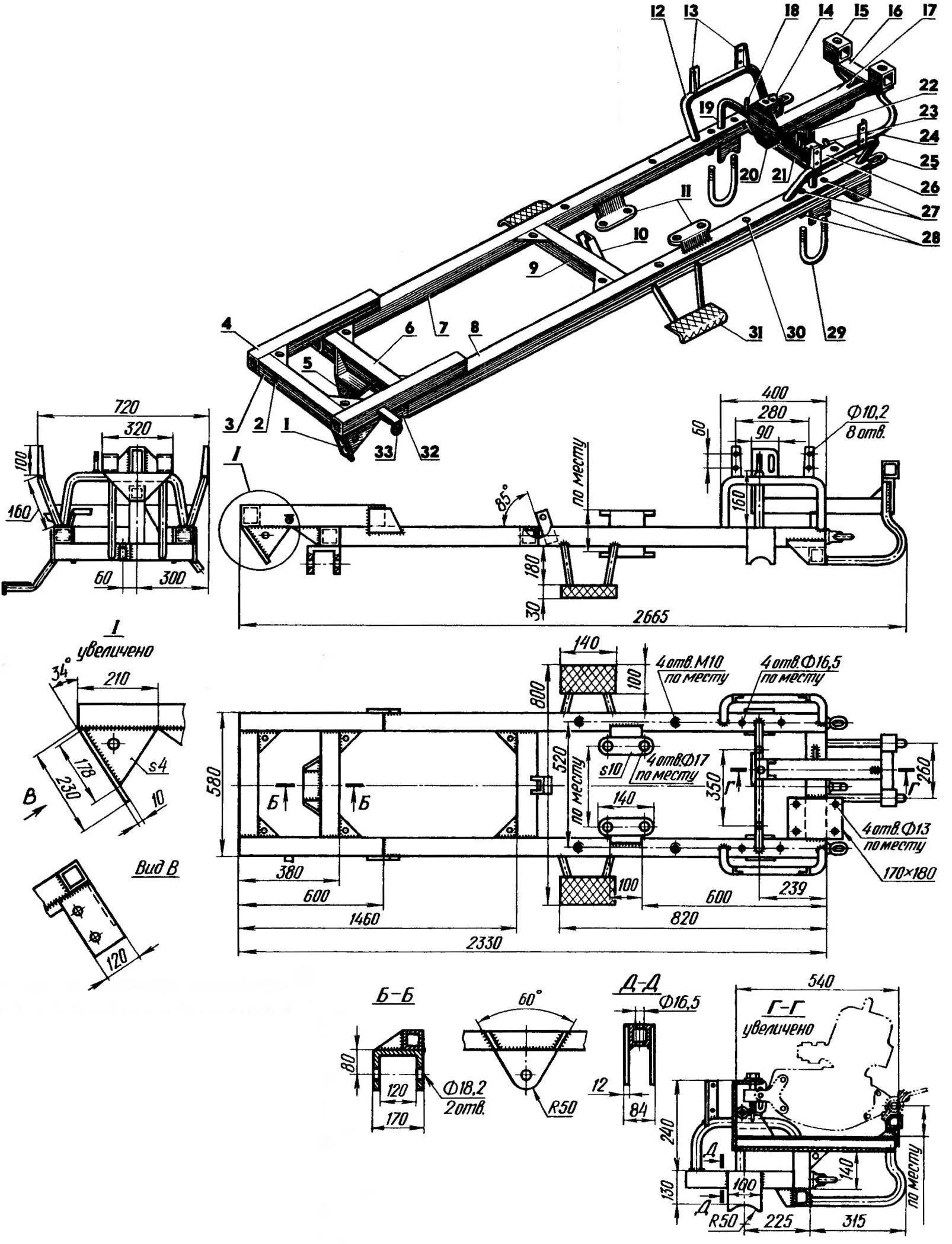 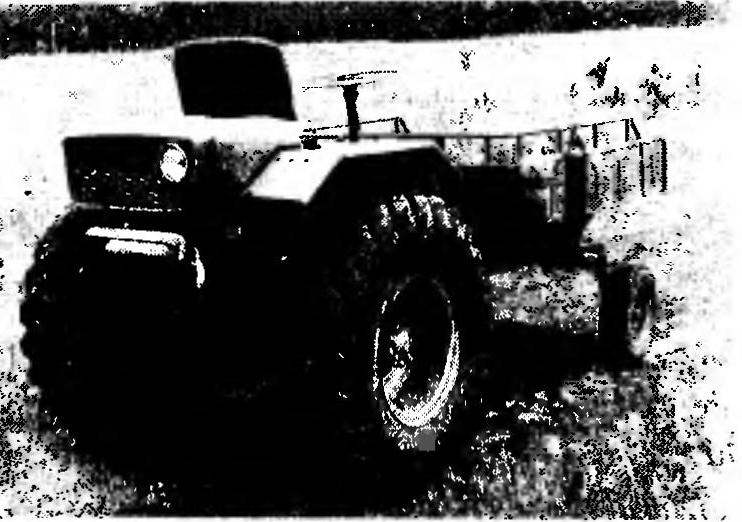 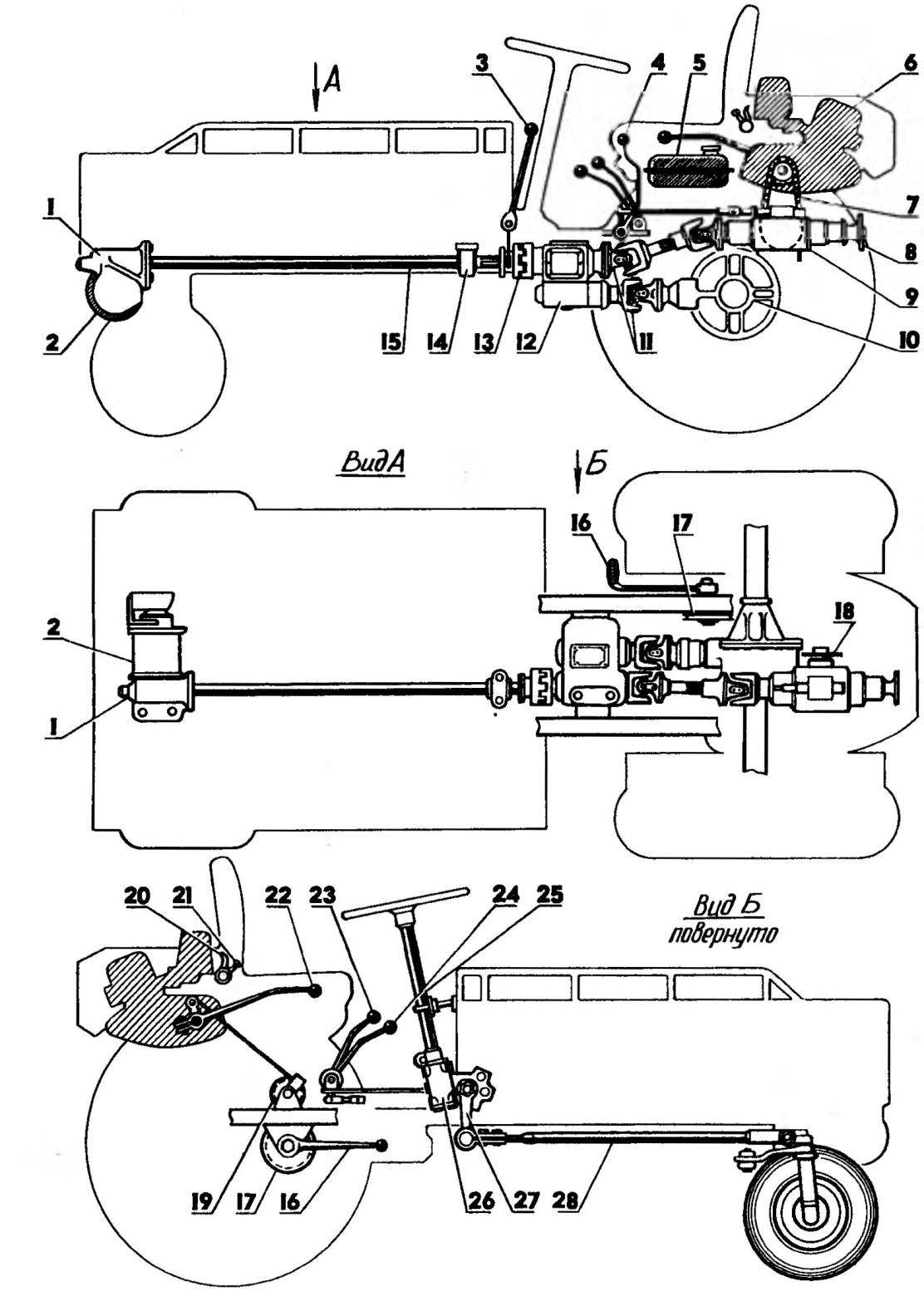 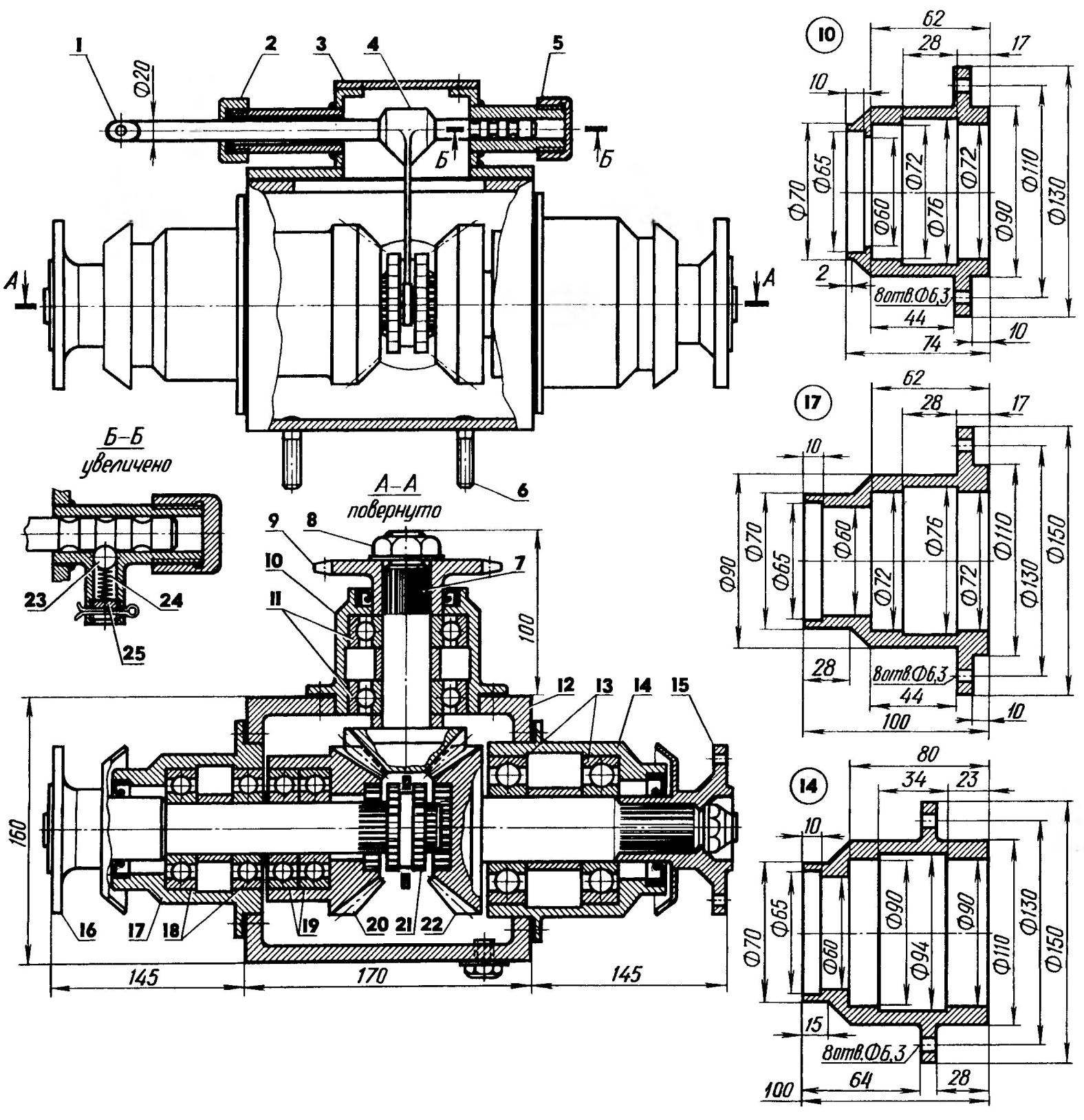 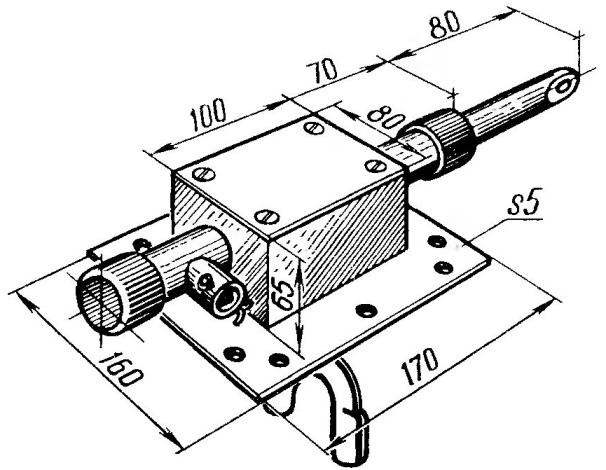 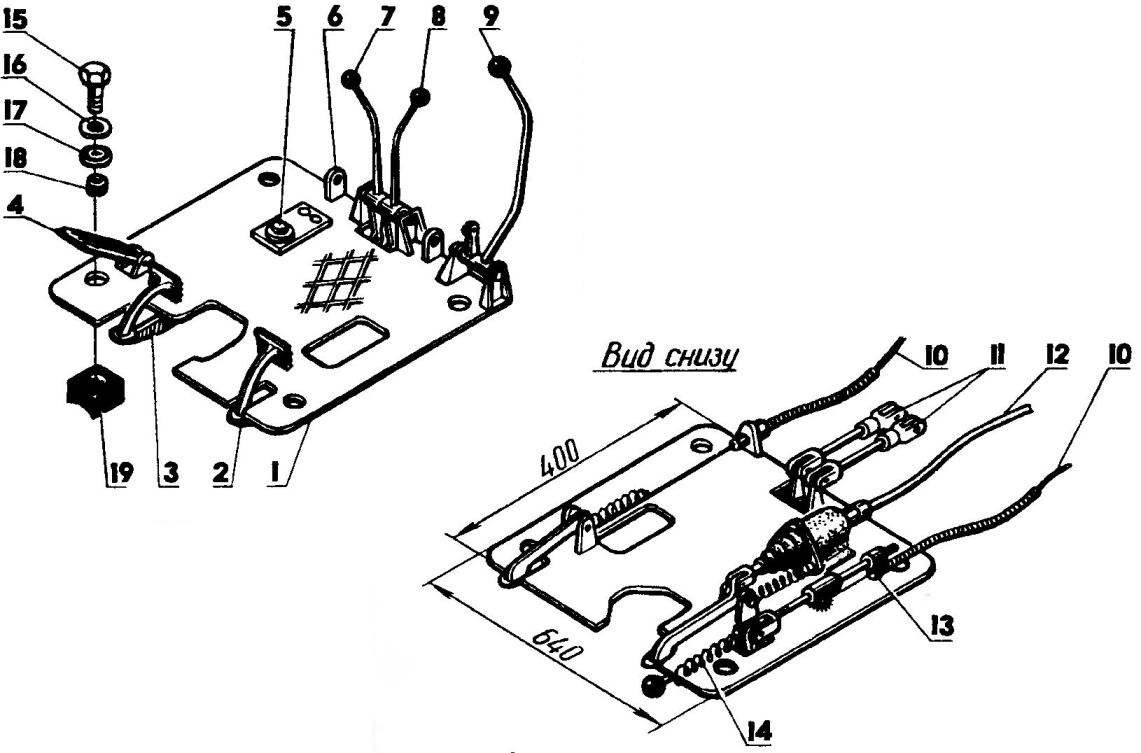 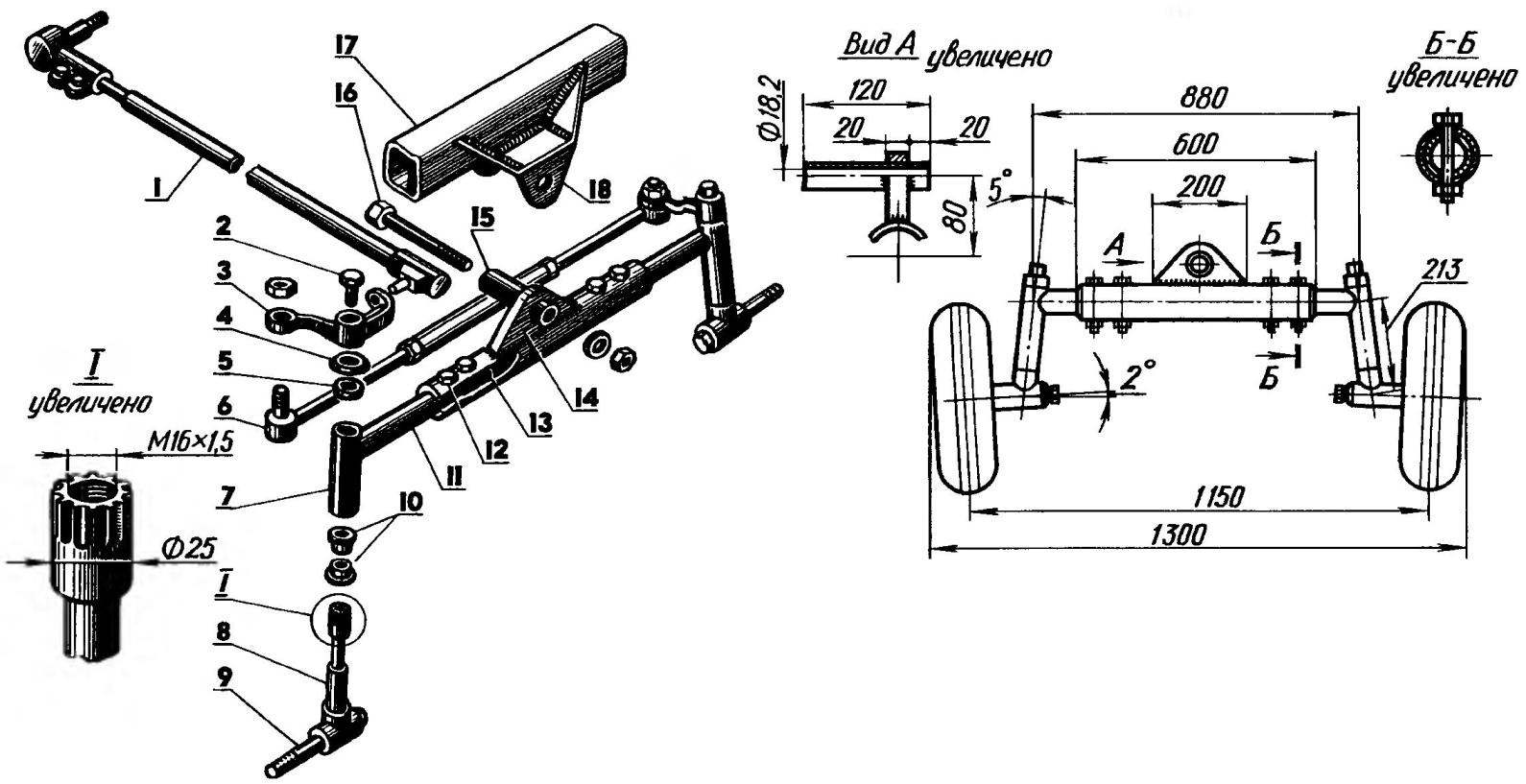 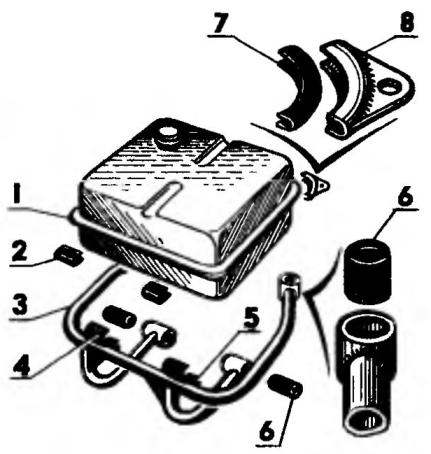 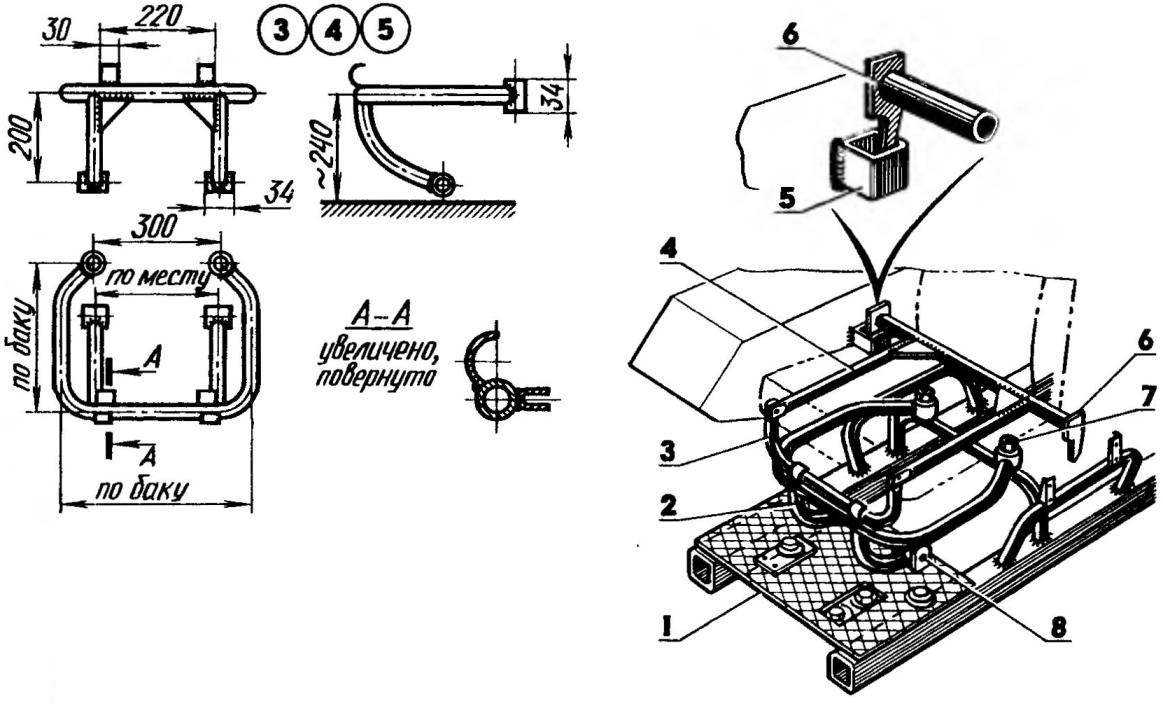 The position of the frame the fuel tank and podselenie on the frame self-propelled chassis (left wing is not shown):
1 — plamadyala; 2 — frame gas tank; 3 — arc of podselenie; 4 — podsednik; 5 — eyelet fixing podselenie on the wing; 6 — teeth fixing podselenie; 7,8 — attachment points of the frame of the tank.
Rear axle from GAZ-51 , cropped. The length for the flanges of semiaxes now is 1220 mm. Their “stockings” the bridge is included in respective supports of the frame self-propelled chassis and dragged him to the bottom of the two ladders 16 mm diameter passing through the side members. Rear wheel from car ZIL — 157. When mounting the hubs are oriented so that the hub does not protrude beyond the dimensions of the wheels.
Brake system “Bull” — hydraulic, from the GAZ-51. Only acts on the rear wheels.
Driver platform on which the levers and the control pedals, is made of corrugated sheet steel with a thickness of 4 mm. Has two cutouts: one for the main brake cylinder and the other for “paws” fixing the transfer case. Rear brackets are installed the controls reverse-a reducer, transfer case, disconnecting the rear axle. There are welded two ears of the mounting frame of the tank. Ahead, according to the classical scheme, placed clutch pedal, brake and “gas”. Brackets pedals located under the ground. To the frame platform attached with four bolts M10 on the rubber pads.
Wings self-propelled chassis of the tractor DT-20. They had a good match in size. Yes, and many of them are relatively small. Attached wings eight bolts M10 (lugs on the longitudinal edges welded to the spars).
The wings have not only the role of mud flaps. They assume the mass of the rider, as they leans the seat back tube his teeth enters the nest, made of pipe cross-section of 25×20 mm. in addition, on the left wing located the fuse box and tool kit, and on the right is the air cleaner of the engine (from a motorcycle IZH-PS-350) and height adjustable arm with levers control the decompressor and fuel corrector.
The driver’s seat from the sidecar FDD slightly redesigned and reinforced. Can be adjusted vertically and horizontally, and recline on hinges forward, lying back on the steering wheel and giving free access to tank for refueling.
The fuel tank is also from FDD. Mounted under the seat on a special frame made out of pipes with a diameter of 27 mm. as the fuel tank level is below the float chamber of the carburetor, the fuel line entered Tickler pear from the boat motor “Breeze”.
Great attention is paid to the cleaning gas. On the label on fuel filler neck gas tank has a primary filter is a removable fine mesh. Further through the valve KP-12 filter mesh and sump gasoline for flexible rubber hoses is sequentially supplied to the transfer bag, then in the filter sump, fuel pump with its filters, and only then gets into the carb. It turned out difficult, but the operation justified it.
Frame fuel tank has four points of support: the bottom two (with rubber bushings) M10 bolted to the lugs of the driver’s platform, and the top two (also with rubber bushings) worn on the studs of the transverse arc of the frame self-propelled chassis.
The fuel tank is also recorded at four points (with rubber inserts): front — brackets welded to his frame, and the back — the same pins on the transverse arc. The abundance of rubber inserts to absorb noise and vibration generated by engine.
The engine is covered with a hood of sheet steel with a thickness of 1.8 mm, which is embedded behind the grille with the headlamp of a moped “Riga”. The hood opens forward and in this position is held by the backup. Closing, it falls on the two rubber cushions on the wings and “tacked on” two coil springs.
Ahead to the left under the body of the “Bull” has installed the headlight from the FDD, adjustable vertically and horizontally. Wiring is very simple. The control panel has a common switch and light switch “near — far” for the front lights, rear the same (remember: it was from a moped “Riga”) is only activated when reversing.
Truck body is welded from steel sheets with thickness of 1.8 mm and a banded area, 20×20 mm. For stiffness in the sides embossed vertical ridges, and on top put a kind of fence made of pipes with a diameter of 21 mm. Front wall hinged, fixed a hook on the end of the chain. Lowering the Board and secure it in the same plane with the bottom of the body will get an elongated platform for transportation of oversized cargo. To the left side attached bayonet spade, and to the right is the canister of fuel and a fire extinguisher. Under the body to the left and right are quite roomy, metal roof rack.
The body is attached in the following way. First to the frame using ladders and bolts screwed four cradle of boards and beams, pre-impregnated with hot linseed oil. And to them — the very body — the M8 bolts with round heads.
Take this description of the magazine, I thought that’s what. All Amateur constructors, starting the manufacture of its machines, based on the experience of predecessors. Maybe my achievements will be useful to someone.
V. PETROV, S. P s b n o e, Krasnoyarsk Krai