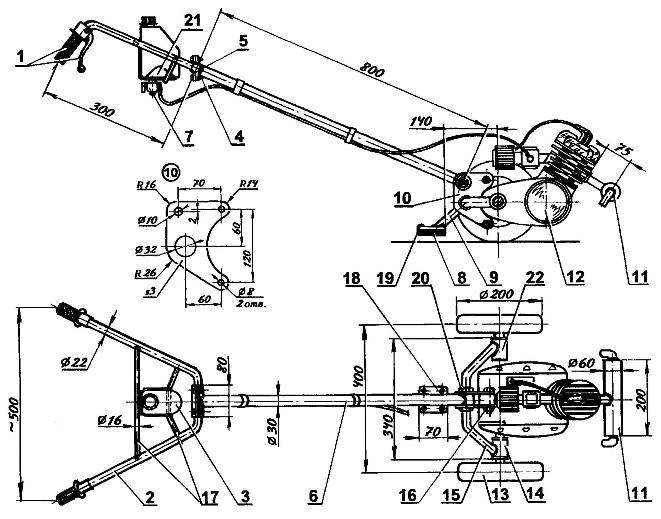 Towing for wheelchair users, skaters and cyclists. vehicles can be divided into motorized and non-motorised. And the second can be transformed into the first by equipping the engine. So at the time of bike get the bike out of the coach — car, tram — tram. But unfortunately, not every non-motorized vehicle can be equipped with internal combustion engine: if you install it on a wheelchair, then it will be impossible to use at home, and be equipped with motor roller skates or roller skis will hardly allow their sizes.
However, to solve these problems is not too difficult with the help of mototada on the basis of any motorbike engine.
Metamagic it resembles a two-wheeled handcart or wheelbarrow, in which the shipment set moped engine. In our case, is V-50. With a simple chain clutch (it is a device of two identical stars are connected by a ring of double-row roller chain) sprocket motor directly connected with the right leading wheel mototech; the left wheel remains without a drive. Wheels with tyre-mi-Pneumatics have a small diameter of 200 mm, these are available in hardware stores.
Metamagic equipped with a long pole with a hinged handlebars, which are the controls: throttle grip, clutch lever and switch gear. In addition to the steering wheel mounted toponimo this handlebar mounted fuel tank — a-liter plastic canister with kremotecontrol. 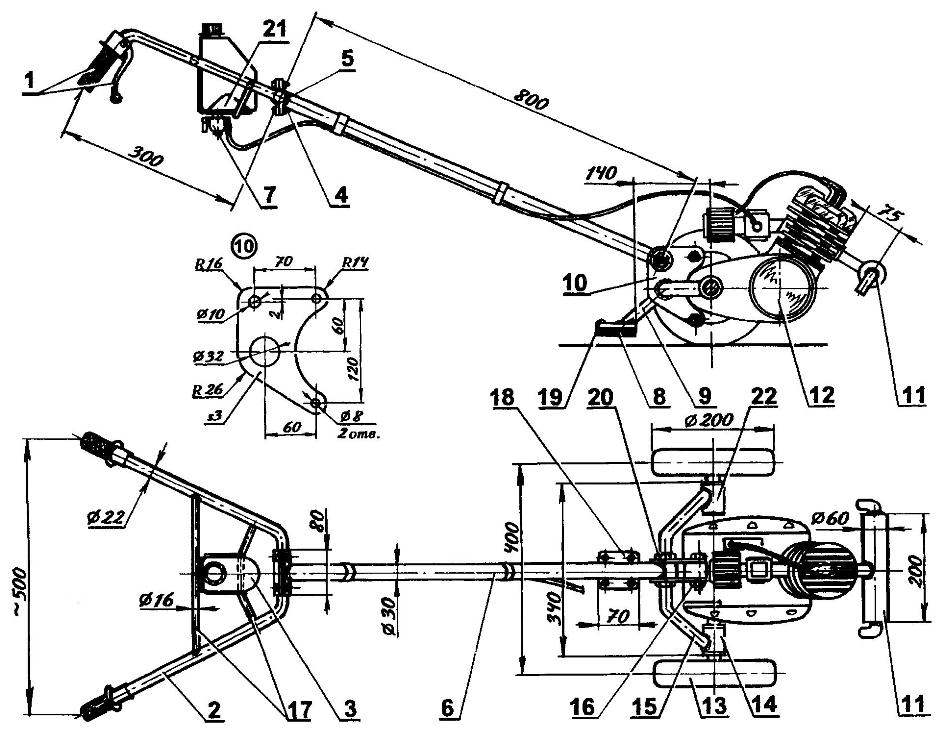 The braking device of mototada the same as a roller skate — “crutch” from the sole of hard rubber: just off the grip and lower handles and the tractor will stop.

Simplicity of design does not mean that it can be done without observance of technology of production — it will not work. It should be noted that the wheels are mounted in bearing assemblies, which is a slightly different Bicycle carriage. Refinement is making a new extended shafts. 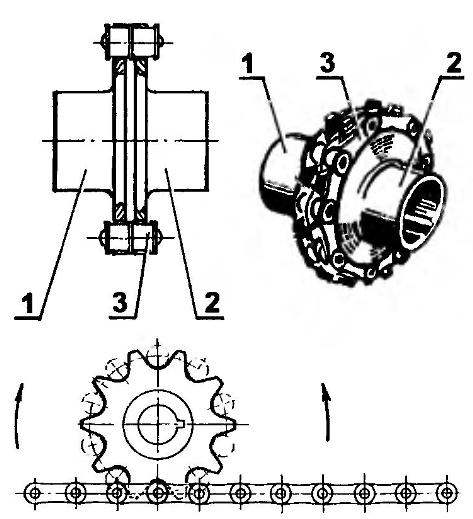 Coupling Device:
1 — driven half coupling (asterisk); 2, the leading half coupling (asterisk); 3— the connecting link (double row Bush-rankova chain)
Installation starts from the right (leading) of the bearing unit. The first thing to do is buy a star — the same as the drive sprocket of the engine. Then carve the shaft of this unit is its Central part should be the same as the shaft of a carriage, Bicycle and shanks to fit the footprint of the sprocket and drive wheel. After assembling the node is temporarily installed on the driving sprocket of the engine mounting bushings (they are both stars, ensuring their alignment), distance plates (the thickness of which should ensure an optimum gap at which both sprocket freely falls double-row roller chain) and three or four bolts and nuts.
Hereinafter, the production of components frames mototada, which consists of arc-cross member, bending of steel pipe with a diameter of 30 mm, and node of attachment of the engine, which is a couple of notched steel plates 3 mm thick. Cut in accordance with the configuration of the landing engine Assembly plates are fixed on it and a few welding points primatyvajutsja to the curve of the crossmember. Then the node is removed from the engine and the joints are welded completely.
The node is placed back on the engine and arc-cross-member is fitted to the body of the leading bearing Assembly. Arc-the rail and the housing primatyvajutsja to each other by welding points, and after dismantling the latter are welded completely.
Further, through the housing of the bearing unit is passed a suitable steel rod, it is mounted with a second bearing unit, is fitted to the arc of the crossbar and welded thereto. It is important to provide symmetrical arrangement of the bearing units relative to the axis of the frame.
Remains to install the engine on the finished frame, to connect the sprocket (on the engine on both the master bearing Assembly) ring double-row roller chain and clip on the shafts of the wheel and most of the work can be considered completed.
The shaft is a steel pipe with a diameter of 30 mm, to one end of which is welded to poluchaut it on the drawbar is fixed the wheel and the other sleeve. The wheel arches of steel pipe with a diameter of 22 mm; the horns of it connected by bridges made of pipes with a diameter of 16 mm. Between the ridges — the cradle of steel sheet of thickness 2 mm and intended for installation on a fuel tank. On the handlebars are fixed standard moped the engine controls.
Brake “crutch” is a piece of pipe welded to the arc of the crossbar, at the end of which is fastened by welding of steel sheet 3 mm thick; to it with four bolts and nuts screwed to the sole of a thick hard rubber.
The muffler is homemade, it is a thin-walled cylinder with a diameter of about 60 mm, to which is welded the exhaust pipe with the flange (the standard exhaust system), two bottom and two curved exhaust pipe. The inner part of the muffler is filled with thin steel drain chips well damping the exhaust noise of the engine.
As already mentioned, mototec easily turns the roller in a scooter can tow a enthusiast of skis, easily carries a wheelchair. However, for its connections with the tractor makes sense on the drawbar to make hinge joint — control of the composite vehicle will be much easier.
Instead of the wheelchair can be docked to the towing vehicle two-wheeled garden cart, setting it instead body easy chair — get comfortable four-wheel vehicle. And finally, metamagic is easy to turn into “mototalk”, securing the power unit on the bike instead of the rear wheels.
I. ZHUKOV