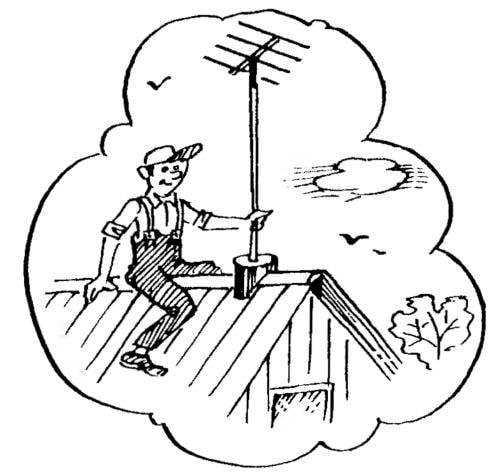 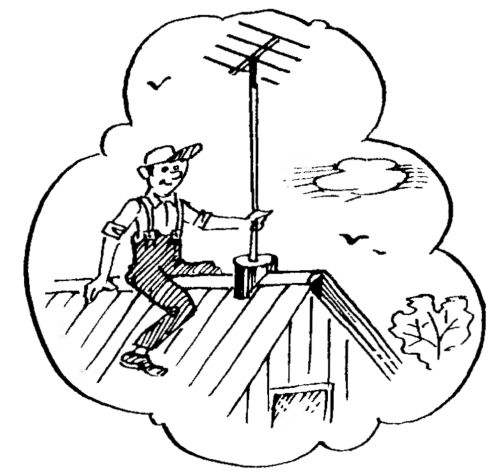 It is probably impossible to imagine a contemporary house without radio and television. But for good reception of distant stations, TV channels (as well as for individual communication on approved frequencies) need a good, raised high above the ground antenna. So, not to do good without masts. Only here where to put them and how to fix?
Of course, decide these questions differently. Some buried wood pitched the butt of the mast into the ground near the house wall, and optionally attach it to a rafter beam. Others erected almost a tower on the roof dealing with the inevitable holes in the roof. More prudently restore waterproofing of the roof, and in the case of the transfer antenna being spent on its repair.
But even the most experienced sometimes get lost when dealing with, say, ham radio Ground Plane for 144 MHz or TV antenna large sail. Difficulties beset at every stage of the installation (dismantling) of such devices. Yes and repair continuous problems. Only one podpiska cable, torn by the wind, requires a lot of time and effort, not to mention how to restore contacts in the junction box.
Problems poumenshitsya, if we use the simple and reliable technical solution proposed by hams 50 years. Promoting “ridge” installation of antenna masts on the roofs of houses, they recommended to use as a practical and compact base… a block of wood. of oak, elm, or, in extreme cases, the birch with a cut in the lower part adjacent to the roof (Fig.a). 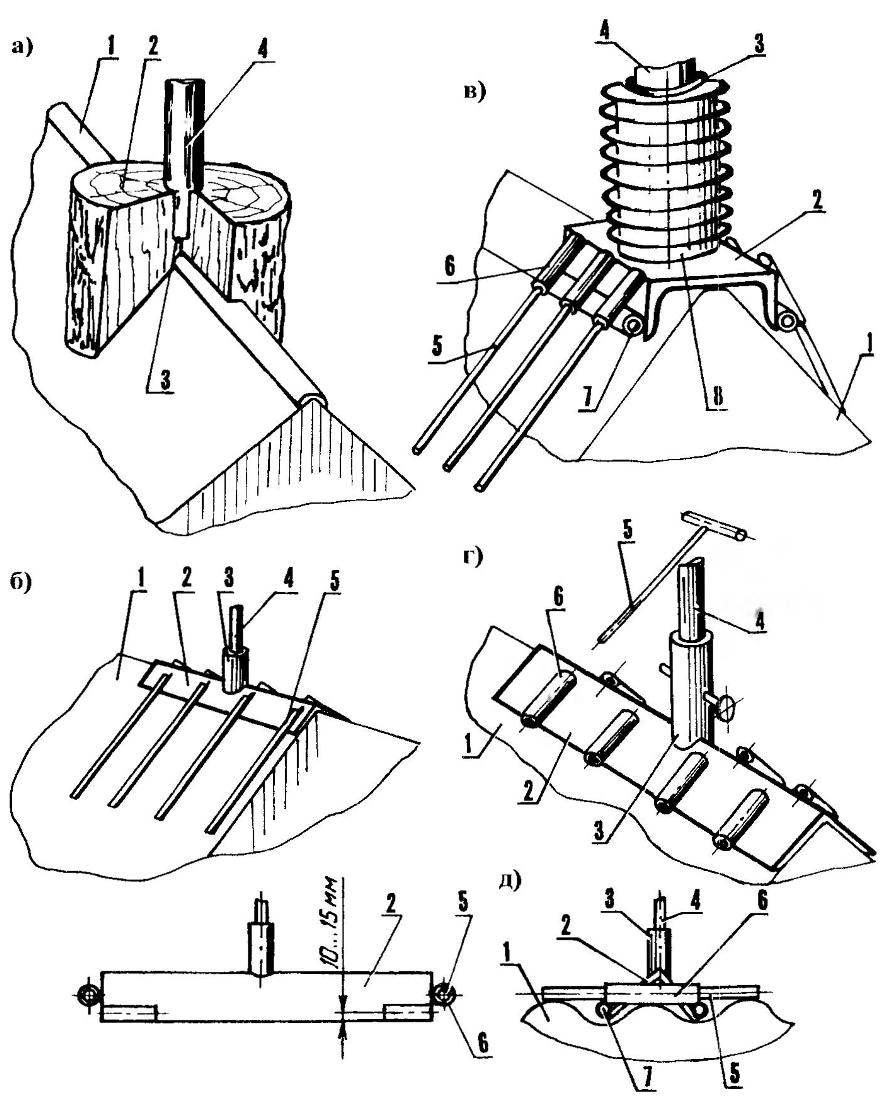 “Skate” mount the antenna mast on a massive base, invented by skilled craftsmen in 50 years (a), and the later versions with welded wolkow (b), channel telescopic extension and an insulator (in), T-shaped inserts (g), t ribbed lathing (d):
1 – roof; 2 — “the warping of the mast; 3— the nest of the mast; 4 — Macha; 5 – weld or iScan crossmember; 6-sleeve; 7 — stand; 8 — insulator of the antenna; number of weld-on and plug-in slepenkov, their dimensions and the dimensions of the base —at the place of installation
Indeed, despite the simplicity of this design has good resistance to wind loads. It is a pity that a block-basis in a few years become worthless, even if it is to protect moisture-resistant enamel, and even from the end and tinned the lid from a large tin can. In addition, during such installation of the mast can not do without at least three of the simplest wire stretch marks. But these, conventionally not shown in the figure, the stiffeners will inevitably entail a violation of the integrity of the roof, complexity of repairs and maintenance of the antenna.
However, the idea of using the slim ridge of the base proved very fruitful in the development of new variants of fastening of a mast on the roof. In particular, when creating unsightly in appearance, but is quite resistant to wind loads “cuttlefish” (Fig. b) allowing, without any stretch marks and damage to the roof to install antennas up to a height of 2.5—3 m. It consists of meter cut powerful isosceles angle (profile No. 6,3) in the base, to which is welded foot cross from the corner smaller, fit into hollows slate roof. For more than seven years such a “cuttlefish” is my reliable support of multi-channel television antenna.
However, to carry it up a ladder and mount on the roof still uncomfortable. So it has been more successful — sliding counterpart (Fig. g). Instead of corners, located in the slate slopes on either side of the ridge,’ is applied T-shaped elements of the reinforcing rod or tube of appropriate size. As needed you can insert them into the sleeves welded in a checkerboard pattern to the steel profile base. The result is the required bearing area and sufficient adhesion of the Foundation to the roof.
The owners of the Ground Plane for 28 MHz is addressed to the design (Fig. C) with the channel-based reference porcelain insulator and bushings welded from strips of inch pipes in which the extension of the support area of the inserted reinforcing bars or water pipes with a diameter of 3/4″. The distance between the inserts-selected cross fold wave of the slate.
If the roof shed gentle or quite horizontal, as, for example, veranda “southern” type, stand-a support for the antenna mast may serve as ugolkova-tubular structure (Fig. d). It is welded from the isosceles angle (profile No. 6,3) and cuts water-gas supply pipes a half-inch diameter. Like all of the options considered, the height of the mast and its weight is only limited by the strength of the rafters or slate, and that value is considerable.
V. Yashin, Tatarstan