Every time the whole family going on vacation, my task is to check the status of our bikes. As a rule, all the nodes are in order except for the tyres: they require periodic pumping. Here is sometimes hard, and much time is spent on it.
It was necessary to invent a device that would replace the pump. Its main components were borrowed from me… homemade siphon for aerating the water. The operation of the device is very simple. Carbon dioxide gets inside, it evaporates, creating a pressure that the tires necessary.

General view of the device shown in the figure. It consists of a housing 1, which is inserted into the balloon 2 with carbon dioxide, cap 3 which includes a needle 4 to pierce the tube spray. The housing is screwed onto the hose 5 of velencoso. Tightness of connections is achieved through rubber strips 6 and 7.

Needle to pierce the balloon with carbon dioxide made from a M3 screw length less than 20mm. he cut the head, make the blade metal a slot on the screw length with a depth of 1.5 mm (for passage of carbon dioxide), and then sharpen the needle. After you install the needle in the cap the locking of produce hammer blows on construction dowel, the tip of which crushes the thread of the needle and cap (POS.W, bottom). 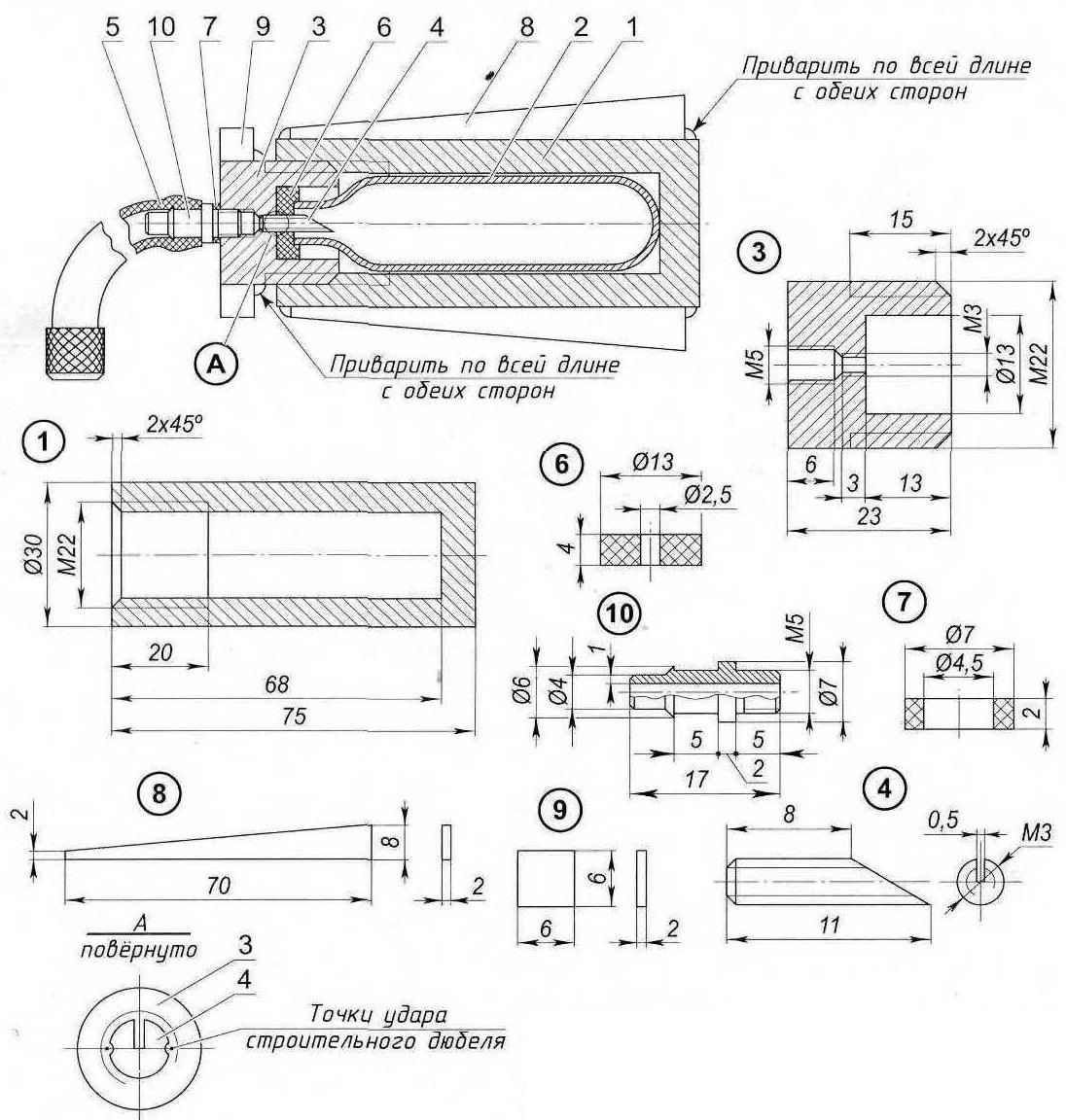 The outside cover is glued with glue “Moment” rubber gasket made according to the drawing.

The hose is also subject to alteration. With it removed the part that is screwed to the pump. Produce a similar fitting, but with metric thread M5. The hose is connected to the housing through a rubber gasket.

Work on the pumping tires is as follows. Spray with carbonic acid set in the body, it put on the lid and slightly screwed. Weasling connected with the cover and then with the nipple bike. The rotation of the body and cover achieve pricking the balloon with carbon dioxide. This will be proved by a slight hiss. After grazing the contents of the cartridge: Unscrew weasling from the bus. If the tire pressure is insufficient for normal driving, you will need to repeat filling it with carbon dioxide. If the pressure is greater than required, it is necessary to bleed the tire excess carbon dioxide.

This device can be successfully used for pumping of balls. It will come in handy lovers of water tourism, fishermen and hunters: instantly inflate the mattress or a rubber life ring, inflatable cushion seat. With this device you can also refill the spray can, accordingly modified.