Two world records set at international competitions in ship modeling Soviet athlete, master of sports of international class G. shahazizyan. It happened at the starts in the Bulgarian city of Tolbukhin, one of the records was blocked in the B1 class the previous results from 24 km/h! The event is really unique — even a fraction of a percent increase of speed required for approval of the record, are designers and athletes at the cost of tremendous exertion.
Now the record previously, by the way, is also owned by Soviet athletes A. Tupikina is 269,219 km/h!
It is noteworthy that such a considerable speed gain obtained by tuning the model. The main role was played by a truly creative approach to the theoretical study of the nature of the motion of the sports projectile, and to its design. And these two factors allowed us to create a model not only logical and perfect in its design, but also outstanding on road performance.
To offer to your attention the cord was tried for the novelty: an annular nozzle for the propeller. In 1985, with G. shahazizyan became world champion, and today he continues to experiment with similar propulsion. And the meaning this work have. Especially in ship modeling sport, where there are strict framework of limitations on the maximum allowable noise from travelling-in (or rather, flying!) model.
I hope that the story of the design principles and the record holder will be of interest not only to modelers, will help the creators of sports equipment for other classes and types to boost their results.
So the word of the Creator of the model.
When designing the cord a speed boat with a propeller it is necessary to pay special attention to the specific features of class B1. This requirement for static buoyancy, eliminating the touch a propeller the surface of the water, to the reliability of the start, the dynamic stability in flight with the obligatory touch of water at least twice per lap, to limit noise level within 80 dB, sufficient strength and rigidity with minimum weight. The main factors are closely interrelated, and this leads athletes designers constantly seek the best compromise solution. 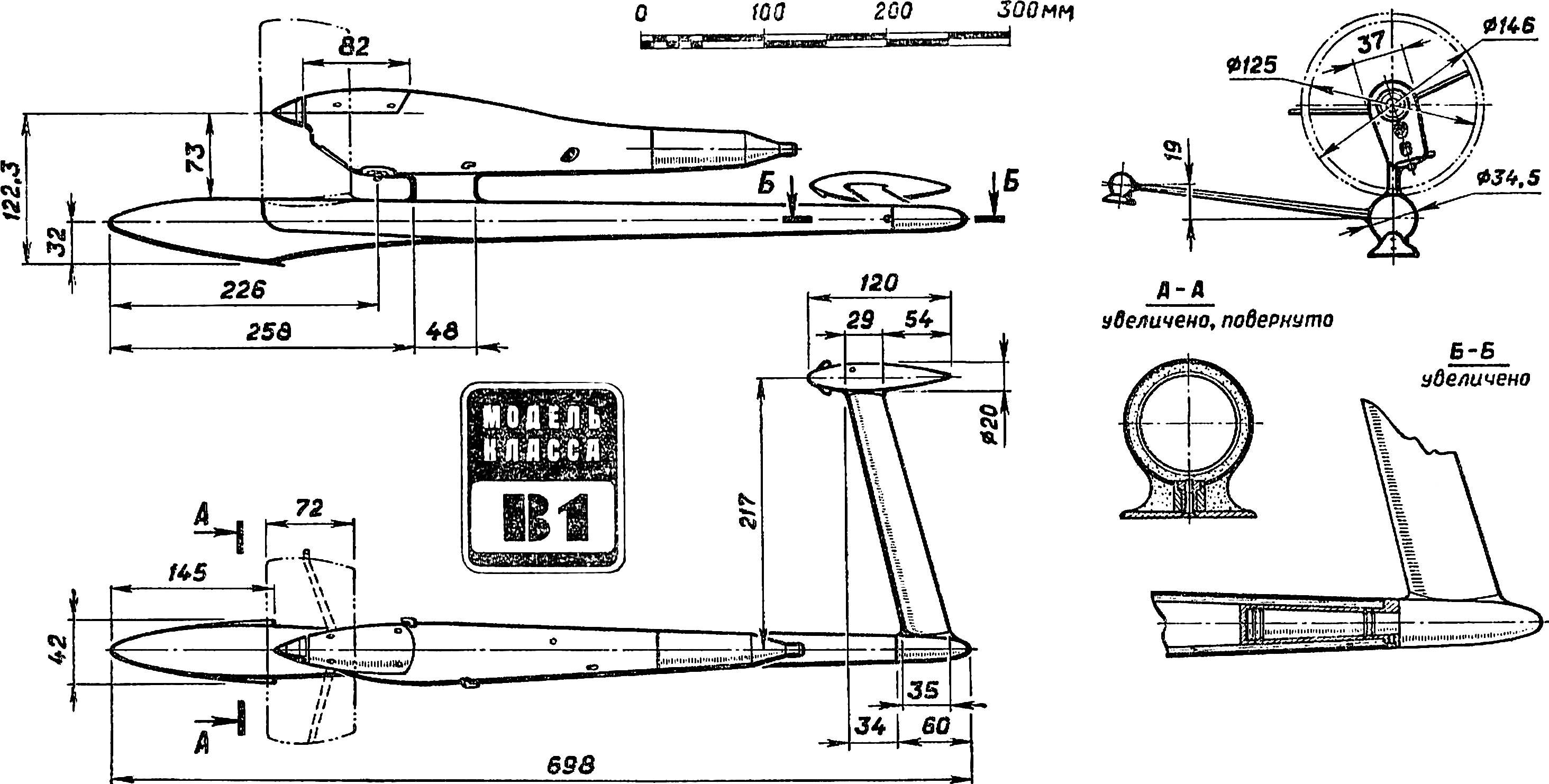 Record sudomodel.
One of the very important points which determine the motion of the model in the race is the impact of centrifugal forces. Suffice it to say that on the cord going at a speed of about 260 km/h, is affected by the centripetal acceleration of the order of 35g. Large amendment gives cord thread, therefore, to understand the question, you need to consider a single mechanical system “model — cord device.” First in motion around the riser because of the large distance it may be taken in the calculations as a material point.
Taking into account all the forces acting on the parent system (scheme, action of the forces shown in the figure), and after some transformations, it is easy to find the “critical” speed. It comes complete unloading force clamping control line to the surface of the waters, and in the ideal case when it is exceeded, the model proceeds in clean flight. Finally the formula for calculating the critical speed has the following form (notations correspond to the chart forces):
V*=sqrt((3q/2H)*((2P+Q)*(l2-H2)/(3P+Q))).
Substituting the specific values of the actual conditions, it is easy to find that, for example, when the mass of the model 0,5 kg critical speed V* will be equal to 255 km/h. it is Obvious that at high speeds, to satisfy the requirements of the rules on double taps water driving circle speed should have a negative (clamping) force. Its value is estimated by taking the value of N is less than zero.
Note that external disturbances (wind, waves, water, etc.), as well as the angularity cords due to aerodynamic drag and gyroscopic moments of the propeller and the engine contribute to the tap water and the calculated results are taken as a first approximation. 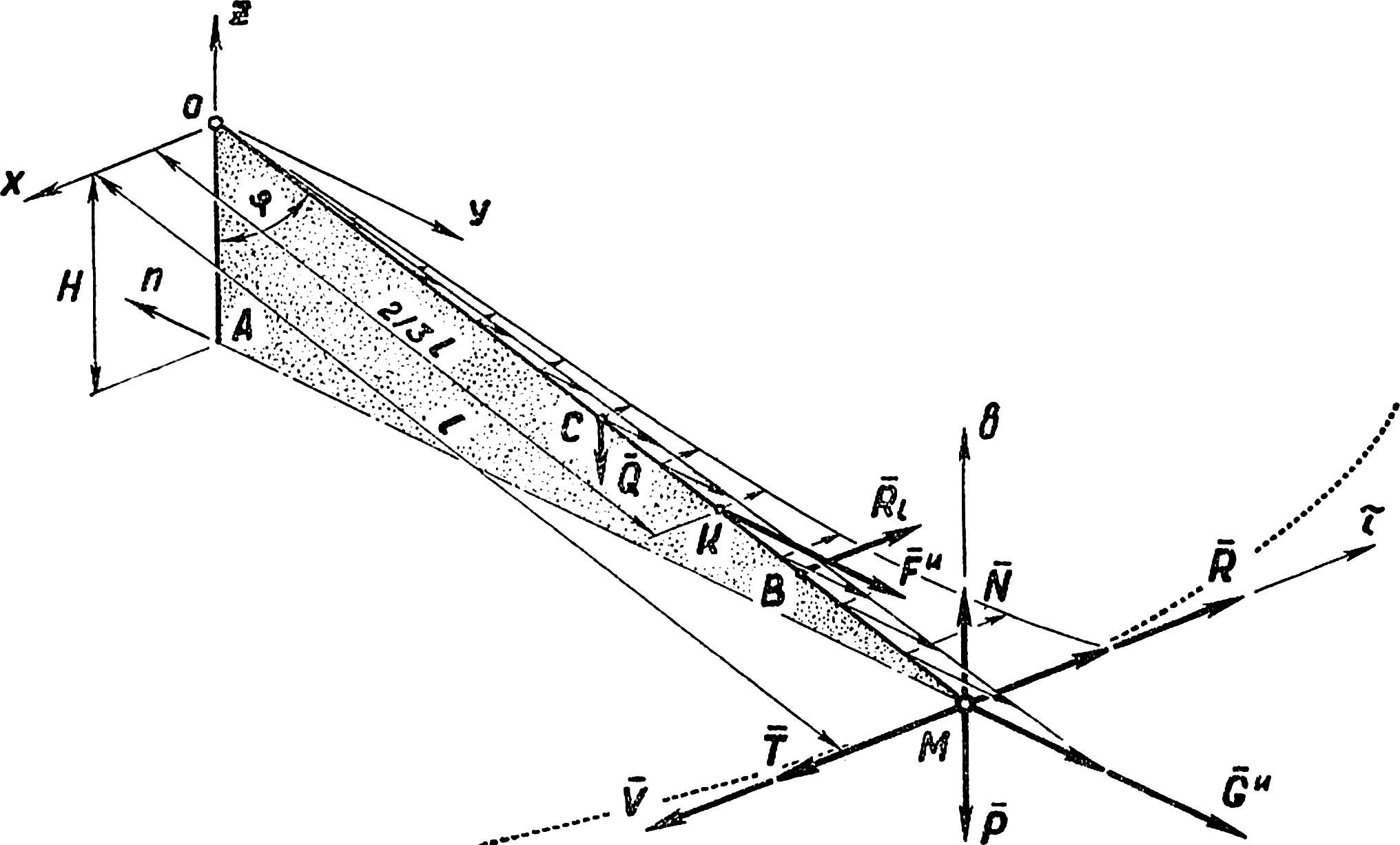 Diagram of the forces acting on the mechanical system speed sudomodel — cord thread.
Designations:
R — gravity model, Q — gravity cords, T — force of thrust of the propeller, R is the resistance of the model, Rl is the resultant of the distributed forces of resistance cords and bridles, N — lifting force model, GC — the centrifugal force of inertia of the model, FC is the resultant distributed according to a linear law of centrifugal inertial forces of the elements, cords and bridles, attached to 2/3 of the radius of motion of the model.
In the ideal case, the model must have positive lift when gliding and pressing — in a clean flight. To that and should strive in the design of sports aerolizer. Big help tell part analysis the functional purpose of each part, the node and element, only then can you begin to find the optimal design and technology. 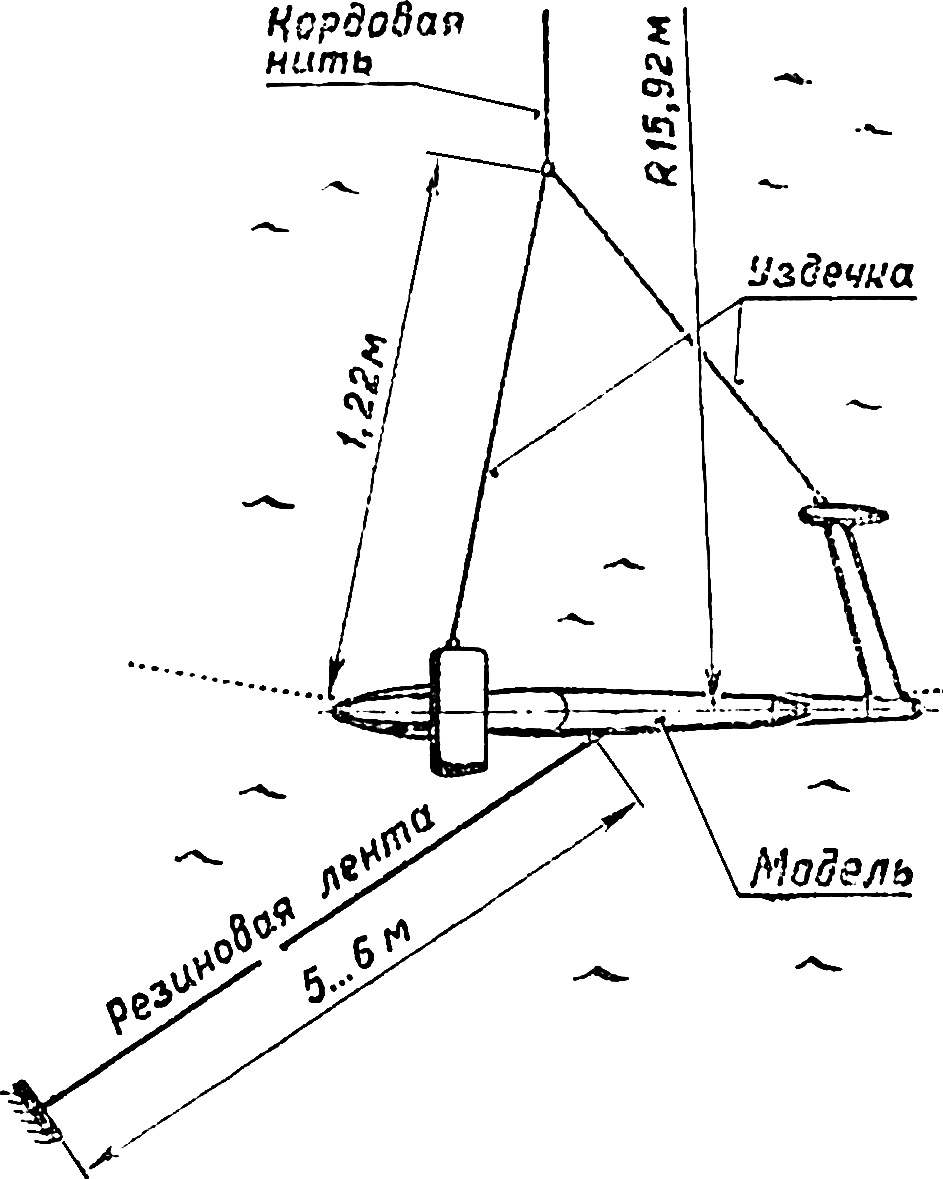