The first flight of kites I started to build in 1978. Dozens of options are made over four years, helped to define the tests, experiments and subsequent revisions to the best form and arrangements of the wing, to learn the subtleties of the serpent and its behavior in various conditions. All this allowed the “Acrobat” to become a highly maneuverable aircraft with high aerodynamic characteristics. Its design is highly durable. Snakes can fly in any weather, he’s good and confident performs aerobatics in almost any wind (4 to 16 m/s).
Among all niche known kites the best aerodynamic characteristics have aircraft resembling hang gliders. It is this Delta-wing was the basis of “Acrobat”.
Here are some of the baseline data needed for pre-calculation of parameters Delta-wing. It is established that the tension of the lifelines needed to control the kite, should be 2-3 kg. This rod can create a wing with an area of 50-60 dm2. The serpent surely was flying in the gentle breeze, the specific load on the wing must not exceed 1.8 g/dm2. Hence, it turns out, and optimal mass of the snake — no more than 110 g.
From the classic wing, aerobatic Rogallo snakes differs only in the elongated Central rail — this is done to improve pitch stability. The angle between the side rails-the side members is 156° and is optimal. Lateral stability provide elevated relative to Central rails, the ends of the wing spars.
Already at a wind speed of 5-10 m/sleep snake will impact a significant burden. Below the frame is not broken, it is necessary to make it elastic, and wing — self-regulated changing the angle of attack with increasing wind. To solve this problem helped spring that connects all three of the spar. When the wind speed starts to increase, the wing sweep increases, respectively, increases and coolest. In the end, the installation angle of attack of the wing decreases and accordingly decreases its lifting force. Consequently, the tension of the lifelines of the control is kept constant, independent of flow rate.
AN EXEMPLARY SYSTEM FOR KITES OF THE TYPE “ACROBAT”

In the first versions of “Acrobat” strong wind caused the wing flutter. The vibrations helped to remove the “perforated” baffle — a series of holes Ø 5 mm on the line of the 1/4 chord of the wing.
A kind of stabilizer is the tail of a snake. Its length is 6 m. If you make the tape shorter, the unit would lose longitudinal stability, longer — significantly worse handling.
From aerodynamics it is known that at the turn of the aircraft the lift of the wing decreases as the free stream begins to flow around its surface with a slide. Used on aerobatic snake bridle provides an increase in angle of attack with the introduction of the snake into the turn and therefore increase the lift. Thus, it allows the snake to maintain a constant speed as when performing turns and straight flight.
It is controlled by two rails with a length of 70 m to Use longer makes no sense — it will lead the delay of commands and inaccuracy of transmission.
Work on piloting the kite, start with the manufacture of metal parts. First of all, Flex spring hinge — it will require a wire grade optical fiber Ø 3 mm. wire. the same brand Ø 2 mm, do the two-axis joints, and OVS Ø 1 mm — two hook of the latch, the nose and tail of the spokes, and the rear of the carbine.
For fastening the side rails-the side members will need four tin tubes with internal Ø 3.5 mm; two of them are sealed on one side, and the other two soldered hooks of the clips and the hinge ears of tin with a thickness of 0,6 mm.
Reiki-spars — dry-grained spruce. After pre-processing them thoroughly and cover with vasculat Amalita. It should be noted that the side walls have minimal lateral dimensions and are at the limit of strength, so you should not reduce their section.
The Assembly of the frame, start with the installation on the Central spar of the nasal spokes, and springs, and the rear spokes and carbine. The attachment points are fixed by thread and glue. In the same way fixed to the lateral side members tin “cups”. 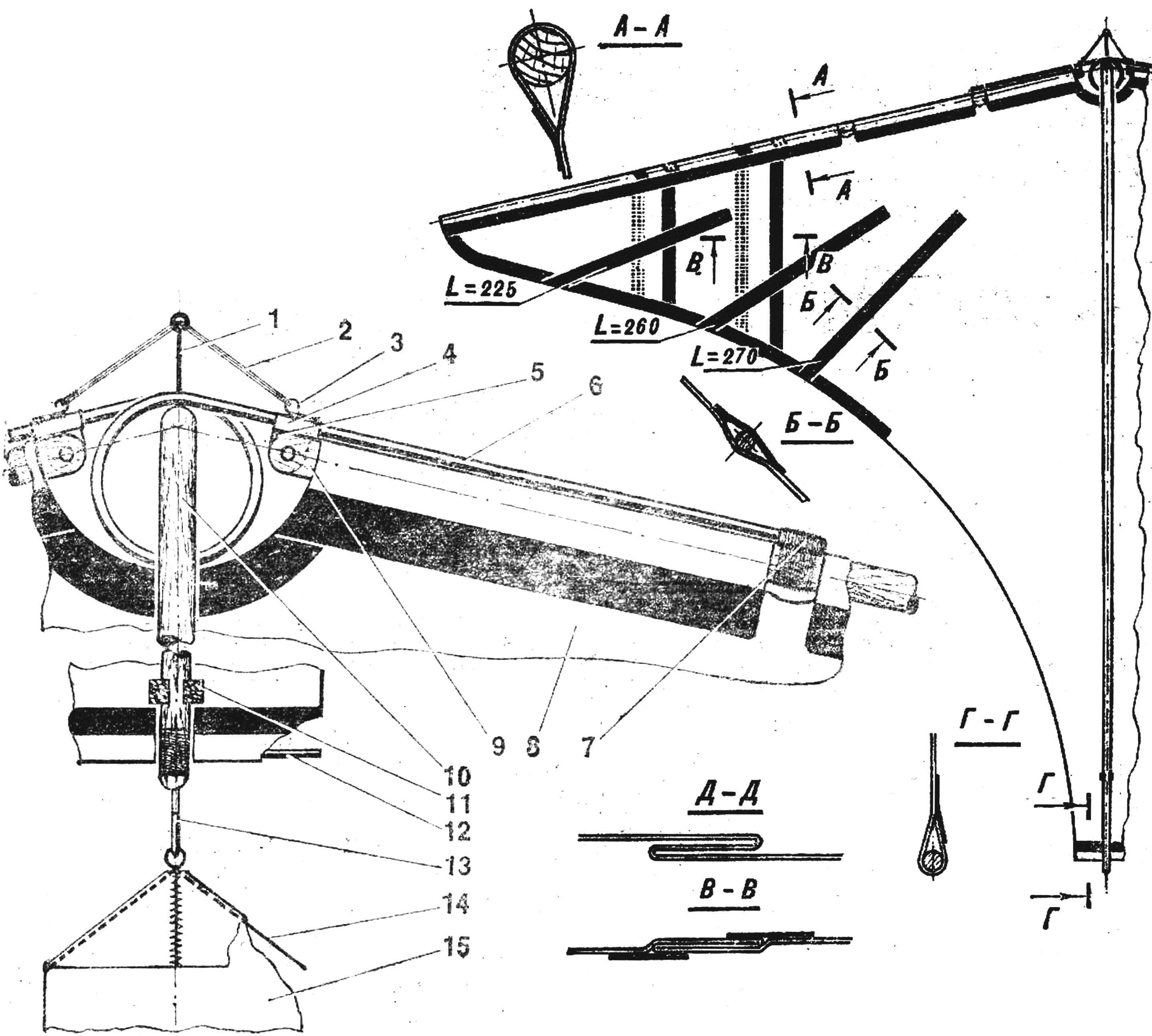 Design snake flight “Acrobat-5”:
1 — bow-spoke, 2 — latch, 3 — hook latch, 4 — tube hinge, 5 — ear hinge, 6 — Central spring, 7 — Cup, 8 — sail on 9 — side rail-side rail, 10 — Central rail-spar, 11 — balancing weights, 12 — caudal needle, 13 — rifle 14 — figure bracket, 15 — tail contribution.
Further, in the slit root parts side rails-the side members to insert the axles and put them on the hinges, after which the side walls are put on the “mustache” of the Central springs and tighten, as shown in the drawings, the rubber thread.
The shell of the wing (sail) is glued from the Mylar film with adhesive tape — Skoch. This sail has only one drawback — low, especially in frosty weather, flight resource — no more than 50 hours.
In the latest versions of “Acrobat” was used a sail from a fabric of type “Bologna”, which has greater strength and durability. But this fabric is hygroscopic, so in rainy weather the device is heavier and flies “reluctant”. After flying baloney sail will dry. For the first flight of kites it is better to use a thin polyethylene.
Securing the sail on the frame, try to kite as a glider is correctly adjusted, it should fly at least 20 m. If the “glider” swooping, hook on its tail a small weight — a small strip of lead.
For the bridle you will need nylon thread or fishing line with a length of 4.5 m. Tie the ends to the side rails, and mid — Central. Lift up the serpent in two is formed. ring and hang it so that the nose AIDS touched the floor, and the tail was raised to 50-80 mm. In the points of suspension must not enter into the loop — to attach lifelines management.
The tail is a nylon tape with a Width of 70 mm and a length of 6 m. For its fixing to the tail carabiner of aluminum wire 0 2mm bend curly bracket. Strong arms to do anything — when the toe bends and snakes aluminum loses only the tail, but does not break.
Lifelines of nylon fishing line. The main requirement to them — strength: everyone needs to endure at least 5 kgs. Lifelines are attached to the bridle with carbines, their free ends are connected by jumper length 1.6 m, the ends of which the handles must be mounted UPRAVLINNYA — cuts dural pipes Ø 12-15mm and a length of 70-80 mm.
At the first runs, don’t forget that “Acrobat” sensitive literally .every movement of the handles.
To learn control of the kite and to learn the first maneuvers best at a wind speed of 5-10 m/s. Stretch of rail on the ground, in the wind, connect them to the bridle attach to the main spar of the tail. The assistant lifts the phone up to shoulder level and holds it for the Central spring. The pilot throws the jumper in the back, picks up the control knobs, pulls up the thread and gives the command to start. The assistant lets go of the kite a little push upward. 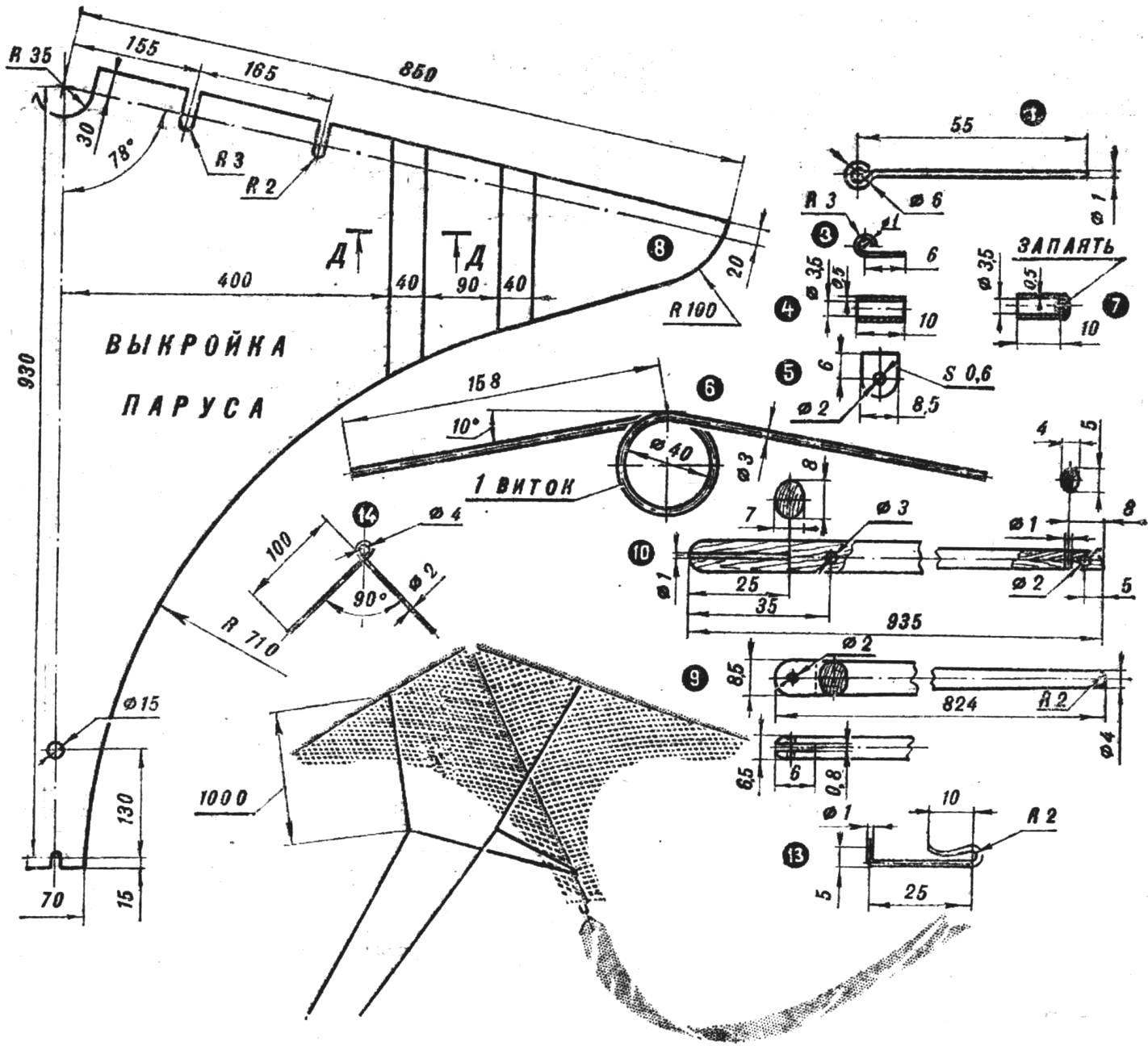 Up in the sky, he should smoothly. gradually picking up speed. The deviations from his course, even minor ones, need to respond fast, but blurred movements of the knobs. After the climb, install “Acrobat” strictly downwind and note the location of the handles. If they are not on the same level, after planting be sure to cut one of the rails.
Control of the aerobatic kite is not too difficult. If you pull, for example, the right guard rails, “Acrobat” begins to turn to the right, stand up to re-align the control knobs as it will fly straight in the direction that he was asked.
Loops are also tension of one of the rails. Starting to make a loop, not even a pen as long as the snakes don’t come out of the dive and begins to climb. After making several loops in one side, expand it and do the same in the other direction, thereby to unwind Leer. Try to keep loop were round, and used their performance to automaticity. Try it in certain phases shattering to include straight flight, it will make the loop “square”, “triangle” or “hexagon”.
COMPETITIONS
With aerobatic kites can hold competitions in two types — driving, and aerial combat. For these contests will need area 100X100 m.
Here are the basic rules.
To participate in the competition but in aerobatics, the athlete may use no more than two kites.
Length of rails — 70 m. the Participant is allowed three transcripts of the flight, and each of them in two attempts. Count one flight, in which the serpent rose to an altitude of over 25 m. the Attempt is considered to be used in the case when for a judge declared a three-minute working time the kite fly has not begun. The three-minute duration of working time shall be calculated from the time the start.
To perform a flight program participant will be given 10 minutes, including the time spent on the takeoff and landing (start from the moment of takeoff). Throughout the flight, the participant may attempt to execute any figure only once. Shape or group of shapes are not evaluated if the athlete, managing a serpent, broke the sequence of program execution did not finish shape from the expired ten-minute flight. If a kite when performing the figure touched the ground, then this and subsequent figures are not counted. If in flight there was отделеш1е any items from serpent, the result of the flight will be cancelled.
In the distribution of transcripts of seats takes into account the amount of points scored by the athlete in a best two of three flights. In case of equality of marks from the first two participants, the winner is determined by the sum of three flights. A set of figures drawn up by the judges before the competition and be announced to the participants two hours before the draw for the first round.
The competition in every aerial battle involving two of the crew. In the failure of one snake is allowed to use in one battle, no more than two spare kites. The goal of air combat is to set the maximum number of points for the visual intersection of the tail of the snake enemy and the time its th kite in the air. Do not install devices to naneseniya damage a snake of the enemy.
The pilot cannot go out during the battle from a circle with a diameter of 5 m, and the mechanics inside the sector, where is the fight, without permission of the judge of the competition. For violation of this rule the member is reprimanded, and in case of repeated violations, he should be disqualified.
Start is as follows. After the call to the launch pad crews are provided with a three-minute preparation time, after which the command “Start”.
The air battle lasts 5 minutes and ends with the command “Fight is over”. Points are scored in the following way: for every second of flight — 1 point for each intersection of the tail of the enemy — 10 points, a second Sha-walking snake on earth is given 1 penalty point. The final result is determined as the difference of scored and penalty points.
A. MILORADOV