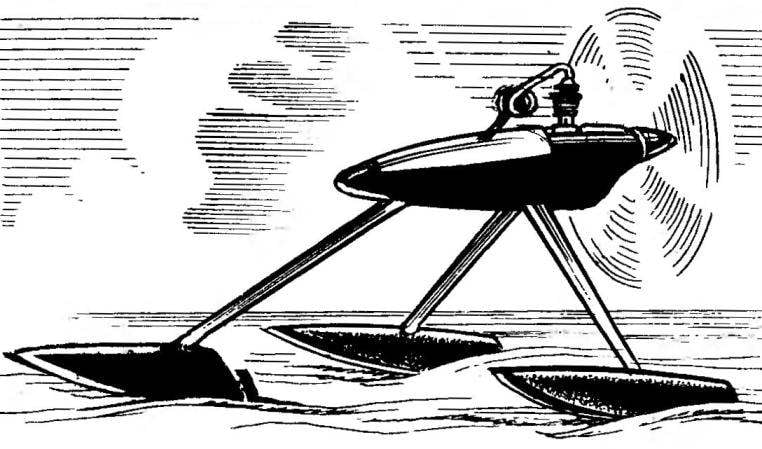 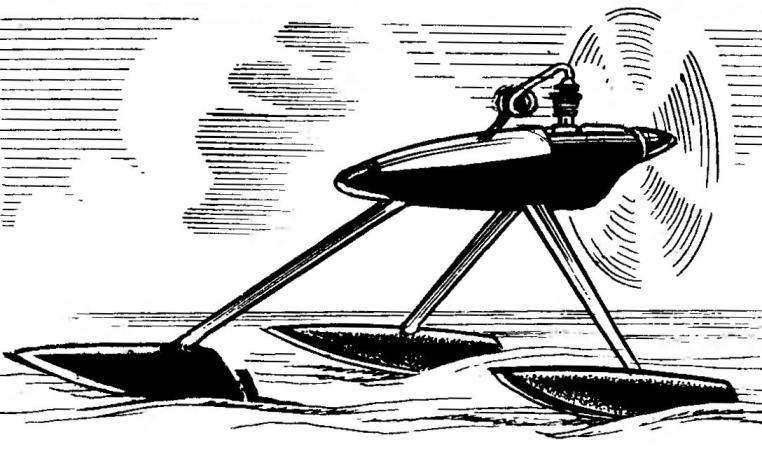 In recent years, almost all types of modeling in our country is clearly a noticeable trend away from pure sports fields design in the direction of almost amusement equipment. Most obviously this applies to cord classes. Therefore, to force the students to do, for example, high-speed gliders of the group A difficult. Your imprint is applied and undoubtedly changed the psychology of the modern boys and the impact of adequately presented in the catalogs, modelistica stores and in the RC circles, and another that looks more attractive technology.

Particularly acute problem of the attractiveness of the work arises when searching themes for creativity the beginner. To try to explain what contour “promocode” is interesting only at the first, and then the risk in the future to lose credibility mentor. Give the newcomer something more complex as pointless — insurmountable difficulties only repel the boy from training the hobby forever.
In fairness it should be noted that in the journal “modelist-Konstruktor” to find a solution to this very acute problem is given much attention. Over the last five to seven years, it published some pretty interesting materials, whose main task was to give the boys and leaders of circles mutually interesting topic. A number of articles, for example, talked about the design microshadow with engines running on carbon dioxide. Enough with all the scornful attitude to such devices of the venerable athletes, even they do not deny the advantages of these motors. Ease of handling and launching, a satisfactory capacity and reliability of the same domestic DP-0.3, the opportunity to create for them a very attractive model — this is not a complete list of advantages of the “children’s” engines.
A number of publications in the “Modeller-designer” (not only dedicated to ship modeling subjects) prompted us to develop that has no analogues in the scheme and, according to the boys club, more than attractive, his idea. So today we present to readers our tracheoplasty the airboat, designed for the installation of a domestic DP was 0.3. It is a pity that, according to our information, he is already out of production. However, produced in large quantities, he preserved in many circles and can now find a very good use.
We offer to your attention model is designed specifically for semi-built. Of course, will not be easy to replicate it in a single instance. However, a number of elements, such as three-dimensional cones, in any case, the most convenient to perform a method of hot drawing of sheet plastic. And this requires homemade devices, even the simplest, which fully justifies itself in the manufacture of small series. In his scheme, the new airboat is more than a simple and quite feasible.
Do note that from the widely recommended the use of foam we refused deliberately. Convenient and easy processing for experienced athletes, he absolutely abhors the hands of beginners. In addition, even well-made parts after the first launches are gaining a lot of dents that become clogged with dirt, turning the initially clean model in quite a bad product. External finishing of any foam porosity is a technology that is completely unacceptable for students and inexperienced modelers in General (here, we exclude options such as “put on the foam parts two-three-millimeter layer of epoxy putty, and then gently Polish the surface”), So settled on another material, classic models — the celluloid. Although now much more common polystyrene, gluing it is capricious and unreliable compared to celluloid, and in our development of integrity of adhesive joints have to prioritize.
As can be seen from the drawings, the airboat has three outwardly quite similar float; the power circuit of each is almost identical. The outsole is made of celluloid thickness of about 1 mm. Heating of the sheet billet in boiling water, its just putting on a simple wooden form and smooth soft linen cloth. Volume as parts of the floats, called fairings, pull from a wide film with the washed emulsion in a known manner on a wooden disc. When working with such thin sheet plastic, which quickly cools in the air, useful together with tape to warm up and disc. The surface of it before work should be cleaned from dirt and irregularities and covered with a light layer of engine oil. After drawing the details of their inner surface should be degreased, but slide the heated plastic on the disc in this version is much better and the quality of the fairings is obtained higher up on the surface will never appear the traces of the layers of wood.
Stand floats differ only in length. In principle, the blanks are exactly the same size. Only when fitting a particular model to be specified their length. All racks have a streamlined teardrop cross-section. The construction and external finish is not difficult. But the task of mutual adjustment of the uprights to the Central node of the main body, and the exact frame in the finished floats is not simple. Help fixtures-jigs that simplify all fitting and Assembly operations. With their help it is easy to precisely match the bevels on the ends of the struts, and special markings on the exhaust to cut blanks and Windows for the passage of struts through the film spoilers. A single building model, you will have to put up with the forced culling of the nodes, and the need to putty the inevitable gap (floats are required to be sealed). 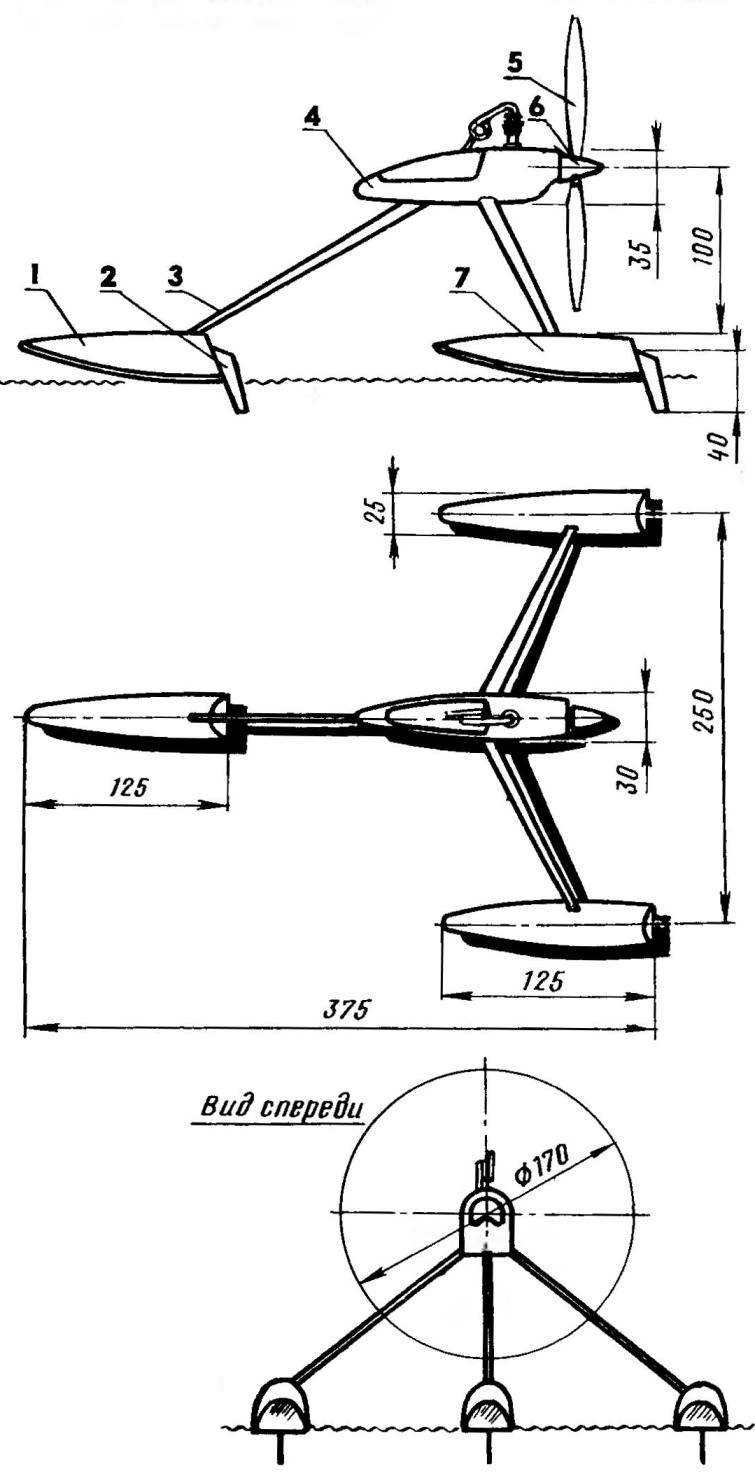 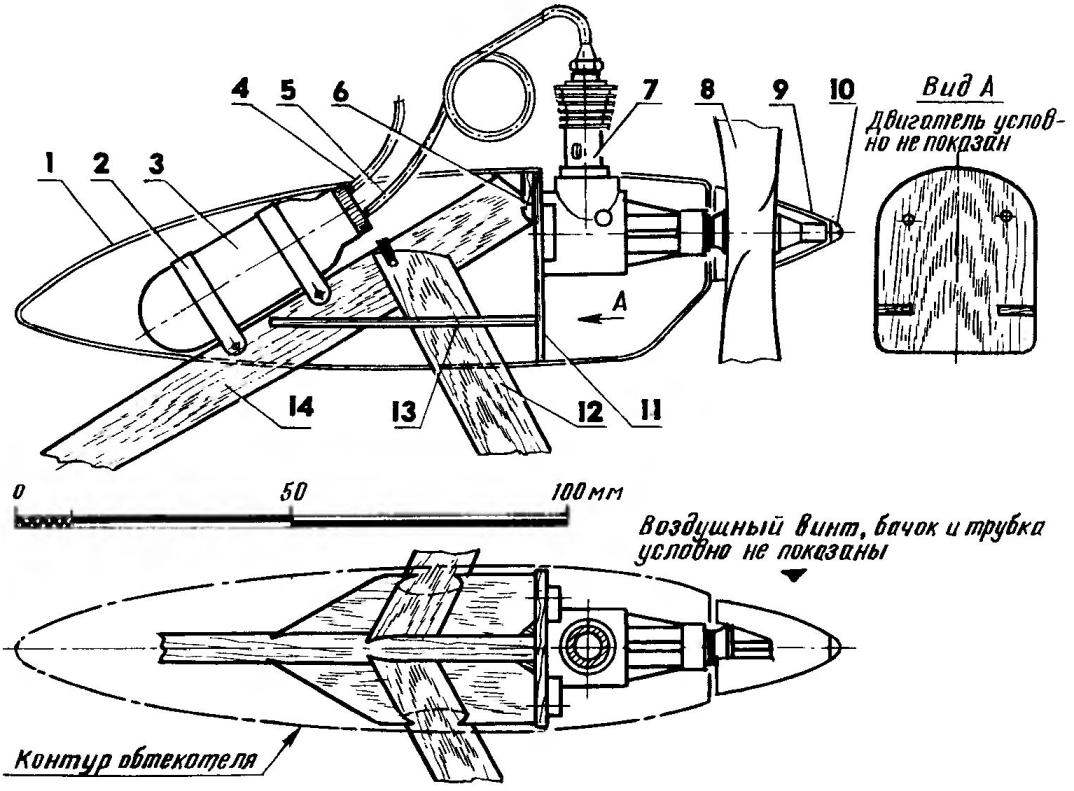 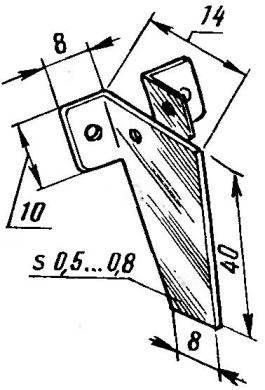 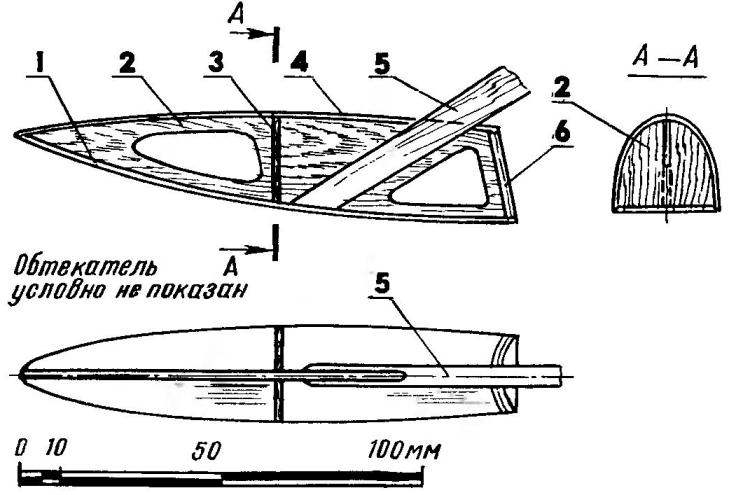 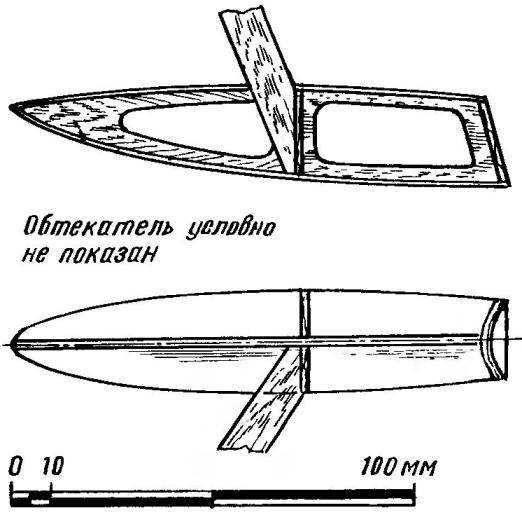 Right rear float (left — “mirror”).
Before docking all three floats with the compiled Central node is useful once again to check the sameness of the angle of their installation in the view of the model top and side. Otherwise, to achieve good smooth running will be very difficult. Of course, all Assembly operations are carried out using nitroblue. While the external finish of the wooden and plastic parts of the model apply only nitro lacquer and paint (or enamel).
Lacquered knot with floats and rudders on the transoms after installation of the engine and its “fuel system” represents a ready to run model. It is useful at this stage to conduct sea trials, so not had to introduce changes in vzaimoporozhdeniya the main elements of the glider. If at full fuel tank and adjusted the engine mode model easily goes on plane, straight and steadily goes on the smaller the wave, then everything is fine.
Now you can start drawing and manufacture of the fairing of the main body of the glider. The figures given only the simplest version, based on technology that is close to work on the floats. You can give full rein to their imagination. The only requirement is not permaglide this detail. By the way, a fully assembled model with the engine we have has a mass not greater than 50 g. Here, as in any planing vessels, the competent law: the easier under other conditions the device is, the higher its speed and the more reliable it is in motion. Oddly enough, from a General balancing of the proposed variant of the model depends very little. But the need for careful adjustment and deepening of the rudders need to be mentally prepared. For fun, you can do a modification of the form or schema of retinoblastoma on each of the floats, and all trial drafts can easily be implemented using ordinary clay.
So, glisser (or several) is constructed and tested. Now it would be interesting to conduct some competitions. And there is also no any restriction. The range of the straight for one filling, precision passing “gate” on the basis of dimensional, speed tests or any combined these options “on the shoulder” of similar equipment.
Its very important all season. Pond, lake, shallow “puddle”, even built on the camp site of plastic film and wooden boxes, or indoor lap pool — all competition with these boats attract a lot of fans and spectators.
But most importantly: having mastered such microcode boys tend to stay in the circle, gradually moving to more complex techniques. And even as experienced craftsmen, they are not ashamed to think about their first models.
V. SHUMKOV,
the head of the circle