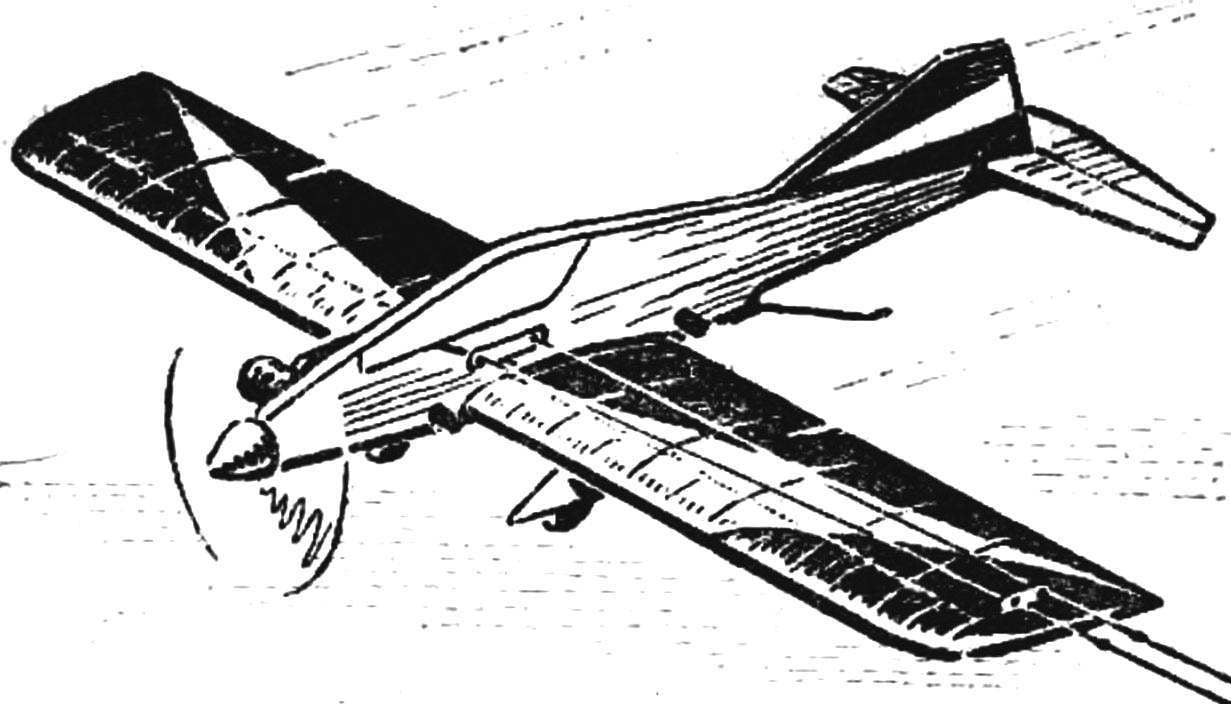 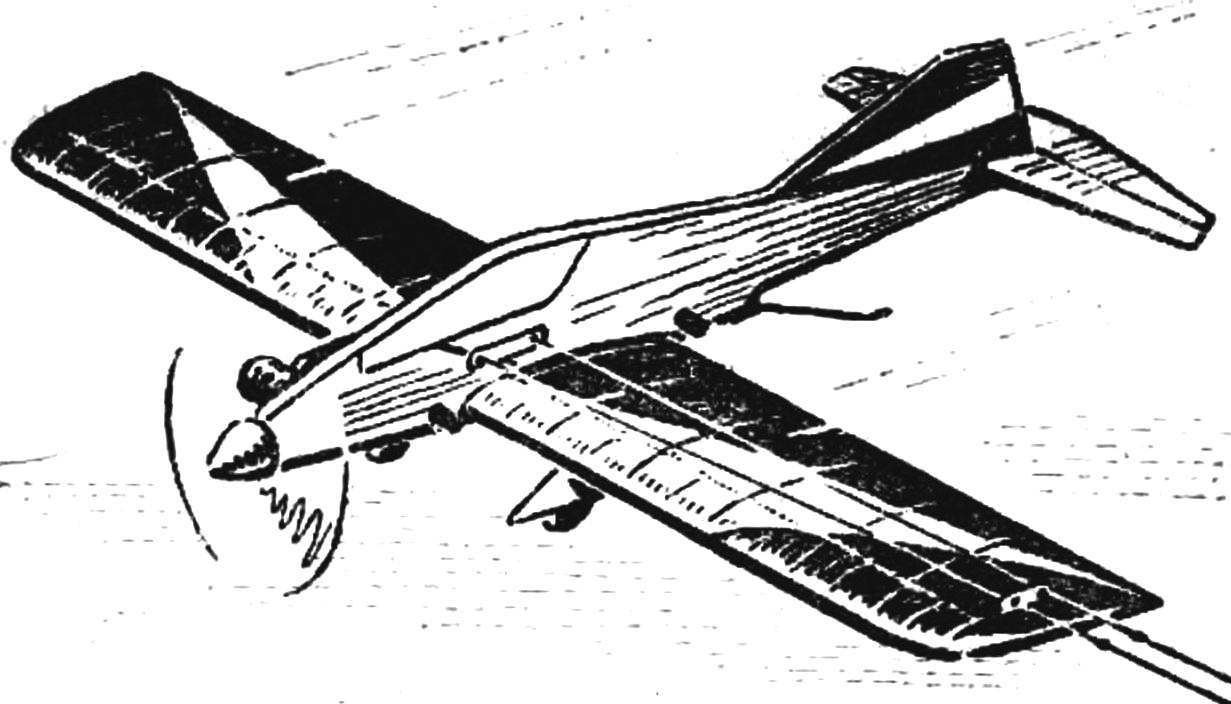 Develop some automaticity in managing the cord of the model during takeoff and horizontal flight, you can begin to build more complex apparatus. It will help you to learn how to perform all the basics of flight complex: forward and backward loops, turn and slide flight “on the back”. Unfortunately, your first robust model of these figures can not do too heavy reinforced design. Therefore, flight training is based on a different principle: the minimum weight, which gives good flight characteristics at maximum ease, which will allow you to repair the microplane for a few hours and re-enter the track or in the field.
Manufacturer model start with the most time-consuming part is the wing. Make two of them at once. Time and effort this will require a little more but have a spare you will appreciate, once the model will visit in an emergency situation
Harvesting rib cut-out mm plywood or fake plates 2 mm thick. Holding a stack of blanks between the plywood templates of the profile of the wing, drill two holes of Ø 3 mm and pull the package of bolts of suitable length. A knife and a file handle pack of hacksaw and cut the grooves for the shelves of the spar and edges. Examining the ribs, don’t forget to number them. Numbering will help you gather smooth, without distortions and twist in the wing. Lightening the ribs, do not touch only the two Central, which are highly loaded rubber band wing mounting. Take an extra nose ribs, using as templates ready end rib. It will improve the aerodynamic characteristics of the bearing planes.
For the longitudinal set of a wing, choose a pine or spruce slats without ROE, knots, curvatures and strong molestati. Check out how sit on the slats of ribs: gaps should not be, but too tight to score them. Having marked longitudinal set on Amalia glue or epoxy frame. Will remain to cover the gap between the Central rib plywood (1 mm layers of the shirt along the scale) and set the ending cut out of plywood with a thickness of 2.5 mm. Lugs, connecting the ends of the shelves of the spar and support the ending, twist of lime. Downloading the outer end of the wing (20-30 g) and kleiv guide for a cord, viscoride the whole frame and fit an wing Mylar film on glue BF-2 or Н88.
The fuselage is planed from the Linden or aspen Board thickness 10 mm, with the tail it is thinner at 4mm. In principle, it is possible to confine the paste over the nose thin plywood and install the plywood bed of the wing. However, the appearance of a model can be substantially improved without significant losses in weight. To do this, stick desyatimillimetrovogo plate foam PVC on the top side of the Board, treat it and turn over two-millimeter lime. It remains to fit the fuselage with paper and paint it.
Embed in the propyl of the fuselage keel out of plywood with a thickness of 1 mm. It is in General a noticeable effect on the flight will not provide, but will improve the appearance of the model. Wkleic bars engine mounts (beech 10X10 mm), pins for binding wing (beech Ø 6 mm) and cut the groove under the rocking control, engage the horizontal tail. 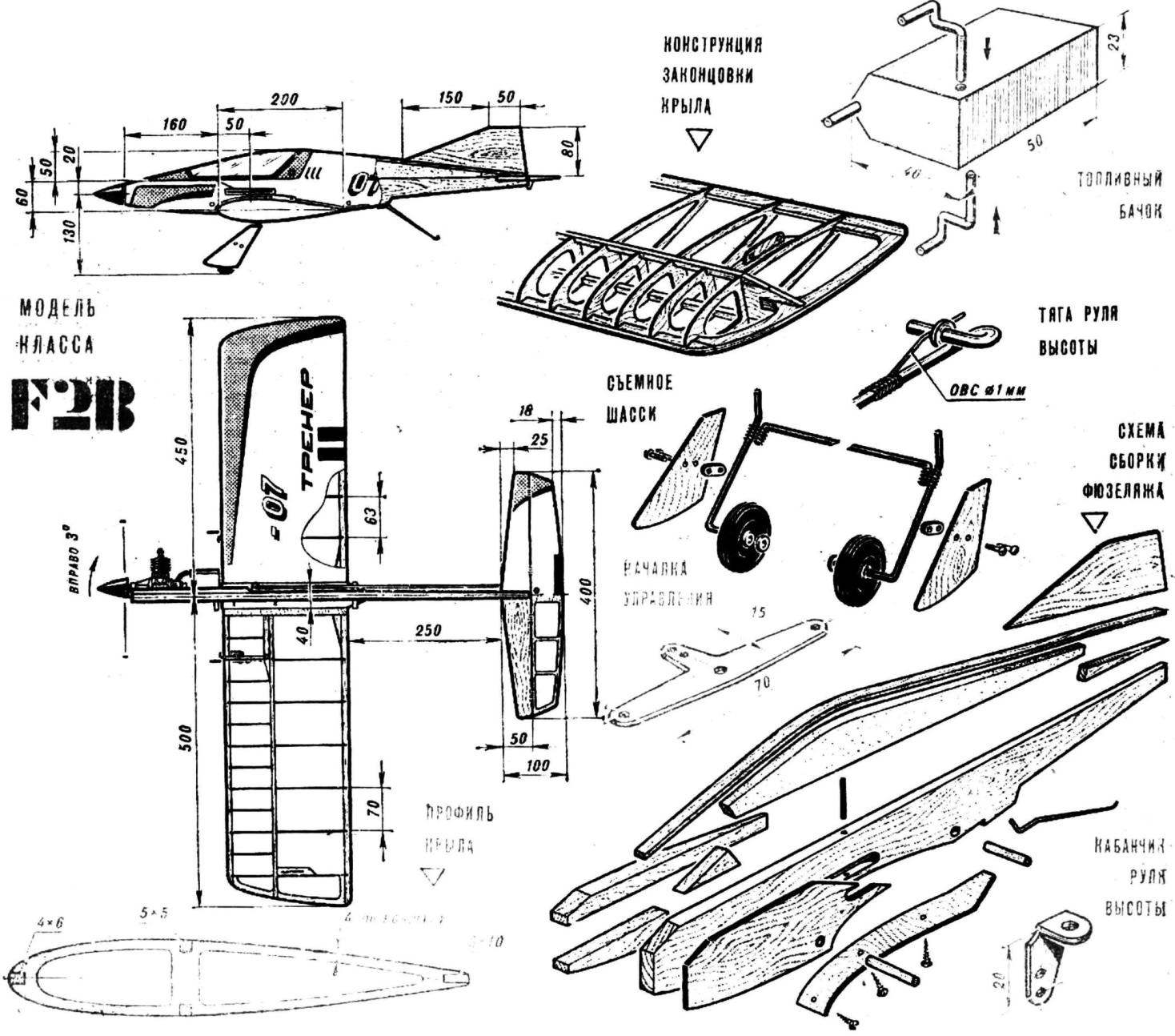 The stabilizer of lime plank thickness: 3 mm Grind it to the ends and to the front edge of 1.5—2 mm. the Elevator fabricate from plywood thickness of 2.5 mm. to Facilitate it and whether how it turns out after final Assembly. This way you will be able to compensate for errors in the alignment of the device without additional loading it up with lead.
Wkleic stabilizer, wing bars engine mounts on the crankcase of the engine, mark and drill the motor feet holes for the screws of its fastening. Tying a rubber band the wing, installing the management system (rocking of D16T with a thickness of 1,5 mm; rod pine rack Ø 5-6 mm with taped segments of wire OVS Ø 2 mm) and the engine with a propeller and tank, check the position.) the model’s center of gravity, securing polegshennya handlebar heights., you. If alignment is equal to 15-20% of the chord of the wing, all right. However, more likely to back alignment. In this case, lighten the wheel, fit an its a Mylar film and sew nylon thread to the stabilizer. Picking up the shoulder of the horn, make sure the steering wheel deviated up and down at an angle approximately equal to 35°.
Lacquer with Amalita all items not covered by the Mylar film, and the model ready to fly. Before the first start it is better not to paint, and this will complicate the repair. When you feel moved pilotami “you” can do and finish nitro or synthetically mi enamels. Don’t forget that the majority of paints it is necessary to add a plasticizer — castor oil, about a teaspoon per 100 g thick enamel.
The engine of any brand with a working volume of 2.5 cm3, better KMD-2,5. Good results were obtained with standard plastic propeller 248X130, trimmed in diameter to 220 mm.
As for the chassis, then for training I field (most common) fit a simple bracket from a wire OVS Ø 2.5 mm, sandwiched by the legs of the engine and protects the wing from hitting the ground when landing. If nearby there is an asphalt Playground or a track, can be, increasing the beam flange in the Central part of the wing to paste a coiled thread tube. If desired, inserted “horn” wire landing gear.
The model flies cords of OVS Ø 0.25 mm, length 16 m, keeping the tension even in a strong wind. In addition to these figures, it is easy to perform and all sorts of eight (with a gross weight up to 600 g).
BASIC DATA
take-off weight, g………………..540
bearing area, DM2 ……21,7
specific load, g/DM2…..25
V. KIBETS