In recent years, modelers have increasingly used in their designs packing foam. This material is lightweight, sufficiently durable, uniform and well handled by termoindurente — Izanami of glow current to the nichrome wire. With proper use this is a very common material (usually together with veneer) model based on it turns out no worse and sometimes better balsa.
We offer to your attention a Styrofoam model of air combat, developed by our reader, an aeromodeller from the city Ustinov Andrey Syryatovym.
The design of the model worked out the entrance of a series of experiments and the construction of a number of experienced “bizovac”. Despite the apparent simplicity — a rectangular wing made at the short beam of the Elevator — there is a great aerobatic performance. Play it almost every Antonov an — scarce materials in the construction there. All items of foam core, basswood, pine, and plywood. The forehead and the wing ribs cut from the packing foam, rails and pine slats by the cross section of 3X5 mm, trailing edge of the same material cross-section 3X9 mm. Front edge as a force element is missing, just the foam forehead glued one layer of furnace paper on glue BF-2 or BF-6. 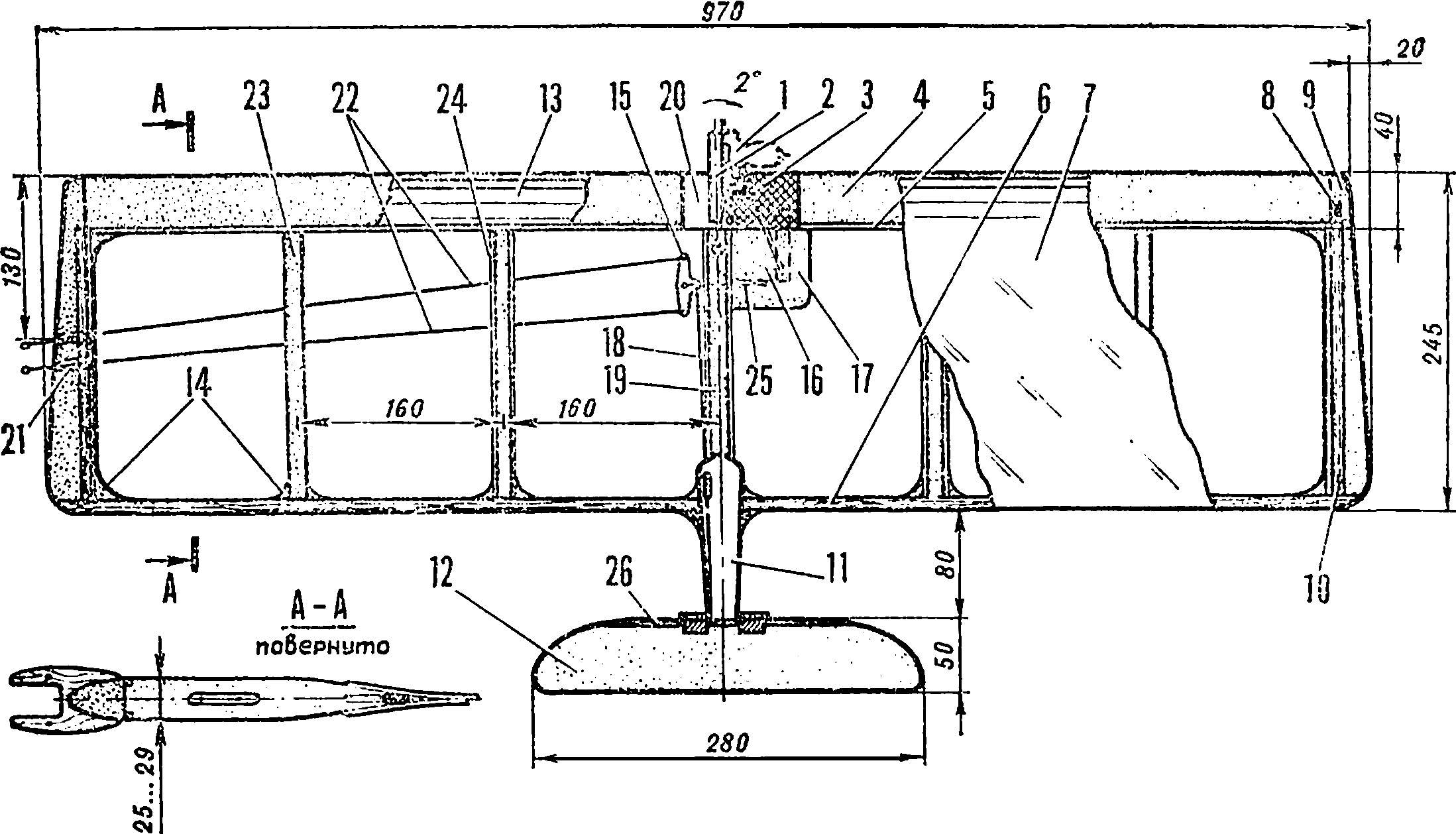 Design model of air combat:
1 — motor, 2 — motor, 3 — glass cloth reinforcement in the forehead of the wing, 4 — wing forehead, 5 — spar, 6 — rear edge of the wing, 7 — wing skin (Mylar film), 8 — a load (lead, mass of 25 g), 9 — rib-ending (foam stamps PVC), 10 — strengthening the ending 11 — the rear beam, 12 — Elevator 13 — the skin of the forehead, 14 — reinforcement of the gusset plate, 15 — rocking control 16 — fuel tank (tinplate thickness 0.3 mm), 17 — container fuel tank, 18 — pull Elevator control, 19 — Central rib, 20 — edging the forehead, the 21 — tube (copper, Ø 3X0,5 mm), 22 — control cables, a 23 — rib, 24 — trim rib, 25 — clip (wire OVS Ø 3 mm), 26 — the leading edge of the Elevator.
The thickness of the ribs 9 mm. Only the Central more massive than 15 mm, two sides she and two neighbors to her pasted a phony veneer of a thickness of about 1 mm on the PVA glue. The Central rib is preferable to make a more rigid foam, for example PS-1. To facilitate harvesting of the ribs should not be.
The end ribs are given a phony veneer thickness of 0.8 mm and a width of 12 mm. Without such edging to fit a model of the Mylar film will be difficult.
To give the frame greater rigidity of the wing, each of the ribs it is necessary to reinforce the gusset foam stamps PS-1.
To the Central rib top and bottom are glued flush with epoxy fake plate. In the previously selected rib, the groove depth of 1 mm. the Ends of the plates are reduced to nothing, and in between is glued to the foam stamps and PVC wire (OBC) the axis of the rudder with a length of 50 mm.
The Elevator — foam (R-1), top it with two coats of glue BF-2. The leading edge of the rudder — lime rail section 4X4 mm. To the axis of the Elevator is attached to a nylon tape (in two layers).
Rocking control — duralumin (D16T), with a thickness of 2 mm. the Cables connecting it to kordovye threads retinue of two steel wires of 0.3 mm thickness. Traction between the rocker and the wheel height of steel Bicycle spokes. The rocking chair is fixed on the fuel tank — it is made of wire Ø 3 mm curved U-shaped bracket, which is then soldered to the tank.

The design of the tail model of air combat.

Diagram of the Elevator drive.

Install the control arms of the fuel tank.
Fuel tank with tin, the design is traditional for models of this class, it is soldered filling, drainage and feeding tube. The tank is glued on the epoxy into the wing, which in the forehead under it is cut a groove. Container under the tank — also the foam better brand PVC. It consists of two glued parts, top and bottom. The finished container fits tightly on the tank, and the entire Assembly epoxy bonded to the Central rib and the spars.
Manufacturing motor take carefully — it’s the main power node in the model that are experiencing significant in-flight load — and static, and vibration. It is best to cut it from 8 mm plywood: with one hand she glued plywood with a thickness of 1 mm; and on the other, where there will be foot engine, it is glued beech lining thickness of 2 mm and a width of 8 mm.
In the forehead of the wing under the engine is cut. To wing sock does not lose strength, this area is glued by one layer of fiberglass cloth on the epoxy binder.
The inner side of the motor the forehead of the wing is enhanced by the lime plate thickness 0.9 mm is needed to be stitched Mylar film.
Assembly of the model is conducted on a level Board or particle Board-a building berth. The finished frame should not have a bias or twist. When the wrapping film first circle around the forehead of the wing and secured on the trailing edge and end ribs. Strongly recommend to glue the Dacron to the ribs and directly to the forehead — they will not withstand the elevated temperature necessary for fixing the film.
The model showed excellent flight and handling qualities. the operation of its engine KMD-2,5, converted to glow. The diameter of the diffuser of the carburettor was increased to 4.5 mm With screws Ø 160 mm and 100 mm, the engine develops up to 22 thousand rpm When modifying the engine you can use the recommendations contained in the book of P. Kiselyov “Model of air combat” (Moscow, publishing house of DOSAAF, 1981). Good flying model and serial KMD-2.5 or with motor CSTOM is 2.5.
SARATOV A., Ustinov