In our journal No. 10, 1985 was first told about the devices of a new class of FSR-N and the rules of the competition. Judging by reader’s mail article attracted the attention of many modelers — they opened alluring prospects of design search in the not yet clamped by the technical requirements of the class. And now, when for the first “sighting” of the competition, we can safely predict: the adherents of a new kind of ship modelling will be many. According to authoritative experts, the class FSR-N promises to be one of the most popular in a large family of motor RC.

To help athletes seriously fascinated by the creation of a “non-standard” models, we publish today a description of microscooter with the engine a working volume of 3.5 cm3. A new variant of high-speed RC ship once again confirms the view of the variety of circuit solutions in the class recognized and the Federation of ship modeling sport of the USSR.
The attractiveness of the design is not only that it is available for copying. Important and its easy materials to build. The ship consists exclusively of the plywood parts, which allows us to recommend microscooter a wide range of athletes.
First of all a few words about the history of RC microscooter.
A couple of years ago the author proposed the development of the master of sports of Czechoslovakia V. Dvorak received a copy of the drawings scooter-9. By design, some simplification of the Czechoslovak athletic built model a engine working volume of 6.5 cm3. Not relying at first on the highest speed, Dvorak departed from the requirements of copy number and did not establish the aerodynamic stabilizers. The first start went well. But when the propeller “Graupner 45KH” was replaced by a more suitable improvised lobed, the speed of the model increased when the course against the wind she had a tendency to lift the nose for takeoff. Had to retrofit a scooter with stabilizers.
By purchasing this RC some experience, Dvorak got a new one, designed for the MVVS motor is 3.5. Taking into account the error in the resistance of the first sample, the athlete changed the shape of the forward part of the model, which allowed to completely abandon the stabilizing surfaces without deterioration of running properties and stability of the glider. 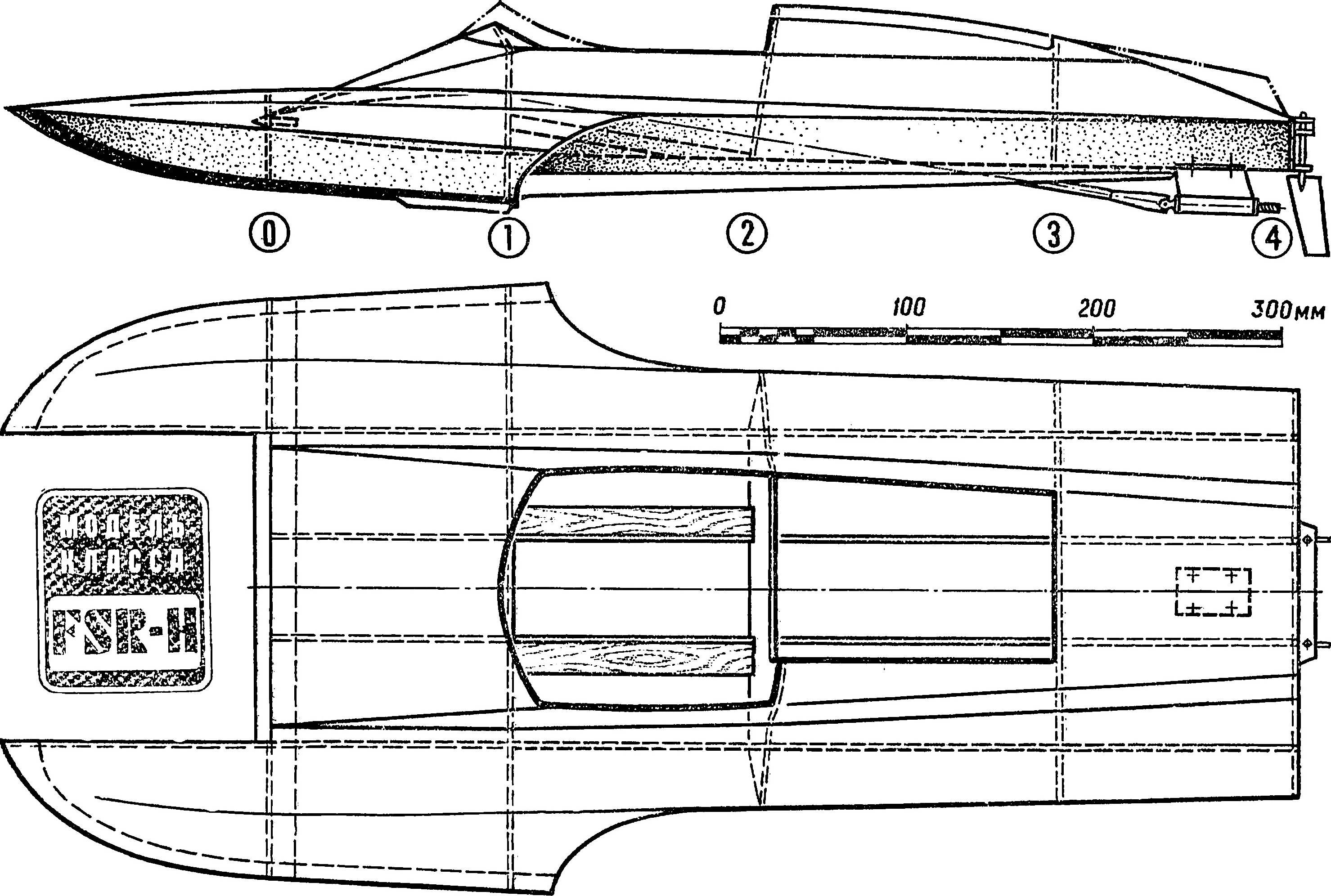 RC speed model scooters with an engine displacement of 3.5 cm3 class FSR-H 3.5 mm. Below shows the pattern side of the inner wall of the float.

The frames of the hull and floats. The numbering of the frames match the drawing model of the scooter. The dotted line on the bulkhead No. 1 shows the place of attaching a front edge sloping plating side of the main body. A dotted line frame No. 2 shows the detachable part belonging to the cover of the radio.
The construction of such a model is simple. Primarily made of plywood with a thickness of 2 mm cut out the inner walls of the floats and frames No. 1, 2 and 4. The rest of the frames of the floats and the main hull is plywood with a thickness of 1.5 mm. After Stripping the finished items together, control their relative position and shed the seams with epoxy. Then mounted beech bars hanging motor, made of duralumin sheet thickness of about 5 mm. the hinge consists of a set of rubber washers, greatly reducing the transfer of vibrations from the power plant to the body. “Sandwich” in the middle of which is clamped by each of the three legs of the motor plate, is attracted to beech the bars with M4 screws.
After that, the grooves are stuck with frames cut out of plywood with a thickness of 2 mm of the edge of the floats and installed a set of longitudinal body rails of the corresponding section. Waiting for the curing resin, set vyskazyvat and sheathe plywood thickness 1.2—1.5 mm. the Sequence of overlay panels: the bottom of the main body, the housing Board, the sides of the floats, and finally the bottoms of the floats. Finish “tub” cover the inside with epoxy varnish.
Before gluing the upper part of the model thin plywood needs to be installed in a housing of a stern tube with propeller shaft and fuel tank capacity of 170-200 cm3. Tank is located front of engine, close behind the bulkhead No. 1. In its design it is necessary to consider that the model is moving in an oval trajectory, but the direction of the stroke of the clock. In the rear of the hull is sealed with a beech block mounting of the rudder stock. Then in several places the volume of the shell filled with foam, which prevents resonant vibrations of a thin plating, and finish plating. Vyskubenko over the surface of the body covered with a thin fiberglass average thickness. 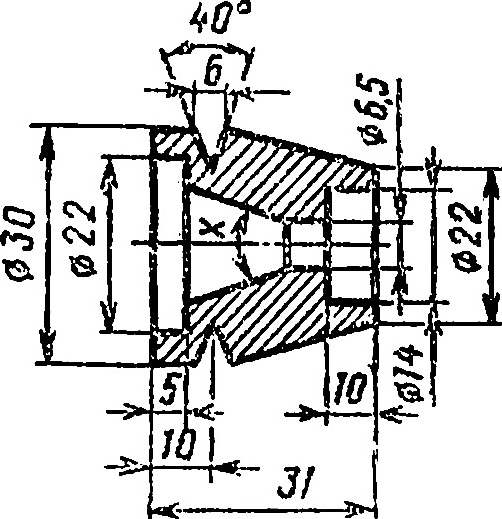 Engine flywheel (brass, bronze). The size of the “x” to perform regular split of a landing cone of the engine.
In the proposed model control equipment, the gas engine and rudders were placed in the compartment between frames No. 2 and 3 from starboard. Cover should ensure its sealing.
Polished finished model was painted with epoxy enamel. Perhaps the use of other coatings, resistant to water and to the effects of fuel components. After finishing and assembling the scooter carefully centered. The center of gravity should be between flywheel of engine and frame No. 2.
Although the launches of new high-speed it is not necessary to “grind” to the water, as the well-known models class FSR-H for the launch of this scooter is rather peculiar. After setting the scooter with water running on half the power of the motor it is given to accelerate. This happens very quickly, and the model clearly comes to gliding on floats and the back of the deadwood. In this case the propeller is unloaded, as it goes to a pronounced semi-submersible mode. Already at that speed, the scooter is stable and can be added to the gas engine, and then trying to control but course. It should be noted that in contrast to the devices of class F1 scooter is very responsive to steering wheels and under acceleration. If it is considered a disadvantage, unwanted effects by changing the shape of rudders.
The proposed design leaves the possibility of further testing scheme. Suffice it to mention the selection of parameters of the propeller to increase the speed of the machine, the design of the aeration system rear planing surfaces of the floats.
The basic data model
Length, mm: 720
Width, mm: 320
Weight, kg: 2,10
The settings in the debug of the propeller (diametre, mm): 40X56
When prerecruit engine download it first increase the pitch of the propeller, then by increasing the diameter.
According to the magazine “Modelar”, Czechoslovakia
From the editor. Athletes who built a radio-controlled scooter the proposed design and made improvements to it, please inform us about the results of the modifications in writing with the Appendix drawings.