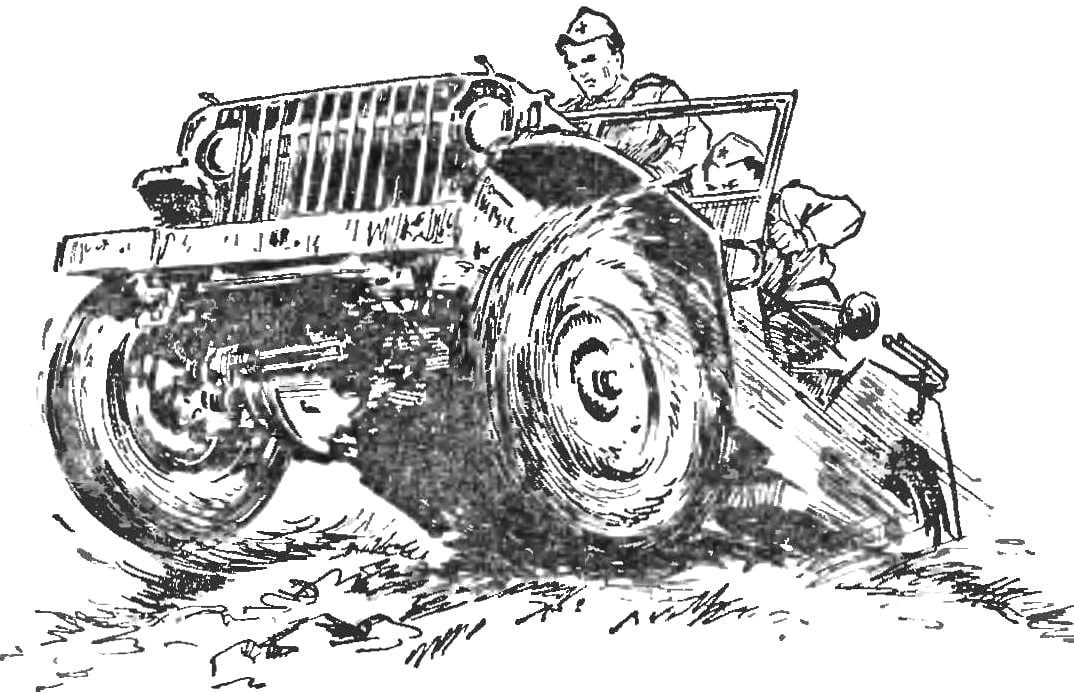 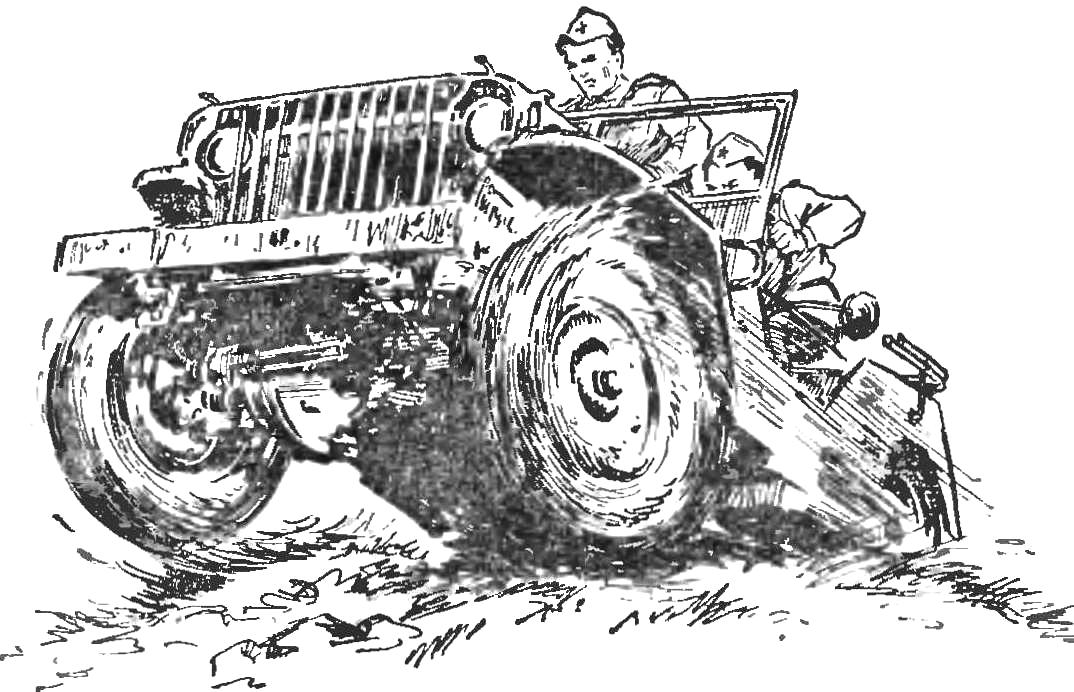 These small, agile machines can hardly meet now on the road. Except in remote areas, they survived as a Museum piece. And in the years of the great Patriotic war, these cars picked up shells on the front line towed gun or used as a staff. The American “jeep” supplied to the USSR in the last war, has become a symbol of military cooperation between our peoples in the struggle against fascism.

Radio-controlled model car “jeep” was built in the laboratory of the Moscow city sports technical motor club DOSAAF and for several years successfully launched at competitions of a various rank, including at Union. On the model installed denotationally equipment “Variofan”. It should be noted that there are only four channels. If necessary, can be used and other equipment, homemade or serial. The control of the front wheels is performed with the steering machine, the included “Variophone”, chassis, motor brand, PDM-30-H3-01 domestic production.
Easy to form, simple manufacture technology and application of available materials allow us to recommend a model for beginners. However, the complication the design of the chassis and a more complete saturation of the model parts, which are awarded incentive points, the model may be of interest and modelers with the experience.
The body model is made of tinplate, 0.6 mm thick. cut the Individual blanks, after the Stripping edges vykruchivatsya on the disc (in complex configuration) and soldered butt joints with soft solder. Because the body does not have a large free surface, any additional details to improve its stiffness (scarves, ribs, etc.) are not needed. 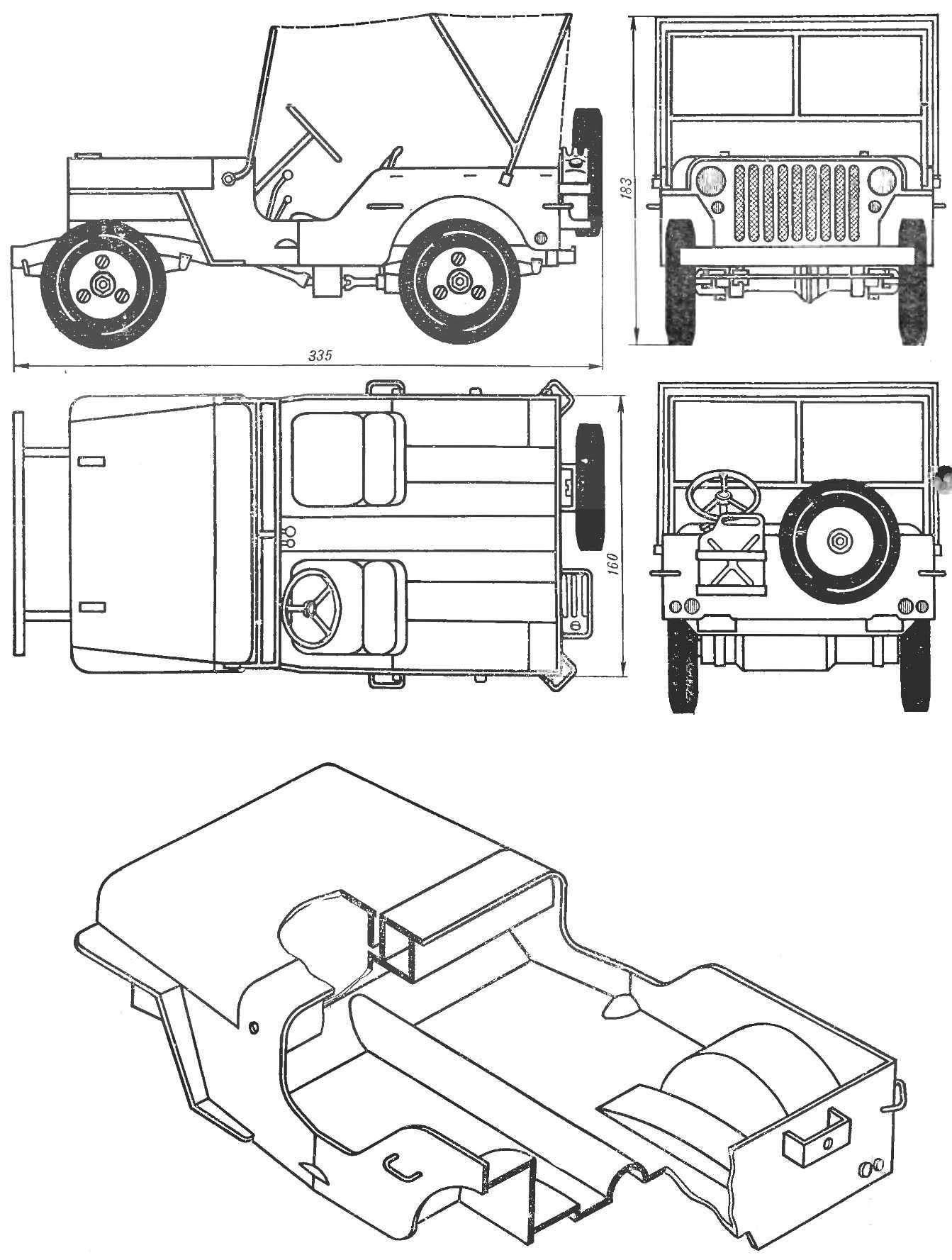 The only opening part — the hood is suspended on two hinges and is fixed on-the-go model is the simplest latch. The eight cutouts in the front of the body closed inside a brass grid with cells approximately 1,5X1,5 mm, simulating a radiator grill.
In round holes for the headlights fixed conical tubes made of tin with installed bulb from a pocket lantern. Bottom of each tube attached medical microlance, illuminating the headlights. All connections electroarmature illumination produced by the soldering. In the hole on the outside of the headlights shall be pasted with glue BF-2 the scattering of glass, made of plexiglass with a thickness of 1,5—2 mm. given convex shape, and the inside caused the vertical corrugation. The front flush with the front panel covered with the transparent Plexiglas of thickness 0.5 mm with the same corrugation.
Brake lights, turns lights and reflectors (warning signal without illumination) and extruded from a sheet of brass or copper of a thickness 0.3—0.5 mm. Imitation glass is made by red plexiglass. Illumination of the brake lights and turn lights are made by medical microemboli.
Large brackets on the back made of brass wire Ø 2 mm, arc for fastening of the awning Ø 1 mm wire Ø 2 mm soldered and the hinged frame of the windshield. It is inserted a transparent plexiglass with a thickness of 1 mm.
Frame spar shaped. The side walls are made of duralumin cross section 4X6 mm. Front and rear bumpers, U-shaped cross section are attached to the spars countersunk screws. 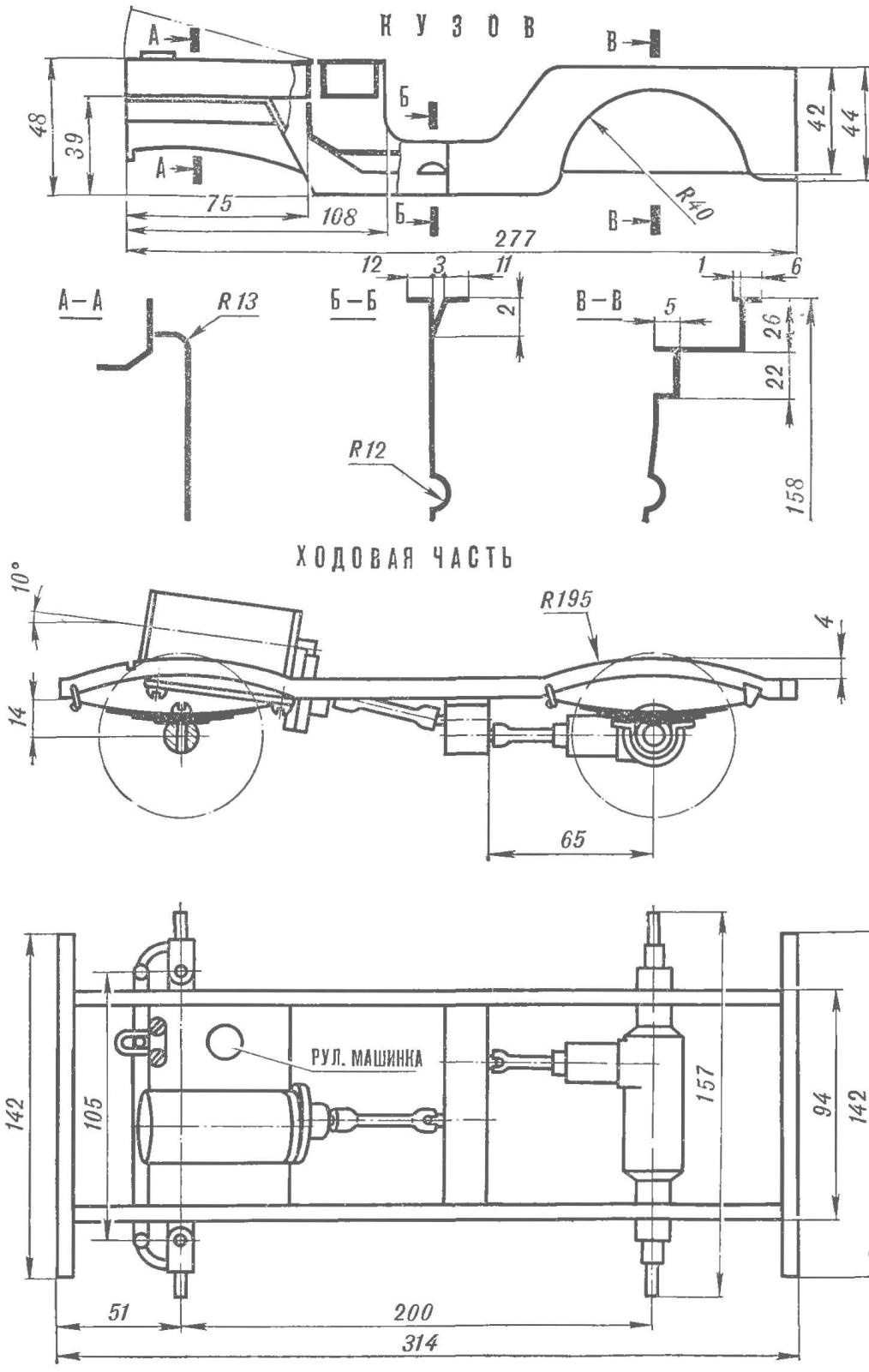 At the front of the frame with four screws fixed brass panel, on which the running gear motor and servo. Leash the steering machine is connected to the finger traction on the transverse steering linkage, to ensure synchronicity of rotation of the front wheels.
In the middle part of the frame located on the traverse gear box through which drive shafts are connected to the chassis engine and axle. Gear ratio box — 1 : 1,5. In the rear axle, in addition to the reducer with a ratio of 1 : 2, a differential facilitating movement of the model and its control on the turns.
Pendant is made for typesetting leaf springs made from strips of spring steel with a thickness of 0.4 mm. Strip tie fastened with staples, two on each spring. Springs attached to the axles with screws to the front — one cross-cutting through the middle, and to the rear two, with the help of a clamp. Front during the ends of the springs are connected with the frame of the earrings, and back — across the cheeks, riveted to frame, copper rivets.
The wheels have a homemade hollow tire with a large cross-sectional tread. Tires are mounted between the disks, pulled together by three screws. The discs turned, dural. The front wheels are free to rotate on ball bearings. Fixed on the rear axle nut.
The area includes the controls and the seat. It all soldered from brass wire and foil. Seat frames upholstered with leatherette of black color. 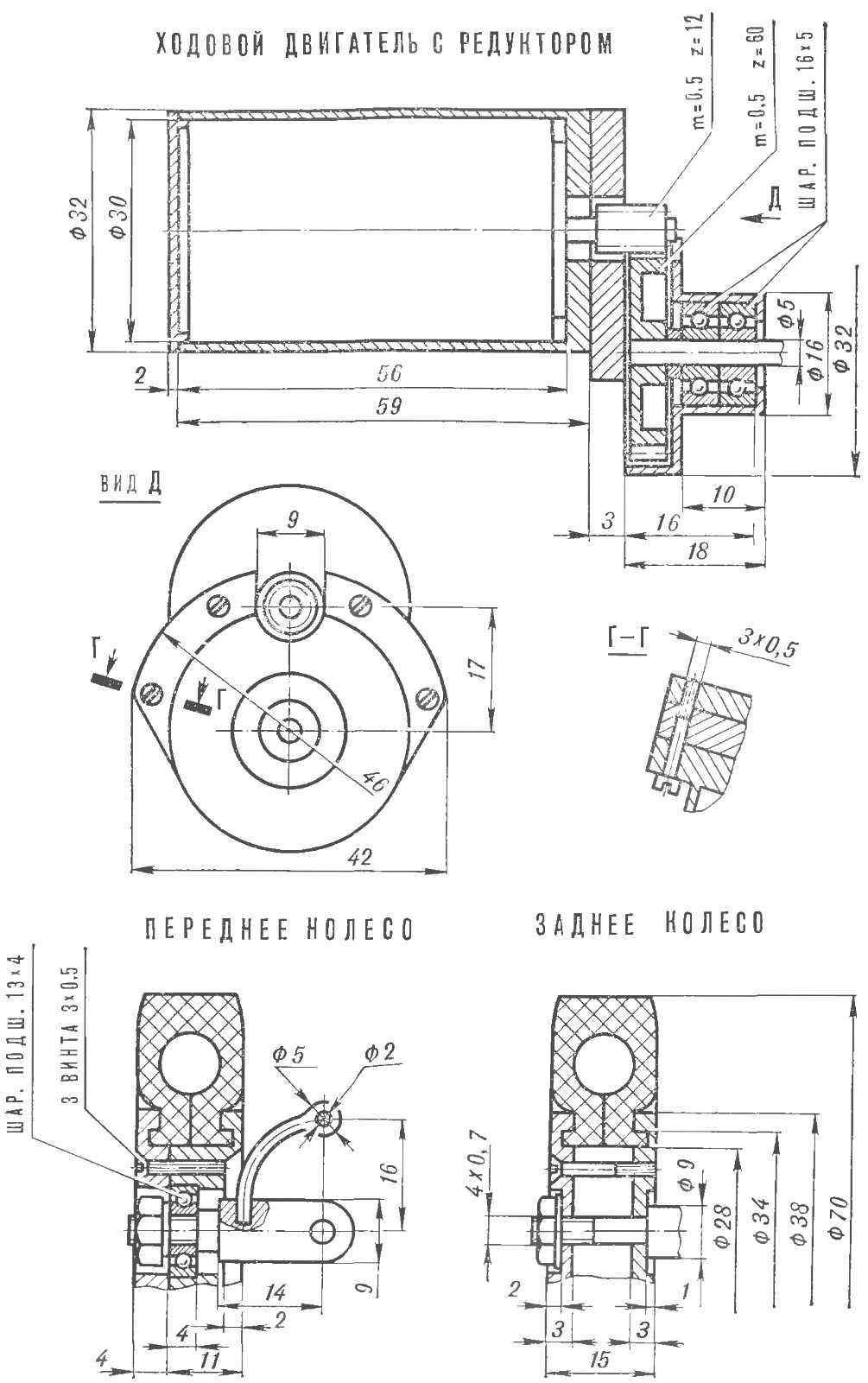 Radio is closed by a model of a wooden container. On other models of “jeep” this can be a imitation of any other cargo. The awning is sewn from a thin canvas of green.
The painting is done nitroenamels protective (green) of the colors previously applied layer microgrant, and finally the surface is treated with polishing paste. Wheels and frame — black
At the technical inspection model is gaining 45-50 points, including the presence of nodes of the copied car — 1V points (including only five positions of the light out of six possible). However, a more detailed copy of the car “the jeep” allows you to bring your total number of points obtained on inspection, to B0—B5. This can be done by making the front axle to the drive wheels, differential and shaft drive to it from the transfer box, the gearbox, an electric sound signal, the wiper mechanical drive. 10 additional points can be obtained for the replacement of an electric driving engine of the internal combustion engine.
R. OGARKOV, V. BIOLOGICAL