Beginners only pilots first, as a rule, “fly” for simple models, is designed for small “cubic capacity” of the engine. They learn to manage to work out a complex aerobatic figures. Over time, performance of simple models no longer satisfy them. There is a desire to build a more serious and heavier the aircraft under the engine more “cubing”. And this is not surprising because in such a model, the flight characteristics much better.

Presented cord pilotage (CL. Р2В) — a sample of how would the transition between simple (small mass under ice-2,5 cm3) and complex (large mass, modular design, fiberglass, engine to 10 cm3). The proposed model is not so complicated but requires a certain experience in the construction and piloting. Its production takes three to six months, depending on the experience of the athlete.
Building the model I recommend to start with the wing. In plan, this trapezoidal shape, symmetrical profile. Ribs — balsa, with a thickness of 2.3 mm, with cut-outs to facilitate and balsa reinforcements in the form of two transverse slats cross-section 2,3×2,3 mm. Longitudinal — grained pine cross-section at the root 7×5 and 7×3 mm at the end. Until the middle of the wing panels (five bays between the ribs, counting from the body) and glued the spar web with Windows of relief. The forehead of the wing balsa plates (pre-soaked in hot water and bent on the mandrel), the lining of the wing, the trailing edge and lining of the ribs have a thickness of 2 mm. the trailing edge of the and its lining to form a U-shaped profile. The law-cavka inner wing (facing the athlete) light weight, and no, she’s also in the zone of junction of the spar loaded twenty grams of lead.
Plating of bearing surfaces — Mylar film with thickness of 0.03—0.04 mm. Console cover two or three times with liquid glue BF-2 and after drying, applied the tape the painted side out. Unsewn portions of the forehead and tip trim the fiberglass with a thickness of 0.02 mm on a parquet varnish, and the joints and other flaws with putty and sanded.
The flaps and stabilizer of the symmetric profile and the keel PLANO-convex. Their design is stacked (thickness of the ribs is 1.5 mm), they covered the balsa with veneer thickness of 1.2 mm and a banded fake veneer thickness of 1 mm. Surfaces are covered with fiberglass of a thickness of 0.02 mm on a parquet varnish.
The fuselage is one of the most labor-intensive elements of the design. It is very important that it was collected without the slightest bias. I advise you to start its production with mustache engine mounts. It is made from beech or hornbeam. Choose straight grained wood, free from knots and ROE. The bars transfer the drawing of motor and process with an accuracy of 0.1 mm. the Span of the front bulkhead to the end of the whiskers easier, making the chisel the sample in the form of a groove in the side surface. After fabrication and verification of items received with the drawing mark and drill holes with a diameter of 4.2 mm for fastening of the engine. They glued the mounting fungi (threaded bushings with shoulders) of the same outer diameter with inner thread M3 and a height of 10 mm. 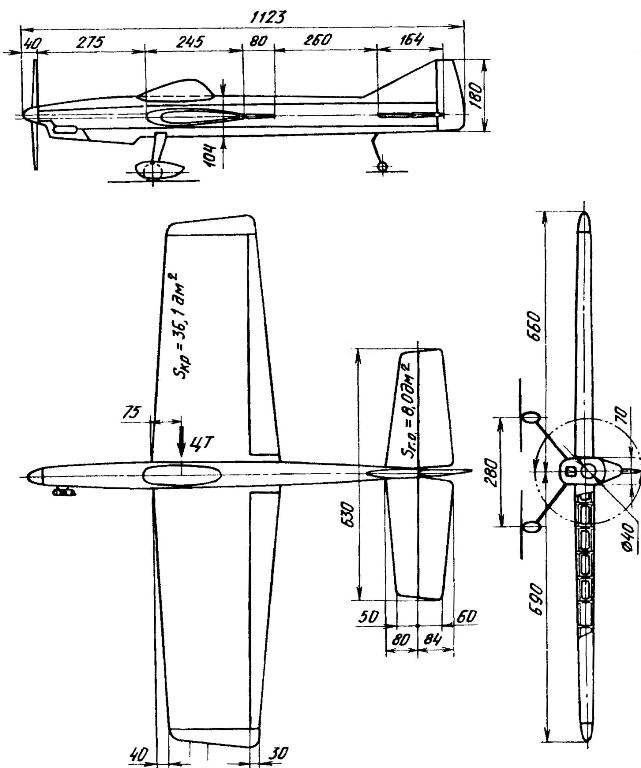 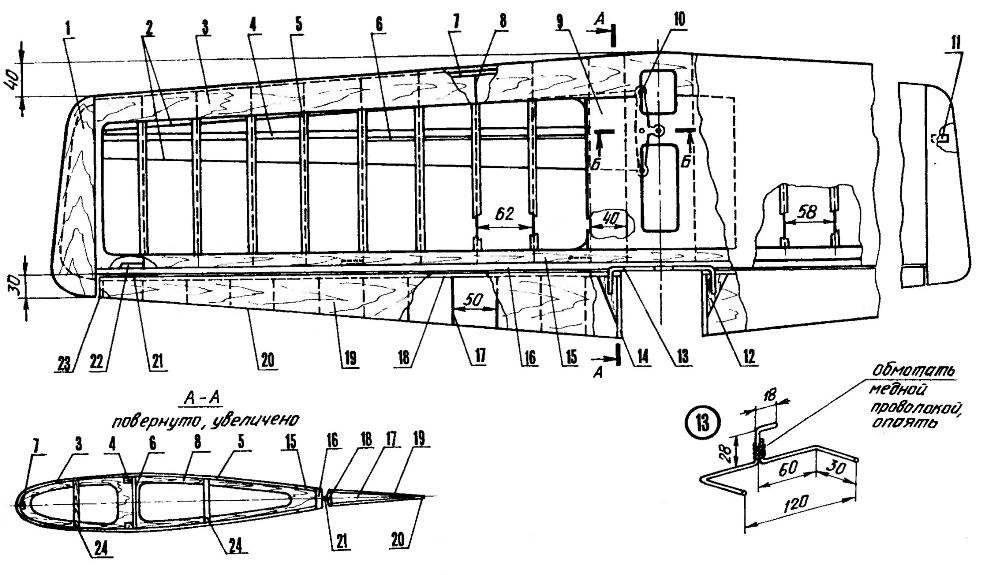 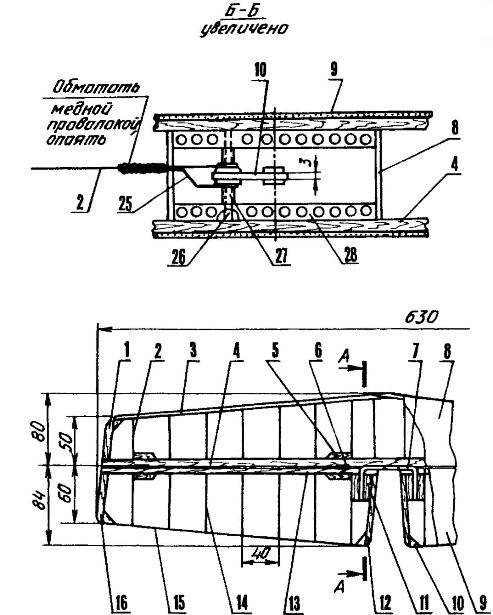 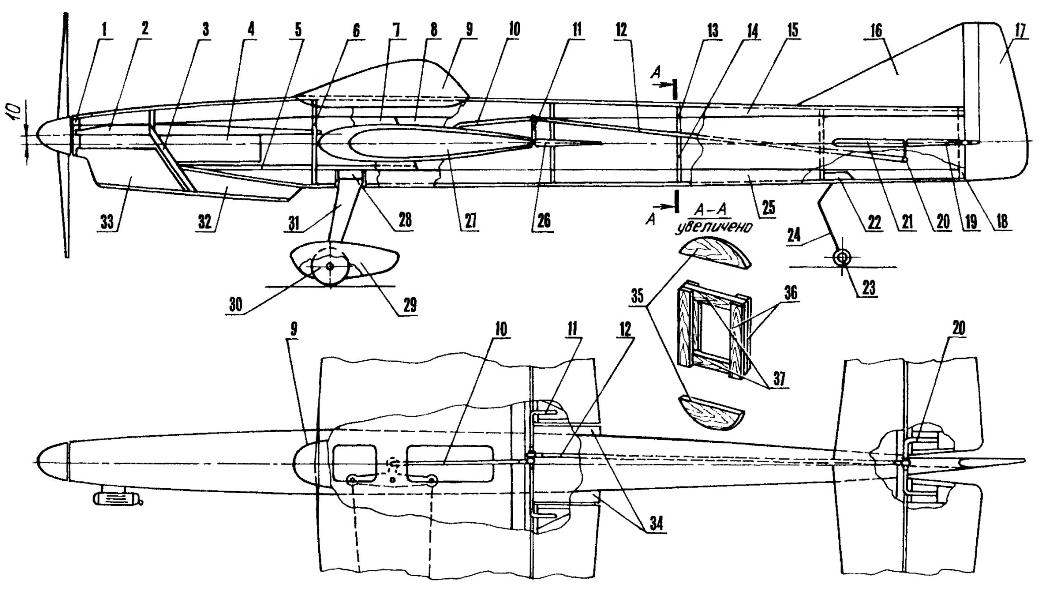 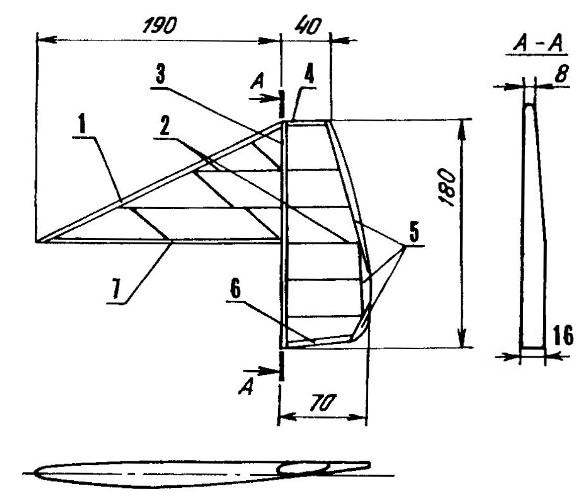 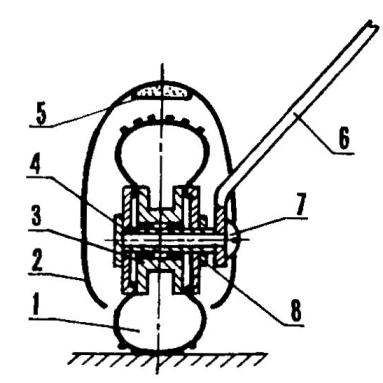