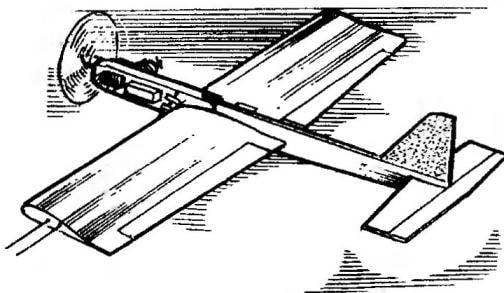 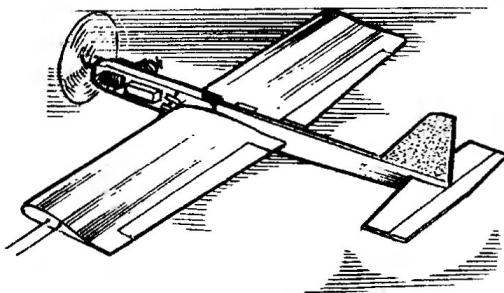 In aircraft modeling group of the Moscow city Palace of creativity of children and youth members with a passion to build kordovye aerobatic model aircraft class F2В. Participating in competitions on aviamodelling sports, they repeatedly occupied prize-winning places. Offer one of their models. It is interesting because it has some design differences from the previously constructed pilotage. First, the profile of the wing she’s got a teardrop shape, and second, the spar passes inside the profile.
In addition, the model is made of nedifinita materials, such as pine, Linden or aspen.
The build started with the forward fuselage. Its thickness is 9 mm. it has cut-outs under the engine, wing and fuel tank. Both sides of the nose portion is reinforced with plywood plates having a thickness of 3 mm, a bit for setting the front edge of the wing. In order to avoid distortions, this work was carried out consistently. Was first glued one strip, and when the glue has dried, the bow as a template, carefully made cutouts. Then did the exact same thing with the second pad.
The aft fuselage consists of two pine or Linden slats. Their section at the beginning of 9×6 mm, and 6×6 mm. the end of the Top rail runs the entire length of the fuselage. Lower a bit shorter and starts at the cutout under the fuel tank. Both rails glued to the bow. The fuselage tail ends with a boss from pine wood (Linden) with a slot width of 3.5 mm under the stabilizer. In the space between the nose and the tail boss glued bracing section 7×3 mm.
All parts are mounted on the epoxy EAF.
After Assembly of the fuselage and drying of the resin at the end of the top rail on top of the slotted groove depth of 4 mm for the vertical stabilizer. And the beginning of the groove is offset 2 mm to the left from the centerline of the fuselage, and its end is 2 mm to the right. This is done to ensure that the model did not fly in a circle and secure the tension cords. 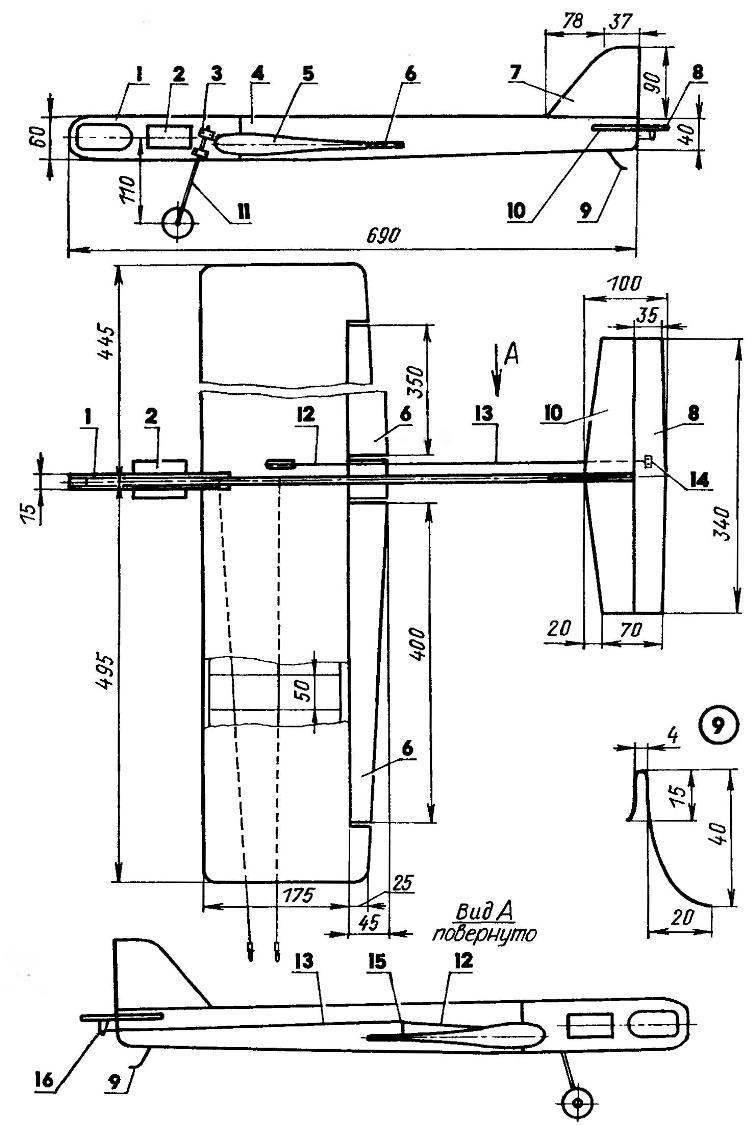 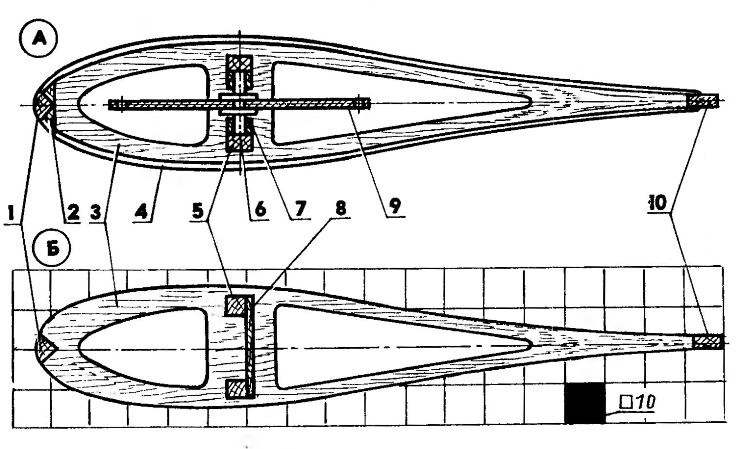 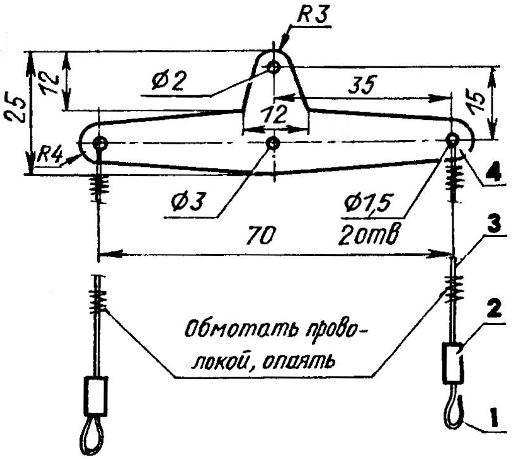 Rocking with wires:
1 — carabiner (wire OVS d1); 2 — clamp (copper or brass tube d3, sleeve); 3 — wire (three-four-core cord d0,3); 4 — rocking chair (aluminum s2).
The next stage is the manufacture of the wing. His profile has a teardrop shape. After preparing the templates sliced 19 plates under the ribs out of plywood with a thickness of 1.5 mm (Linden or aspen, then their thickness is 2 mm). Plates were collected in one batch and processed along the contour. After that, the pack made the cuts at the front edge of beam flange, and a slotted window for ease of construction.
The front edge of the pine rail cross-section of 5×5 mm and the top and bottom beam flange — rails section 5×4 mm, between which the insert wall from plywood (basswood) with a thickness of 1.5 mm. trailing edge of a pine rail cross-section 10×3 mm. it made cuts to a depth of 3 mm under the tails of the ribs. The wing is assembled using epoxy EAF on the stocks, which served as a well-planed Board.
The wing tips are made of PVC foam stamps. In the internal ending glued two copper tubes of an external diameter of 3 mm cables under control back chair. In the external ending in the area between the front edge of the wing spar and glued a weight of 20-25 g for compensation of the centrifugal force.
Flaps and bottom insert plates are made of pine (lime) with the thickness of 3 mm. Between the center ribs to the upper and lower shelves of the spar with epoxy glued two beech bar along with a rocking chair and cable management. After this, the Central section was sewn top and bottom with plywood 1.5 mm thick (fake plates, then their thickness is 2 mm), and with the fiber direction along the wing span. In the upper casing slotted window under the output rods extending to the pylon flap control.
Stabilizer and Elevator sawn pine with a thickness of 3.5 mm. the Profile of the horizontal tail symmetric. On the Elevator with rivets with a diameter of 2 mm is installed pylon. Then the Elevator is attached to the stabilizer — “sewn” loops in the form of eight from the fishing line diameter of 0.3 mm., the keel is made of plywood with thickness of 1.5 mm and in such a way that its outer layers of wood were placed vertically. 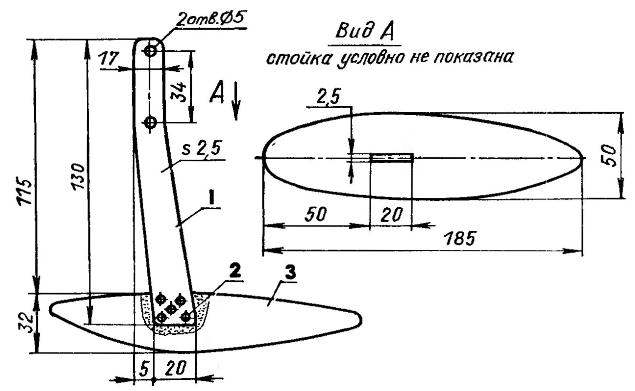 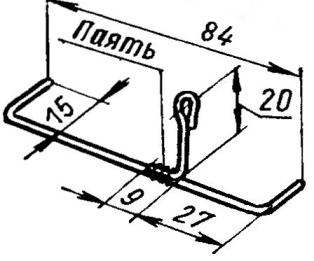 Rocker with a horn flap control. 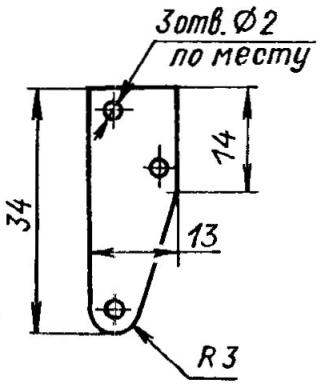 Pattern wild boar elevators.
The control system model consists of rocking the ropes with carabiners and clamps, a pig with a yoke to control the flaps, rudder horn and a connecting rod between them. Rocking sawn of duralumin sheet thickness of 2 mm. Her shoulders 70 and 15 mm. Ropes made of three or four lived cord with a diameter of 0.3 mm twisted together. To them soldered carbines from wire with a diameter of 1 mm for coupling with Konami going to the handle control of the aircraft. Horn control flap has a bend from a wire OVS with a diameter of 2 mm and soldered to the yoke of the synchronous control flaps. Pylon rudder cut from dural area of 17×17 mm.
The fuel tank soldered tinplate of 0.3 mm thickness. It is made according to the principle of ink sippy and resembles lying on the side of the house. The tank has three pipes: the supply connected to the motor a plastic tube, filling and drainage. A volume of 60 cm3.
The chassis may be of any design, e.g., single wire, allied with a diameter of 3 mm. we Have in the lab it is made in the form of skis for takeoff and landing with snow crust or ice. As the material of the skis used foam PS-40 coated with two layers of liquid and one layer of thick PVA glue. Every layer well dried.
The Assembly was carried out in such sequence. First, the fuselage was attached to the tail: the keel and stabilizer with Elevator. Then glued the frame of the wing (without the law-cowok and flaps). Inserted rocker control flaps, taped to it with wire and soldered the pig. When turned rocker (“whiskers” vertical) side of the fuselage was imposed by the Central insert and glued with epoxy to the trailing edge of the wing. To the wing flaps and applied in the appropriate places marked, and then drilled holes with a diameter of 2 and a depth of 17 mm under the mustache rocker. To enhance the flaps in the areas of drilling them on the top and bottom glued fairings made of pine with a thickness of 3 mm, having in the plan a teardrop shape. With loops of fishing line with a diameter of 0.3 mm the eight they are attached to the trailing edge of the wing. Place customized and glued end panels, and then ending.
Pull made of wire, allied with a diameter of 2 mm. But the second rod (from the pylon flap control horn to the rudder) so it was easier to adjust it in place, it is better to make a composite: the middle part of the round wooden rod with wire endings. One of them was immediately strapped windings impregnated with epoxy resin. The second is attached the same way, but after fitting.
Wing and aft fuselage covered with Mylar film with a thickness of 0.24 mm according to the known technology using glue BF-2 or “Time” and a hot iron, which provides reliable adhesion and the film tension. You can also use shrink wrap or mikulintsy paper. The window in the wing rod from rocking closed fairing of celluloid (polystyrene) with a thickness of 1 mm. With epoxy glued top Livny tank. The latter was installed chassis and engine.
The fuselage, stabilizer and fin are covered with nitrocellulose lacquer. If you wish for the beauty of the model can be painted with nitro and be sure to cover parquet lacquer for protection from corrosion by the fuel.
On the model, you can use the engine capacity of 2.5—3 cm3 with a propeller with a diameter of 220-240V and step to 120-130 mm. And the axis must be moved to the right to fend off the reaction of the screw. To do this, under the front “foot” of the engine is enclosed by a nut M3. The engine mount first, without air screw, then check the alignment model, which should be within 20-25% of MAR from the leading edge of the wing. Do this by moving along the fuselage crutch, made of wire, allied with a diameter of 1.5—2 mm and pre-attached elastic. When the center of gravity determined in the fuselage drill hole, which finally attach to a crutch.
The model is ready! It would be better if the first test flights will make an experienced Modeler or group leader.
Sergei MIRONOV, head of the aircraft modeling group MGTD and th