Chopper roots, so necessary to provide domestic animals with vitamins (“rezanci”), I have constructed on the basis of АТД2 charged — device Tu-Kovacevica disk, which managed to find among a collective of scrap metal. And coming here and metal silo of cylindrical shape with cover and lower belt, and he is working on seeding (simply put, a plate).
The belt I cut from the base of the structure. It had to cut the scale with the lever and scraper (scale was welded) at one process window needed to set the plug, while the other, with dimensions 100×30 mm, remain unchanged.
Now on the plate (bottom of hopper). I removed the agitator and gear. In a steel disc and made a rectangular cutout for the exhaust pipe and brought the center hole size, 2 mm greater than the diameter of the output shaft of the motor.
As shown, the engine is best to use a three-phase (1.1 kW, 1450 rpm) with flange connection — it easier to attach to the plate. But quite acceptable single-phase household electric capacity of not less than 0.9 kW, able to develop the same momentum. 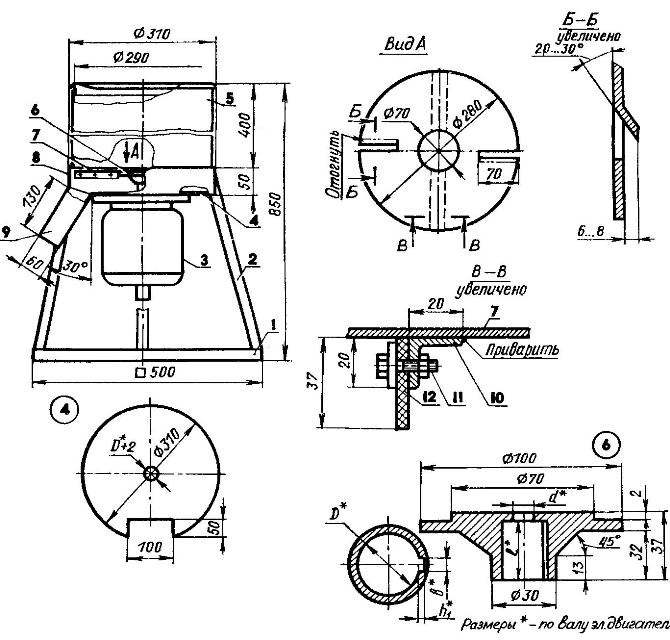 The shredder feed on the basis of a decommissioned fertilizer apparatus АТД2:
1 — frame base (area 35×35); 2 — (area 35×35,4 pieces); 3 — motor (fasteners not shown); 4 — plate; 5 — hopper with cover; 6 — a nave; 7 — knife shears; 8 — belt; 9 — pipe exhaust; 10 — brush holder (2 PCs); 11 —bolt M8 with nut and washer (6 sets); 12 — rubber brush (2 PCs.)
When you connect the selected motor with a plate can not, of course, to prevent the fastening elements played into the cavity of the hopper. It is better to use screws with countersunk head slotted screwdriver. But it can be justified and welding.
For example, I “picked up” by electric welding motor flange via threaded holes to the plate, after which the latter have been welded to the belt. Then cut on the bunker set and at an angle of 30° to the vertical wail outlet which during operation directs a vitamin chopper “chaff” into the receiving bucket. With four sides to the belt of the hopper welded uprights, resting on a square frame base steel area 35×35 mm.
As a starting point for such an important site as a knife, pruner used from the disc opener grain drill(without a hub), after reducing its outer diameter up to 280 mm below the installation in the bunker between the knife and the belt was 10 mm working gap. The diameter of the knife I cut with the abrasive cutoff wheel with the subsequent processing of the edges. The same instrument was executed and two narrow radial slot formed limb of a pair of blades.
Knife blades-shears drew from the cover of the bunker. The sharpening angle is 20-30°. And “propeller” shape of the knife is not changing under the pressure of the crushed mass and blade were killing me, and subsequently reinforced them privaris at the edge of the disk two steel gusset plate (not shown).
Ready “resinco”, or chaff raked to the water outlet two brushes on the canvas rotating blade. Both are made of a rubberized strap. For fixing serve segments of the steel area 20×20 mm, welded to the disk at the bottom and bolts M8 nuts and washers. The knife-pruner fixed on the motor shaft with the help of makeshift hub and pins.
Wheel hub made on a lathe. Its height is such that the knife was below the level of the junction of the belt bunker. Keyway in the hub profesionala. In the absence of a milling machine it can grind needle files manually.
F. SULEIMANOV, the innovator, the Republic of Tatarstan