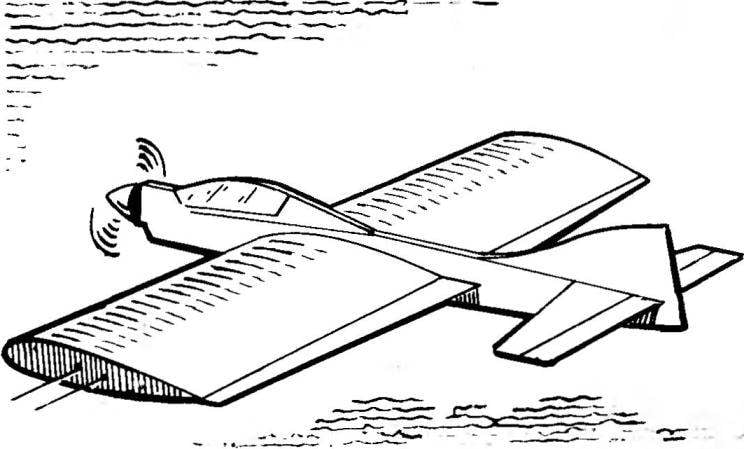 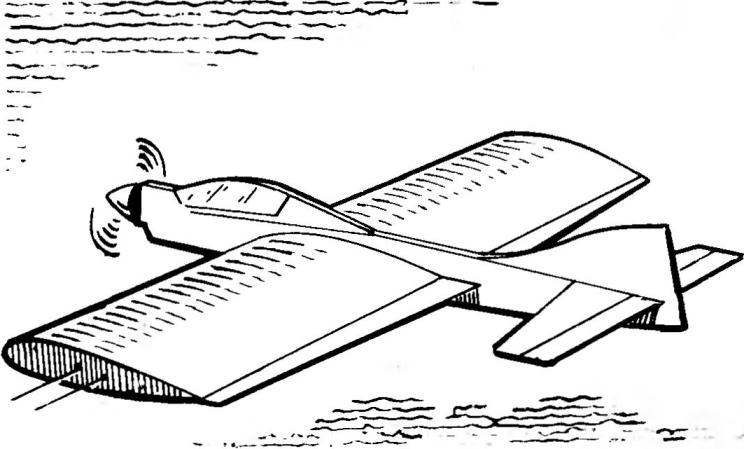 This cord pilotage has an excellent management system and has excellent maneuverability, which allows it to perform the most complex maneuvers. And most importantly – it never loses connection with the pilot due to robust tension cord at any point of the flight hemisphere. The design of this model is quite original and in many ways not consistent with accepted standards. In order to design such models, it is useful to get acquainted with the principles of determination of main parameters cord pilotage.

So, what does designing córdoba “acrobat”? First of all, select the total weight of the apparatus. The fact that this quantity determines the stability behavior of the model when performing maneuvers for continuity and connection of the control stick with rudder and flaps. Attempts to create ultra-light models with the developed load-bearing areas and correspondingly small specific loads were interesting, justified in terms of a super-maneuverable and vysokomanevrennyh of pilotage, but… led to the creation of the magnificent “calm” models. In gusty or even a light blue wind dramatically reduces the reliability of the control, and the situation did not save even the active pull-up handle with abrupt maneuvers or other critical situations. Returning to the proposed model, it can be argued that for specific loads 25…30 g/dm2 optimum weight is 650…800 grams with a good engine working volume of 2.5 cm3 (650…900 g for the motor volume of 3.5 cm3).
Do note that the reliability of the control signals is affected not only by the tension of the cords, but the magnitude of the swing control, especially for models with the developed area and the chord rudders and flaps.
It is therefore very difficult to create a “milokumova” pilotage weight of 400…450 g due to insufficient thrust power plant with the engine working volume of 1.5 cm3 (a good model of this type can only be considered a happy exception to the rule). However, if you increase the flight speed (in this case, however, decreases the thrust for maneuvers) and to shorten kordovye thread, the model is able to perform aerobatic complex shapes. Unfortunately, the result of such changes, completely contrary to the desire of the only pilots to reduce the angular velocity of the flight “acrobat”.
Selecting the basic parameters of mass and specific load bearing surface of the device, which is automatically obtained with the approximate total area of the wing and stabilizer. After that you can proceed to layout the drawing pilotage. An airfoil is desirable to choose a blunt, with increased relative thickness. This profiling will provide some “dulling” of flight characteristics, but more importantly, the model will not accelerate in a dive and on the individual phases of flight in a strong wind. 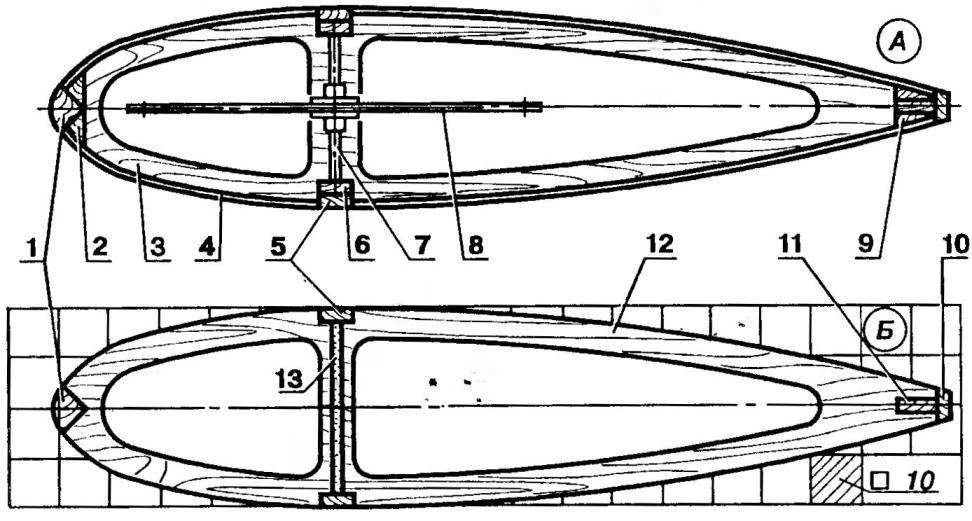 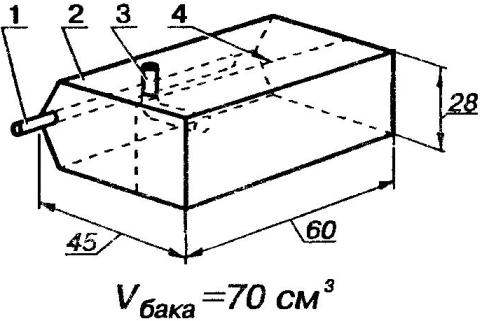 Fuel tank:
1 — supply pipe of the engine. 2 — body of the tank, 3 — tube filling and drainage (used for tank pressurization pressure tapped from the cavity of the silencer), 4 — the boundary of the gluing tank in the right compartment of the motor section of the fuselage.

Rocking control.
Typically, the axis of the engine, the chord of the wing and the stabilizer arranged in the same plane. In practice, however, the horizontal tail it is possible to raise or lower the half-height of the fuselage — the model a light subclass of it does not cause a noticeable asymmetry of the behavior of pilotage in normal and inverted flight.
Quite a controversial point is the choice of the LENGTH of the forward fuselage. Many athletes believe that a good flight performance are ensured even at large offsets of the engine. However, as a rule, debaters take off their arguments after the first acquaintance with the flight characteristics Korotkevich devices. The fact is that a large removal of the engine is so big the moment of inertia of the model during aerobatics has not only significantly pererubat to get a little bit decent corners for “square” and “triangular” shapes, but also put up General sluggishness and lag of response of the apparatus to signals from the control stick. In principle, the skilled athlete-piloting would be able to control such a device, however, piloting skills, when to give the handlebars in the opposite direction to stop the rotation, coming soon. Note that this experience is very harmful, because after the transition to the model of heavy subclass will still have to develop new skills. This usually occurs when training on well-designed light pilotage.
The proposed model, the length of the bow is in the accepted limits. Of course, there was the temptation to build a machine with super short nose, but still such devices, unfortunately, have not won universal acceptance and is likely to be experimental. Our task is to create a reliable pilotage for training, working out the most complex elements of the AFCS, as well as for performances in the first competition.
The model design is quite traditional, and therefore does not require special explanation. The only thing I would like to tell you more — it’s about placing a sinker on the end rib of the right semi-wing. The fact is that improper placement can “screw up” even a very successful model. As you know, with sharp maneuvers pilotage rotates approximately along the axis passing through the center of gravity and, respectively, through the sinker. If you shift it to the back of the ribs, during the maneuver the nose of the model will begin to go to the center of the flight circle with the loss of a tension cord. And so every time, in every corner of the “square” or “triangular” shapes. The opposite effect occurs if the weight shifted to the front of the rib and is located before the center of gravity. Ideally, position it along the length of the model would be adjusted. But this increasing complexity is characteristic of “acrobats” heavy subclass.
In conclusion, a few words about vicose rudder. Traditionally, it is useful to reject it 8…10° in the direction of the “circle”. But, to understand the consequences of such improvements, to recommend her, to put it mildly, risky. The fact that a good model is simply not able to respond in normal flight, the discrepancy is small rudder. But in critical conditions, when the tension cords often not enough to reduce it due to the constant component of the lift force on the vertical tail is simply harmful. Count that emerged from the obedience model, without participation of the pilot to enter the right turn and restore the tension of the cord, can only desperate optimists.
I. GUREVICH,
the head of the circle