The Soviet school of construction of model aircraft air combat has long since gained worldwide recognition. Although it is possible to speak about the attempts to find new opportunities in the design of “boytsovok”, yet in most of the devices for air arts created by the waste, the established pattern: foam forehead and composing the rear of the “flying wing”. Its advantages – ensuring high durability and survivability model, light weight, adaptability to work – and attracting athletes of the highest rank, and young “men”.
Today we introduce you to the technique of both levels. The first model has helped the two boys from the Kühtai “Penguin” (Balashikha, Moscow region) to take first place in city competitions and fulfill the norms of the first sports category.
The second “boytsovka” – sporting “weapons” one of the most famous masters of aircraft modeling, three-time champion of Europe from Leningrad Vladimir Belyaev (winning in 1983, 1987 and 1989). The mere sporting longevity speaks about the success of non-randomness of the vast experience of the designer, athlete, master of sports of international class.
“Rumble” athletes pervorazryadnikov Poddubny Yu and AV Khleborodova
First of all, it should be noted that the proposed technique does not contain details of balsa scarce and can be created entirely from local materials. Despite this, “boytsovka” is very tenacious, but by weight characteristics approaching balsa superapparatam – the mass of this model is 260 g
Shelves vystrugivayutsya pine spar section 4H11 mm, and the inner end of the wing-section is reduced to 4X4 mm, and the external – to 4X7 mm. Leading edge in the center – 5H17 mm and a height of endings is reduced in accordance with the profiling forehead.
The foam parts are cut termorezakom templates. Grooves under the shelf side member is performed after using the machine “Skillful hands” with a fine cutter. Assembling these parts is carried out with PVA glue, and the excess material for foam forehead is cut termorezakom spar. Then comes the grinding and pasting paper, pre-soaked in PVA solution. Dry forehead trimmed at the ends, where the adhesive mounted end plates with ribs endings.
Power central rib has two parts. Front formed solid bar mounted on the forehead with the help of two-millimeter plywood spacers. Recent reliably dock spar, bar rack and tail section ribs (racks section – 4H11 mm). Rib closes boss.
The next phase – installation of the trailing edge and intermediate ribs. At the trailing edge, which section 5X6 mm beforehand profrezerovyvaetsya longitudinal groove therein after assembly of the wing frame is placed epoxy resin impregnated glass fiber tow.
Container soft fuel tank is assembled from bent pine plates 2 mm thick. Sam tank is made of children’s balloons, one inside another. Such tanks can withstand up to five flights to the “diesel” fuel.
The complete skeleton of the wing in the area of external loads in addition ending in her area are put extra gussets mounted parts management systems, engine mounts and tail boom, followed by a close-fitting transparent Mylar film with glue BF-2. Engine mounts made of profile-corner, rocking – from PCB thickness of 2 mm (rocking axis – duralumin wire Ø 2 mm), as well as hog steering. In a shaker mounted hooks for slinging cord.
The elevator is made of plywood trehmillimetrovoy. It is hung by two hinges textolite-plates on the wire axis, rigidly clamped on the beam (duralumin tube outer diameter 8 mm). The latter is attached to the rib M3 threaded rod.

Development Poddubny and A. J. Khleborodova.
“Rumble” is equipped with a modified engine KMD-2.5. The main purpose of alterations – while speeding relief. Along the way, maximally shortened rear wall and the nose of the engine. As a result, it becomes easier to KMD 20-25 g, and the velocity model is a little inferior to “Rumble” with glow engines – the speed of its flight of 135-140 km / h.
Recommended fuel composition is responsible for launching: kerosene – 35% air – 20%, castor oil – 15%, acetone – 27-28%, amyl nitrite is 2-3%. Or, kerosene – 35% ether and 20%, castor oil – 15% acetone – 15%, benzene or nitrobenzene – 15%.
J. Poddubny, A. Khleborodov, Balashikha, Moscow region.
“Rumble” 1989 European champion of the year, the master of sports of international class V. Belyaeva
Central rib 12 mm thick composed of lime balsa front and rear parts. Two pine spar section 3×12 mm for the wing ends tapering to 3X4 mm. When assembling the shelves close to the central rib glue two balsa nose, and on the DS – 160 mm ribs. The latter, like the rest of the intermediate ribs, made of balsa 4 mm thick. Then glue the two pieces are mounted packing foam. After the machining in their forehead and make the groove width and depth of 4 mm placed therein pine corresponding rail section.
The collected items cleaned with sandpaper and forehead throughout the span of the wing spirally wrapped thread SVM in opposite directions. The same thread reinforced joints nozzles and end ribs to the spar. Forehead fitted by PVA in the paper for the recorders.
Now it’s up to the trailing edge. Prepared for it pine 6X6 mm rail section joined at an angle of 143 ° using pine “corner” and after treatment straight portion length of about 55 mm in the entire assembly is enhanced SVM strapping strand from a strand simultaneous installation tube with an inner diameter of 2 mm. The latter serves to hold the axis of suspension of the elevator Allied wire Ø 2 mm 105 mm in length.
Harvested edge mounted on the power of the wing ribs and simultaneously glued balsa ending. Then put the remaining intermediate ribs. Previously in their places of joints with the paper on top of the forehead skin glue plywood spacers width of 7 mm from the graph paper. The joints at the rear edge of the balsa reinforced corners and right up to the end ribs on the forehead are mounted under the harness similar to plywood backing. Container tank of balsa plates placed over the forehead; place the fuel hose O sutured mm plywood.
The ending left a small plywood pad put wire loop-bracket output cord (OBC Ø 1,2 mm).
The elevator balsa, pasted in the middle of thin plywood. Nylon hog as suspension pivots, tied for M3 screws. Collapsible suspension unit allows you to quickly replace a broken wheel if necessary.
Rocking control monofilament, the length of its arms 55 and 9 mm. The axis of its rotation is duralumin pin Ø 3 mm. In a shaker mounted hooks for cord curved Allied wire Ø 1 mm. Link connection with the elevator – aluminum knitting needle Ø 2.5 mm. 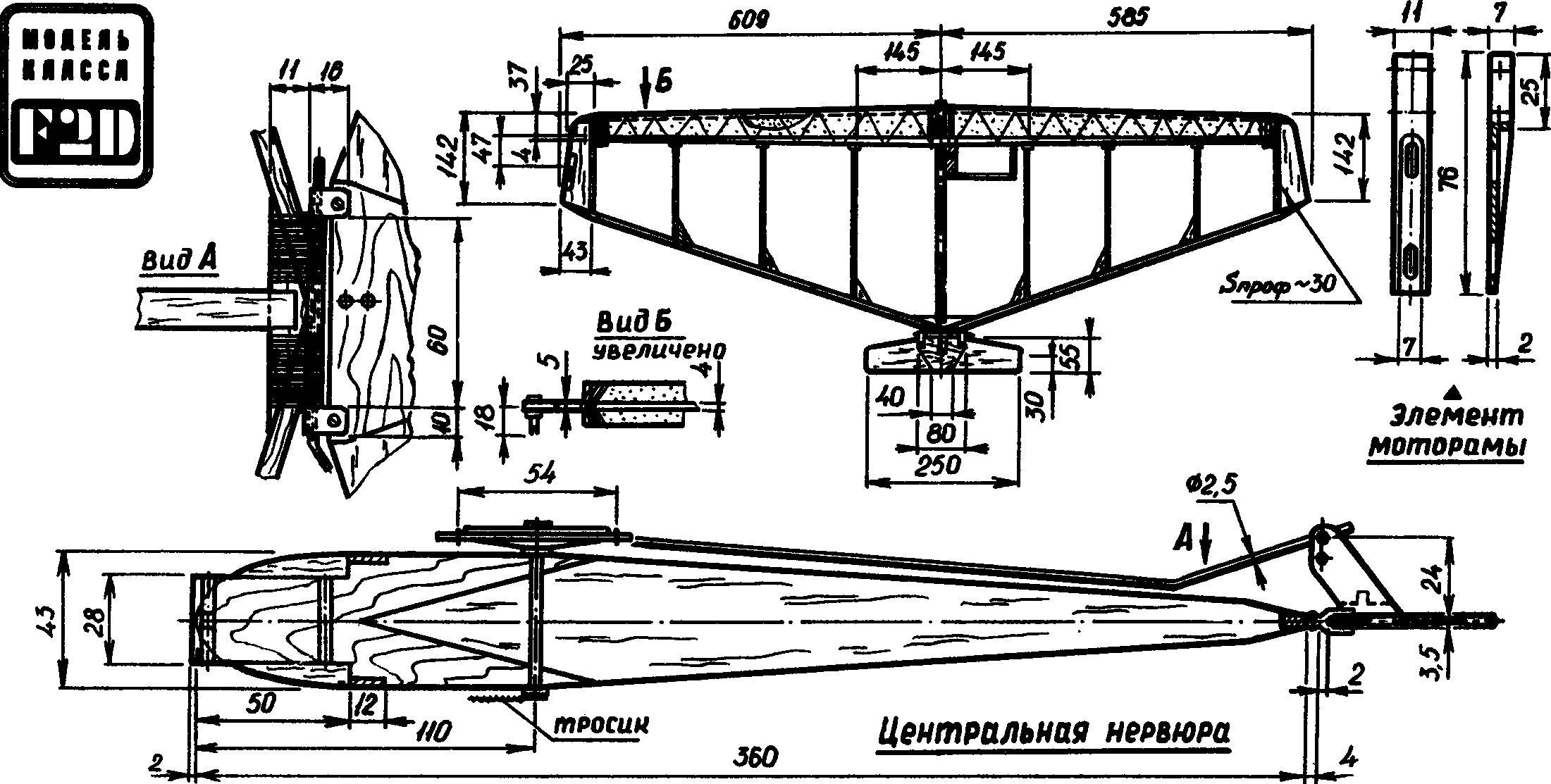