Today we offer modelers an unusual material. If the majority of the publications was based on existing research and was devoted to the already realized results of the design search, then this article is for reservoir engineer V. Viktorova, as if in contrast to them, entirely composed of mere “ideas.” But how many times history of modeling, and technology in General, proved the viability and the viability at first seem “crazy”. Characteristically, they at first met with either resistance on the part of even the most experienced athletes (perhaps I ought to say not “even” but “especially”? After extensive experience of the wealth, but sometimes the “limiter” for anything that does not fit into the framework of experience), or complete disregard.
With this introduction we start because I decided to take the risk to publish very controversial on some points work. Before you make a judgment about it, again and again to figure out what’s more: pluses or minuses.
First of all, about what RC sudomodel (not copy!) in essence. Aside from the rest, it is a tool for the rapid conduction for a given water-surface trajectory… unit consisting of power plant and on-Board radio equipment. This unexpected division of the model in General, the “medium” and “block” due to the fact that the parameters of the latter we can influence only in small ranges characteristics motor power data of the propeller and the mass of the power plant and radio equipment. As for case, it is permissible breadth of design search much more. Therefore, to psychologically easier to perceive the proposed innovations, we consider it “means”.
Thus, the “remedy” for the fastest course. Based on this definition, what are the main requirements for it must show in the first place? Importantly, the maximum efficiency of use of engine power as on straight and curved sections of the trajectory, i.e. the minimum resistance to movement in all modes.
Such prerequisites lead to the fact that ideally, the enclosure must have minimum dimensions! Only then its mass and thus the mass of the entire model will approach the optimal, theoretically providing lowest loss when you hold the model on the water surface at planing. However, this conclusion tends to contradict the requirements to the behavior of the model when cornering.
Most interesting is that until recently, the dimensions of RC gliders was considered as optimized. But after the last world Cup, where fantastic results in all classes show Chinese athletes with unusually small machines, and… here’s another fact breaking the established canons of design. Because until now, there was a belief that it is impossible (categorically!) to ensure a steady movement either light weight or a reduced model (compared to those that are used by leading athletes). I don’t think modelers from China did not know about these canons. Most likely, they simply have carefully analyzed the possibilities of approximation to the ideal low size and weight, RC and ended up with the desired result.
Unfortunately, the design process is rarely taken into account that at a given engine power and other constant parameters of the model and its weight is much more important than anything else. Fashion-leaves-athletes often go “head-on” by, again and again forcing the plant. And forget that in terms of sustainable planning within the framework of our data source does not care to raise the capacity, for example, two times or lighten the boat as many times the speed boost will be the same.
Moreover, light is much more advantageous and on the dynamics of dispersal-braking. And the latter is even more important compared to the absolute rapidity, as almost the half of the distance RC hydroplane is held in such transient conditions. Most athletes are familiar with this factor, and the issue of ensuring maximum dynamism does not require additional accentele. 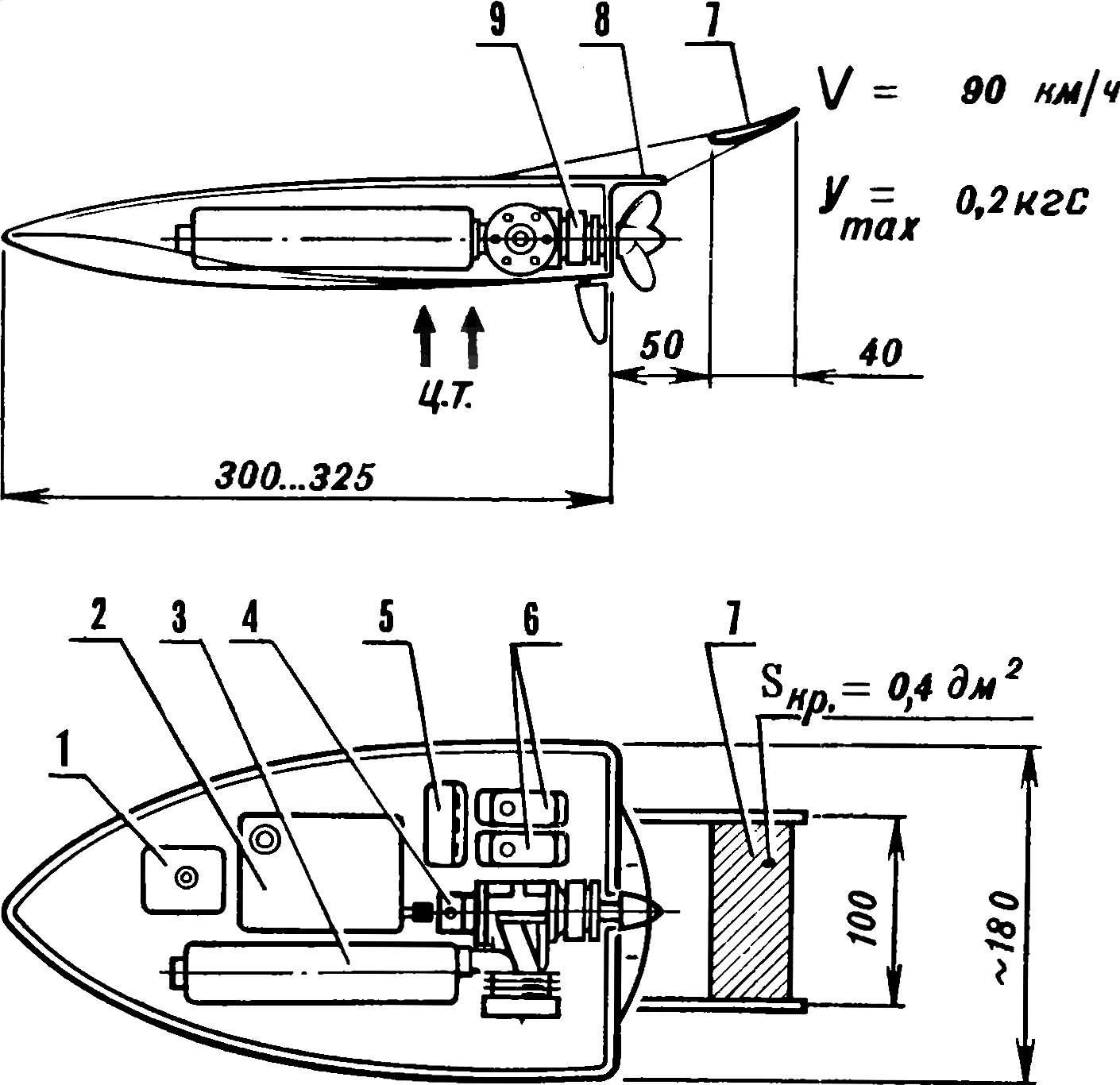 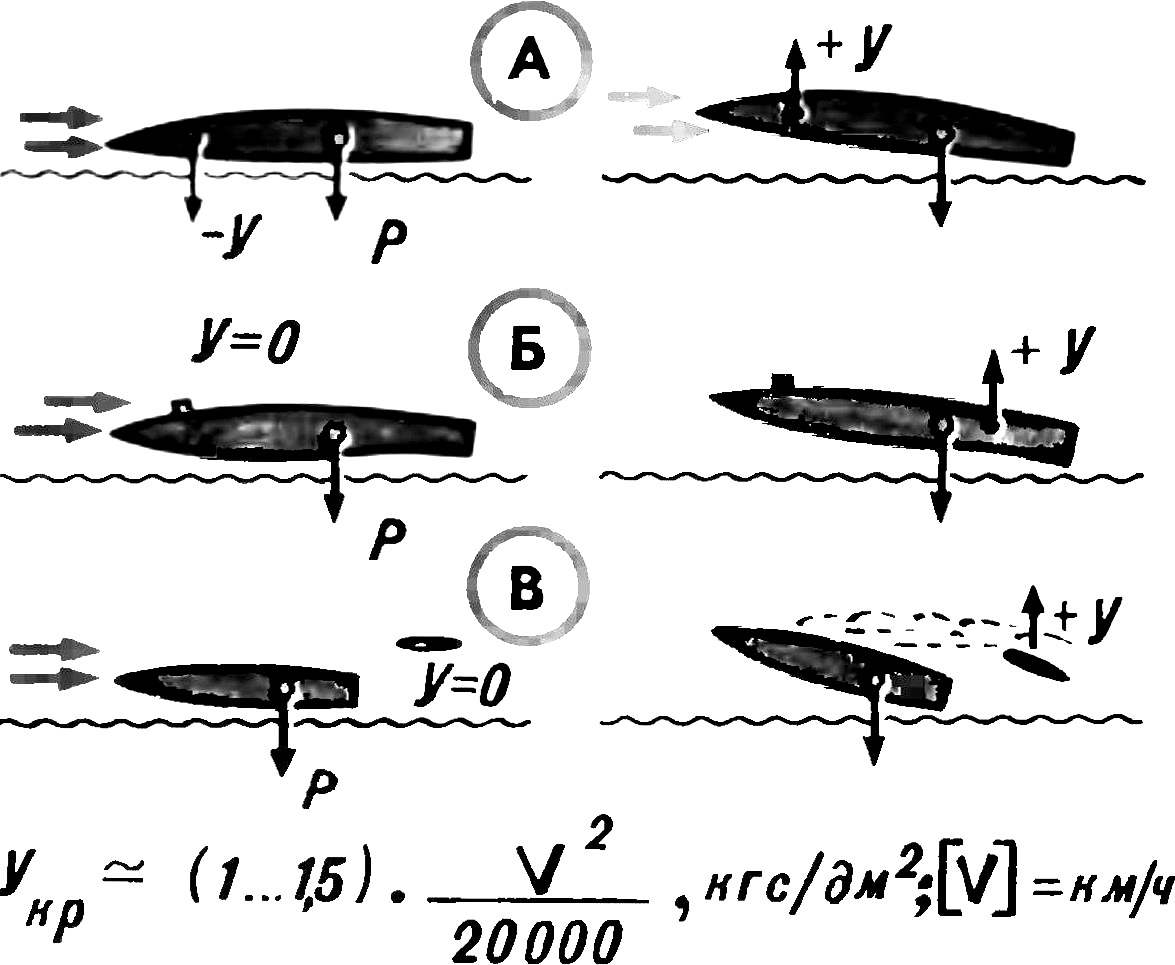 The behavior of various models in case of accidental rise of the bow of the hull:
And the contours of the bow of the “spoiler”, B — lines with snap aft of the bottom and nose “baffle” In the case of the reduced size of the rear wing (stabiliser). Below is the formula to calculate the maximum lift force developed on the pterygoid plate at a predetermined speed. 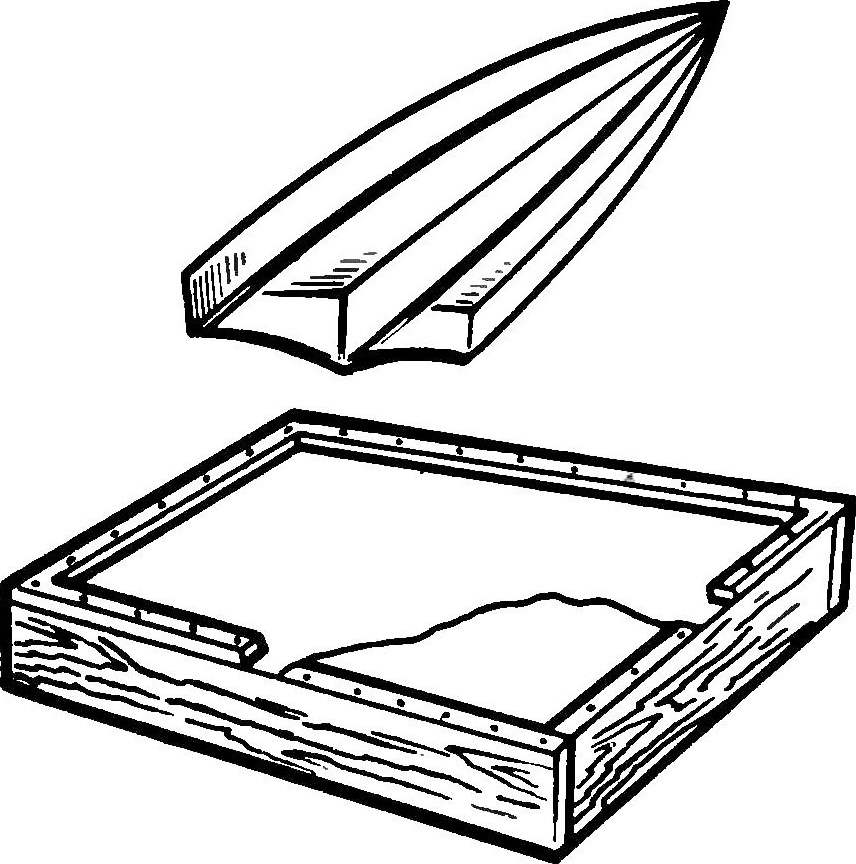 The dependence of velocity on distance for different model types:
1 — optimized model with a reduced maximum speed and satisfactory performance of the braking-acceleration, 2 — a similar model, adjusted only for the maximum speed and have consequently degraded dynamic performance, 3 — model with the same motor dimensions and power density.

The dependence of velocity on distance for models with internal combustion engines:
1 — corresponds to the previous schedule, 2 — model is reduced and light weight, the propulsion system is optimised for the new conditions 3 — similar to 2 mu, but in the scheme used the clutch.
Perhaps such a system will require either a separate control carb and clutch, or their joint work, in which the thrust of the carburetor begins to move after poluraspredelenia clutch. Here, the experiment is easy to carry. It is important when choosing a clutch design to allow smooth switching. One of the possible variants shown in the figures. It is designed on a proprietary brakes for model aircrafts, according to their passport data and constructed graph of brake torque. In the drawings the clutch is shown as a separate node, however, there is a direct sense to combine the clutch with the flywheel of the engine. In the proposed embodiment, the clutch is able to hold only part of the torque, since motor 3.5 cm3 the time comes to 3000-4000 g*cm, the Desired friction is achieved by installing multiple drives on the slave leash of the shaft and counter-elements on the spines of the clutch housing. There are other options of clutches (centrifugal, such as those that are radio-controlled car, or classic friction multi disc), mechanically operated from a conventional rulemaking with the introduction of the thrust of the spring elements to control the brake torque. However, the electro-shaped piece much more attractive as it does not require the use of rulemaking, thereby achieving the simplification of the scheme with a corresponding increase in reliability, and simplification of the model. Of course, unlike aviation brake clutch should consume energy only when raspisanii. 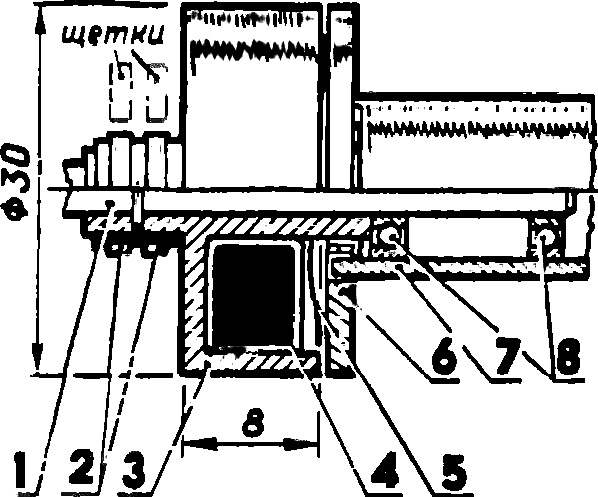 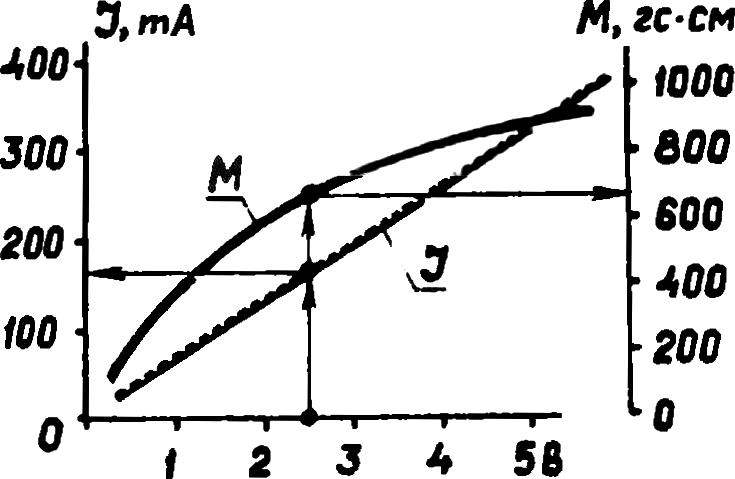 Brake coupler and its characteristics:
1 — the leading shaft, 2 — current-carrying rings for the power winding of the electromagnet, 3 — clutch housing (mild steel, a wall for all parts not less than 2 mm), 4 — coil magnet (wire of PEL of 0.3 and to fill the coil form; winding resistance of about 6.5 Ohms, after checking to impregnate epoxy resin), 5 — spring, 6 — brake disc (a soft steel thickness of 2 mm), 7 — the driven element with a finger-leash within the window brake discs, 8 — ball bearings.
So considered interesting prospects for the development of a radio-controlled speed boats. Maybe not all the design findings will find application in the models of tomorrow. However, when developing new devices, before you reject the proposed solution, we encourage you again to read this article. And, most importantly, to try to distract from the fascinating influence of the usual supertehniki that use of very scarce materials and technologies based on “frontal” methods of speeding up reliable development. And suddenly everything is much simpler!
And last, think, and weigh again — whether or not to engage in such microglossary simplified Moto installations today to tomorrow with the “armored” made from supermaterials and equipped with powerful engines, not to be behind! Maybe the future for the public in the construction of microglossinae!
V. VIKTOROV, engineer-hydrodynamic