The race for sports results brought in the “school” subclasses of automodelisme to professionalize technology. To replace the familiar MK-17 came potentially more powerful engines of the brand MDS. However, if the “Juniors” were already known methods of dealing with their numerous “ills”, the new motors asked the number of problems and issues. But anyway, after a considerable number of specific modifications of MDS reserves its power MK-17.
With this technique, direct drive wheels, designed for the modern scheme of “Trichinella” for the first time and introduces readers “To” engineer-designer A. Andreev.
The power basis of the model is the node formed by the crankcase of the engine with screwed steel plates of the frame 1 mm thick (screws with countersunk heads). To increase the reliability of the connection threaded socket in the crankcase is cut from M2. 5 to M3. It is advisable to use oil TAD-17: it will provide the clean threads without zavolakivaya material on tap (which, when possible, it uses absolutely new, and the entrance is not applied, and after the draft is only No. 2). If you are not sure of the accuracy of the layout of the cheeks, the better to prepare them on a path only after fitting of the mounting on the crankcase.

Fig. 1. Control line racing car with an internal combustion motor a working volume of 1.5 cm3:
1 — spurs, 2 — toe body, 3 — cheek, 4 — fairing cylinder, 5 — rear part of the body, 6 — wheel driven, 7 — spoiler, 8 — driving wheel (both weighted with steel elements that perform the functions of the engine flywheel), 9 — valve of the wall of the housing, 10 — the wall of the housing with the bearings of the crankshaft, 11 — fairings of the walls Carter, 12 — cord strap.
Front cantilever portions of the cheeks are massive toe of the shell model, the main function of which is to provide the desired alignment of the complete microcosm and at the same time loading it up to maximum permissible weight in 1 kgs. The best sock material is brass like metal with great density. At the same billet do with a stock length to weight and the alignment, it was possible to clarify after complete Assembly. The desirable form of the sock shown in the drawings. The upper contour to the front descends, and the bottom is almost horizontal. In the complex with mounted under body spoiler, this design will give the best flow with simultaneous pressing of the tail model. The fact that the wedge-shaped spoiler (and it should almost touch the track Assembly) pushes the air flow, creating under the nose of the machine pressure. And for his stern forming a vacuum, which reduces drag, as if both podsushivaya body to the track. Test runs show that with the racing spoiler is not only more stable but also faster — as can be seen, the reduced slippage of the drive wheels. If necessary, the spoiler can serve as weights, so the material for this part is selected last. Spur serves only to meet the requirements of the rules, on front wheel drive models it is practically not needed. After all, when the engine is running “feed” machines are additionally pressed and more reactive torque from the rotation of the leading “bridge”.
Rear console cheeks joined with part of a wooden body, hollowed out of birch sticks. Finishing of wooden elements, parquet varnish, which increases the resource. Preferably before application of Polish to have a body with customized sockets. Then impregnation will take place in them. The fuel tank is fixed to the body in an arbitrary way: for such a massive power part you can go to the hard mount, without depreciation, directly on the steel cheek. Moreover, as shown, Dorogomilovo position of the tank when the motor feed pressure is required. It is only important that the axis of the nozzle is not left on the outer side (relative to the center of the track) compared to the position shown in the figure.
Tail wheel — the famous knife-like type, as easy as possible, as nodes of their suspension. Requirements for minimum weight, the back of the model with front-wheel drive scheme called sustainable movement on uneven tracks.
Cord strap is fixed with two screws in the milled groove of the sock body. Rejected its backward direction due to the alignment coinciding with the axis of the drive wheels. From this level the axis of the eyelet in the strap slightly shifted back to account for the deflection of the cords under the influence of aerodynamic drag. Only under this condition the model will come exactly at a tangent to the circle track and the rolling resistance of the wheels will be minimal. In the vertical direction of the strap is adjusted so that the main load fell on the left (inner) wheel. Condition turn on only the inner wheel is quite acceptable. This will not only facilitate the work of the engine, but also reduce losses slippage and wear on the outer wheel. By the way, on this basis, we need to recognize the ideal alignment of such, in which a model with a cord strap and a node of the suspension cords on width coincides with the left wheel. 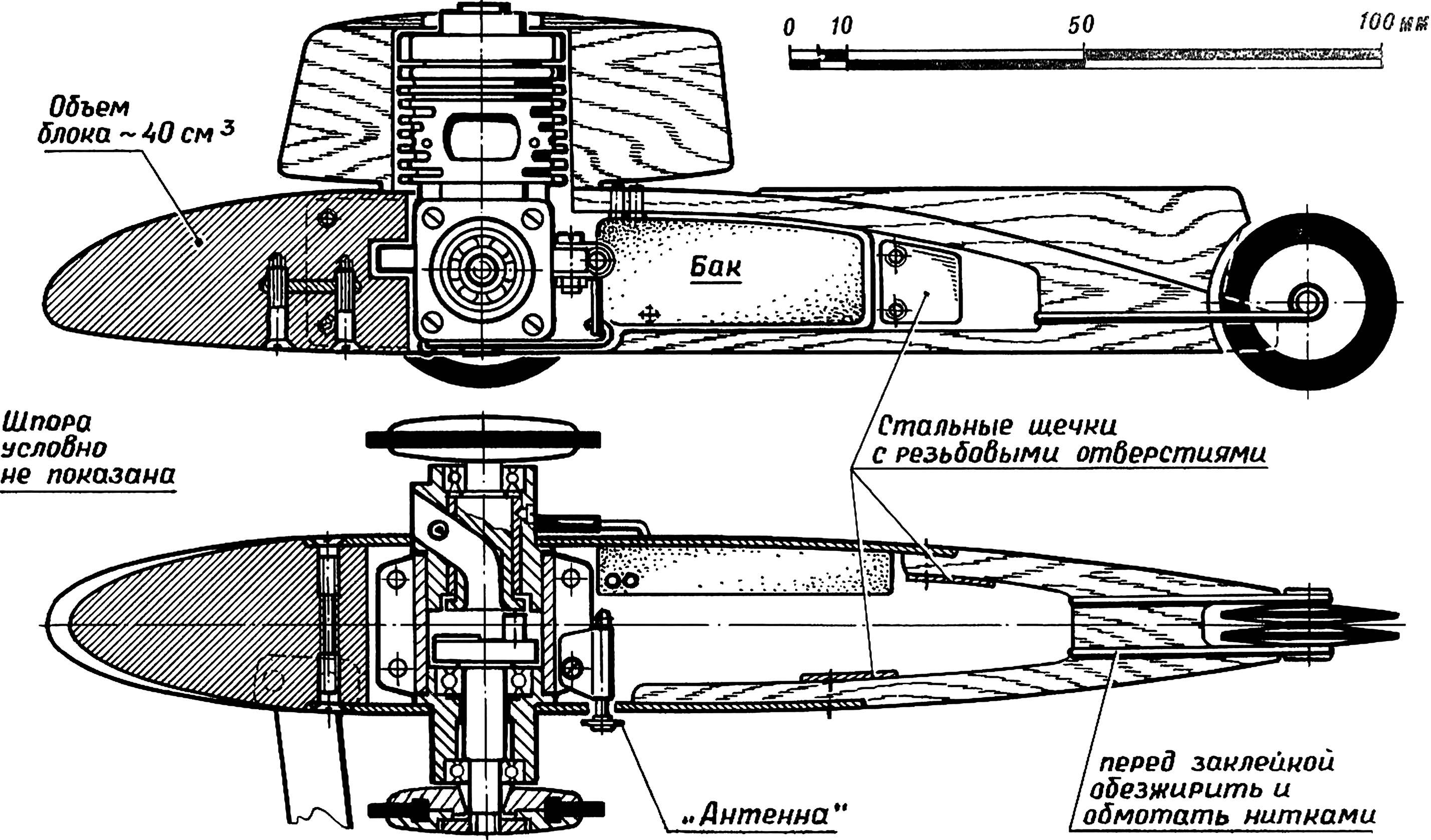 Fig. 2. The design of the car racing.
Engine MDS-1,5 D, of course, modified. In duralumin the new head there is a regular brass controlling. The adjustment screw compression ratio is threaded М8Х0,5, which fully guarantees from samootverzhennyj and eliminates the introduction of a system of locking. The side of the shirt cutting cylinder, and the exhaust window deformeaza screw with flange pipe. Its purpose is to divert the exhaust gas flow containing oil, from rubber wheels (its contamination is undesirable).
The left wall of the crankcase due to the filing of an end face inclined from the cylinder; the space under the bearings pounded. The crankshaft substantially domainserver. In fact, with the maximum relief of the piston it rebalanced, which is justified for the model with direct drive and vertical position of the cylinder. Perhaps the machine with a horizontal cylinder turned out to be somewhat advantageous, but this arrangement complicates the design as a whole.
Right spool wall steel, with replaceable bronze liner, due to the shape of the window in which it is easy to choose the optimal absorption phase. The schema of the intake mixture — optimal for the diesel, what can not be said about the staff serving the flow of fresh mixture not on the cheek of the crankshaft to the connecting rod neck and piston. Valve steel, hardened, polished. The axis of the spool deviations from perpendicularity to the axis of the cylinder has not. Since at high speeds due to centrifugal forces the connecting rod is shifted to the spool, between these parts it is necessary to put solid steel polished washer, thoroughly check their sizes to ensure the connecting rod along the axis of the piston. And on the last finger is the remote Bush.
Fairing the engine head made of wood, chosen empirically cooling channels. It is attached by four additional screws on the cylinder cover. The system stops the engine a bit unusual. It includes a plate with a tube of silicone rubber, hinged at the bottom of the crankcase, and the antenna node with a lever-latch. After sshibaniya UCA antenna shoulder plate is freed, she leans down and thus opens a window in the crankcase Ø 6 mm.