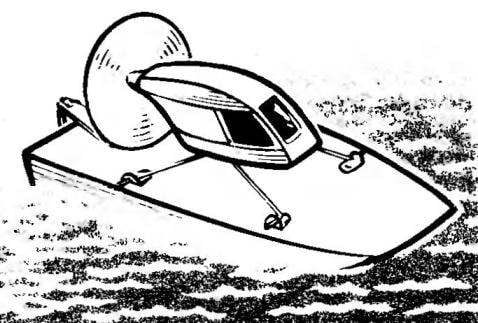 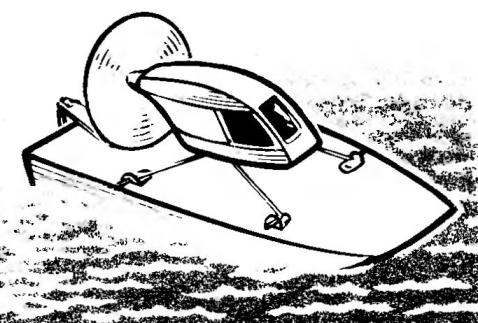 Adherents of certain types of modellers rarely use the design solutions and technological methods inherent in other areas of technical creativity. And it is in vain. The proof is a universal module that can with the most minimal improvements to turn into a car, air or sudomodel. As can be seen from the drawings, the module is a four-wheeled the trike with engine MK-17 “Junior”.

Case universal module, the stacked type. His power base is a solid, mid-frame and rigidly connected with it motor mount. Frame sawed out of plywood with a thickness of 5 mm, mowram is made of plywood 10 mm thick. the Connection of these parts with epoxy glue and the joints of the motor with mi-del-frames are reinforced with plywood gussets mi (s).
Module chassis — hardened steel wire brand 50KHFA or OBC with a diameter of 2.5—3 mm. Good stands are obtained and long dural of knitting needles with a diameter of 4.5—5 mm. note that the front pair (and rear pair) of the uprights is curved from a single piece of wire. To Midel-frame racks are mounted with two M3 screws with nuts and dural lining. Gear wheels with a diameter of 40 mm plastic from an old children’s toys of appropriate size. Fixing the wheel on the axle of the landing gear using two washers, fixed the threads with epoxy glue.
The elements of the frame housing cut from pine slats and use plywood gussets are joined with each other and with the midship-frame. The crankcase and the upper part of the casing closes the hollowed out lime hollow fairing. Before the engine is fixed the fuel tank is a plastic bottle from — under medicines with a capacity of 30-50 ml will be enough for engine starting and for five minutes of his work. The cork bottle drilled two holes — one a gas and the second under the drain pipe. At the bottom of the bottle with nuts and washers fixed to the threaded sleeve — fitting PVC tube under the power of the motor.
The paneling in front of the universal module is best made of transparent or tinted Mylar film, thereby simulating the cabin Windows. For this Reiki twice promazyvaetsya with glue BF-2 with intermediate drying, after which the frame “Windows” overlap pre-cut pieces of Dacron. Finally the film is fixed on “the frame” with iron, which warms up glue joints. Then, when you increased the temperature of the iron carefully proslejivaetsya the film surface, which causes it to stretch vtupuyu. 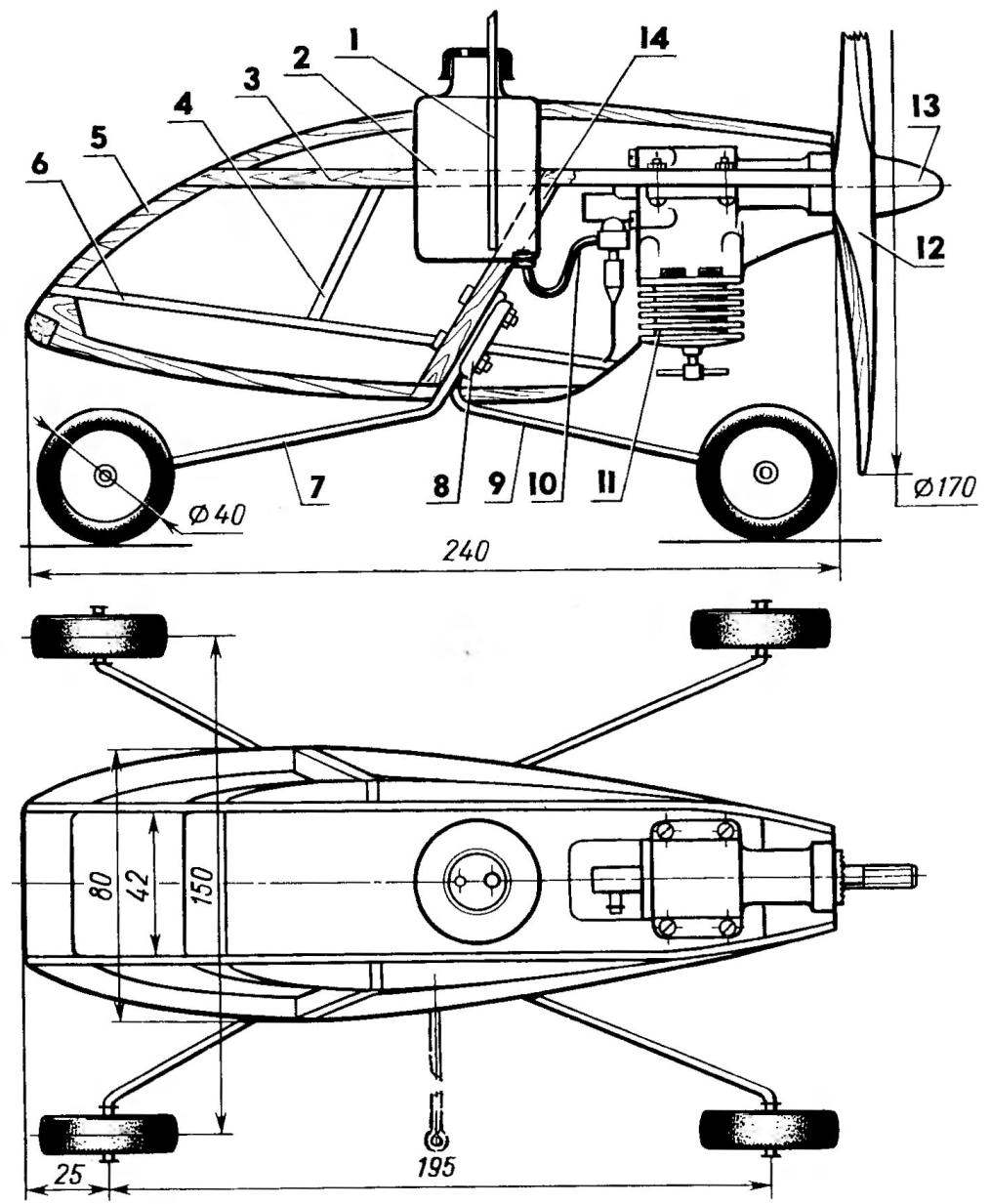 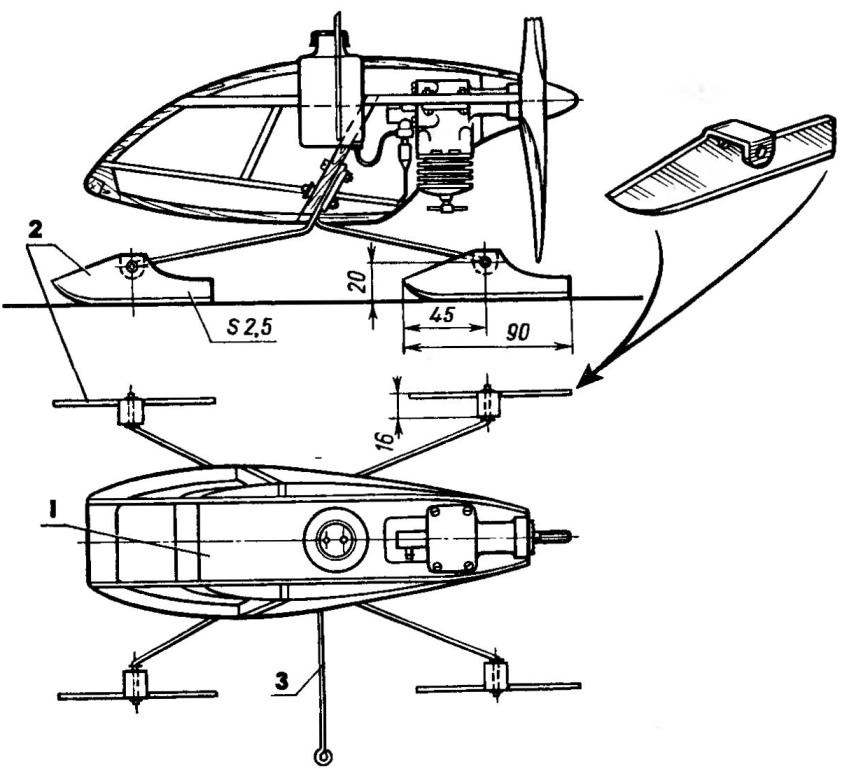 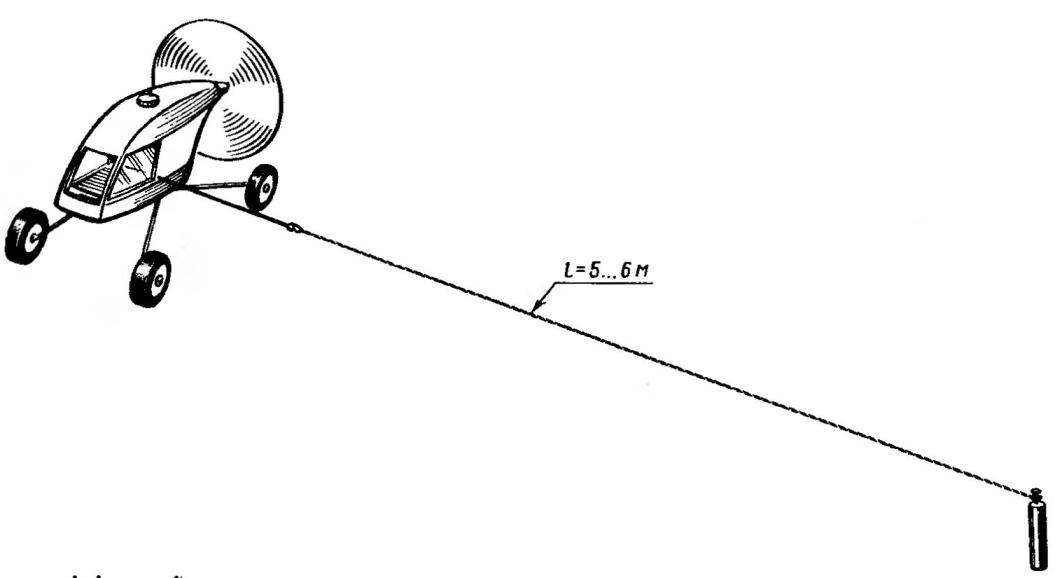 Starting the car on cords. 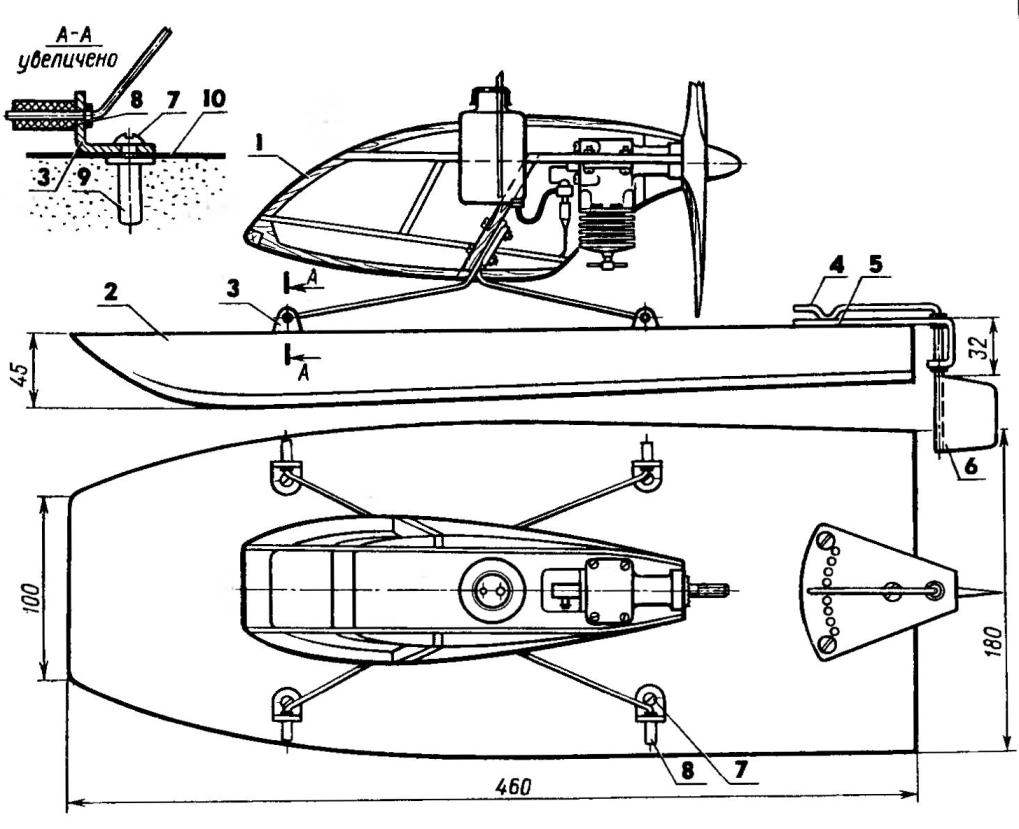 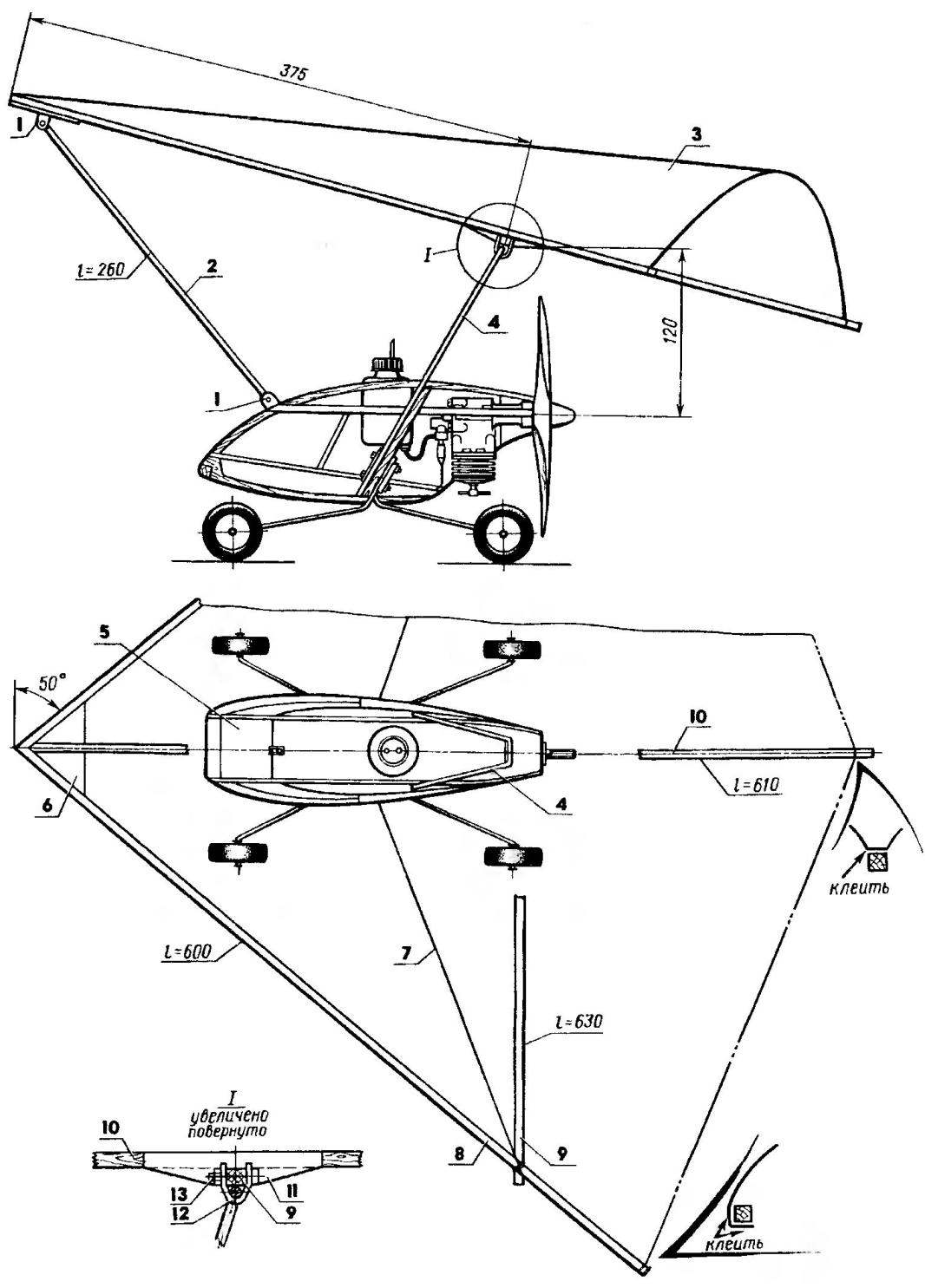 Model ultralights:
1 — hinge-plug (aluminum s 1), 2 — brace (aluminum Ø4), 3 — the wing skin (Mylar film), 4 — pole (aluminum), 5 — a universal module, 6 — Klondike solitaire (plywood s2) 7 — brace (wire Ø 0,2), 8 — side panel (pine, raked 7×7), 9 — cross member (pine, raked 7×7), 10 — stringer (pine, raked 7×7), 11 — strengthening (plywood s2), 12 clamp (aluminum s1,5), 13 — bolt with nut-M2.
The remaining surface of the shell upholstered drawing paper, and then trim shall be cleaned with a slightly moistened with water with a cotton swab. After drying, the paper is stretched to form a smooth surface. And finally, the sheathing is covered with a nitrocellulose lacquer or emelita.
The engine hood from lime wedges and millimeter plywood (fit and presspan — durable, smooth and thin cardboard). To Motorama and the mid-bulkhead hood is secured by two small screws.
After the final processing of the case inside and out is painted by nitroenamel the right color and covered with two layers of two-component parquet lacquer — this will prevent the model from exposure to the fuel mixture and make the surface perfectly smooth.
Thus, we get the first version of the universal module, the control line car with aerodiesel. Note that a standard propeller, which is equipped with motor MK-17 — drawing, and our “wagon” requires pushing. To make this easy from almost any dense wood (oak, beech, hornbeam and birch) on the sample and similarity of the regular plastic — of course, in the mirror.
Start the car should be on the cords, which in the module design provides for the installation of cord strap. In this case, it is the role of a section of steel wire (the same that went into the making of chassis): on the outer end of its bent loop under the carabiner cords with a length of 5-6 m. the Runs in the box will allow beginners to master the preparation of the fuel mixture and engine calibration.
the car-snowmobile is distinguished from summer only by the skates to take the place of the wheels. Skates are cut from a sheet of brass or duralumin thickness of 2.5 mm. are Mounted on the axles they are exactly the same as the wheels. The model runs like a wheel on cords.
Not too difficult to convert universal module and sudomodel — airboat. For this you will need a planing hull, which with the help of simple bracket set universal module. The easiest case can be made of packing foam. This material is easily handled, razor-sharp knives or glow by an electric current of Ni-chrome wire. After final processing the body two to three times greased with epoxy glue. For mounting it dural corners and the steering devices are used screws or self-tapping screws and plastic dowels reduced, usually used for installation in concrete walls. In the case that a hole is drilled where epoxy glue and inserted a shortened dowel.
The steering arm is bent from aluminum plates of thickness 2.5 mm. the Rudder and tiller from a steel wire with a diameter of 2.5 mm. the Steering is feather — half of bent tin strips soldered to the stock.
To run an airboat on any closed body of water. Adjust the position of the tiller so that sudomodel described a circle, or, as sailors say, moving with the circulation.
Another, more sophisticated modification of our universal module — model ultralights. For mounting the Delta wing on the mid-frame with curved dural plate and screws with nuts M3 established by the Central V-shaped pylon, bent from a long aluminum knitting needles with a diameter of 4-5 mm. the Frame of the wing is assembled from pine slats cross-section of 7×7 mm and plywood gusset thickness of 2 mm. Soft part of the wing is made of thin Mylar film glued to the rails of the frame CPEM BF-2. The installation angle of the wing is about 15°. The wing is fixed to the Central pylon with dural clamp and bolt M2 nut. Additional fastening elements of the wing — front strut from dural spokes with a diameter of 4 mm and a pair of braces.
It should be borne in mind that the installation angle of the wing may need to be adjusted, so the front strut it is better to do longer and in the process of debugging a model to reduce it.
The proper model should be fairly easy to plan. With a sharp dive should increase the installation angle of the wing in pitching (usmiani) is reduced. To run such a model is better on the lunge with a single thread: del’talet should be quite stable to survive the flight and a smooth landing after engine stop.
To turn the generic module in Svobodnaya model, it takes approximately one and a half times to increase the linear dimensions of the Delta wing. When you run this model, it is recommended to debug the stretch so that it described a circle — otherwise del’talet easy to lose.
Four modifications does not exhaust the possibilities of the universal module. On its basis it is possible to create models of airplane, flying wing, airplane-duck hydroplane catamaran, and many other car, air and boat.