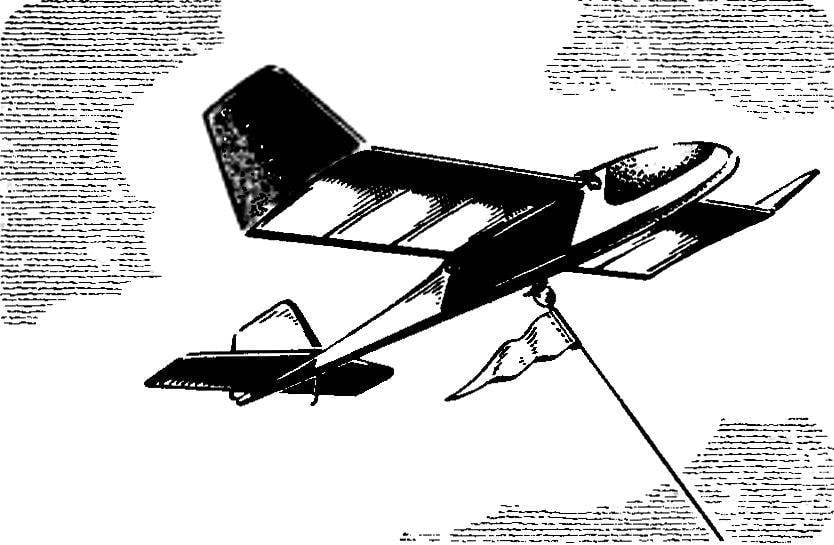 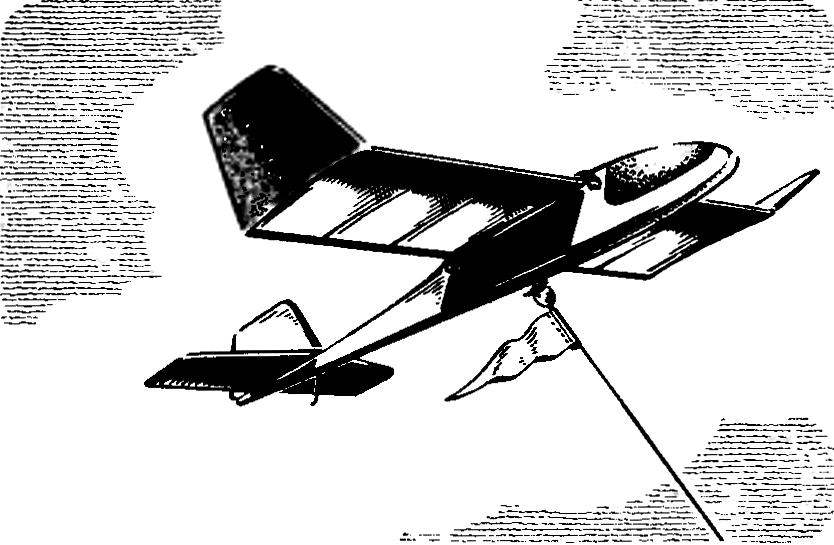 The development of the increasingly popular class of model airplanes-gliders reduced dimensions traditionally associated with increasing complexity and increasing elongation of their wings. One of the attempts to show that there are other, much more affordable and effective ways of designing paritala class A1, was made in the “M-K” in 1992 with the publication of model with a simplified power circuit.
And today we want to introduce the adherents of the expense of building a traditional glider with a different direction, which to modellers may seem somewhat unexpected, so unusual settings has new appliances. However, it is better to tell about the history of unusual models in order.
The main reason that forced us to take up design search, there was a need to provide novice club members, and have already passed the stage of simple schematic, technology transition type. After building a pair of “dureena” not too well, flying gliders is almost impossible even to say that the boy has gained the experience to create the glider of the class A1. Therefore, there were drawings very brachypterous, simple, technologically advanced and extremely durable model. At first, we deliberately departed from the requirements for maximal condition aerodynamic performance in favor of reliability and simplicity. What was the result, clearly seen in the drawings. However, we still have to explain that to completely ignore the design principles of paritala we certainly did not. Ultrashort wing, in addition to the aerodynamic shortcomings, has some advantages for high Reynolds number when a significant chord — hence, it was possible to hope for a good aerodynamic efficiency of the wing at moderate values of lift coefficient. Based on these assumptions, the “ears” are designed as elements solely to provide lateral stability and load-bearing functions remain well-developed Central part of the wing. Now you will understand the logic that led to such unusual ratios of elements of bearing planes and such a large cross corners “ears” when viewed from the front.
The calculation of the average values of the lift force with a high quality profile and thus a higher airspeed allowed at the same time reduce the effectiveness of the horizontal tail within reasonable limits. So, the new model of the airframe efficiency of the stabilizer is 0.54 at the average values of this quantity in the modern models of class A1 in the range of 0.8—1.0.

As for design features — they are all motivated by the desire to avoid the use of a little bit of scarce materials and construction technologies to approach the elementary sets of parcels. Knowing how many difficulties and inaccuracies due, for example, with the manufacture of the ribs for beginners, we in the original version laid the wing collected in stages on the flat the stocks of two sections — front and rear, with clearly omosanya sections of all parts of the set. The forehead of the wing is going on the familiar to modelers techniques. The tail also is typed in the following way. First, on a flat Board with pins prick the bottom diagonal a set of “ribs” (by the way, is easier to calibrate the length of the finished strips and depending on the overall error of their length only to adjust the position and the entire trailing edge, not to drive each diagonal rail in place). After that, the strips pressed against the top of the plywood gusset plate and the front “dry” mount the shelf Assembly of the spar with a pre-prepared grooves for the slats. Now it remains to put the auxiliary spar (in the ready set the main target of the reinforcements finished the racks for the sustainability of their compression) and the remaining top stack “ribs”. In conclusion, all seams shed svezhenakleennyh resin, after curing, of which the tail wing is removed from the pile and additionally shed from the bottom seams. Just have to glue the rail back edge and make the cleaning of the frame flat, “kuriltai”. I think when you have in hand a ready host, you will surprise him strength and stiffness on jacket with a small total mass. Ready head and tail are controlled by precision docking at the spar. If necessary, the seam zone are processed, and the wing is going completely on the flat bench with the use of plates for langeronii portions of slats 5 mm thick. the Finish operation — the installation of the bars-billets for endings and treatment of their profile. It should be noted that the cutting plane for the installation of “ears” has a concavity corresponding to the cross section of the concave lower surface of the wing at an angle of 45°. It complicates work, but gives you the opportunity to profilerate plate “ears” to improve the efficiency of them as elements to stabilize the model on a roll. 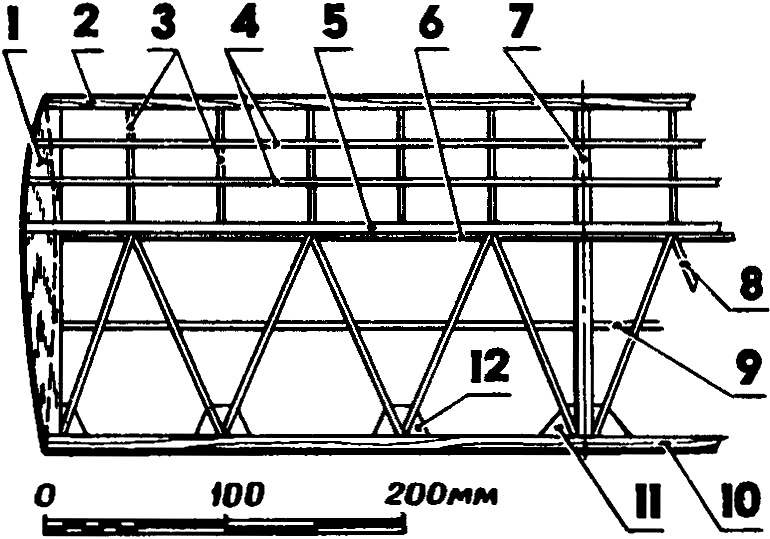 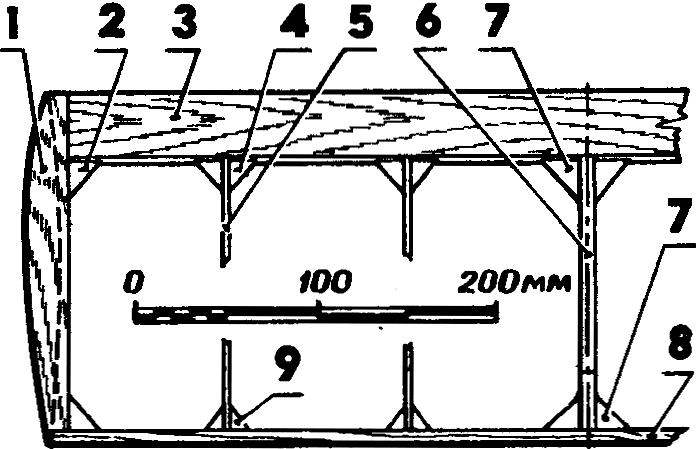 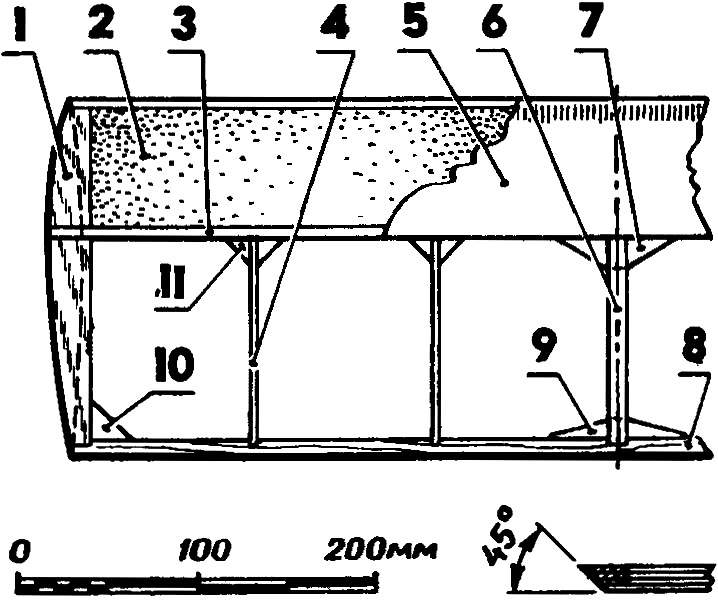 A simplified version of the wing:
1 — ending with an oblique cut (light lime), 2 filler forehead (melkosortnyj packing foam, the workpiece is cut using thermotron templates profile), 3 — monolinuron (pine 4х12 mm), 4 — rib (lip thickness 2 — 3 mm), 5 — skin of forehead (thick writing paper for casein glue or epoxy resin), 6 — the Central rib (lip 6 mm), 7 — power scarf (plywood 3mm), 8 — trailing edge (pine 4х12 mm) 9 — the growing edge (plywood 1.5 mm), 10 — corner gusset (plywood 1.5 mm), 11 — Klondike reinforce the connection of the rib with the spar (3 mm plywood). The external covering of the entire wing — Mylar film with thickness of 0.02—0.025 on the glue “Moment”.
In the original version, the fuselage was made by the classical models for expense of building a traditional model — lightweight at the rear, but the most technologically advanced (to the point that we refused to reduce its thickness to the tail, causing the entire length above the size of the fuselage is equal to 7 mm). The strength of it, even with the balsa nose exceptional. And the developed width in the rear makes mounting a flat tail.
The technology of making “ears” of the wing, similar to the keel and the stabilizer, fully understood from the drawings. The only thing I would like to mention — the paper for covering the foam inserts should be checked in the test samples as adhesives stitched. By the way, during this check you are able to gain experience to perform similar operations. Ready paper-foam parts can be simply ulcerate oil or synthetic varnishes or paint. The wing is fitted by a Mylar film with a filler (it’s called “synthetic tracing paper”), or mcalenney paper on Amalia and lacquered the same nitrosatable. 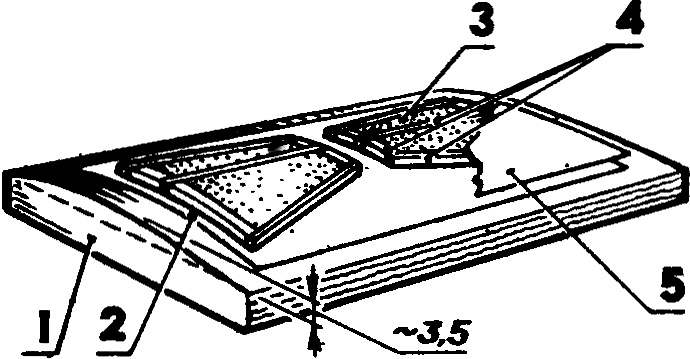 The technology of making “ears” of the wing:
1 — profiled Board-stocks, 2 — bottom sheet (thick writing paper), 3 — leaf filler (packing foam thickness of 3 mm), 4 — detail of edging (pine 3×3 mm), 5 — upper sheet. The elements of the stabilizer are made similarly, on the flat bench.
The wing profiles:
A — original version B — simplified version, In a stronger version.
Having made the first model of the new model, we were initially surprised by the overall strength of the unusual light-winged soaring leader. The second stage of the surprise came when it turned out that the model needs to conform with the rules of downloading almost 100 grams! The fact that the actual glider was weighing just 124 g. Weight is trimmed of its elements is as follows: wing — 66 g, the fuselage 38 g, tail included — 20 g. When talking about weight might be interested to get acquainted with the weight of the paper-foam parts. As an example we present data for the stabilizer with the profile of the “flat plate” with a thickness of 3 mm, edged in foam with pine slats cross-section of 3×3 mm and with a Central rib insert 3 mm thick: foam filler — 3 g, wood details — 3.5 g, paper trim panel — 4 g, glue — 2.5 years old are Ready stabilizer weighs from 13 to 14
Producing the desired loading of the model to the standard take-off weight of 220 g (for which, alas, had to open the paneling and punch in the fuselage of the lead block on the centre of gravity of the glider), began flight tests. Of their details we will not tell, as through it you will be very helpful to do ourselves. Moreover, the strength of the new model is that to treat her as you like. We say only that after completion of the tests, we immediately laid a series of similar gliders, and designed not only for production and exploitation of newcomers, but also for competition purposes. In addition, there are two versions of the same car in which “blind” mass of the lead weights is translated or further hardening of the reinforced parts of a set or transformed into a modification and simplification of technology of manufacturing parts.
None of the options for installation of mechanized tow hook not provided for — in all cases well suited to the hook laterally offset from 4 to 13 mm. Straightness of the trajectory of the take-off by rotating (changing) the mounting angle of the keel. Adopted a system of compensation force asymmetrically installed the hook at the expense of different-sized twist right and left halves of the wing though, and tested on test, not too justified. Much more effective than the use of straight wing with compensation of moment of the vertical tail in this form, the glider on the rise in the guard rails cannot simply accelerate to amazing speeds. Best is reset lifelines are not at the Zenith, and at an angle relative to the ground about 50° — 60°. Of course, to accurately measure the actual height of the model launch failed, but visually it clearly exceeds the height of casting even a good championship glider of class A2.
On the basis of the unusual features of the start and increased as the speed of the model suggest that while debugging to depart from the usual methods adopted in Svobodnaya technology. Also we should not forget about the effect associated with the transition from a PLANO-convex profile of the stabilizer to a clean flat plate. Without going into theoretical details, just note that this transition “pulls” behind itself necessity of increasing the angle of installation of the stabilizer 1° — 2° above (relative position with PLANO-convex plumage). Also you need to remember that the aerodynamic characteristics of brachypterous models differ sharply from the conventional and the optimal ratio of the coefficients of drag and lift forces can be in the region of the unusual modes of planning and towing on the guard rails.
V. VLADIS, engineer-aerodynamicist, head of the society of modeling