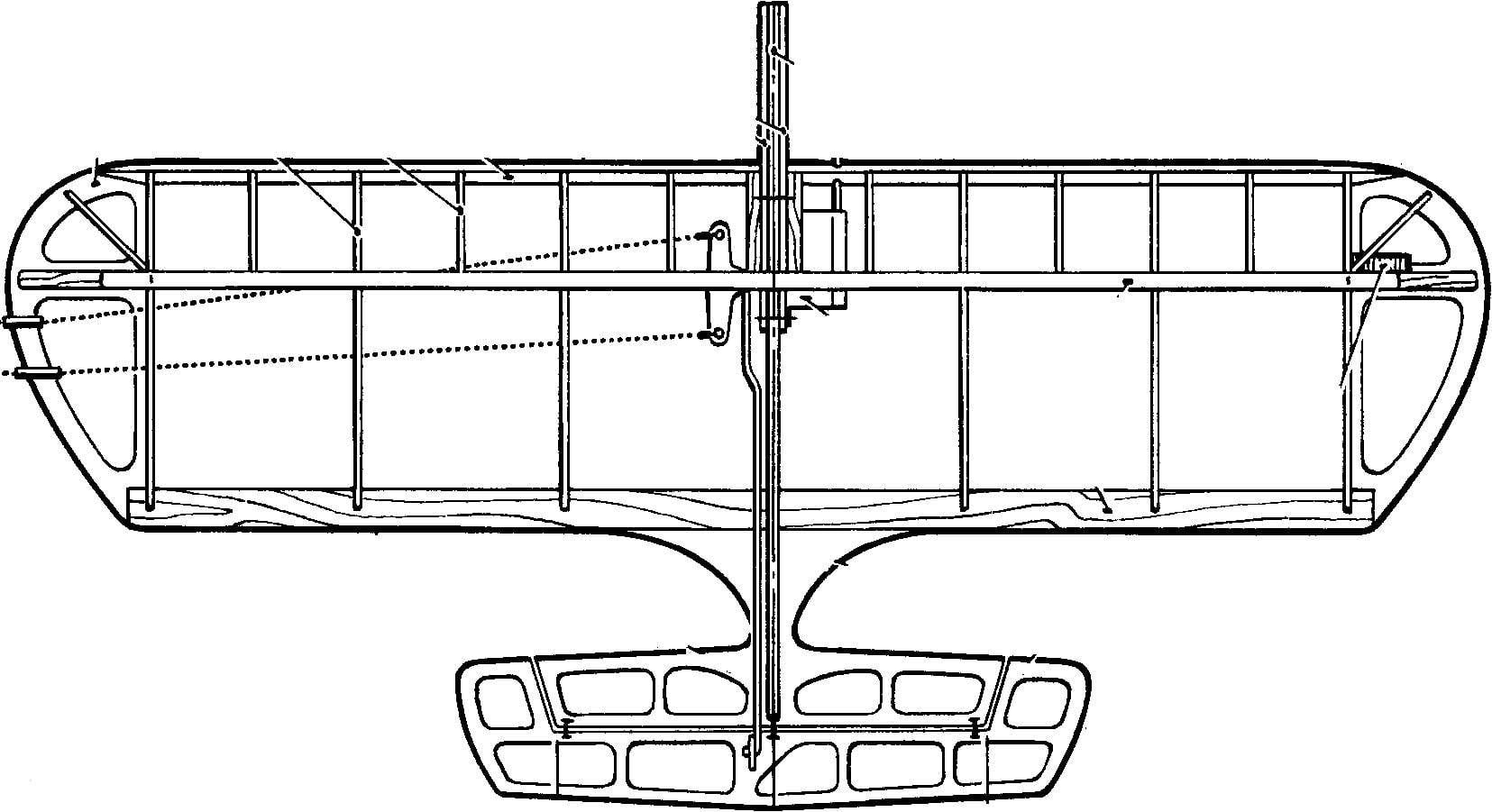 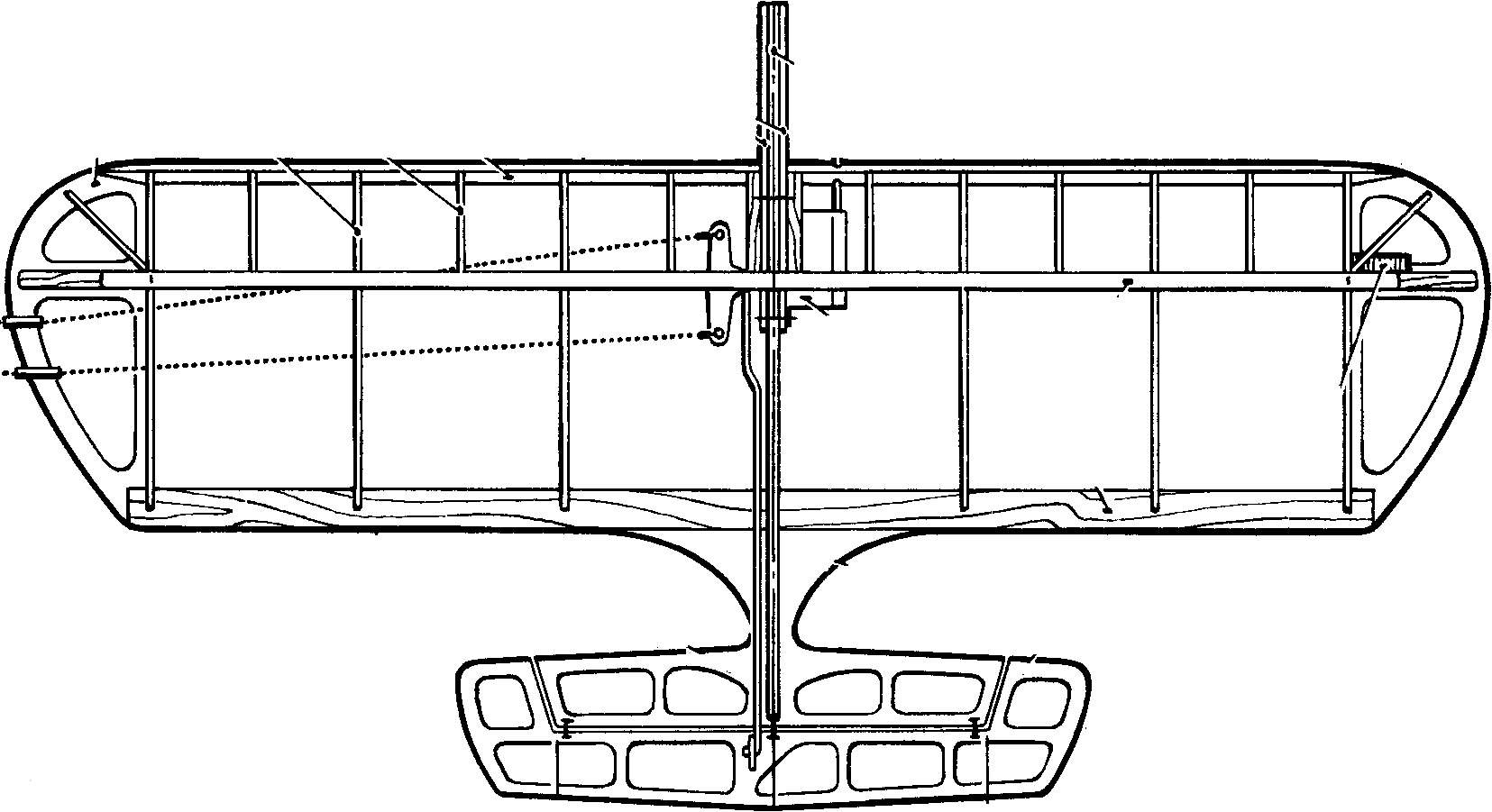 A spectacular sight — “dogfight”. No wonder, therefore, that the coming in groups the boys want to build it bouzouki, and as soon as possible.

A model aircraft club in the summer camp? It is no secret that the equipment and material resources is largely inferior to stationary mugs syt and houses of pioneers. And here can get it bouzouki. While the management science model comes after a large number of accidents and breakdowns. Therefore requires a tenacious, collected from the most affordable materials technology.
In our group designed, built and comprehensively tested training bouzouki two types. They are made entirely of pine and 4-mm plywood construction brand. Both models were designed for a domestic “engines” working volume of 2.5 cm3, and their smaller versions — under the engine MK-17 “Junior” (the length of the cord in this case is reduced to 10 m). By the way, the latest models more than others suitable for the conditions of summer camp.
Bouzouki aircraft schemes (with a strong tail with the stabilizer) has a classic longerone wing. The basis for the design of this machine was published in the “M-K” № 11 for 1983 “For combat and aerobatics.” The proposed log model due to good design is liked by many members. We simplified it and adjusted under the “plywood” technology. One of the features of the original version — horn-large compensation of the Elevator are saved. And overall dimensions and area of the planes we have reduced.
The fuselage, together with the keel and engine mount are cut from a single piece of plywood. Two pads assigned to both sides of the fuselage are increased motor and fuselage. Six ribs, and the same polonorum performed again from the construction of plywood. The Elevator and stabilizer initially processed as a single part, and after running Windows facilitate and profiling edges are separated (sawn).
For all the details useful to prepare metal templates that will allow you to build models in series.
The fuel tank is mounted behind the lugs M3 screws on the right side of the fuselage between the shelves of the spar. By the way, the holes for these screws to perform better even before Assembly of the frame of the wing. Fuel tank design of the same type, the same is placed on the “flying wing”. Highly recommended to use tanks with welded baffle (anti-wall).
Assembled model is covered with two layers of nitrocellulose lacquer and after it dries fitted by a Mylar film in the “castle”. 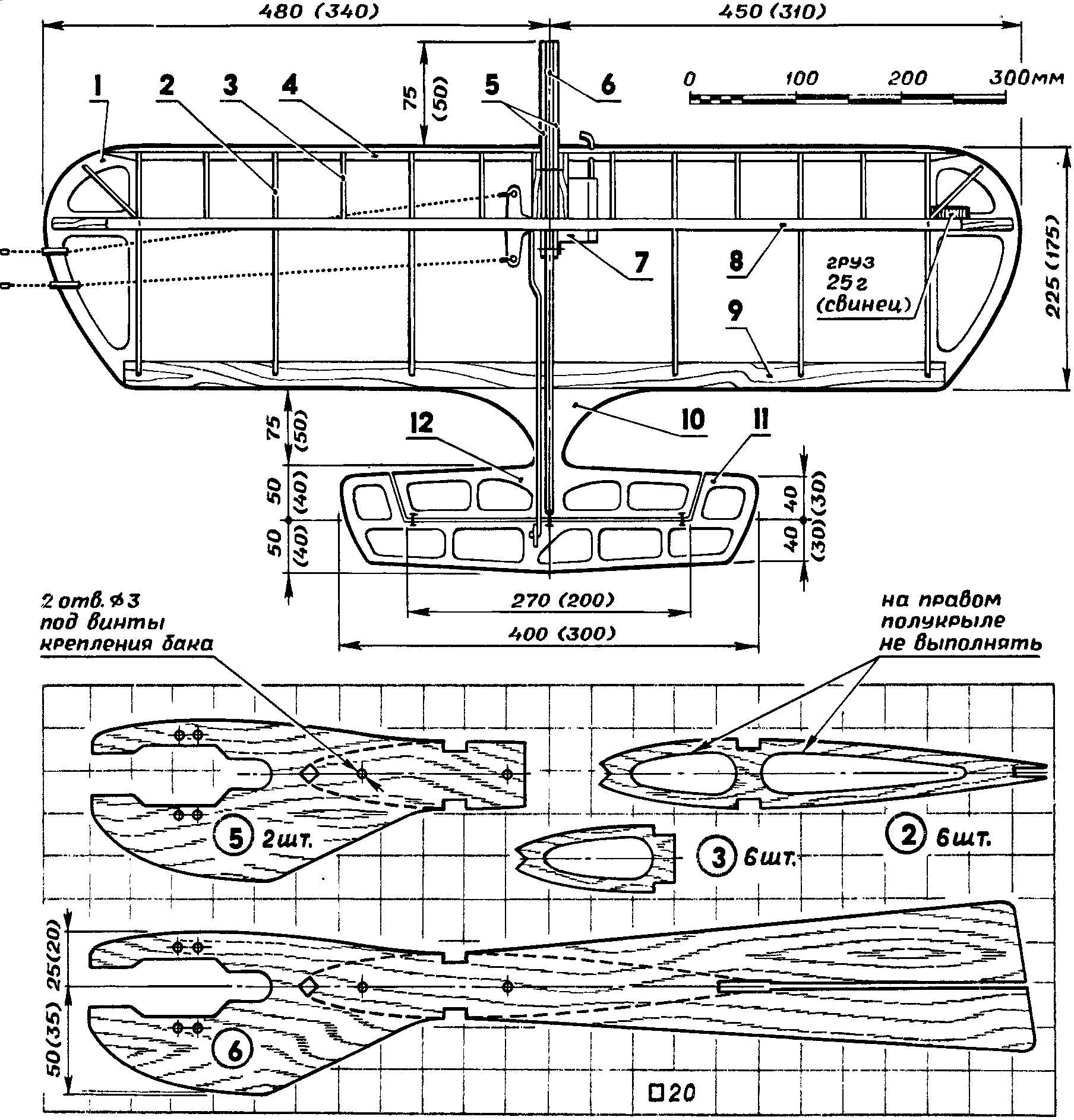 Control line model airplane diagrams:
1 — ending, 2 — rib, 3 — polonaruwa, 4 — front edge pine (6×6 mm), 5 — pads, 6 — body, 7 — fuel tank 8 — shelf side member (pine 3×10 mm) 9 — rear flange (pine 4õ25 mm), 10 — fairing, 11 — Elevator 12 — stabilizer. Details 1, 2, 3, 5, 6, 10, 11, 12 — plywood 4 mm (construction). Dimensions in brackets under the engine 1.5 cm3.
The model of “flying wing” design fundamental differences from aircraft bouzouki has not. The trailing edge can be performed from a single piece of plywood, and the team of three parts. Finished items are cut on the metal patterns, and the two Central ribs are made entirely from the engine mount, and between them is placed a gasket of similar material for strengthening. In the ribs, polonaruwa and endings are cut Windows of relief.
As the previous model going on PVA glue or other binders, suitable for works with wood. The chair control is mounted between the flanges of the spars according to the standard scheme: with a wooden insert with a thickness of 10 mm. This solution allows not to weaken the rails of the shelves, as the rocking axis is fixed by an insert. Pull the helm from the wire-spokes Ø 1,8—2 mm is passed between the Central ribs. Trim and cording of “flying wing” aircraft of the same model schema. 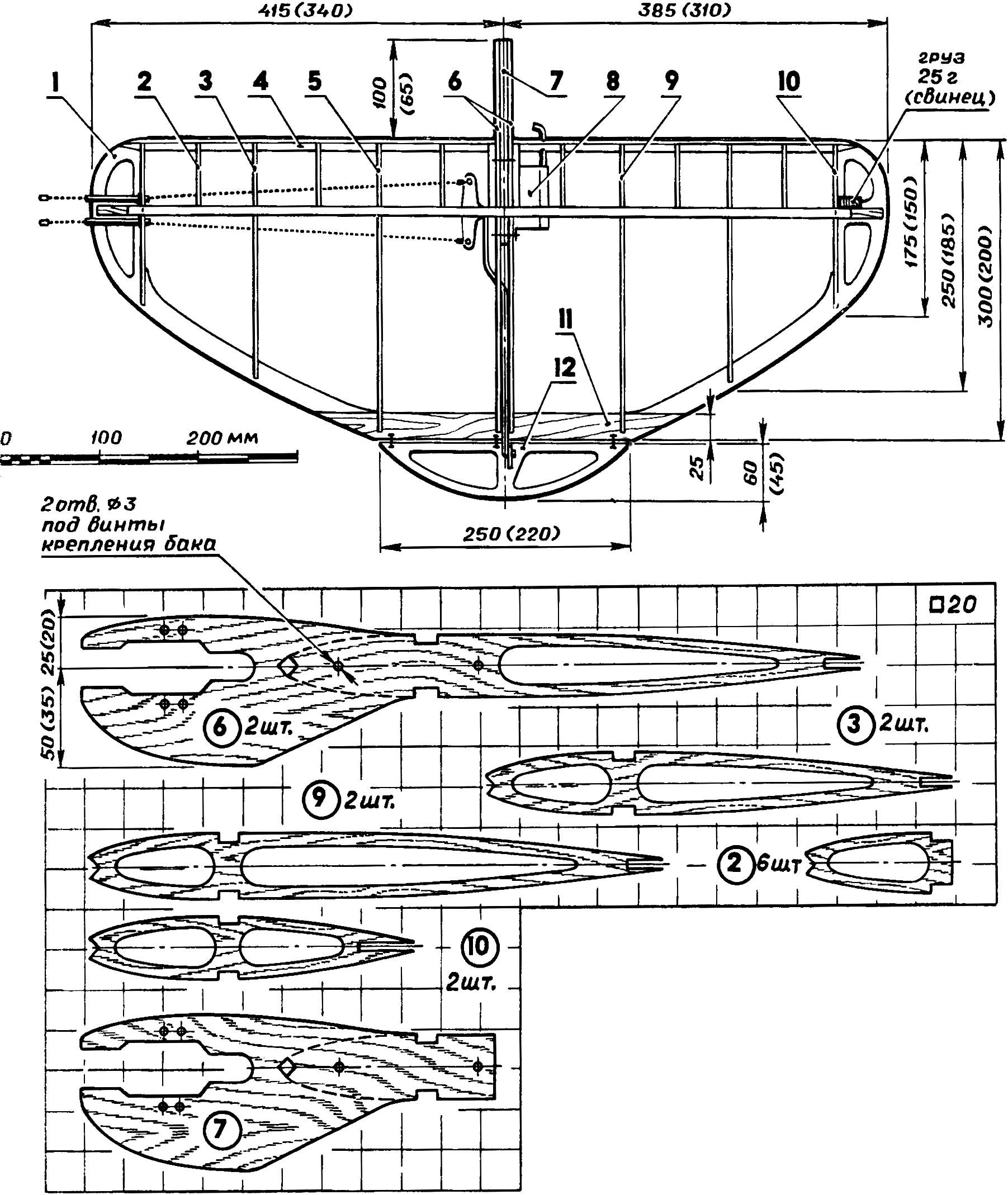 Cord model “flying wing”:
1 — the rear edge with a tip, 2 — polonaruwa, 3 — rib, 4 — front edge pine (6×6 mm), 5 — shelf side member (pine 3×10 mm), 6 — piece Central rib with engine mount, 7 insert, 8 — fuel tank 9, the inner rib, 10 — rib external, 11 — rear flange, 12 — wheel. Details 1, 2, 3, 6, 7, 9, 10, 11, 12 — plywood 4 mm (parts 1 and 11 may be made integral). Dimensions in brackets under the engine 1.5 cm3.
The control system in either case, should provide absolutely free, but besluttede move. Handlebars must deviate by an angle of about 30-35° symmetrically on both sides. Alignment of complete models must be in the range of 40-50 mm from the leading edge to “plane” and about 45 mm for a “flying wing”. The exact position of the center of gravity is able to easily pick up if I serverlimit holes in Motorama under the screws on the engine. Moving the motor forward or backward to find the required position and then carry out of the hole. If necessary, excess motor can be removed by filing.
Both bouzouki turned out to be surprisingly lightweight and extremely durable. Even with weak engines, they are pretty speedy, satisfactory maneuverability, allowing safely recommend them not only at the beginning of training athletes, but also for the first sports “battles.” Three-year practice of building and operating such models have shown that they are a great “party favor” in this class, popular miniature aircraft.
The availability of the materials and delivered “on stream” manufacturer help in the short term to build a large number of models. Suffice it to say that in one night in camp the boys managed to collect 3-4 bouzouki, to acquire the basic skills and maneuvers to try their hand in the “battle”!
I. TITOV
The comment of the expert
When using the proposed bouzouki powerful engines of the KMD uprated with specially selected propellers the speed models may be very large. To ensure reliable behavior of vehicles in maneuvers in such modes (and all other), it is useful to transfer cargo zakonopacheny the outer ends of the wings into the zone of the front edges. The fact that the rapid rotation of models for the angle of attack begin to affect the influence of the moments of inertia of the device along different axes. In this case, the rotation will be most likely along the axis connecting the center of gravity of the whole model with balance weight. If you carefully understand the details, it will become clear: if the cargo is worth about spar, a possible way out of bouzouki of maneuver in the direction of “in the circle”. What will not be at the front location of the cargo.
V. TIKHOMIROV, master of sports