Rocket class S4, on the construction which I want to tell the readers of the journal “modelist-Konstruktor”, was designed and built in 1989, but until today Dnipropetrovsk athletes on such models achieve quite decent results in competitions of any rank up to the world and European Championships.
Rocket — classical design, with rotary wing and hinged on the passive portion of the flight ears consoles. Fuselage beam model is formed on a tapered steel mandrel with a length of 515 mm (smaller diameter 3 mm, more — 8 mm) from three layers of fiberglass with a thickness of 0.025 mm and one layer of carbon fabric with a thickness of 0.14 mm by using as a binder resin Larit-285.
After machining, the beam is coated with varnish, polished, and then subjected to heat normalization — aged one hour at a temperature of 85°C and then for five minutes at 110°C. Such treatment reduces subsequently the negative effects of high-temperature gas jet in the active phase of the flight the fuselage on the beam arising from its non-uniform heating (as a result of this warming appears torque about the longitudinal axis, which can flatten the tail to the carrier plane at an angle up to 15°).
Mass cut and otortsovannuju length 485 mm fuselage beams 2,3—2,5 g. At a distance of 145 mm from the leading edge of the beam is glued in the balsa liner to enhance the attachment of the wing and the front fairing of the beam. Further quick-drying glue fixed keel, a platform for the pylon of the wing and the stabilizer. By the way, the site will form a reference plane when assembling rocketmodel.
To reduce sliding friction in the pad and pylon wing hit three celluloid plates, as shown in the figure. On the side of the platform is cut out the hole and it amalite recorded on celluloid
insert serving as a stop for the unfolding of the wing.
In the area of the GSI drill hole of 2 mm diameter perpendicular to the axis of the beam and affixed the axis of rotation of the wing—stud, both sides of which is threaded M2: on the one hand at a length of 4 mm under fasteners of wing, and with another— on length 7 mm — to enhance the adhesive joint between the axle and the liner inside the fuselage. After pre-Assembly of the fuselage all the joints of the spilled epoxy resin ED-22. To improve adhesive properties of the glue it adds up to 30 percent of tetrakis titanium or Zirconia. 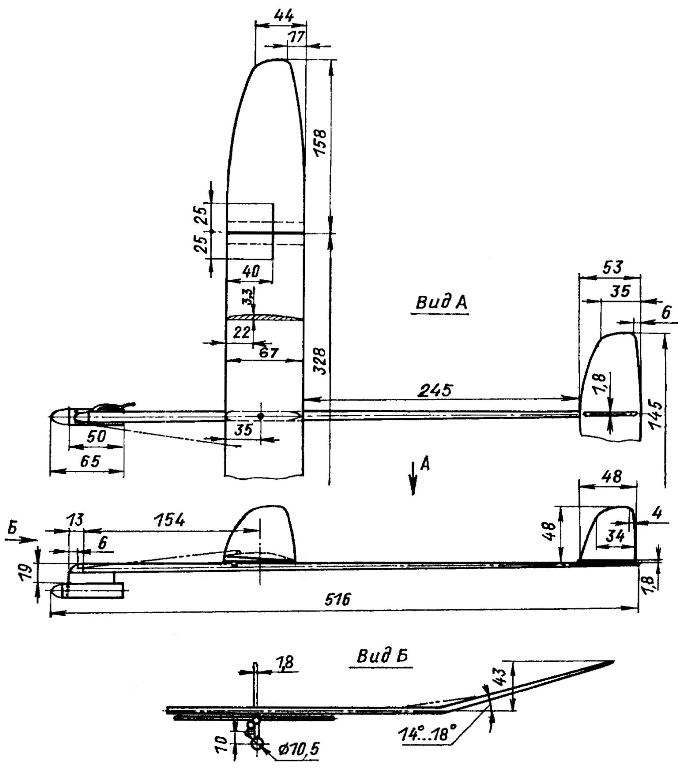 Geometry of the rocket plane.
In the fore part of the beam exactly perpendicular to the base plane of the fuselage is glued the pylon to the engine compartment. To the thrust vector of the engine was parallel to the base plane of the fuselage, the surface of the pylon, designed for coupling with the engine Bay, treated the hook that it was parallel to a reference plane. This Assembly technique provides improved accuracy of the installation the engine compartment when it is mounted on the model, since it is sufficient to provide only its orientation relative to the plane of symmetry of the model.
Wing, all the elements which made of grooved balsa plate with a thickness of 3.3 mm, consists of a center section and a pair of ear-consoles. On the consoles the ends of the profile thickness is reduced to 2,5 mm. Connecting plane of the consoles and center section are processed so that in the expanded position, provided the angle of 14°-18°. 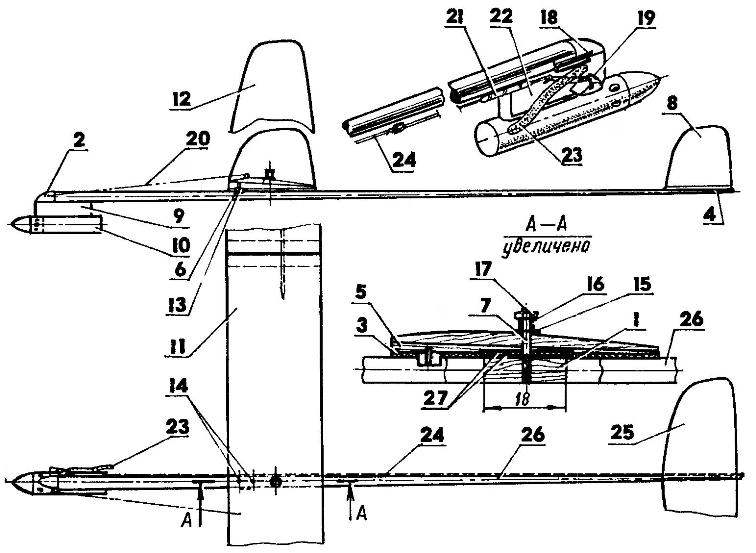 The design of the rocket:
1 — liner (balsa); 2 — fairing fuselage beams (balsa); 3 — the area under the pylon of the wing (balsa); 4 — area under the stabilizer (balsa); 5 — pylon wing (balsa); 6 — insert (celluloid); 7 — axis of rotation of the wing (D16T); 8 — keel (balsa); 9 — pole engine compartment (balsa); 10 — compartment motor (Linden); 11 — center section of the wing (balsa); 12 — console wing (balsa); 13 — locking hook (OBC d0,7…0,8); 14 — pins (bamboo); 15 — puck (celluloid); 16 — compensator (PTFE); 17 — nut M2; 18,19 — hooks avgo mage forced landing (OBC d0,7…0,8); 20 thread rubber; 21 —balancer; 22 — thermal protection (PCB); 23 wick; 24 — rubber shock absorber; 25 — stabilizer (balsa); 26 — fuselage; 27 plates (celluloid s0,5, 3 pieces).
To prevent bursting of the rubber thread designed for opening the wing, the balsa edges of the center section and consoles, their ends are glued celluloid overlays with a thickness of 0.5 mm. They also prevent the absorption of balsa moisture from the environment.
The console is mounted on the center section hinges from strips of nylon fabric. In enamel, containing these kind of joints, you need to add a few drops of a plasticizer (castor oil) that will protect them from breaks in multiple kinks.
The stabilizer and fin are machined from balsa plates with a thickness of 1,8 mm. the Profile of these flat elements, symmetrical, with rounded front and back edges.
The wing and tail feathers are cut from balsa with a density of 0.065— 0,080 g/cm3, the perimeter increase by two or three filaments of carbon fiber, fixed epoxy binders, which reduces the likelihood of breakdowns in crop mode kupirovaniya.
Finished the wing and tail are covered with one coat of varnish parquet with the subsequent processing of a skin. All other balsa items must have a density of 0.15—0.18 g/cm3.
Fairing of the engine compartment carved from basswood and lightweight from inside. On the axis of symmetry of the wing from the bottom, glued the pylon variable thickness, the shape in plan which corresponds to the basic area on the fuselage. The thickness of the pylon in the front edge of the center section is 3.5 mm, rear—0.3 mm, which ensures the installation angle of attack of the wing 2°40’. 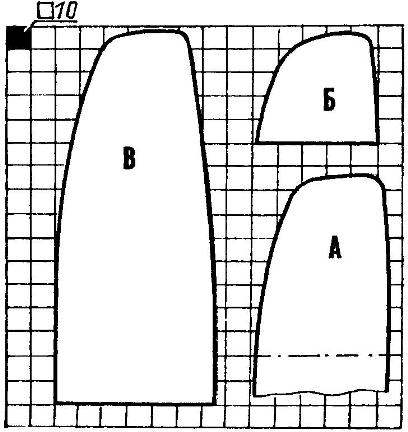 The stabilizer (A), Kiel (B), and the console of the wing (In).
At a distance of 7 mm from the leading edge is glued in the locking hook wire OVS diameter 0.7—0.8 mm. Considering that at the time of disclosure of the wing will have shock loads on the pylon, it is intensified by two bamboo pegs, fixed in the center section with epoxy glue. All hooks for attaching them to the rubber threads of the opening and the turn of the wing is made of wire, allied with a diameter of 0.5—0.6 mm.
Further, the center pylon of the wing, perpendicular to its lower surface, drilled 2 mm hole. Then the wing is installed on the axis (in planning), which fits missed Amalita celluloid washer and Teflon compensator, and then the entire package is tightened with a M2 nut until it is tight pylon wing of the court, and in such position it is left until the glue dries.
Automatic forced landing— wick, it consists of a pair of hooks of the mount rubber, balancer, textolite thermal protection and wick. The essence of his work lies in the fact that when pareige retaining bracket thread the rubber isolator converts the rocker for dimensions of the model, resulting in model rocket glider goes into kupirovaniya. The attachment of the wick shown in the figure.
If the model is prepared for the start of the wing is bent under the center section and is rotated counter-clockwise by 90°. Then nylon thread pounces on the hook for the wing pivot, the free ends are passed through the drainage holes of the engine compartment and fastened from the opposite side.
The model starts from the gas-dynamic setup. Its starting weight with the engine In-2-3 design of Yuri Gapon is 29 g. the Weight of the empty rocket is 18.5—20 g. the Specific load on the wing in planning mode about 5.3 g/dm2.
I. VOLKANOV, Dnepropetrovsk