None of the types of modeling to the apparatus is not presented at the same time so many conflicting claims as to RC jumper gliders. Imagine that you need to design a machine that combines the properties of high-speed models, gliders-paritala and apparatus created specifically for ustanovlena of records range.
However, modelers safely solve such problems.
Long gone are the days when the competition marshalling of gliders could be seen only the usual RC priteli now hope to succeed with this model no. The modern representative of the class F3В — universal embodied experience of the creative search of many athletes. Its differences — speed and high aerodynamic efficiency, the ability to fly safely in strong wind and feel the weakest ascending thermal streams, gaining precious extra metres of altitude. The growing popularity of motocross class gliders is not only the widest possibilities of design search — there is another important factor. Gliders do not have the enormous overloads and vibrations as the motor model means, and the equipment can be used not so high-class and more available to the average athlete.
So, jumper RC glider-wagon. The number one issue for this kind of model — profile for the bearing surfaces. Recently, krossovki bolder refuse to use the well bearing profiles with strongly arched in the middle line. They came pretty thick, lenticular, which not only provides the high stiffness of the wings of the velocity model, but also excellent dynamic performance of the flight, its range. Modern means of towing (winch, petrol or electric) help to “highs” in the first of three exercises — for the duration of the flight — even in the absence of the ascending thermal streams. When performing other exercises that range and speed requirements to the supporting profile properties fade into the background. It is more important than minimal aerodynamic drag at angles of attack close to zero (more precisely, with insignificant coefficients of the lift force), which can not provide the supporting concave-convex profiles.
Most of the current models of class F3В have profiles calculated from known West German aerodynamicist Epplerom with the help of computing machines. The calculation was performed on the “model” Reynolds numbers, experiments in aerodynamic low-speed tubes showed high convergence of analytical and measured performance.
Modelers have great confidence in these profiles with the index E. the Only drawback (as, indeed, all such, laminarizing) — extremely high demands on the accuracy of the shape of the entire arch, until the tail knife-like part. However, modern technology is making wings with a completely rigid covering allows you to cope with this case. The use of such profiles on the finished glider with the consoles having at least partially the soft parts, is impractical. 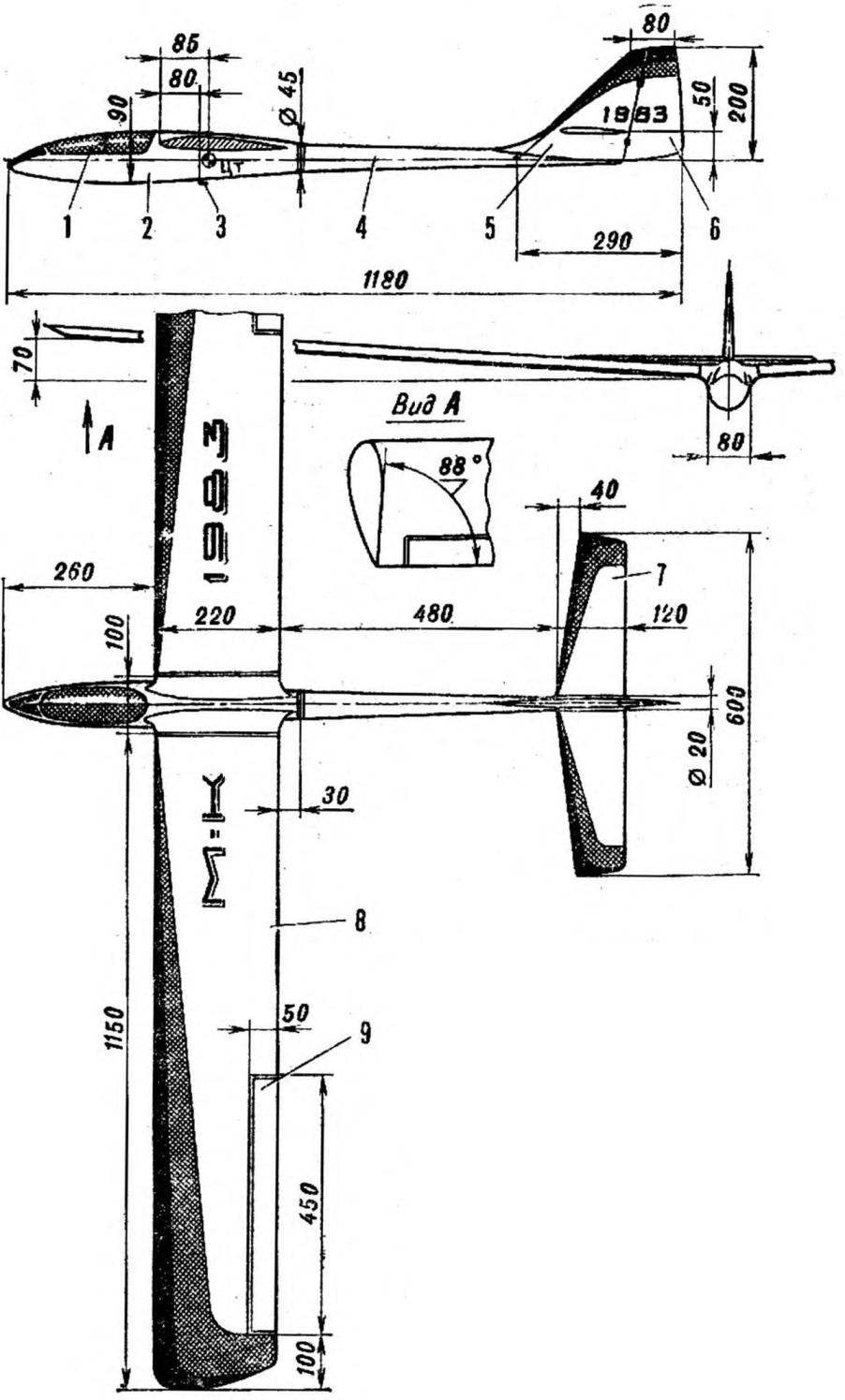 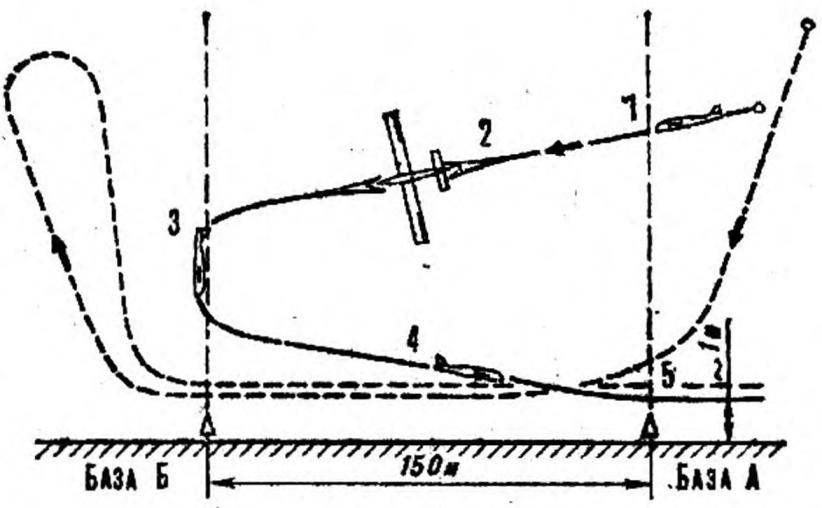 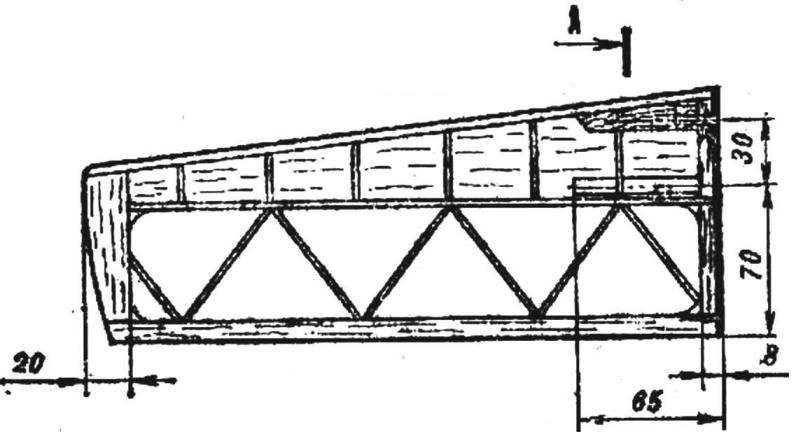 A TABLE OF THE COORDINATES OF THE PROFILE
It should be noted that the fuselages, produced by the new technique of two separate parts, well established n in operation.
The design of the tail is clear from the drawing. The only thing I would like to advise save every gram. Easy the tail of the device is the key to its good controllability and stability.
Ready-made model elements have the following mass: wing (both consoles) — 680 g fuselage keel without instruments — 240 g, the stabilizer with pins — 40 For the equipment there are more than 600 g, it means that you can use and improvised.
During debugging control system, verify that all the controls are easy to move, whether there is no backlash in the joints of tie rods with the control horns and the coupling of the drive of the ailerons. All-moving stabilizer should deviate by 10° in both directions, rudder — 20-25°. Last mated with the ailerons deflecting up and down at different angles (+24°, -15°), which is achieved by forward tilt of the pylon, located in the center section.
Stabilizer exhibited with zero angle of attack relative to the axis of the model, only when performing the first exercise, he lowered the trim tabs at — 1°. Folding canopy-brake opens at 35°, and large angles cause the appearance of the pitching moment. But at these values, the inhibition model is very effective.
In conclusion, I would like to acquaint modelers with interesting methods of exercise “speed” As shown by calculations and confirmed in practice, spectacular dive Vered entrance on the measuring distance for acceleration of a glider, flying at a low altitude on the horizon with the subsequent attack and combat u-turn to reverse course contain a lot of elements on which a significant portion of the potential energy accumulated at the start, lost is meaningless. This is especially true of reversal: perform it related to the growth of aerodynamic resistance of the model. 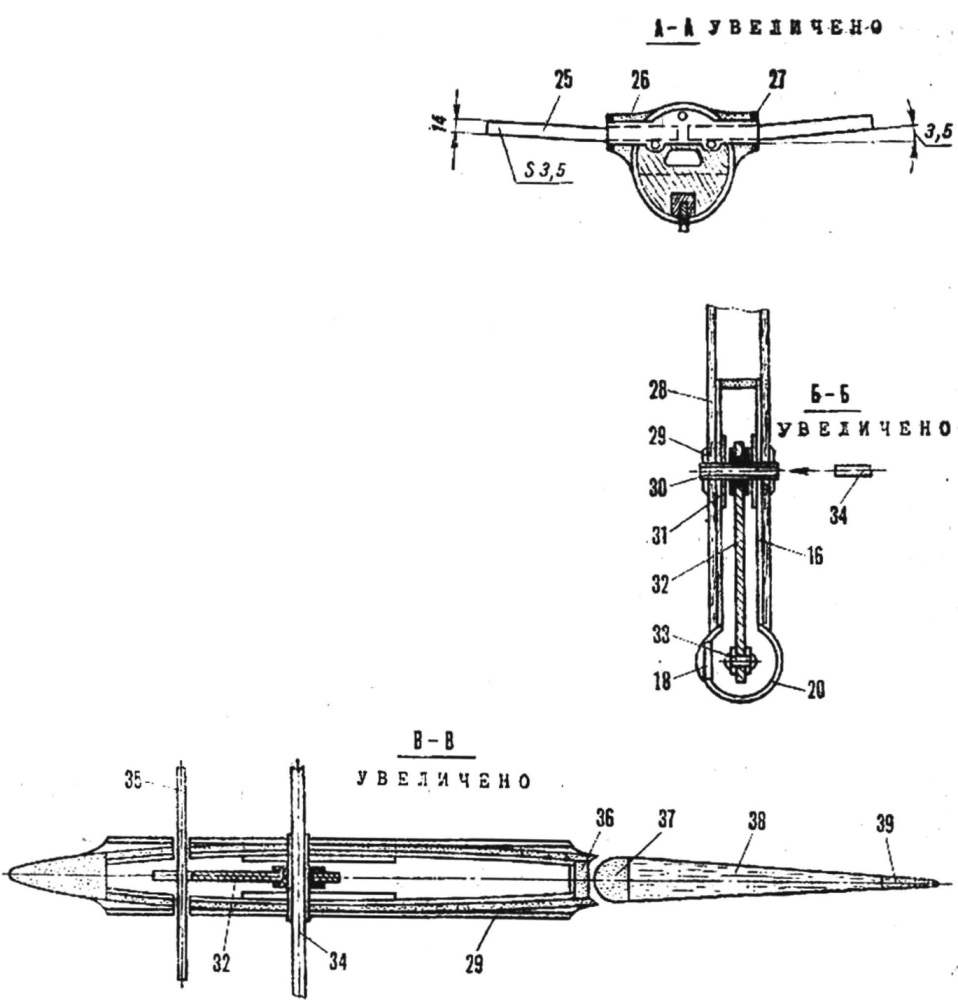