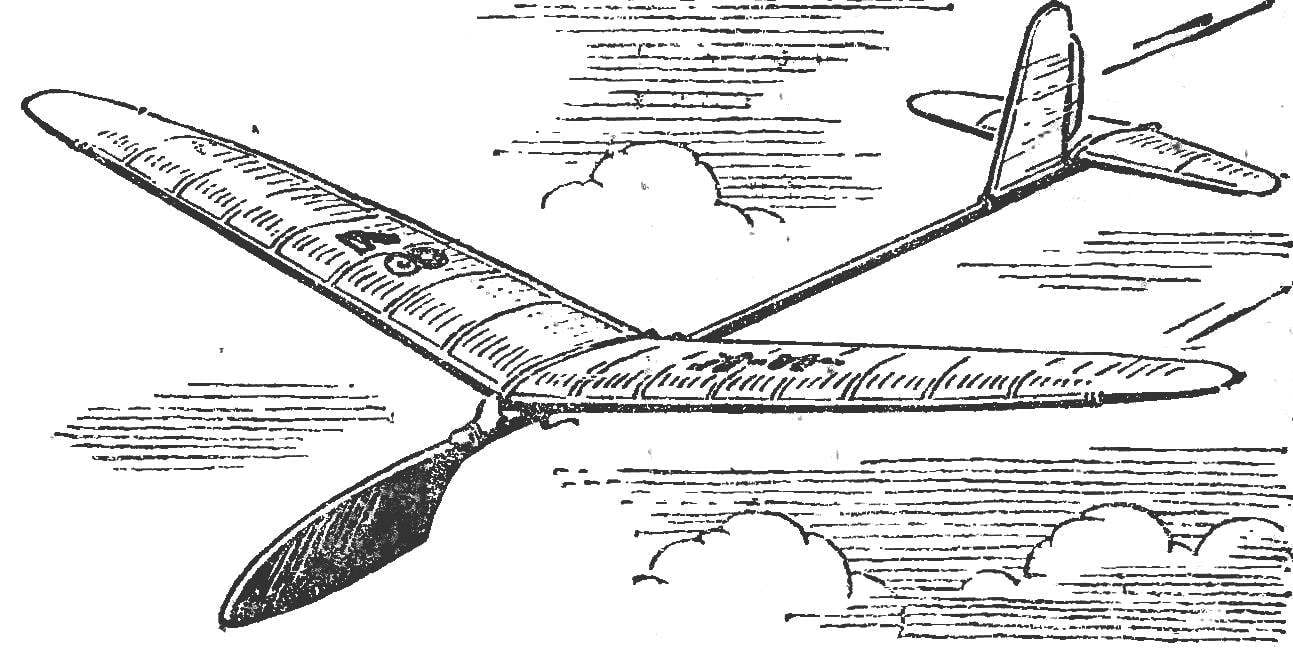 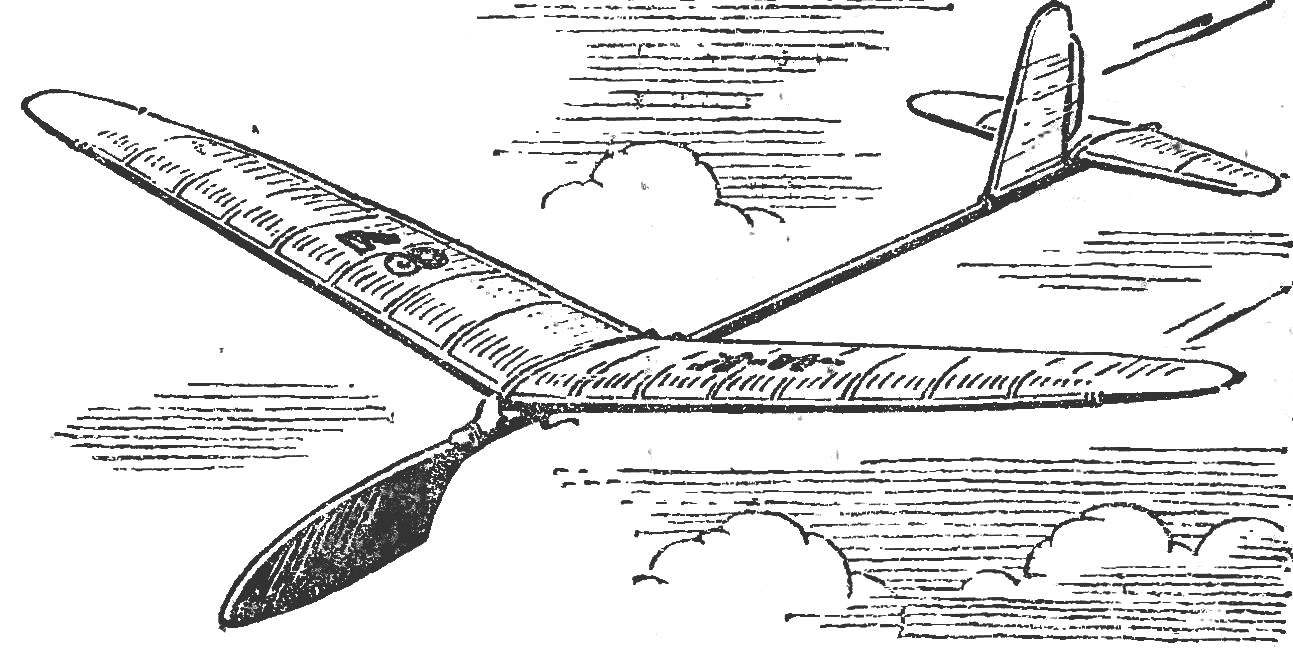 Elegant appearance, ease of fabrication, lack in construction materials in short supply, good flight characteristics are qualities that distinguish a schematic model of the airframe designed in the laboratory of aviation technology rut of Kazakhstan. Such models young Almaty residents repeatedly became winners of various competitions. Maximum results in all rounds is not uncommon when using the proposed “schematicity”. And flight characteristics of the glider was so high that it had to be equipped with a matchlock device forced landing. Without it, many models disappeared in terms.
Building a “little schematicity” begins with the wing. First of all billet bent edges (front edge only on V, the posterior for V and a narrowing of the end sections of the wing) with a specially made fixture. Before laying in a pine slats locations of future “fractures” moistened. To speed up drying, all heated on a hotplate.
Rubber-band attachment on the fuselage and hook for attachment of a wick device. An important task facing the young athletes at these stages, to achieve the minimum weight of Kai stabilizer and fin. 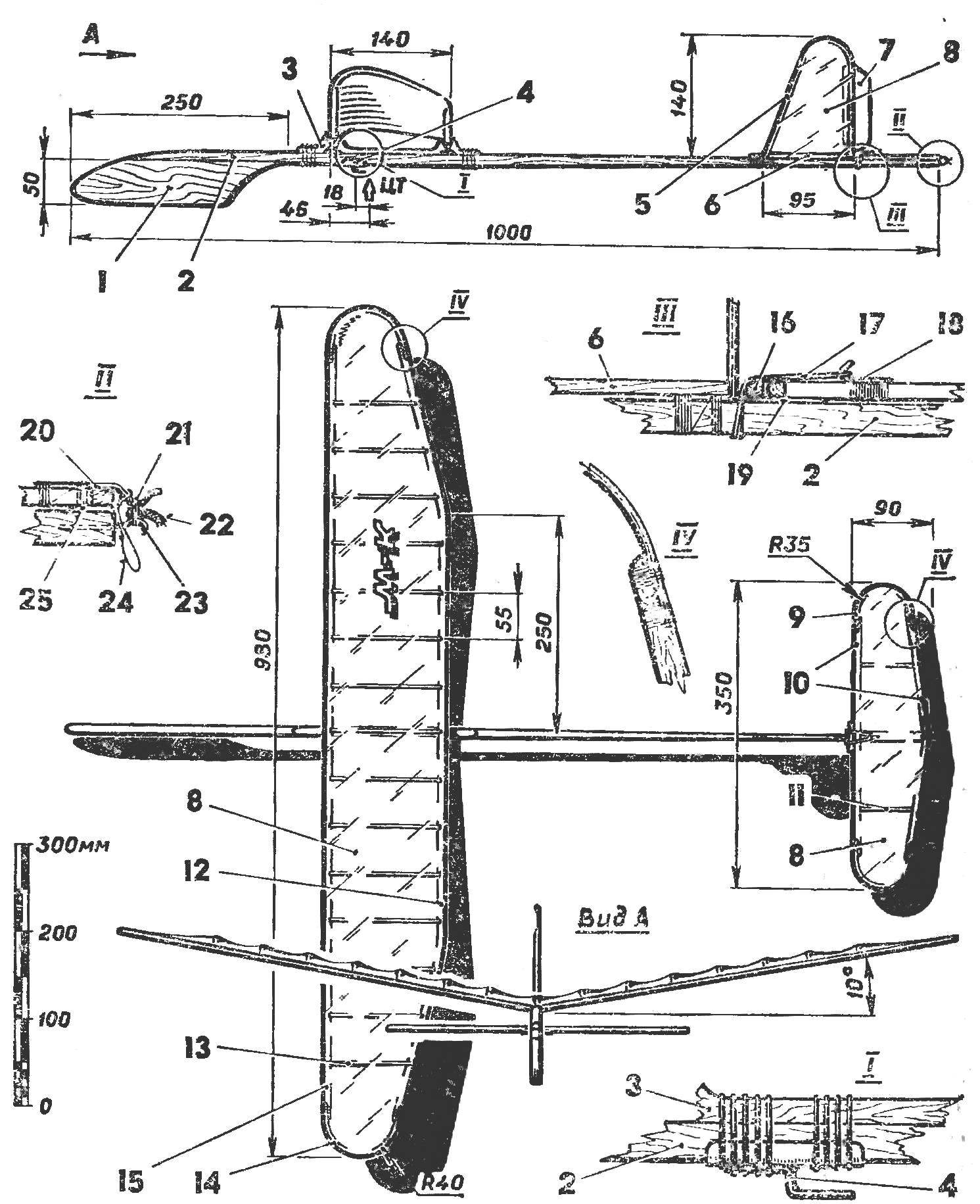 R and S. 2. Outlines of pole and rib:
Tow hook — cut with a hot wire d 1.5 mm. It is soldered to the tin plate, bent lengthwise in the form of a small channel (on the fuselage rail).

Fig. 3. Recessed sableye for bending the edges:
And bending the front edge,B is the bending of trailing edges.
Ready wings, stabilizer and fin are upholstered in transparent or colored Mylar film with a thickness of 0.02 mm CA glue BF-6. “Weld” of the film to the frame is conveniently performed by means of an electrosoldering iron with a power of 50 W, bluenose for a voltage of 150 V. the tip is useful to wear dural nozzle with a diameter of about 40 mm. the accessory will allow you to warm up the trim to get a good tension of the film. The keel is covered on both sides, after which it glued a cardboard rudder.
At all stages of the Assembly need to ensure that there are no distortions of the consoles of the wing and rudder. Ready “themagicke” balance. The center of gravity of the glider should be at 1/3 of the Central chord of the wing. If necessary, the nose of the fuselage DeGroat pieces of lead.

Fig.4. Device for bending workpieces ribs.
After alignment of the airframe with rubber bands (the same holds the wing pylon) to the fuselage privinchivayut and tow hook. It should be located at a distance of 18 mm in front of the center of gravity.
If, when debugging the flight is found that the model exhibits a tendency to nose dive under the rear edge of the stabilizer it is necessary to place a piece of veneer. When you pitch up (after starting the model nose up) the same way lifted front nrama. Final balancing is completed when a glider will “learn” steadily and smoothly to plan.
S, GLADKOV, head of the laboratory.