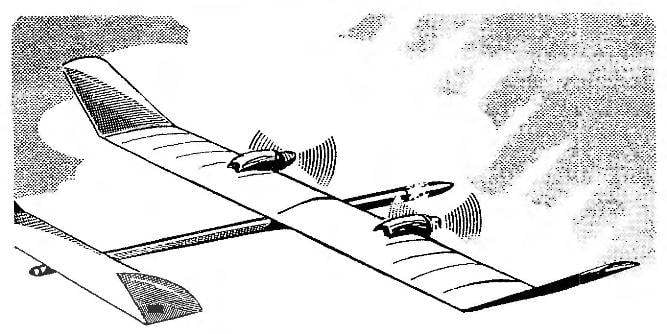 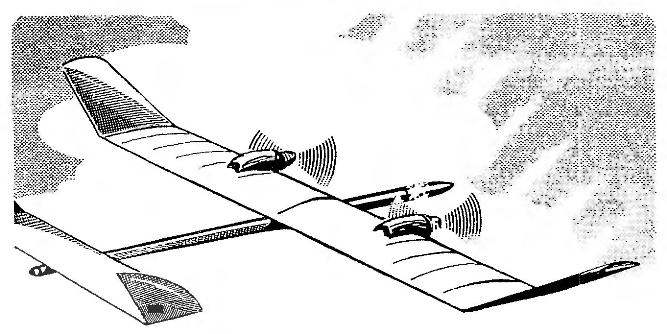 Electrics have had a steady popularity among modelers, but she sometimes wears some kind of theoretical. It seems that many believe the making of “trains” is inconceivable without supernatural and superaccumulation. Meanwhile, a relatively simple Svobodnaya electrics with the most common DC motors-5-19 and is powered by standard AA batteries or rechargeable batteries can be done in any model circle or even at home.

Proposed drawings and description of a simple elektroleta, which is a twin-engine high-wing monoplane with a wing of large aspect ratio and the square twin fins and cone beam-fuselage. The model differs little from gliders by weight, geometrical and aerodynamic parameters and is able to make a long motor and gliding flights.
WING elektroleta — stacked design with a covering of Mylar film. Consists of center section and a pair of “ears”consoles. Going on the Board-stocks, on which is fixed is made in 1:1 scale drawing of the planned projection of the wing. After this, the stocks is delayed with plastic wrap so that it is not stuck to a set of the wing when you build it.
To start on the slipway for a distance of 110 mm are fixed two racks, and using them increases the accuracy of Assembly. Next, with pins fixed front and rear edge of the wing, then epoxy mounted rib. It is only necessary to note that the end rib of the center section and consoles are fixed root not perpendicular to the slipway as the others, but at an angle 151 degrees — when docking the center console and the corner of the “V” of the latter will be the required 30 degrees. And another condition: the eight ribs of the center section have the holes for the cables connecting the battery pack and motors, and installation of these wires needs to be completed prior to covering the wing Mylar film. 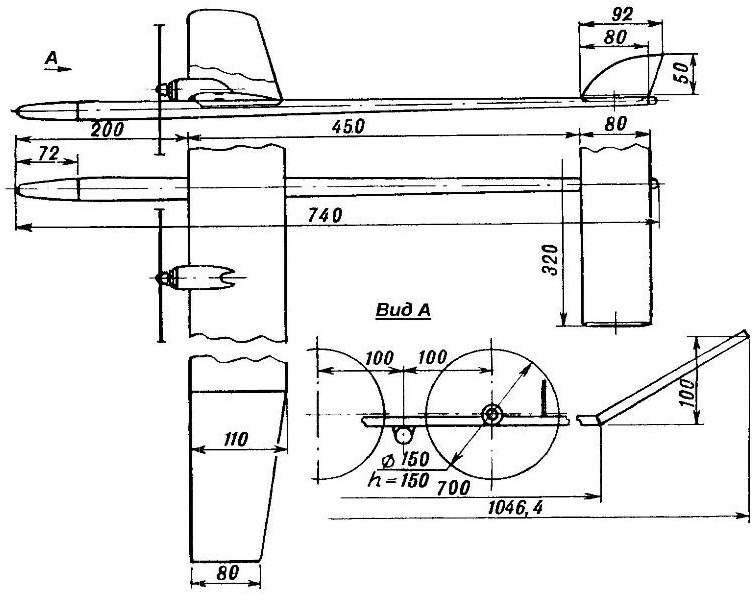 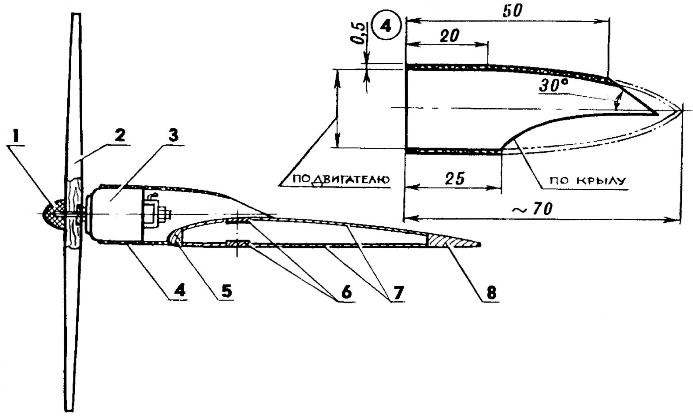 Horizontal tail elektroleta:
1 — rib end (balsa rail 8×6); 2 – edge of the front (lime, rake 6×5); 3 — rib (balsa s1,5); 4 — shelf spar (balsa rail 6×2); 5 – flange rear (Lina, rack 6×3); 6 — solitaire (balsa); 7 — a lining (balsa , s1).
After polymerization of the glue on the wing are installed to the beam flange and the so-called cladding 1 mm balsa in the middle of the wing and the location of the engines.
Thus prepared the center section and “ears”-the console is removed from the pile, are stripped off and butt-glued with epoxy. The wing is fitted by a thin Mylar film using glue BF-6.
NACELLES are moulded from thin fiberglass and epoxy on a wooden disc, a cylindrical portion of which must correspond to the diameter of the engine (DK-5-19 about 20 mm). Before forming the blank “bandaged” thin plastic tape that can be easily remove you the adhesive after polymerization of the binder. Ready skurida sheath, trimmed in accordance with the drawings and glued with epoxy to the wing. Previously in the gluing zone with the cladding on the wing cut Mylar film.
The HORIZONTAL TAIL has the shape of a flat plate with a rounded front and pointed rear edges. It is going exactly the same way as a wing — Board-stocks. The Central zone of the stabilizer is covered with 1 mm balsa. Cording — thin Mylar film on glue BF-6.
KEELEY also matched to the stabilizer each of them is secured by bolts M2, which in the root rib are glued Kiley nut M2. This design allows you to choose the position of the keel which provides for the desired flight trajectory.
BEAM the FUSELAGE is one of the most critical components of the model. In principle, there are many structures which allow to obtain satisfactory strength and weight parameters of this node. In particular, can be applied to the wall I-beam balsa plates in the form of a quadrangular truncated pyramid, you can do it from the foam blanks with a triangular cross-section sealed at the edges of I-beam spars of pine slats; you can finally just planed it from the balsa slats.
It also proposed a tapered fuselage-monocoque laminated of fiberglass and epoxy resin. For vyklicky need conical wooden disc, carved in accordance with the internal dimensions of the shell. It should be noted that the length of the bar shall exceed the length of the fuselage beams of 15— 20 mm at both the front and rear. The finished blank is carefully bandaged with a strip cut from a plastic film and glued two or three layers of fiberglass so that the total thickness of veclachi did not exceed 0.5 mm. Further, Vileika is wrapped with polyethylene film and bandaged tightly with a rubber band. And finally, the remaining “tails” attached durable fiberglass twine, and the disc is suspended by the upper “tail” of the hood, while its lower “tail” binds cargo, such as weight weighing 24-32 kg or even a bag of sand.
The next day the shell is separated from the blanks, and it is glued molded out of fiberglass or paper and epoxy resin are cylindrical insert designed to mate with the fuselage front fairing. In the rear part of the beam is glued in the balsa plug. Front fairing wikiepedia exactly the same as the beam or the nacelle. 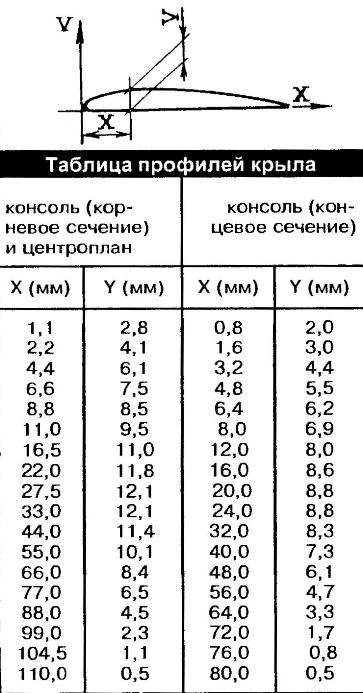 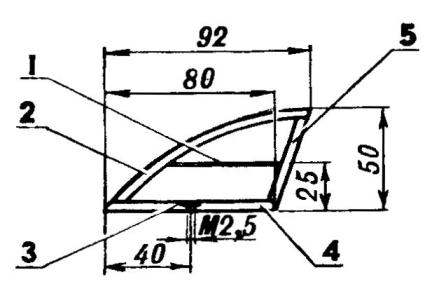 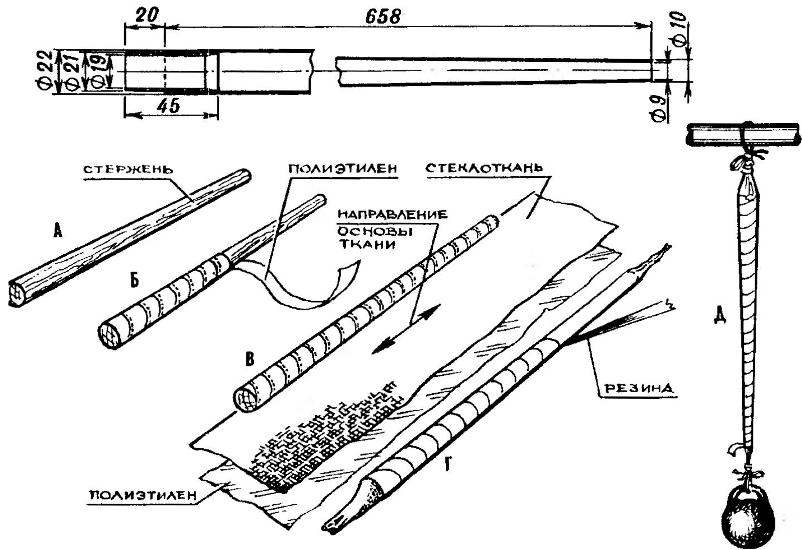 The nose part of the model with battery case:
1,6,8 plate pin (brass band 6×0,5); 2 springs (wire OVS d0.5): 3 – fuselage fairing, front: 4 – batteries or rechargeable batteries; 5 — fuselage; 7 pencil box (Vileika of epoxy resin and fiberglass).
The BATTERY CANISTER is a fiberglass cylinder with an inner diameter of 16 mm; the middle cylinder is fixed to the Central contact of the brass strips with a cross-section 6×0,5 mm, the same strips are fixed two pairs of batteries inserted in the cylinder. For more reliable contact under the spring strips are introduced from provoloki type of OVS with a diameter of 0.5 mm. Connecting elements is series-parallel, which connected in parallel two pairs of series-connected batteries. In the Central part of the wing (on the lining) must be set microtubles or homemade mini-switch.
The PROPELLERS have a diameter of 150 mm at a step of 150 mm. to Make them better all of the lime on the type of those installed in high-speed cord models.
The wing and stabilizer on the fuselage are attached with rubber bands.
To do this, in the area of the stabilizer and wing to the beam glued the balsa insert, forming a connecting platform. However, with the gluing of the front docking area should wait, choose the first experimentally uncoupled model.
This operation is performed when the trial runs on schedule while the power is off. Moving the wing along the fuselage beams, changing the angle of its installation, and the installation angle of the stabilizer, you should make sure the flight model. You can then glue the connecting pad under the wing so that the position and installation angle of the wing fit obtained experimentally.
Adjustment of the electric motor in flight is to trim the blades of the propellers with model tests after each pruning in motor mode. After reaching the optimum thrust of the blade it is desirable to balance, Polish and coating parquet varnish.
Launches should be taken into account that the duration of the flight motor when using rechargeable batteries or Alkaline batteries can be quite large, so care should be taken to install a simple timer, for example, wick-type, disconnect the power to the engines.
I. NISTRATOV