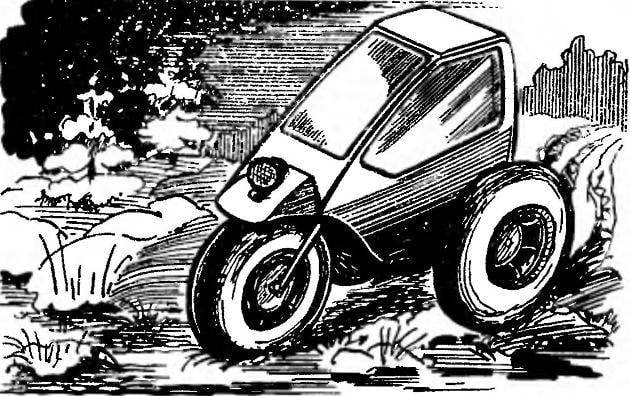 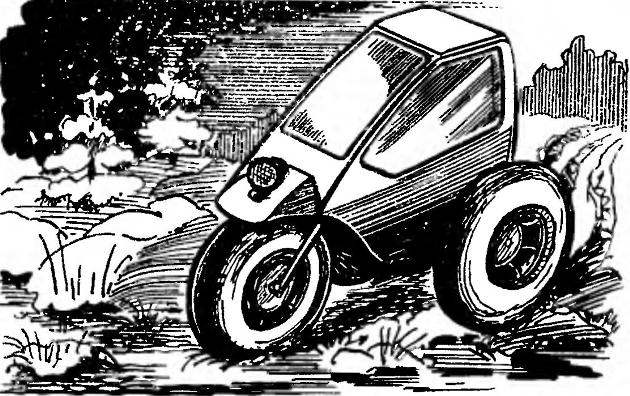 ATVs on tires of low pressure are becoming more comfortable. If ten years ago, enthusiasts of all-terrain vehicles created mainly of three-, four – and six-wheeled vehicle, devoid of even a hint of the cockpit, today Amateur designers send in edition the pictures they made on their ATVs with a comfortable and warm cabins designed for long journeys in conditions of low temperatures. Here is one of such machines is a comfortable tricycle “Mini-200”.

The power unit of the tricycle pneumatic TG-200M — scooter cargo “the Ant”. As experience shows, this is one of the most reliable among domestic two-stroke engines, with the starter and forced air cooling. The transmission of torque from the engine to the wheels through tolocirio circuit for a reverse gear (main gear from motorized FDD), and then through the drive shafts to the wheels.
All-wheel tricycle brake, which each of them is equipped with a brake drum of a motorcycle “Minsk”. The front wheel is slightly less rear — their diameters are respectively equal to 750 mm and 870 mm in an inflated state.
Rover spatial frame, tubular, all its elements are connected with carbon dioxide, the dugo model welding machine. Rear axle is a farm consisting of three tubes welded to the frame. All joints are reinforced with gussets made of sheet steel.
The engine is mounted on the frame front and the bottom docking ports. To mount them, it’s best to first consolidate those nodes on the engine, then using clamps and mild steel or copper wire with maximum precision to fix the engine on the frame, and grab the nodes by welding, and then finally weld them to the frame after dismantling of the engine. Similarly, attach the nodes of the main transmission. 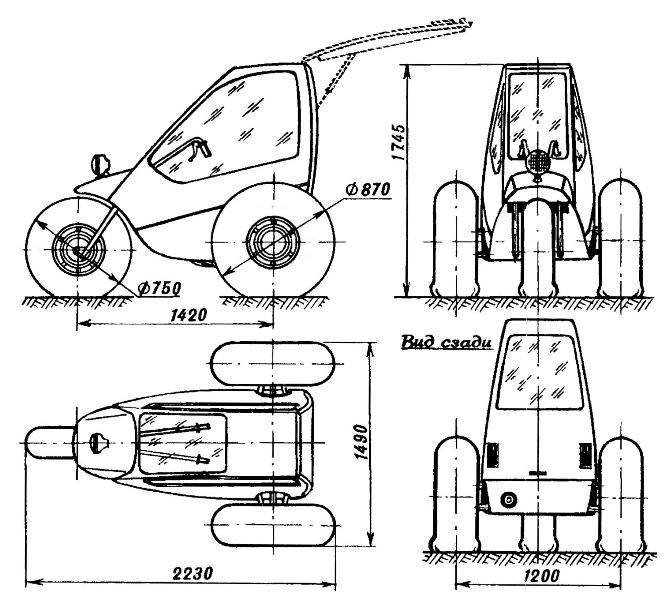 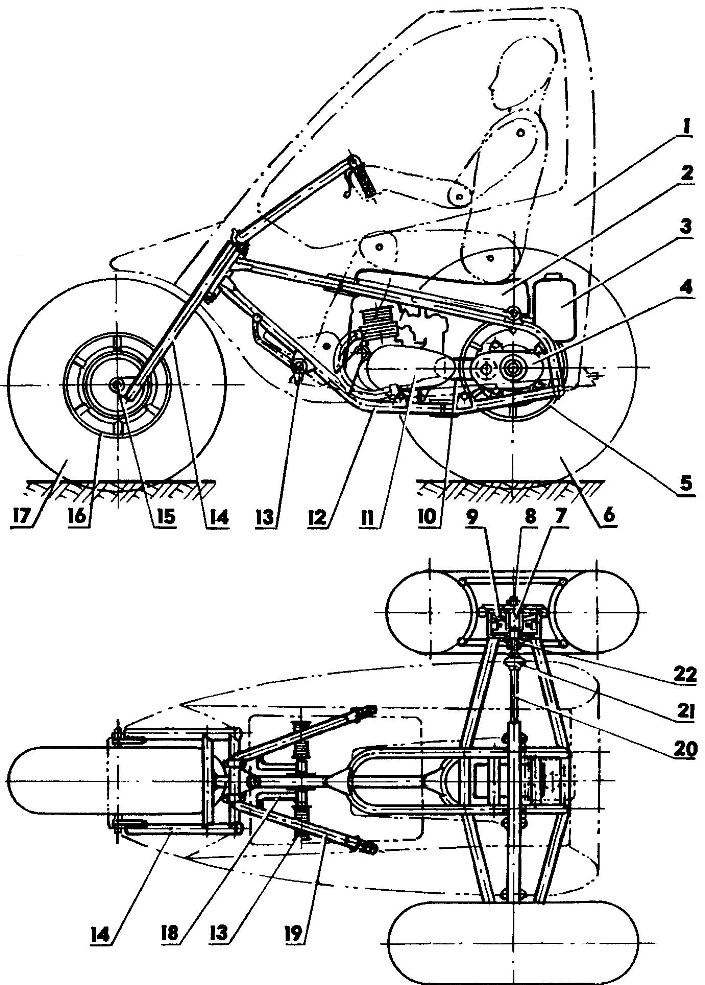 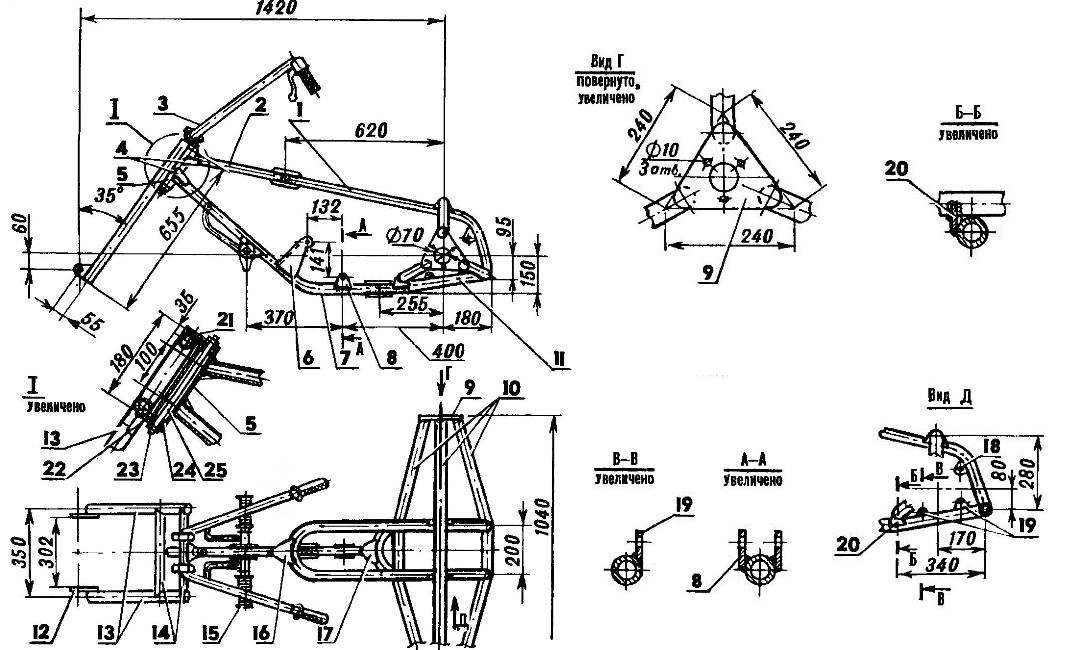 Frame:
1 — upper fork (steel, pipe 30×2); 2 — a tube top (steel, pipe 30×2); 3 — wheel (steel, pipe 22×2); 4 — gusset plate (steel, sheet s2); 5 — steering column (steel, pipe 32×2,5); 6 — node engine mounts, front (steel, sheet s3); 7 — lower pipe (steel pipe 30×2); 8 — node engine mounts, rear (steel, sheet s3); 9 — flange (steel, sheet s3); 10 — cross the farm back of the bridge (steel, pipe 30×2); 11 — fork bottom (steel, pipe 30×2); 12—Klondike (steel, sheet s4); 13 — the feathers of the front fork (steel, pipe 40×2,5); 14 — cross front fork (steel, pipe 32×2,5); 15 — step; 16,17 of the gusset plate (steel, sheet s2); 18,19 — attachment fittings main gear (steel, sheet s3); 20 — solitaire reinforcing (steel, sheet s3); 21,22 — lugs (steel, sheet s3); 23 — nut M12; 24 — bushing (bronze or PCB); 25 — pin M12
Front fork is welded from two tubular pens and two jumpers. In its design, in principle, you can use the feathers from the telescopic fork of any suitable motorcycle, but cars with tires with very low pressure can well do without prinovozemelsky shock absorbers. At the bottom of the feathers of the gusset plate are welded from 4 mm steel plates — it is attached to the axis of the front wheel. To connect the plug frame is provided with two lugs, is fixed by welding on the strut fork.
Saddle terrain vehicle homemade motorcycle type. It is collected from a plywood base, aggregate (hard foam) and a covering (artificial leather).
Wheel tricycle light weight, tubular, welded. Procurement of steel pipes with a diameter 18×2 mm bending by bending and assembled by welding. For Assembly you must use the simplest slipway for what is particle Board around the circumference of the wheel sets six racks of wooden bars are mounted on the prepared rim. After the control their alignment and parallel to each other to the rims prihvatyvayut welding the crossmember. If this operation has not caused appreciable leashes wheels, the cross member are welded to the rims completely. Also, in two installments, is set in place and the inner ring welded thereto lugs.
The holes in the lugs are drilled in place when installed on the wheel motor hub; it is necessary to achieve strict coaxiality of the hub and the wheel. For this first hub is fixed to the wheel using the clamp, and only after control alignment of these two parts are drilled bolt holes in the lugs on the inner ring of the wheel.
Pneumatics are quite securely held on the wheel of a tricycle and provide an acceptable coupling quality with snow and sand, arable land and swampy ground. However, in some cases to improve the patency of the vehicle can spin the tires a nylon rope or rubber straps.
Cabin — mixed design. The basis of it — the lightweight frame of steel tubes diameter 14×2 mm. the frame are mounted the frame glass, hinge single (rear) door, and three of the docking station, with which the body is attached to the frame.
In addition, the framework performs a formative function. One could, of course, sheathing it with plywood or hardboard, but the panel ruled surface (or, as they are called, panel of single curvature) significantly limit the appearance of the vehicle. Well, the most simple technology of manufacturing double-curvature panels in the conditions of self-production can be considered as forming the product of construction foam.
Before forming on a tubular frame, it is necessary to fix the light grid of 5-mm plywood, which specifies the form of future panels. The plates of the grid temporarily attached to the tubes mild steel wire. Then in a plywood “cells” on the epoxy glue foam blocks. After polymerization of the resin the excess of the mounting wire is removed, the body surface are processed according to the loop, if necessary, are covered by a layer of epoxy and immediately pasted one or two layers of fiberglass. 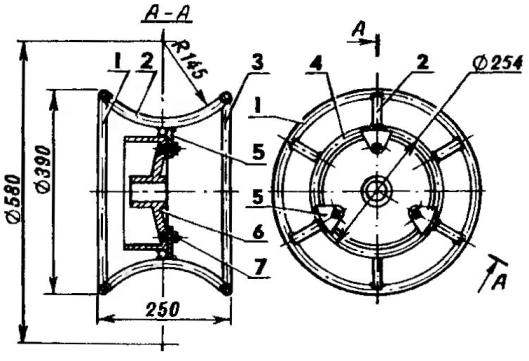 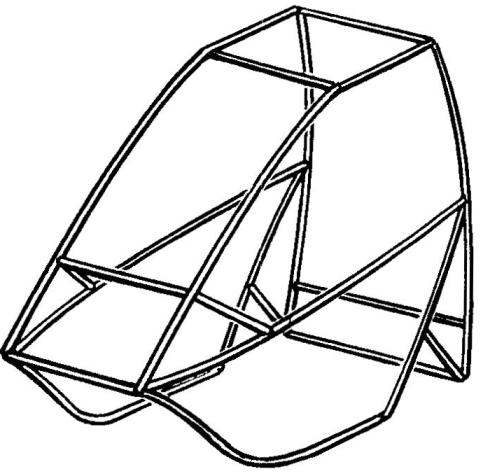 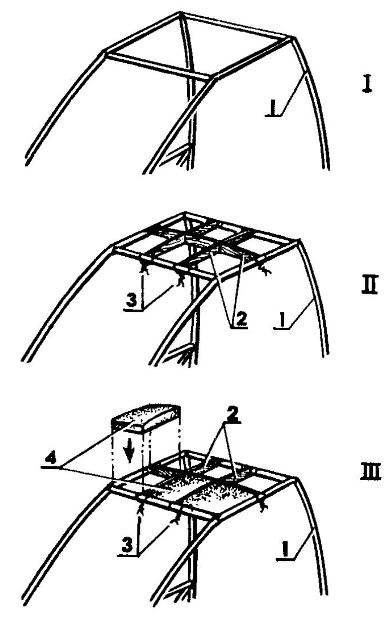 Forming panels of the cockpit (I,II,III—sequence of operations):
1 — frame cabins; 2 — “the grille” plywood; 3 — strand wire; 4—blocks of foam
The cabin has a single door — rear. One could, of course, to do it on the side, but to sit down on the motorcycle seat, stepping inside the cramped cabin through the frame, difficult. The back door allows you to climb into the cab fairly easy. The door also has a frame made of steel tubes and foam filling with subsequent coating of surfaces with fiberglass.
Side and rear cab Windows are cut from 4-mm plexiglass. Front glass — triplex, borrowed from standing in the junkyard of the broken bus. I must say that the selection of windshield determines the shape of the body, so it makes sense to start the design drawing, focusing on the shape and size of the existing glass.
Control system of vehicle — a motorcycle type. Handlebar mounted throttle, grip the front wheel brake (right) arm clutch release (left). The footrest is a pedal block; a pedal right — brake rear wheels, the left switch for the transmission.
Brake system cable, with a levelling mechanism for brakes of the rear wheels. With the help of cables in budenovskoy shell work drives the throttle of the carburettor, gearbox and clutch mechanism.
Fuel tank tricycle is a 4.5 litre plastic containers are equipped with a standard motorcycle valve-settling tank and is fixed to the rear part of the frame.
The equipment is the same as malogruzovaja “Ant”. Lights shows the rear “dimensions” in the block with brake light and motorcycle headlight installed on the front mud flap.
I. GALKIN, engineer