Avtomodelistov riders as it is not accepted to give the models names. Perhaps that is why the first thing we asked the author of this has no similar model, the origin of its name — “Vyatka”. Instead of a response, the designer withdrew from subtle glass-plastic fairing. It was very similar in layout to those produced many years of domestic scooter VP-150 Vyatka: console attached to the engine block the rear wheels, the engine — side of the longitudinal axis.
It seems to us, takal scheme will interest all categories of avtomodelistov — from beginner to veteran. First, it brings the relative ease of fabrication and achieve good results even without forcing the engine, and experienced athletes are the highest speed when using uprated engines.
The need for this car came to us, when carefully save for beginners sets “Temp” to the end were used and worked. I wanted to construct as simple available for beginners and at the same time, more modern racing car, rather than the well-known “Temp”.
Said from the beginning that the model will be without gear. And it’s not even that the self-similar circle not to make. In the end, you can pick up the finished gear from the old machinery or apparatus. Case in substantial losses while transmitting power through a universal joint and gear pair.
the decision in this case — console to secure the wheels on the crankshaft of the engine. Thought, considered. Unfortunately, I realized that the load on the crankshaft bearings of the motor will significantly exceed the allowable.
And if you wear on the motor shaft Cup-flywheel? And he wheels. Indeed, with this arrangement of the wheels, the layout started to take legitimate. 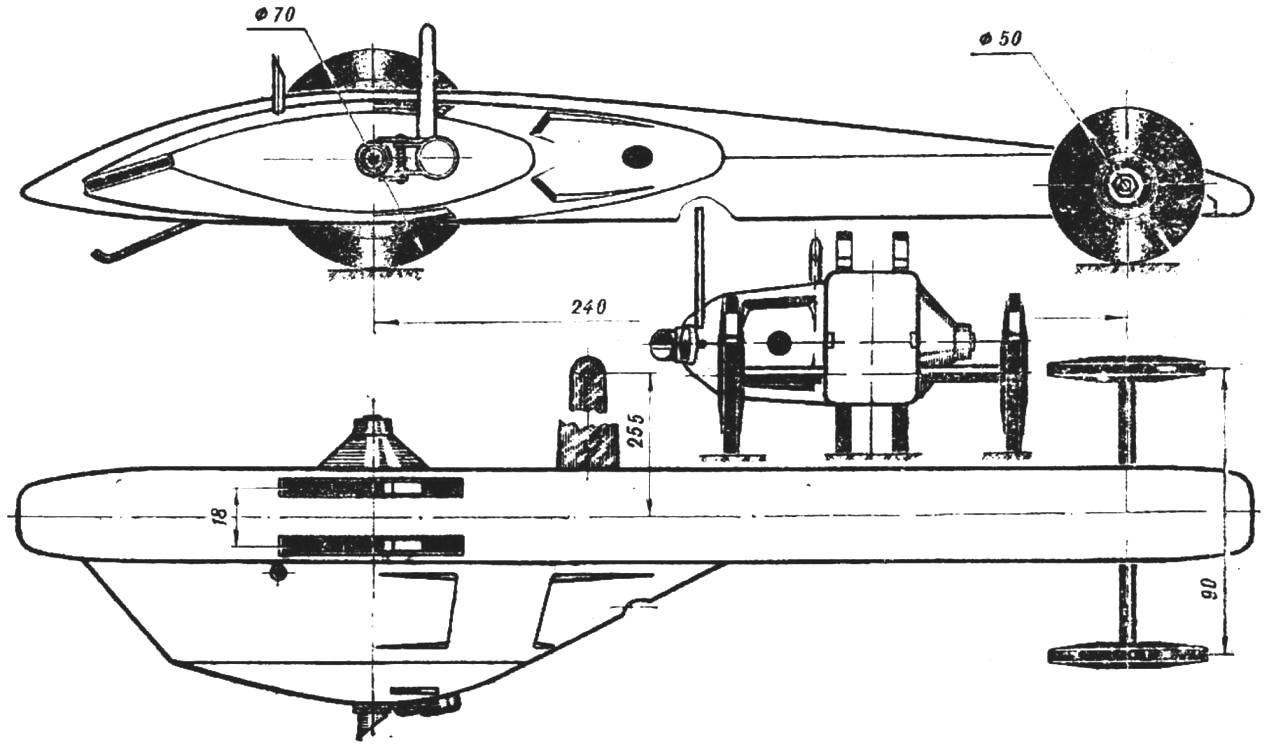 RACING CAR “VYATKA-2,5”.
The first drawing and the calculations showed that the load on the bearings steel is quite acceptable for the motor KMD-2,5. Midel “fuselage” has decreased in comparison with the “Tempo” and were comparable to how a large cross section championship racing car. Moreover, this arrangement “gave birth” to the flywheel — it is the function of solid steel hub, on which are fixed both wheels.
The greatest difficulties in implementing the scheme has caused a drawing of the motor. The debate around her would have lasted probably forever, but one day on my Desk was cut from plywood and glued in haste layout. Almost exactly what is shown in the drawing. The author designs wished to remain anonymous. We gratefully took advantage of the “anonymous” scheme. Engine mount made in accordance with it, is a simple, compact and durable. In addition, she made numerous upgrades “Vyatka”.
Thus, the power unit comprising the hub and the flywheel, two rubber wheels firmly planted on the hub and screw, engine mount and engine KMD-2,5, went high-tech and, if I may say so, functional. Indeed, only four parts: three turned and milled one. 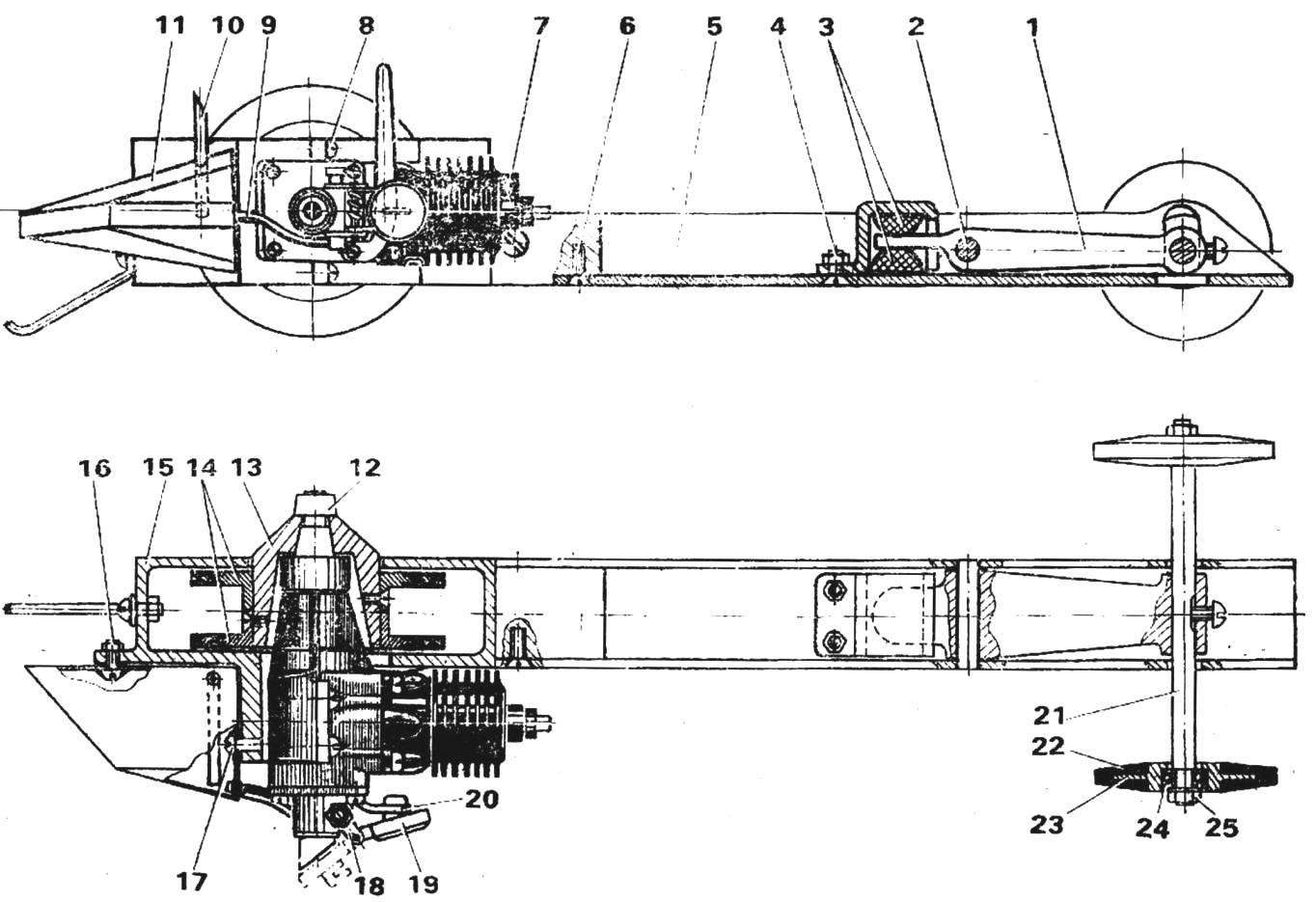 The layout of the car racing:
1 — rocking chair front suspension (D16T), 2 — axis front suspension, 3 — absorber, 4 — screws and nuts securing the clips of the attenuator, 5 — frame, 6 — screws fixing the motor, 7 — the engine KMD-2,5, 8 — screws M3 engine mounts, 9 — supply pipe of the engine 10 and drainage tube 11 — fuel tank 12 — a nut of fastening of the hub 13 the hub-flywheel And rear wheels with fatty tires, 15 — motor mount (D16T), 16 — M3 screw of fastening of a tank, 17 — pin fixing tank, 18 — bracket 19 — valve, 20 — “antenna”, 21 — front axle (30KHGSA), 22 — “tyre” front wheel (fatty), 23 — disc front wheel, 24 — bearing, 25 — mounting nut of the front wheel.
To decide on the device front “bridge” was not easy. Some proposed to plant the front wheels on the two wire whisker, other — to make a spring cushioning hydraulic damper… In the end settled on a variant of the “rubber” suspension. The decision has reconciled many. The fact that the rubber has a higher damping properties than spring steel, and the selection of the shape and firmness of the dampers to achieve the desired characteristics.
Now need to connect the front axle with leading — and the model is compiled. The most rational method — using a steel or dural channel. It is easy to install and the front axle, and rear. With such a node does not need to epatirovat model bottom and side.
Important was and reliable design of the automatic stay. Decided to turn off the motor, blocking air flow to the carburetor. For “Vyatka” this method was the most feasible: beveled shtorku securely closed simple spring loaded valve.
And the last thing one would think is the fuel tank. For performance of such a layout more suited single-chamber “dolca” — because it is almost completely spared from the influence of centrifugal forces on the fuel supply to the carb.
We started with the motor. For her it took a dural block size 40X57X142 mm. Milling window under the engine and the hub was conducted with markup “in place”, that is, first in both walls was powerlevels hole with a diameter slightly larger than the sock motor, and then installed on the frame KMD-2,5 accurately mark the contours of the hole.
Hub-flywheel — 30KHGSA steel, hardened to σin = 120 kgf/mm2. The most attention “was paid to the cutting of apertures under a cone of the motor shaft. So the fit was tighter, we recommend you to use our expertise to fit the cone on the hub of the “paint” used as a caliber cone of the motor shaft. The wheel on the hub should not have a backlash.
The power of your unit assembled in the following order: the inside of the frame are put in the rims, and then mount through the side window, you enter the wheel hub, and wheel bolts are fixed on it; then on the frame the engine is set, and in the last turn tightens a nut that secures the hub on the shaft of the micromotor.
Frame “Vyatka” bent from a sheet of aluminum 2.5 mm thick, obstacle on the mandrel and cut as shown in the drawing. 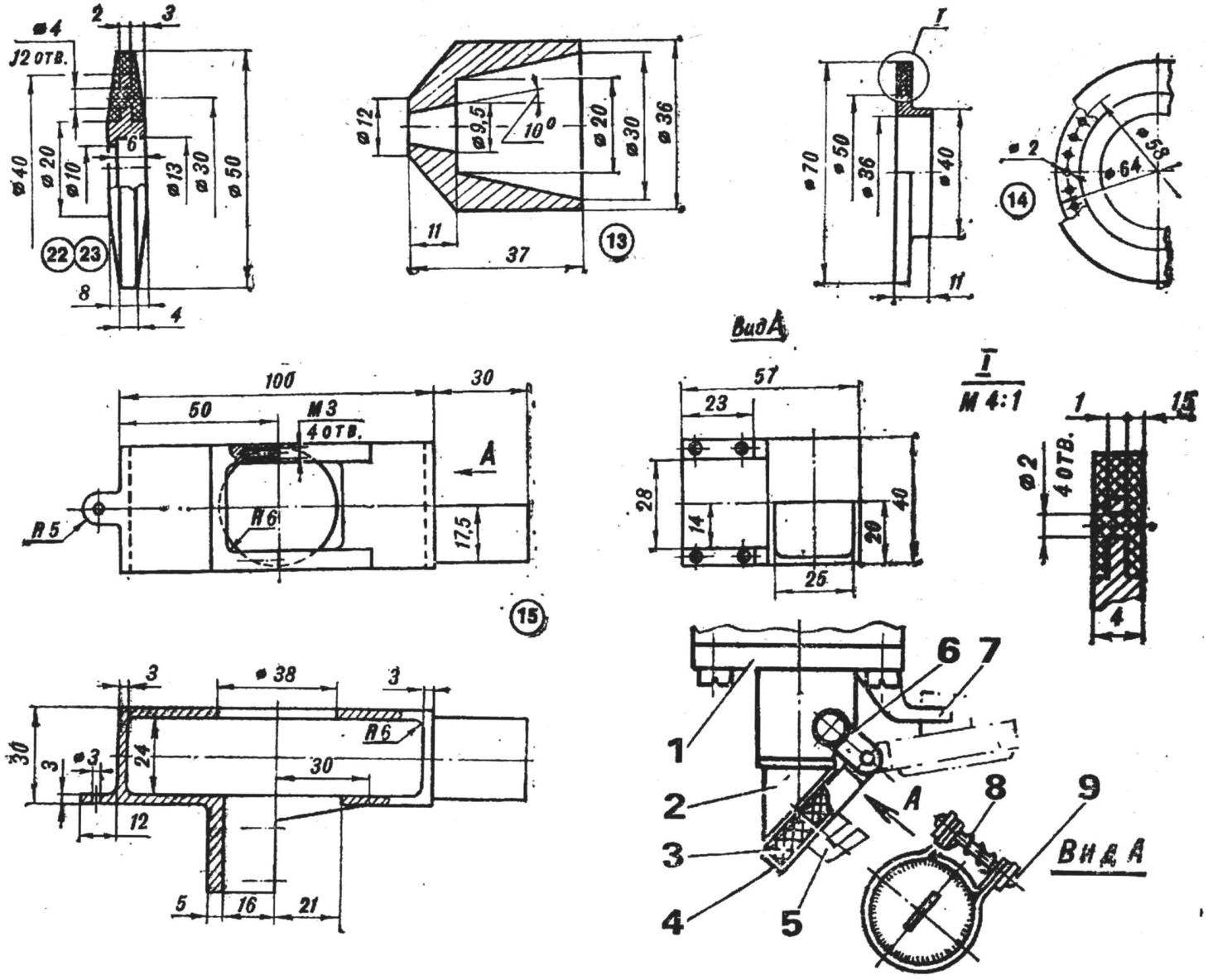 The device of automatic stop of the engine KMD-2,5:
1 — engine, 2 — overlay threaded carburetor, 3 — rubber gasket 4 — valve, 5 — hook clamps, b — bracket, 7 — antenna, 8 — clamping spring 9, the axis of the damper.
Front axle models — duplica rocking chair, one end of which is located the front axle and on the other arm. She rocking cut of duralumin sheet thickness of 10 mm. Clip two rubber dampers from a steel strip of thickness 2.5 mm. the Shape and degree of elasticity of rubber damping washers were selected empirically. It depends on the mass of the model and quality of the treadmill.
Fuel tank — tin solder. Previously the place was placed a wooden disc, and have it cut, bent and soldered the individual parts. Drain pipe laid along the top of the tank (inside), soldered along its entire length. Before final Assembly of the tank in its wall adjacent to Motorama, soldered the two screws — one of them the tank is attached to the ear on Motorama, and the other is a pin.
“Vyatka-2,5” was tested two fairing — fiber glass one, the other chiselling of lime. In fairness it should be noted that the complexity of manufacturing both about the same, the situation is different if such models is several.
Cord strap is the standard. It is fixed exactly in the center of gravity of the model. Note that the constructed “Vyatka” with regard to its movement on the track counterclockwise.
I. SERGEEV