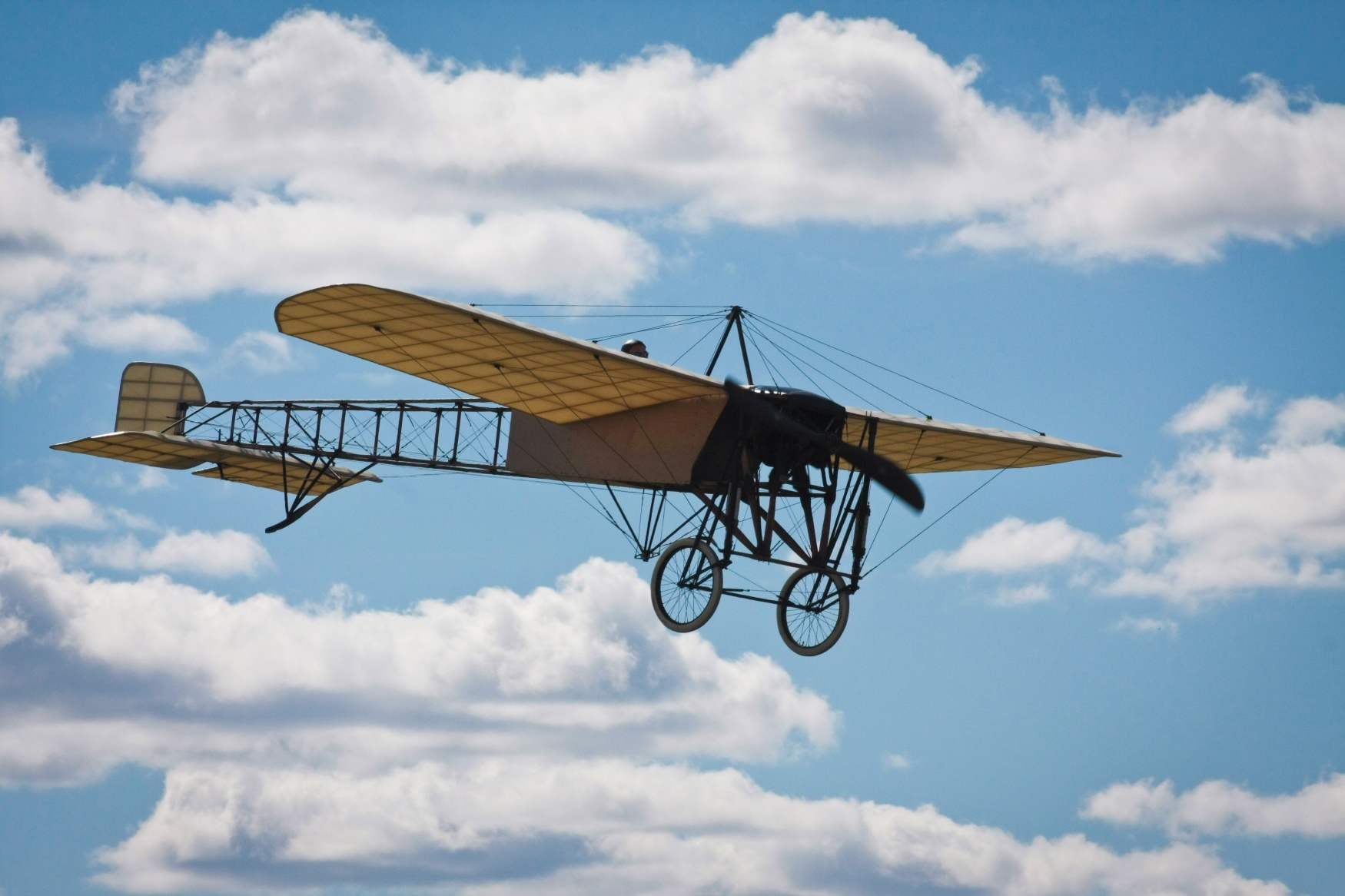 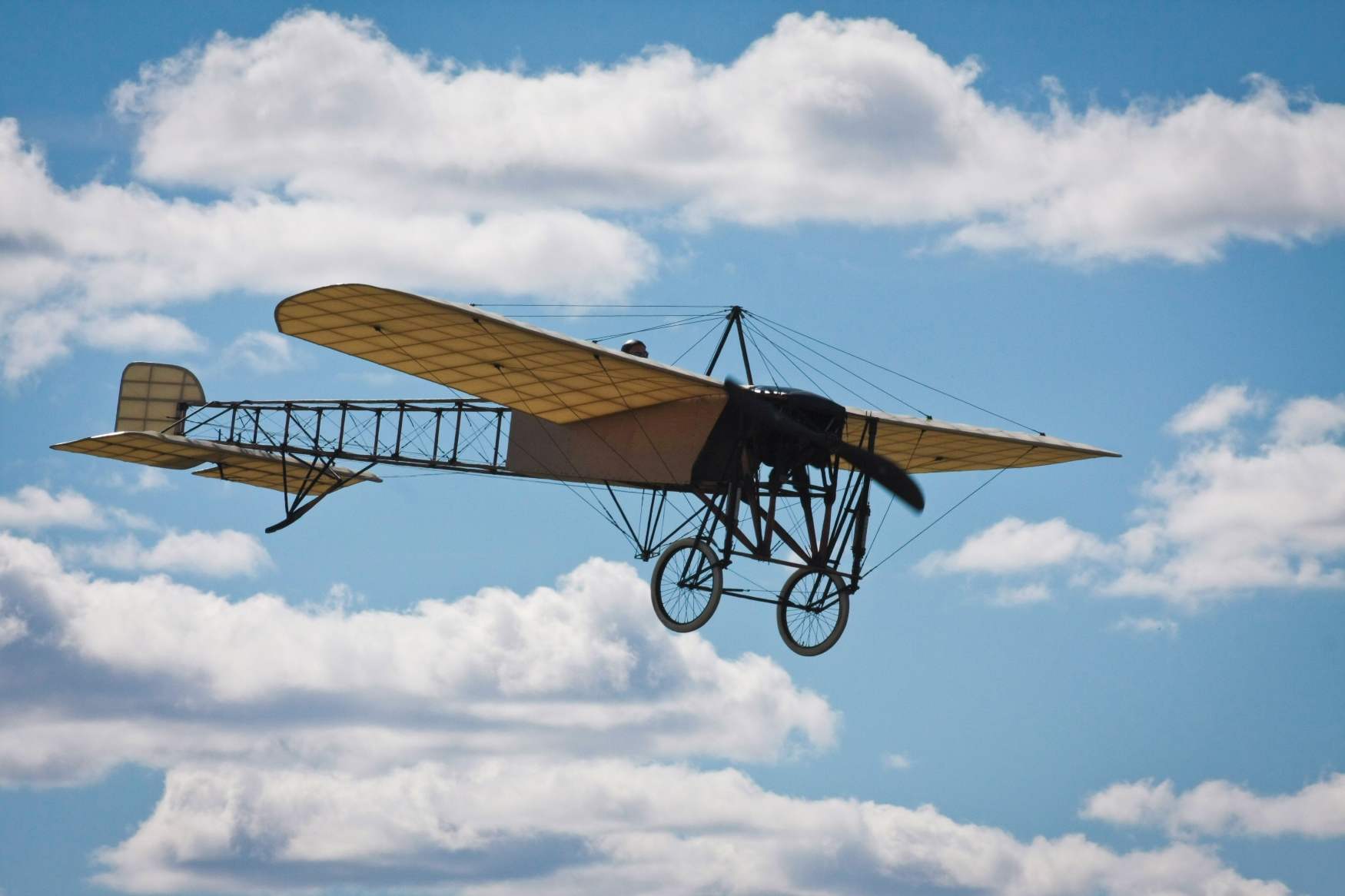 At the Moscow city competitions on indoor models in 1975, first place went to Evgeny Ermakov. His model is a copy of the “blériot XI” rubber engine showed in the three games great duration: 60, 64, and 50 C. None of the Soviet airplanes have not demonstrated a flight duration rezinomotornaya room-models. How is “micro-Bleriot XI”?
The fuselage is glued emalita of the longitudinal and transverse balsa strips a cross section of 3X3 mm. Left and right side panels are collected separately at the Plaza, and then joined cross struts. In the rear fuselage directly behind the last frame reinforced two plates with holes for the bamboo pin on which is fixed a rubber motor. To the front of the fuselage attached to the frame of the balsa slats and 2X2 mm 3X1 mm, which is struts and struts made of steel wire Ø 0,5 mm forms a chassis. The upper horizontal strut of the front frame, two strips of 1X2 mm, which are attached to the front transverse strut of the frame. Around the vertical side bars of the chassis wound thread, simulating a spring-loaded depreciation. Wheel carved from balsa wood with a thickness of 1 mm with slots to simulate spokes. In the hub of each wheel is glued on both sides celluloid washers.
In the locations of the tires of the wheels thickened annular plates. In the front part of the fuselage strengthened the layout of the three-cylinder engine “Anzani”, painted black. Through the front of the engine is removable nasal boss of circular shape with the shaft of the screw from a thin steel wire Ø 0,5 mm. from the Top of the front fuselage is located the “wild boar” for braces. To simulate the cockpit of the upper horizontal strut of the fourth frame of the fuselage are curved, and the second frame top spacer is missing. On the sixth frame of the fuselage bottom on a wire rack strengthened tail wheel, the rim of which is carved out of balsa wood with a thickness of 1 mm, four spokes glued from balsa plates of 0.5 mm and the hub is formed of two celluloid plates 1 mm. Side front part of the fuselage pasted the usual tissue paper and painted yellow. The tail part of the fuselage sides has a brace of black threads, running crosswise.
The wing consists of two halves — left and right; each is assembled from two edges, curves and ribs. For making all of these parts are used dry grass stems Ø 1 mm for edges and 0.6 — 0.7 mm for radii and ribs.
For the correct placement of the wing on the fuselage follows with a sharp steel needle to carefully make holes on both sides of the fuselage, observing the dimensions shown in the figure. In these holes the pins will enter the edges of the wing, and it thus becomes under the required angle. After the wing is thus located on the fuselage, it rusclimat thread to the upper triangular “boar” and the bottom flat of the pyramid. In addition, the bottom pyramid for hardness should be fixed by additional braces from threads. 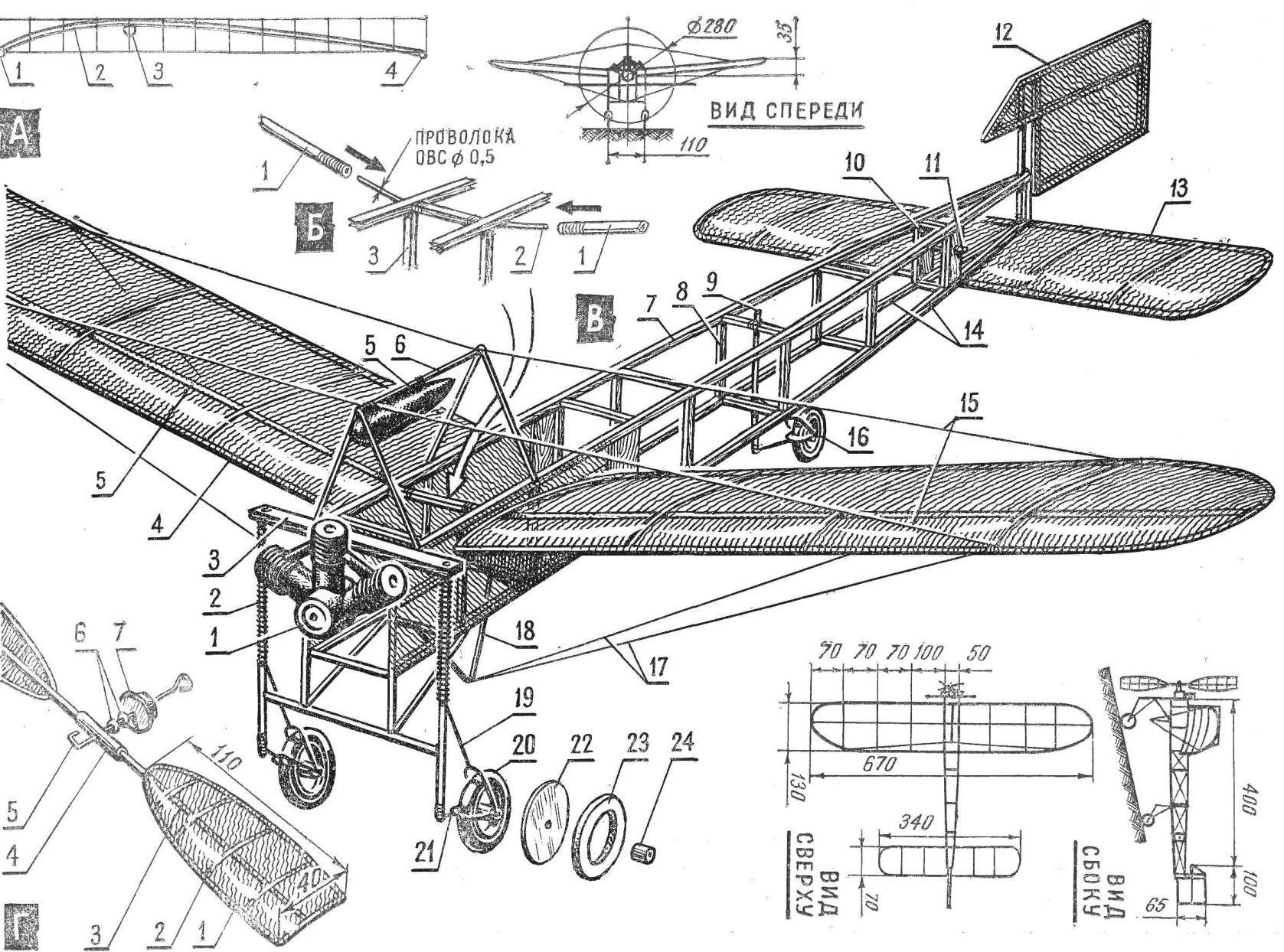