We all somehow got used to the fact that in the model aircraft competition “Experiment” most of the participants performs with apparatus of the type “flying wing”. Today, however, experimenting with such models is possible only in the sense to improve sporting results in the institutionalized rules of the subclasses. More serious problems “flying laboratory-wings”, as thoroughly investigated in aerodynamics to solve. The results show these models are much lower than conventional sports.
However, in recent years, innovations rules legitimized the broader boundaries of the field of creation of devices of unconventional schemes and layouts. However, apart from unusual to view Antonov an-athlete model of a modern fighter (the original, in fact, it is only a compulsory binding-rotor machine with the supersonic geometry), the real news, worthy of the title of the championship, is still there.
What’s the matter? Nothing to experiment, because it has long been known and studied? It is difficult to accept, and if these can be considered “flying wings”, then there are many other search directions, until just past the stage of preliminary designs and require practical simulations.
What are we talking about? At least get acquainted with several interesting ideas proposed by Aleksey Stasenko from Kiev. All of them are amenable to implementation in model execution and in the case of a successful implementation can provide invaluable in the studies of aircraft future schemes. We recommend these developments to your attention as one of the possibilities to restore the attractiveness of the competition “Experiment” and give them a focus that is really relevant.
“Duck” with a variable wing geometry
Proposed aircraft has a horizontal (normal) takeoff-landing. To reduce the landing distance of the side sections of the annular wing are deflected sideways-up, resulting in increased load-bearing properties of the wing as a whole. The nodes of rotation of the consoles can have a lightweight design, as calculated on the efforts from the high-speed pressures corresponding to take-off and landing modes. If necessary, reduce the height of the Parking keel bottom plane should be folded back, due to rearrangement of the lower wing element possible domainservice of the apparatus on takeoff-landing. In model variant it is advantageous to mount the engine with pusher propeller in the tail section of the fuselage. Can be built in Cordova model variant with an electric motor located in the center of the fuselage and extended shaft to the air screw.

“Duck” short takeoff-landing and rotary powerplant
Double-and single-engine aircraft. Propeller group has the ability to rotate up to 90°, which serves to reduce the length of runway distance (down to zero in the case of solving the problems of the stability and controllability at zero velocity). When turning the propeller group at angles up to 45° from the off ensures that the set speed required for inclusion in the work of the aerodynamic control surfaces. You can also create models in Cordova (engine or motor) or RC versions.

Aspuzana “duck” with variable geometry bearing surfaces
The original aircraft with a wide range of changes in the overall geometry. Can be created in model performance as a glider, and as of cord motor cars with control angles of sweep surfaces (in a more complicated variant — in addition to rearranging of all surfaces at angles of attack). Possible to provide “sesrulebuli” control based only on the shift of focus of the camera relative to the center of gravity in the horizontal plane. 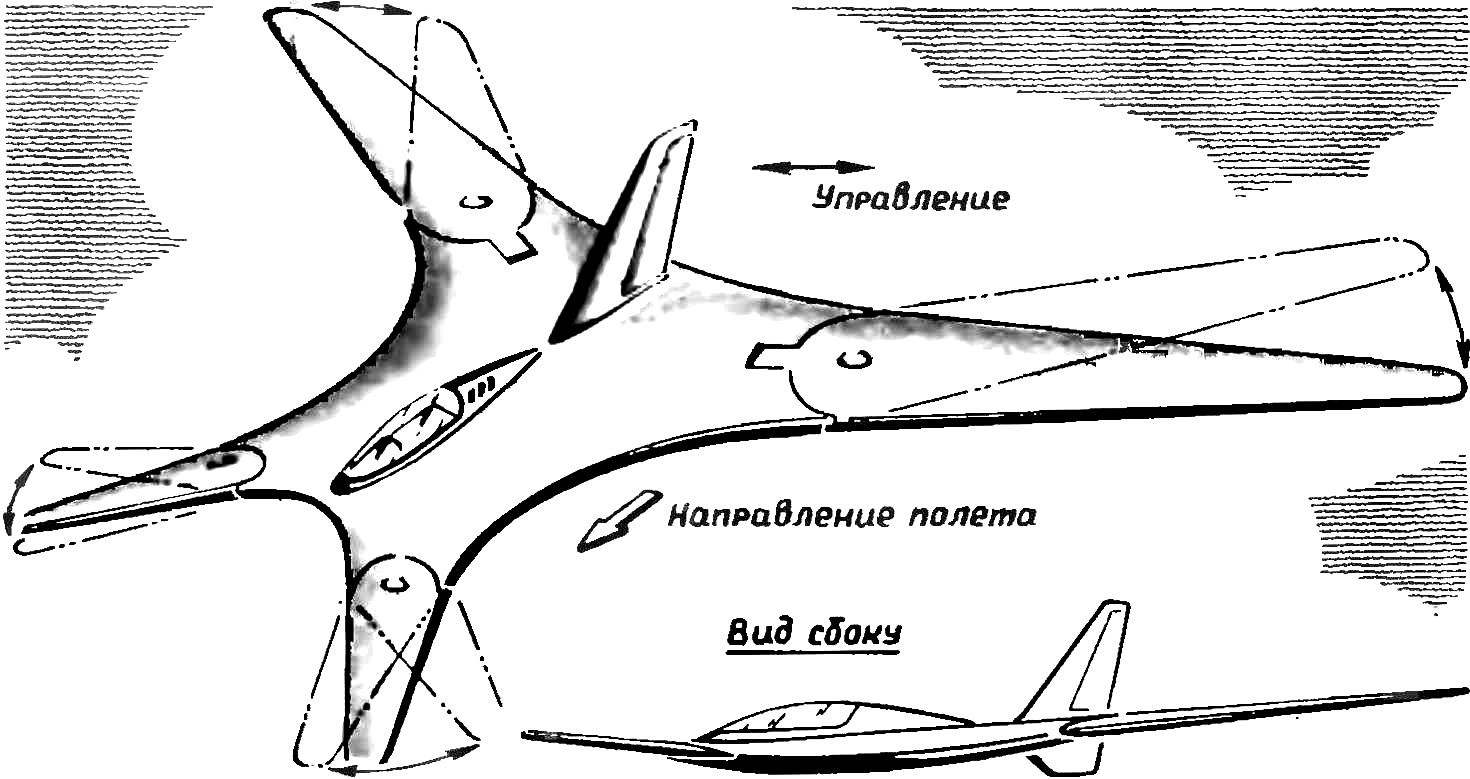 A hybrid of helicopter and airplane”the duck”
The lower part of the fuselage on takeoff rotates relative to the fixed top. The rotor spins due to the expiration of the gas jet from the turbojet engine through the ends of the blades. After the climb, the spinning stops and the unit goes into a flight mode of the aircraft-“duck” with the administration due to the extension of the blades and changing the angle of their installation. A possible implementation of an intermediate regime similar to autogeny. The latter occurs during the transition from helicopter (to feed the gases from turbojet propulsion to the ends of the blades) to airborne (gases in traction nozzle). 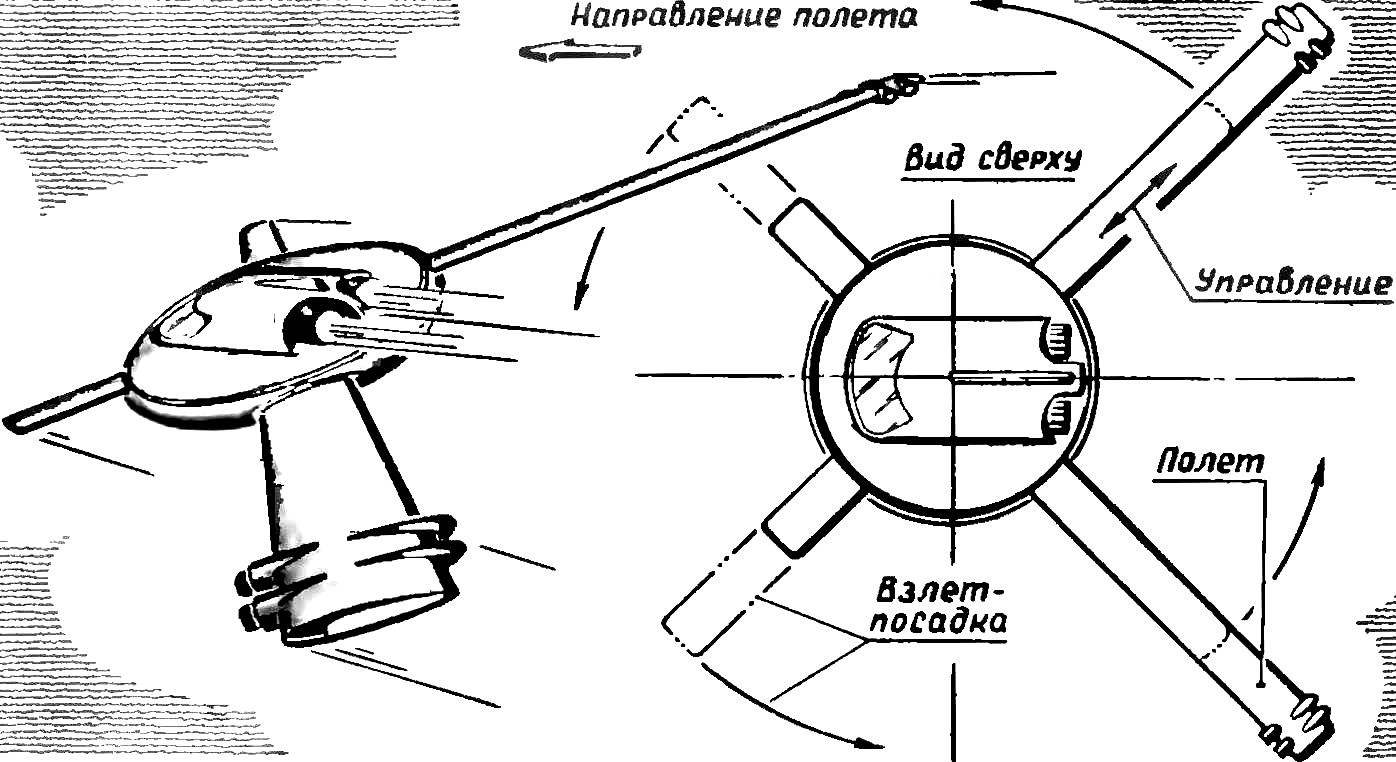 Very interesting apparatus with very sophisticated simulation. It is possible to use model rocket engines specchangelog discharged from the ends of the blades after their operation. After “helicopter” MRD must be ignited boosters (use of internal combustion engines is problematic due to layout considerations), followed by transition planning.