First the model of similar schemes appeared in the all-Union competition in 1982. With them were athletes from Moscow. But at the time of competition for soft raketoplana the type of wing”, Rogallo” they be not could. And further development of “hard” rocket gliders did not have. However, with the introduction in 1989 of a new category (S8 — rocket glider, which have not allowed separation of any elements of the design, including the engine block) this scheme has found a second birth in the category S4 (here design with soft wing is not allowed). In favour of the scheme say and world records set by V. Minakova and S. Ilyin, S. Ilyina at the training camp of the USSR team. The model we present to athletes rocketmodeler.
The fuselage of the rocket glider — tapered beam of plastic. It is molded on the mandrel of variable cross-section (maximum diameter 8 mm, the smallest is 3 mm), two layers of fiberglass with a thickness of 0.025 mm and one layer of carbon fabric with a thickness of 0.08 mm. After the treatment the mass of a beam with a length of 490 mm is 3 g.
At a distance of 132 mm from the edge of the bow glued the balsa insert with a length of 20 mm to enhance the attachment of the wing and the resin K-153 put the pad width of 8 mm and length 65 mm balsa.
The attachment consists of a Cup, bolts, gaskets and nuts. The Cup, which serves both the axis of rotation of the wing, are machined from aluminum. Particular attention is paid to the purity of the processing surface of the neck Ø 3 mm. Also made of aluminum grind the threaded bolt and nut M2. The gasket cut from a silicone tube Ø 4X1 mm.
In the beam of the fuselage, in the middle of a reference platform drill hole Ø 4.5 mm and on the opposite site sides of the fixed to the resin Cup. In the bow glued to the fairing, and the bottom — Pilon (balsa profiled plate size 15X50 mm and thickness 4 mm). The latter serves for mounting on the resin container MRD, molded from fiberglass to the mandrel Ø 13 mm. the front part ends with a fairing of lime, which made 12 holes for gas exhaust from operation of lifting charge. The fuselage rear ends glass fibre laminate liner with a groove for the cable of determinator.
The tail unit is cut from a balsa plates 1.5 mm thick, edges of the stabilizer and fin are rounded. The stabilizer is pivotally connected to the fuselage stops and under the action of the bands may deviate by 45° for the forced landing of the space Shuttle.
The wing consists of a center section and two consoles, its elements vyshkurivaetsya balsa plates 3.5 mm thick (profile PLANO-convex, for all consoles profile thickness is reduced to 2 mm). The details of the bearing plane swivel connected to the bottom glued strips of nylon fabric with a width of 15 mm. On the flight console mode are folded down, and the transition planning revealed under the influence of elastic bands attached to the hooks of consoles and center section. Where you touch the rubber bands are reinforced with plates of celluloid.
To the bottom of the center section glued the pylon balsa plate with a width of 8 mm. At the front edge of the wing and its height 4 mm, rear — 1.5 mm, due to which you set the installation angle of attack. In the middle of the drilled hole of Ø 3 mm, framed top and bottom celluloid overlays. The wing is mounted on the Cup, introduced from the top bolt and bottom it put on the gasket and tighten the nut. To prepare for the start of the wing with the combined consoles turn counterclockwise 90°, with the result that it lies along the fuselage, and in this position locks the thread. She needs to go through the right hook of the center section and the holes in the fairing container mrad. At the end of the combustion retarder lifting charge burns through locking thread. Released the wing under the influence of the bands, tightening the hooks on the center section and the fairing of the fuselage, returned to the position of “planning”. A rotation limiter is a wire hook from the OVS Ø 0.4 mm, glued on the resin in the pylon of the wing at a distance of 6 mm from the leading edge.
The balsa parts of a model cover the three layers of nitrocellulose lacquer and subsequent treatment with sandpaper.
Automatic forced landing — wick. The wick is tied with a cotton thread to the fuselage pylon mrad (this is a place for thermal protection, covered by foil), the free end of which is connected with the cable of determinator. The last to attachment of the wing goes from the bottom outside of the fuselage, where it enters the hollow beam and the rear goes through the liner, resulting in the stabilizer. As soon as the wick burns through the string, the cord is released from fixation and allows the stabilizer to deflect up to 45° under the influence of the gum. Rocket goes to the parachuting mode.
The starting mass of the model 30, the Center of gravity is located at a distance of 30 mm from the front edge of the open wing. The engine in flight is not separated. The rocket starts from ognestrela guide. 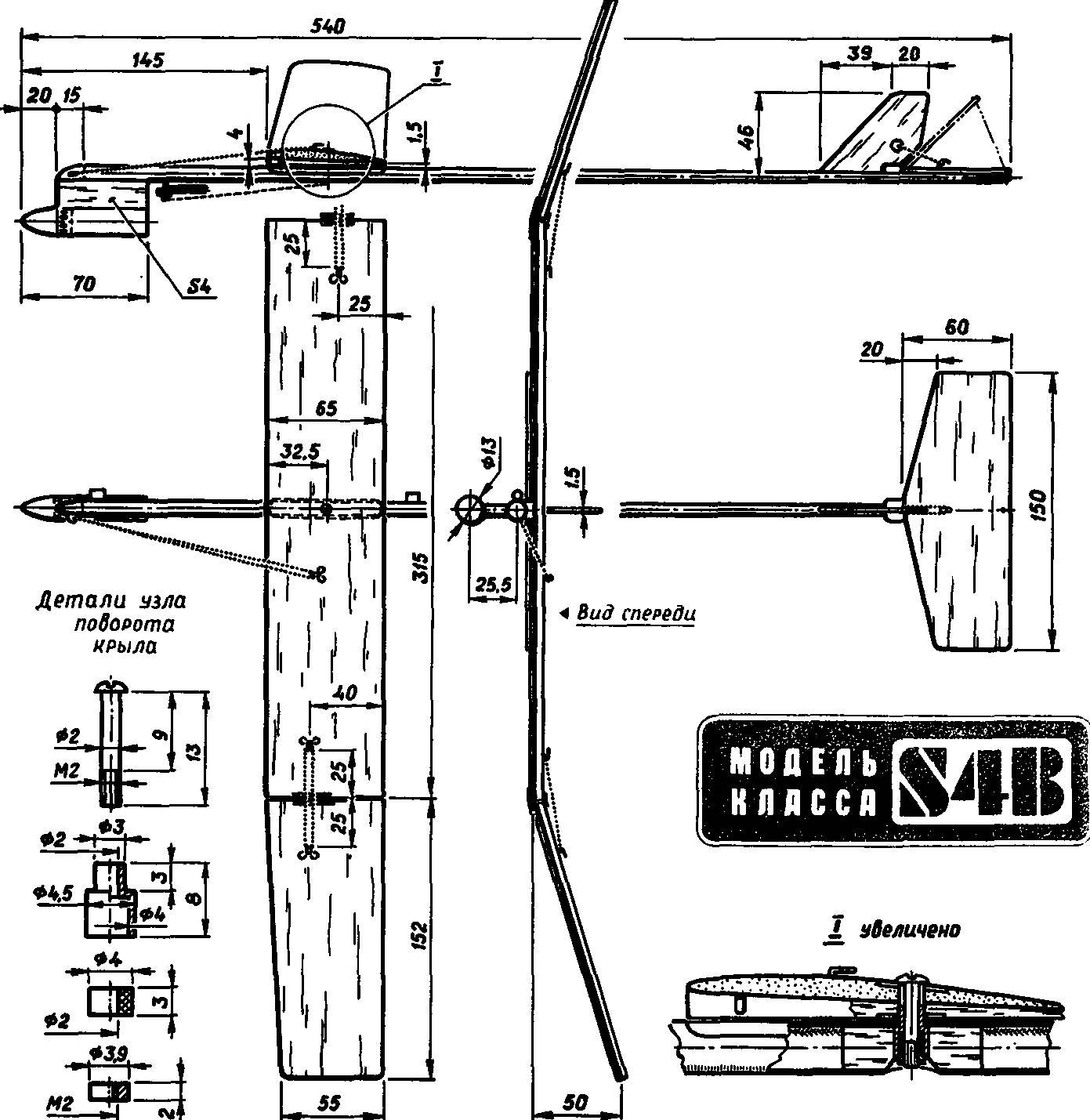