What models of gliders was not in the sky above the sports airfields! Short-tailed side by side with these, whose stabilizer it seemed unreasonably far related from the wing, the search of the optimal elongation of the supporting planes of the transformed outline of the airframe in the likeness of a flying ribbon, brachypterous, such aircraft unit. A few years ago, athletes arrived to a common opinion. Although each scheme had its own advantages and disadvantages, experimentally found the best dimensions that satisfy the conditions of soaring in thermals, the flight in a calm atmosphere and in a strong wind. Parameters recognized compromise (wingspan 2000 mm, chord 145-150 mm, shoulder 700— 740 mm), provided smooth, very good results.
But in recent years there has been another “technological revolution”. Athletes are increasingly turning to the narrow wing of increased elongation. Gliders with these planes, used previously only in a relaxed atmosphere masturbaitng, athletes are “taught” to consistently stay in the air in all weather conditions. The advantages of the use of large scale obvious: the wing operates at values of the lift coefficient close to the maximum. Therefore, the inductive part of the total resistance which is in inverse proportion to the elongation of the bearing surfaces, has a significant influence on the main characteristics of the championship soaring leader — minimum rate of descent. The narrower the wing of the same area, the smaller the intensity of the vortices escaping from the ends, the higher the quality (the ratio of lift to drag) of the aircraft, the smaller the minimum the rate of its decline.
Unfortunately, these basic requirements of classical aerodynamics come into conflict with the desire of modelers to create a hard, durable and at the same time the lightest console with minimal chord defined by the critical values of Reynolds numbers for profiles. With the last factor as a “handle” is possible by means of specially selected shapes of the cross section planes and applying different turbulence. Practical experience has shown that it solves the problem of increasing the rigidity of the wing of large aspect ratio as in bending, and (more importantly) in torsion. After all, the rise of the modern model of the airframe is unthinkable without the use of a dynamic start when accelerated to a high speed machine due to the additional kinetic energy is gaining a lot of 10-15 m height. Extra meters not only survive longer in the air, but also greatly enhance the likelihood of upward heat flow. If the plane of the model to calculate only the load of gliding flight, when the athlete would begin to disperse her, preparing to rapid “Astrela” with lifelines, fenders slight stiffness not only SAG, but will begin to fluctuate. Typical flutter! It will dramatically reduce the speed of flight and the soaring leader, descended from the rail, hangs in the air (usually the nose up). Here we should talk not about the extra height, and its loss is required for acceleration of the machine up to normal speed and damping resulting longitudinal oscillations of the fuselage. It is clear that the stiffness of the consoles need to pay close attention.
What is the modern model of the glider? Try to design and build it, taking into account all mentioned requirements. 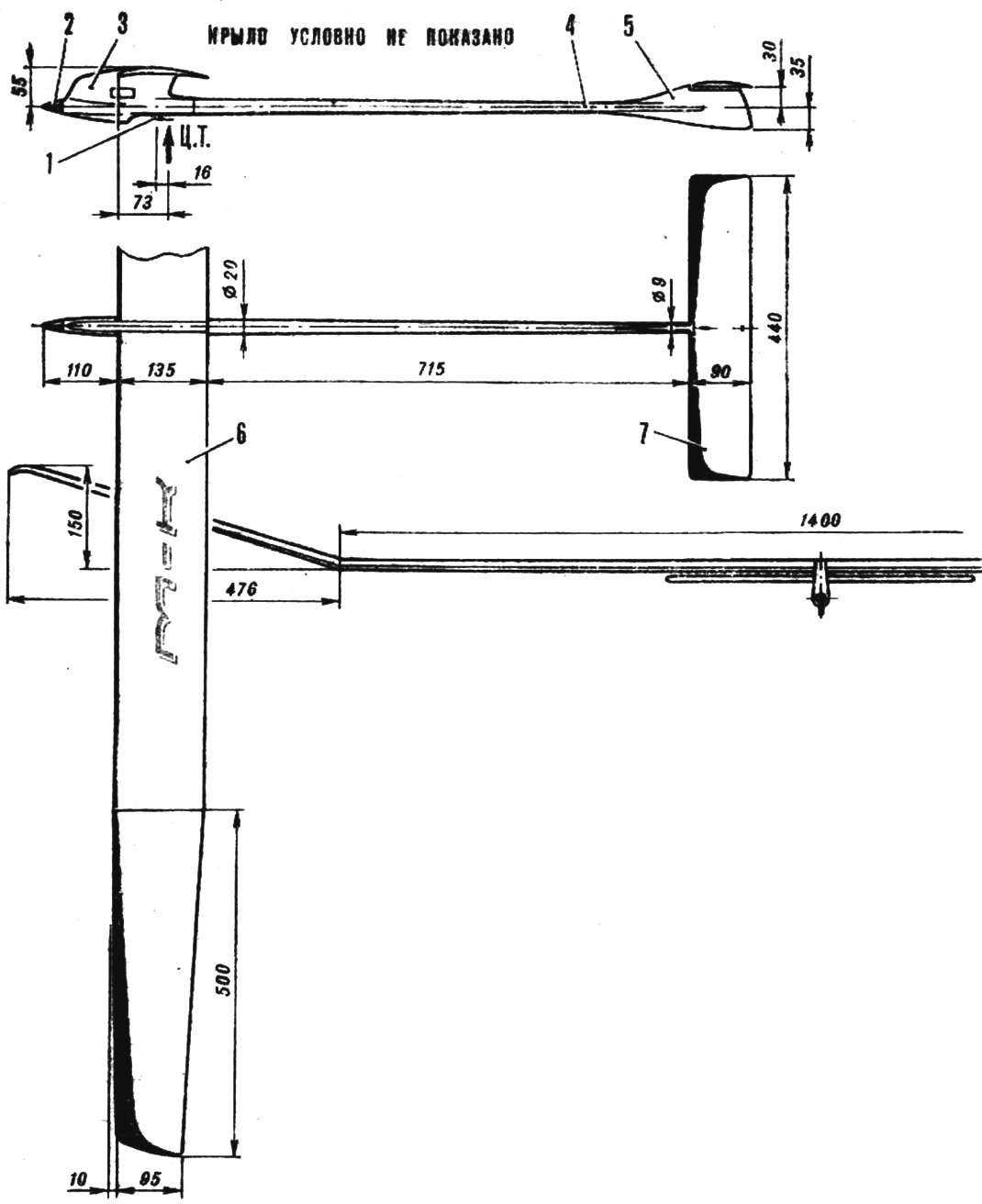 The design of the wing and stabilizer

A typical wing section:
1 — strengthening the leading edge, 2 — front edge, 3 — skin of forehead, 4 — shelf the main spar, 5 — three of the spar, 6 — rib, 7 — shelf support spar, 8 — panel auxiliary spar 9 — rear flange.
Let’s start with the wing, as the most time-consuming and demanding element. It is necessary to choose a suitable minor of the chord profile. The high strength of the kings would provide a substantial relative thickness of profile… But the aerodynamic characteristics of such wing completely unsatisfactory at low speeds and chords, especially as the size of the last reduced us almost to the limit. Have to apply a slim profile, designed for low Reynolds numbers. Has proven itself a profile designed by the famous Soviet athlete A. Leppo. Such cross-sectional shape of the wing will accept and we. Only… not quite. Previous research has shown that the blunt trailing edge of the wing characteristics do not change. Why don’t we use this fact? Moreover, by building on the coordinates of the profile chord of 150 mm and having cut off his ponytail at 15 mm is possible to increase the Reynolds number when the chord is 135 mm, while increasing the relative thickness of the wing. Also important is the possibility of narrowing the trailing edge while increasing its thickness. If it is performed by the source profile widths have to make significant, since the rear edge portion turns into the knife-like plate (by the way, is very prone to various distortions). When the blunt tail reduces the weight of the edges, and the probability of distortion of the shape of the entire wing is less. The “saved” weight can be used to increase stability. Do not forget that it is desirable to maintain the minimum weight of the consoles: the faster extinguished accidentally caused in-flight vibrations.
Deserve attention and the ending. Bent down and increase the radius of your bend when approaching the trailing edge, they also reduce the intensity of harmful trailing vortices.
The root portion of each of the consoles will draw up plans a number of ribs of increased strength. Through them will pass the pins of the hinge wing on a large scale, creating significant bending moment in the seal. Usually applied two-pin linkage, here is not superfluous and a third node. The wire diameter of the pins — 3 mm, their length — 210 mm. In a pinch you can use a steel grade optical fiber, but it is better to specifically make and termoobrabotki pins of steel khvg.
So, let’s begin. Cut with the maximum available precision of the templates from sheet duralumin, handle between them of a pack of ribs for the wing and the ears. The first five, installed in the root of each console, polutorametrovoy made of plywood, the rest is balsa of different densities (at the ends of the wing ribs from light wood) with a thickness of 2 mm. Prepare the trailing edge (balsa section 12X4 mm), tapering from the crest consoles to the ends of the ears, and the pine shelves spars of variable cross section. Their width decreases from 10 mm at the root to 2 mm at the end of the wing. Thickness top shelf in 2.5 mm, bottom 1.5 mm Additional longitudinal pine, the cross section of the strips changes from 8X2 mm to 2X2 mm. balsa cross-section of 4X5 mm cut front edge. In the root plywood ribs for additional template drill holes Ø 3 mm pins.
THE COORDINATES OF THE PROFILE OF AL/33

If you are ready the main elements, we proceed to the Assembly. It will certainly spend on the Board-stocks, marked out on the surface position of all the longitudinal and transverse set. Glue the main frame, and put under the edges of the slats wedge shim that sets the required wing twist. It should be like this; a fracture of the right console + 2 mm of the leading edge; the center-console left untwisted; the ends of the consoles + 3 mm of the trailing edge. Endings exhibited relatively fracture the console, the center section is relative to the root section. The specified deformation of the planes provides debugging planning in the right turn. Install diagonal spouts and tail oblique polonaruwa, giving the frame a considerable rigidity.
Now it is the wall of the spar and tight “forehead” wood. For plating, you will need light balsa with thickness of 1 mm. Carefully fit the sheets to the front edge and shelves of the spar, and then, without removing the frame from the pile, insert the upper part of the casing in place. The bottom set removed from the Board wing, immediately after that it once again fixed on the slipway. After the glue is mounted pine plate leading edge is sheathed with balsa root area of the wing, stick the root end rib, cut from plywood in the thickness of 1,5 mm. In General, the wing was ready. Remains Pro-skins frame and covered his thin long-fibre paper. Secured on the staple portion of the consoles have to stay on it for at least a month, only then the probability of random curvatures of planes will be reduced to a minimum. Carefully adjusted to each other’s ears and the center section, made separately, are joined with epoxy. The front part of the seam is helpful to strengthen prillerova scarves, carved out of the finest fiberglass.
The stabilizer has a PLANO-convex profile with a relative thickness of 6%. As shown, this horizontal tail corresponds to the alignment model, 54% of the chord of the wing. If the glider is reluctant to gain altitude after an energetic dynamic start, we can recommend the thicker profile of the stabilizer (although valid and forward shift of the center of gravity while decreasing the angle of attack of the tail). If the model nose up sharply and slowed down, the center of gravity is shifted back with a corresponding change in the position of the stabilizer or on the latest used lenticular (up to symmetric) profile.
The horizontal tail must have a minimum weight, so all its elements pick up a light balsa. Ribs are cut from millimeter veneer, the trailing edge has a cross section of 2X8 mm, front — 4X5 mm and the spar — 2X5 mm. If finished, covered with paper stabilizer weighs 8 g, so you managed to do it excellently. The Central part of the edges after pasting enhanced by bamboo splinters. The stabilizer mounted on the keel pad with front and rear nodes.
The rudder is unconventional. The main purpose of this layout is to release the stabilizer from damage when landing from parachuting and increase the effectiveness of the vertical stabilizer without changing its area. Manufactured stacked with a shell of a simple frame mm balsa veneer. After finishing the exterior trim from the keel is cut and the hinge is hung on the rudder, is glued platform bed stabilizer and mounted the power steering servo and control linkage lift edge of the horizontal stabilizer when switching to parauterine.
When working on round the tail boom of the fuselage, with a retinue of mm thick balsa and covered with fiberglass with a thickness of 0.04 mm, follow the culture weight. Light tail section of the airframe — the key to a steady flight even in gusty wind. 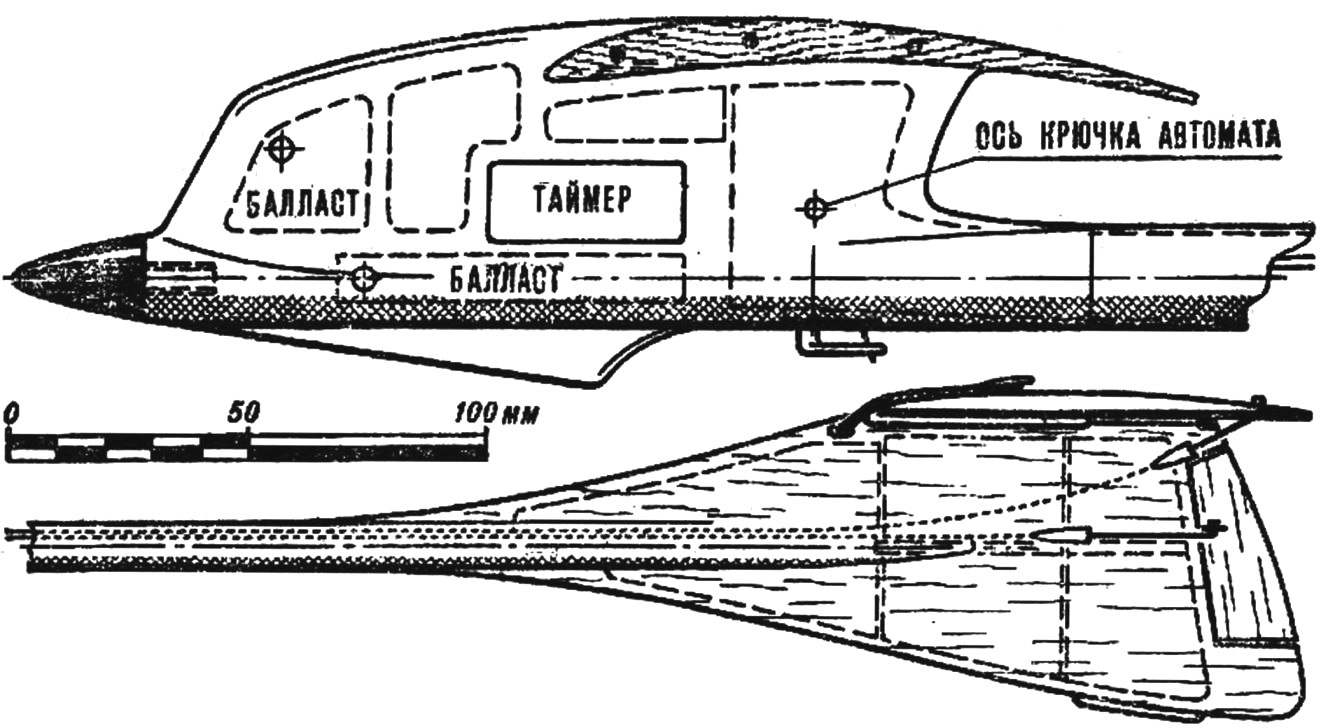 The nose of the fuselage (top) and keel design.
The nose part is cut in two parts lime, and after preparation of internal volume that conceals the hook-machine dynamic start, the clockwork timer and the camera with partial load tion of the ballast is glued together and is covered with fiberglass with a thickness of 0.1 mm. then glued the plywood connecting ribs are inserted pins and wear parts fixed brass balance weight. Ballast is also used POI accurate adjustment of the position of the center of gravity of the model and refining its mass to the required rules 410 g (with a better warranty, a little more than a — 412 d).
On the wing across the span at a distance from the leading edge to 5% chord on the upper surface of the thread is glued to the baffle with Ø 0,6 mm.
Hook-machine dynamic launch model with the similar design as described in the journal “modelist-Konstruktor” No. 3 for 1976. The force required for opening the latches of the ring rail, equal to 3,2 kgs.
DMITRIYEV