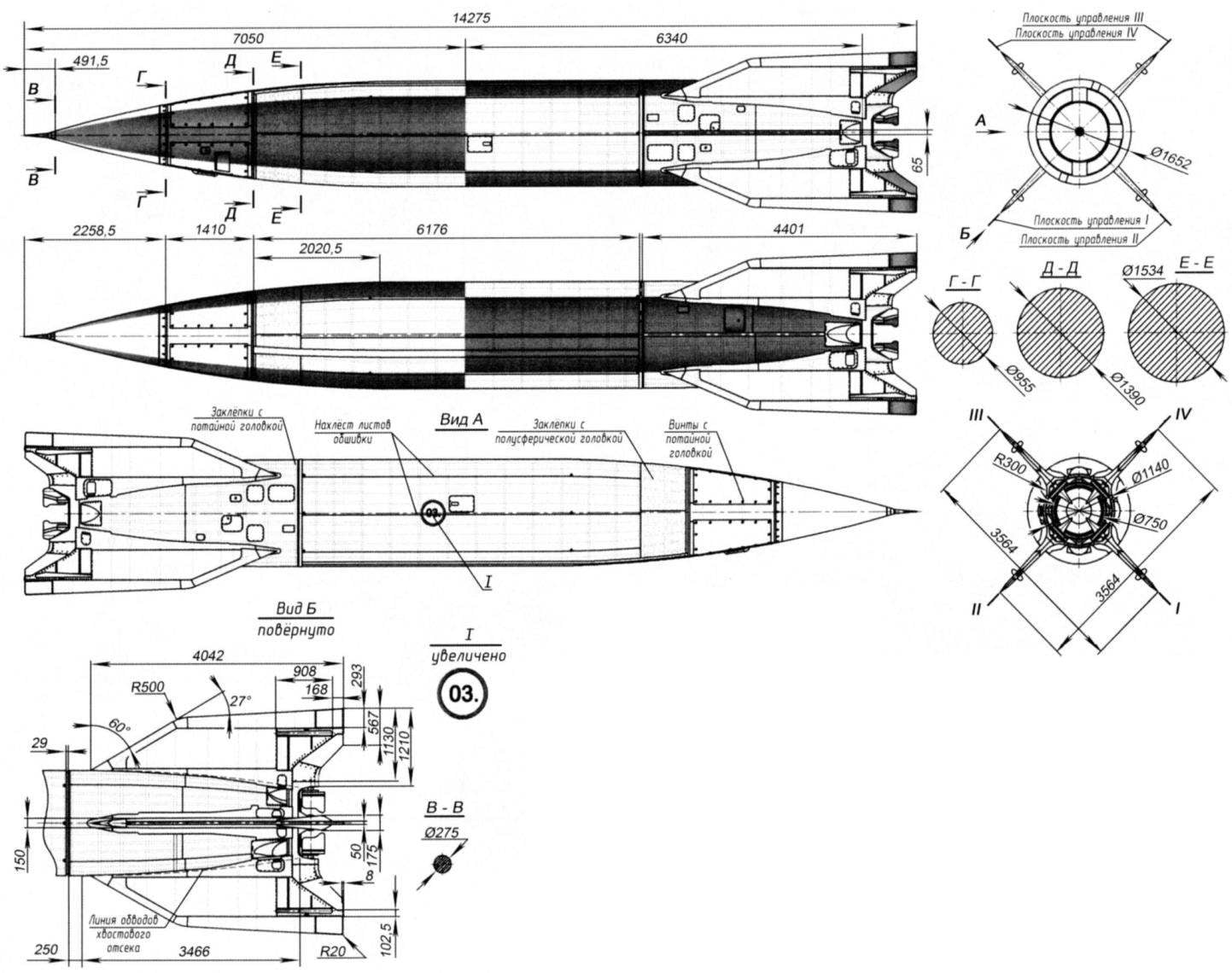 History of rocketry in our country today is widely reported in the local media. In my opinion, it is interesting it is stated in the book “Rockets and people” – B. E. Chertok (Publishing house “RTSoft”, 2006) – a direct participant in the whole period of the birth of rocket and space technology. These books “pushed” our children-rocketmodeler to implement the idea: to recreate the models in the basic steps of creating missiles and combat shield of the Fatherland and the achievements in space technology. This project was a contribution of students in the Year of Russian cosmonautics and the 50th anniversary of space flight by Yuri Gagarin.

R-1 ballistic missile long-range, was adopted by the Soviet Army in 1950. At the same time, along with the military objectives of the R-1 helped to solve large scientific problems. On its base was created a research rocket warheads which were equipped with different hardware, and later a cabin for animals. On them were worked out ways of returning to earth head parts with research equipment and containers with animals – dogs.

R-1 was the first “step” to create a rocket to launch the first satellite for a space flight by Yuri Gagarin.

Rocketmodeler young technicians Elektrostal tried to create a kind of exposition of the existing model from R-1 to rocket spaceship “Vostok”, made in the same scale. Participating in this work, the children enjoyed not only the process of technical creativity, but also involved in the Patriotic education, studying the history of domestic rocket and space technology.

I believe our young readers to the material in this series will help to expand the range of techniques of design and technology the manufacture of flying model kits rockets to participate in the competition flying the sport.

Before you start building any model-copies, necessary to collect a maximum of documents at the selected prototype, which includes photographs, drawings with dimensions of a real spaceship. In this case, very helpful books:

In my opinion, the most useful books V. Minakova (new edition), rocketmodeler in the world just yet.

So, leaving your choice on a specific prototype (in this case R-1), select the scale of the future model. Years of experience design I think that is the most appropriate scale 1:25. It remains to count all the dimensions for the model, and make it a working drawing, given that this copy is built for competitions in category B-7.

The next step is the fabrication of mandrels. Need three: two ogive for bow, length 138 mm (this is the baseline size) for the tail section with a length of 147 mm. the Third is cylindrical, with a diameter of 65 mm. thus it is necessary to pay attention to the surface quality of the mandrel – cleanliness class treatment is about 7.

Production of the model. The case of the model – components: a cylindrical portion and two elements of arched form. Cylindrical glued two layers of paper – the “Delineator”. After drying, the resulting billet is treated with fine emery paper and coated with a single layer of nitro lacquer. Then clamped in the Chuck of the lathe and on small turns butt to your desired length -167 mm. Then paste it on the single layer of thin paper (for copier) after placing it on the layout to simulate a riveted hull seams. This operation is performed the ordinary hour wheel, mounted in a tool holder. For stickers applied water-dispersed clay “the Carpenter”. 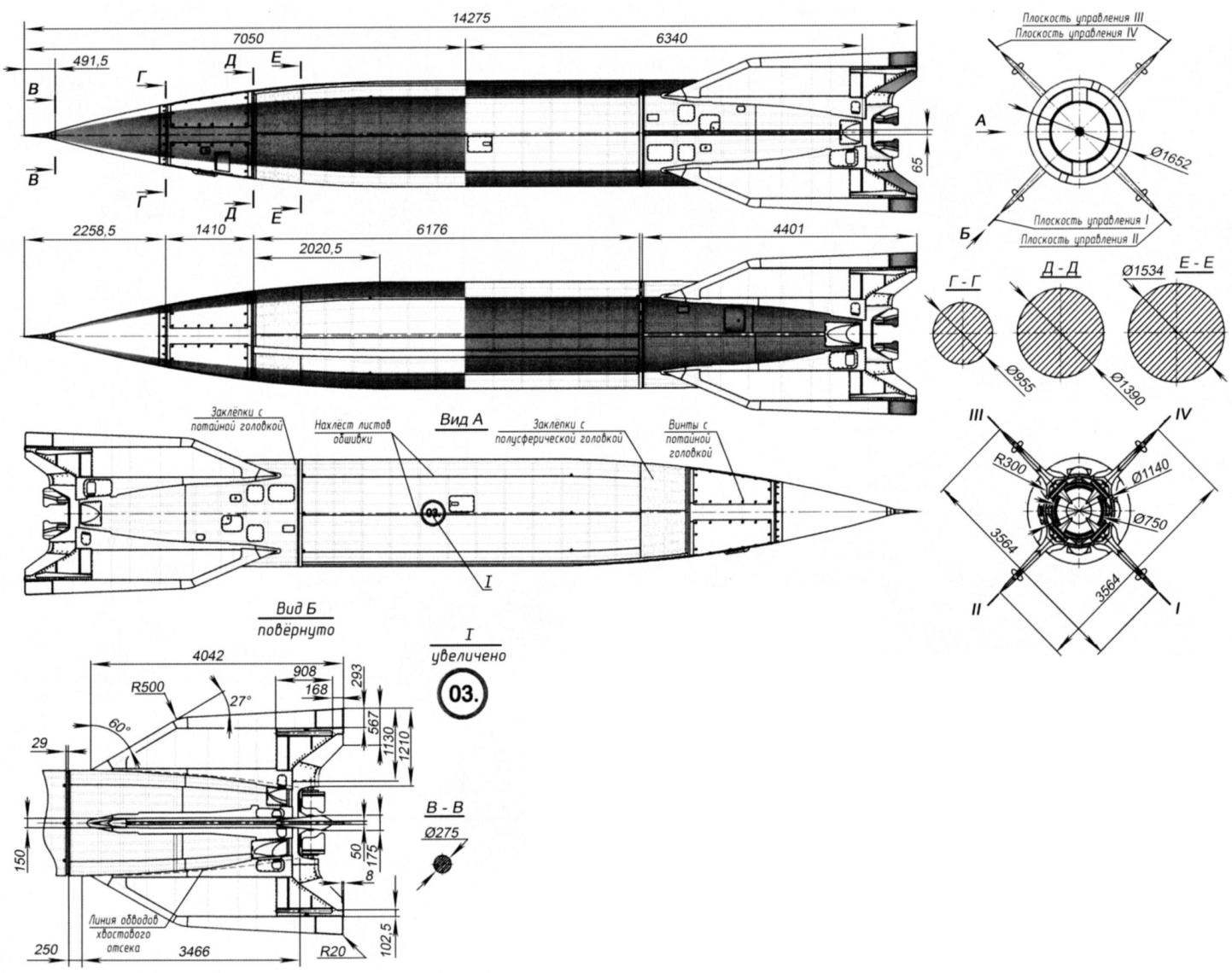 Details arched form vyklevyvajut of paper as papier-mache – the “petals” on the respective mandrels, which are first slightly heated and lubricated with a separating paste (“Edelvays”). The “petals” strips of paper – trapezoidal shape, the greatest width of 25 – 27mm and a length equal to the length of the parabolic generatrix of the mandrel: one is 157 mm, another is 153 mm. it Should be borne in mind – for a single layer you will need eight petals. Layers eight.

Cut the “petals” moisten in water, is removed, lubricate with white glue, placed on the mandrel and smooth out large folds. Then glue in the same way the rest of the “petals” around the mandrel. The width of the overlap should be 3 to 4 mm. And so eight layers.

After drying mandrel for 8-10 hours with it glued workpiece is clamped in the Chuck of the lathe, centered and treat the surface with a chisel. The rotation speed -200 – 210 Rev/min. Then treated the surface with a strip of emery paper of different grit. Hereinafter, shpaklyuyut and again treated with fine sandpaper (No. 240). If there are irregularities -the operation is repeated. After that, make roll (imitation) riveted seams and butt the workpiece to the desired length: the bottom – 147 mm, the upper -138 mm, and it is also cut into two parts – 80,8 mm and 56.4 mm. Next the mandrel, removing from the machine, is heated on a stove to a temperature of 60 – 65 degrees and remove ready elements of the case.

On a lathe from basswood turn fairing and glued to the coupling boss, made of wood, her butt glued to the tube (bottom) for attaching the suspension loop of the parachute. At the top (ogive) part is also glued splice sleeve for mounting the entire head of the case. Then, using the arched part of the bushing is combined with a cylindrical.

In the lower part of the tail section glued two frames: one reference, the other for mounting of MRD. They are machined from the balsa plate, scored five and seven layers of veneer with a thickness of 1 mm. then through the connecting sleeve reinforce the tail section with the cylindrical portion of the housing.

Stabilizers (four of them) are cut from the balsa plate thickness of 3 mm. around the perimeter of them around the fake slats, 3 mm thick, connected to the package and processed using a loop. Then disassemble the package and profile each stabilizer individually coated with nitrocellulose lacquer. After that, they paste over, applying glue Stolyar, paper with printed marking of welded joints and riveted joints fragments of feathers. The welds resemble thin strips of paper (width 0.5 mm) and rivets – the rolling gear of the clock. 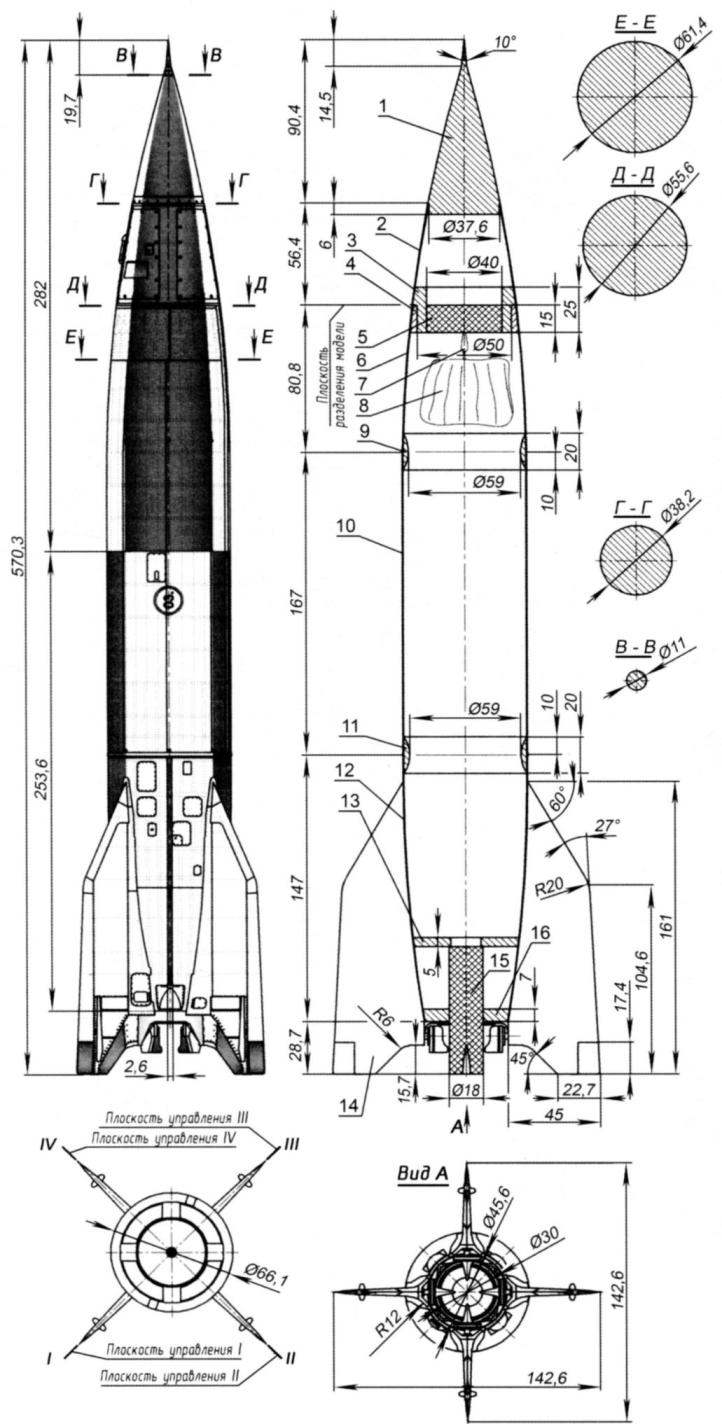 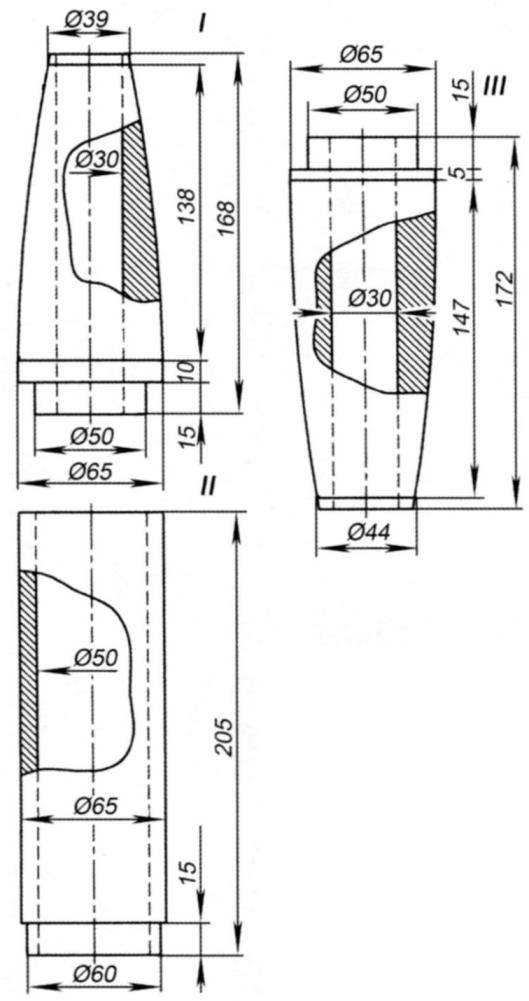 Mandrel for the manufacture of elements of the case models of the R-1:

I – the bow of the hull; II cylindrical; III – the rear compartment

Further, the adjustment of each stabilizer in place to the caudal compartment, the curved part side. In their touch to the frames glued two studs bamboo and epoxy resin attach the stabilizers. After drying, the resin joints strengthens the paper shaped plates, mimic fairings stabilizers.

For the above compounds of all elements of the case used coupling sleeves of lime. To ensure compliance with overall dimensions of some elements may have to earn their end faces.

The finished model after Assembly, lightly sand and cover with a nitrovarnish. Then paste exterior content (manholes, power strips, etc.) and paint in the desired color, guided by appropriate documentation.

In this part of the model place the other parts (pads, gas rudders, etc.), making them out of basswood and painting in black color.

This model is a copy of the R-1 is equipped with two silk parachutes with a diameter of 600 mm and 400 mm (fore part). The separation of the forward part of the model for the commissioning of the parachute occurs at the parting plane at a distance of 147 mm from the top end models. Starts the R-1 motor MRD 10-10-4. Flight weight of the model is about 150 – 160 grams.

V. ROZHKOV, honored worker of education of the Moscow region