The greenhouse is hardly surprising. As in the days of V. dal, compiler of dictionary of the living great Russian, it’s all familiar “hothouse without the furnace; dug-in srubar, a box of manure and black soil, indoor removable Windows for Virasana early greens, vegetables or fruit, loving the heat”. Keeping the overall features of its numerous analogues, greenhouse and received recognition from the members of our garden co-op has substantial differences. This excavation shed design that runs on biofuel and is equipped with mechanical system avtobronetehnika. As a “removable Windows” used house the sashes, the Central one of which – with opening transom or large window.

The production of this greenhouse begin with, dig a hole (trench) with a length of 3-4 m, width 1.3—1.9 m and depth 0,5—0,7 m. Wall — inclined, so as not crumbled. It is possible that loose guttering and the soil they even need to strengthen boards in the thickness of 25-40 mm, poles, or bricks. To the pit is not eroded by the rains, at a distance of 400-800 mm from it is advisable to make a drainage looped groove, and for ease of maintenance of the greenhouse is to provide shelter groove wooden boards (on the drawing conventionally not shown).

Piping (“srulec”) greenhouse made from sanded logs with a diameter of 150 mm or from thick boards, securely fastened at the corners. Sometimes in the middle “prodelin” install additional bracing in the form of struts.

Logs and boards on top should be planed to frame tightly to the rail of the greenhouse. North side (“Marubeni”) strapping 150-200 mm higher than the South top balance beam or Board which it is advisable to choose a quarter or nail a rack focus for frames.

After the production of the greenhouse it’s stuffed with biofuels and covered with soil.

At the same time see that the distance from the surface to the film or the glass was not less than 250 mm.

Hollow lean-to greenhouse can be constructed in a different way. Digging a pit in each corner and the middle of the long sides dig in or drive in the pillars with a diameter of 100— 120 mm, which on the inner side put a Board in order to avoid the crumbling earth walls, and at the projecting outer part form a wooden box. Other designs mount the same way.

Often fall to the spring, when seedlings and vegetables, planted in buildings protected ground, suffering from frost. Sometimes not save even reinforced glazing or double film coating. To protect plants can only heated greenhouse, for example, use of biofuels, the most common types which are manure, compost and trash the house.

Although the greatest amount of heat is released during decomposition of horse manure, but it is these days to get easy. We have to settle for what farm specializing in the breeding of cattle.

Harvested manure in the fall. Storage need it to collect (with stratified compaction) in piles three meters wide and a height of from half to two meters, insulate with straw, sawdust or peat and cover, to avoid freezing in the winter.

In the spring, before stuffing the greenhouse, manure should shift to other, looser pile and reheat. To do this, in the future biofuels make a few holes, and into each poured a bucket of hot water. Then stack and cover with sacking or matting.

After two or four days, when manure is heated to a temperature of 50-60 °C, they fill the greenhouse. At the bottom of the stack cooler, and the top and sides hot. After two or three days after precipitation, add a new portion. Make sure that the manure was lying loosely; only its walls are slightly compacted in order to avoid the formation of voids. Poured on top of garden or sod-soil, compost or fertilized peat. 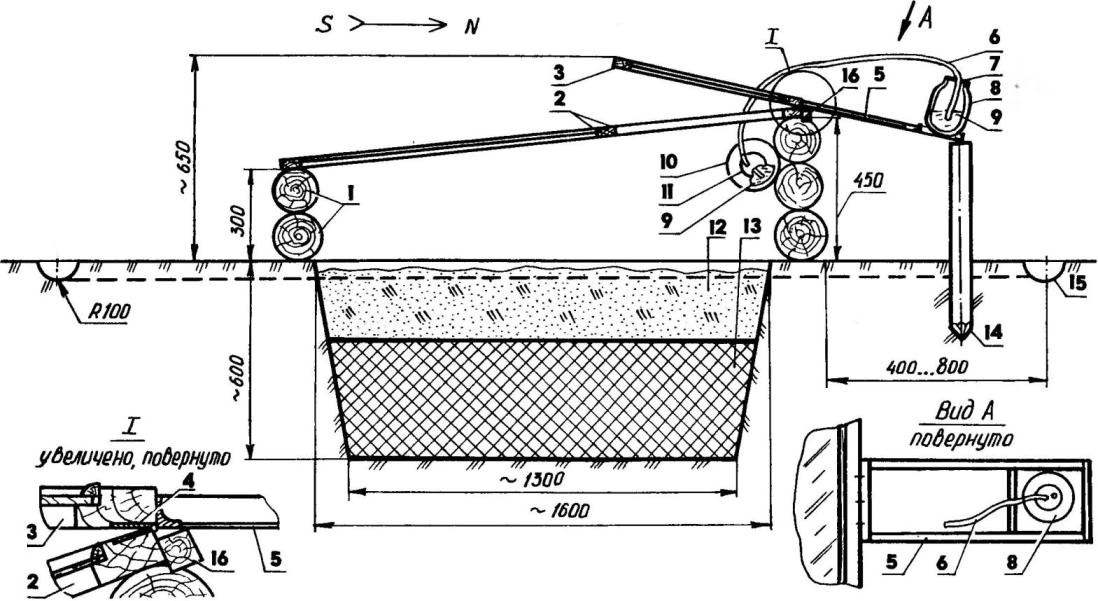 When filling the greenhouse with biofuels all need to be adjusted so that from the ground to the frame was not less than 250 mm on average have 0.2 m3 per 1 m2 area of greenhouse. Exceed this setting is not recommended, as under the weight of the earth the manure is compacted, it is difficult air flow, and it ceases to “burn”. For this reason, you should not excessively moisten the soil.

Instead of manure to the greenhouses you can use biofuels derived from… plants. Technology growth: take an ordinary barrel, and stuffed to the brim of freshly cut grass. Then pour water with the addition of handfuls of urea or any other nitrogen fertilizer. On the barrel hoisting the lid and put on top of a heavy boulder, or some other cargo.

After 1.5—2 weeks “plant” manure is ready for use. When diluted with water in ratio of 1:1 or 1:2 to give a solution, which is poured over the vegetables in hotbeds and greenhouses. Solid residues are put in a compost pit or plowed under berry bushes and fruit trees. As demonstrated by science and confirmed by the practice, any of these varieties of “vegetable” manure is extremely rich in nutrients for plants, so wholly devoid of helminth eggs and other pests.

On the compost, its biological and energy value, features of preparation and application of the “modelist-Konstruktor” has repeatedly reported to his readers (see, for example, № 5’99, 7’02). From my own practice I can only add: that this type of biofuel best to justify expectations of the owners of greenhouses, you need to take responsibility for his warehouse for maturation. It is possible to recommend, in particular, the use and special drawers with removable lining, which can be easily manufactured even at home. The source material for this Board thickness of 30 mm. the size of the box is arbitrary, but it should have a gap for natural ventilation.

Finally, on the home waste as the, perhaps, the available biofuel for greenhouses and hothouses. Using it note: 10-40% of the composition here — paper and rags. Although warmed up the house debris slowly, but reaches a temperature of “burning” of horse manure and keeps it for quite a long time.

In conclusion, the automatic device is able to monitor the air temperature in the greenhouse by rapid opening and closing transoms or vents. Unlike the well-known and sometimes quite original counterparts (see, for example, developing M. Kuznetsov, published in the journal “modelist-Konstruktor” No. 1 ’91), is perfectly “working” ordinary water in two tanks— glass jars with a capacity of 1 and 3 l

In three-liter jar and pour 1— 1.5 liters of water, close lid tightly with varnum pipe to which two sides advance tensioned segments of thin-walled elastic hose (pharmaceutical rubber or a PVC tube). The provisioned capacity is fixed horizontally at the top of the greenhouse. Coming out the end of a long segment of hose connector is lowered into a quart jar. Have latest not inside greenhouse, and a kind of continuation of the transoms (air vents), with a rectangular frame (made from steel angle), which is provided with a counterweight.

Initially in a quart jar, the cavity must communicate with the outer air, pour a little water and the working fluid as small as possible has evaporated, put the lid with two openings: one is passed through the hose connector, the other is free (the system must, in accordance with the algorithm to “breathe”). Rotation of the lever prudent limit near hammered a stake.

The increase in air temperature in the greenhouse leads to the expansion of air and working fluid (water) in three-liter jar. In addition, the part of the liquid evaporates. The resulting (and expanding!) the steam-air mixture pressure on the remaining water. The last tube begins to flow into the quart jar on the outside of the greenhouse. This water when the critical mass turns the lever, opening the transom (the window).

By lowering the air temperature in the greenhouse, the volume of vapor-air mixtures in three-liter jar decreases. Here the pressure falls below atmospheric, and this creates a suction effect. Water from the outer receptacle is drawn into the one that is inside the greenhouse. Litre capacity is emptied, the pressure on the frame of the counterweight is reduced, he gets up, and the transom (the window) closes the greenhouse.

But biofuels is working, fueling the internal cavity of the greenhouse. And as soon as the temperature exceeds the required value, re-start the process of water displacement of three-liter jars of air-vapor mixture. Mechanical system avtobronetehnika greenhouse will continue tracking its configured setting.