New racing car was designed on the base of the machine, the drawings and description of which was published in the “M-K” № 11 in 1986. It is considered to be a design boon for most young athletes involved in kordovye micro machines, and as we see it, only this scheme is able today to give the boys access to high sports results without the involvement of technology, completely made by hands of experienced craftsmen.
We constructed two identical racing through the drawings log. Both “ran” very well, not showing any whims, even on poor tracks. Resistance of movement of the unsprung machines to convince us of the rightness of the arguments about the effect of vibration on the grip of the wheels with the track, so the basic signs circuit “Vyatka” were transferred to the new model.
And changed this. First of all, reduced dimensions; base with 230 mm was reduced to 170 mm. due to this, managed to move from the power of the dural plate thickness of 5-6 mm to the steel nine-millimeter! Weight past after you cut the window in the rear — in the range of 350-400 g, and the main square and the weight concentrated in the area of the plant and is now no longer “smeared” along the length of the model. The engine is mounted on a strong heavy base that not only improves the conditions of work (light, flexible Motorama neobetonirovannymi the engine can lose due to vibration up to 30% power!), but is also almost complete cessation of the transmission of vibration to the wheel! But if you still remember the conversation about the benefits nezaboravnog engine with a horizontal cylinder axis, it becomes clear that now the path will be not trying to cling to the wheels over the asphalt, “shaker”, a normal moving speed model. To completely eliminate the effect of vibration on the clutch, new racing increased and the mass of the hub-flywheel, the inertia of which makes uniform rotation of the drive wheels.
In the sense of resistance against the “guapiruvu” even rough terrains cord was out of competition compared with other schemes. The main thing — do not introduce any damping elements in the suspension in the rear (driven) wheels. Then, in this scheme they will be constantly pressed to the track some force, the reactive torque from operation of the engine, and hitting the small bumps will not lead to a buildup of the body. Unlike the original version of the track of the rear wheels, we have reduced to a minimum. Due to the fact that the center of gravity of the model is very close to the axis of the drive wheels, the main influence on lateral stability is having their track. To meet the requirements of the rules on normal standing model without attached cords at the side position of the engine is a snap. 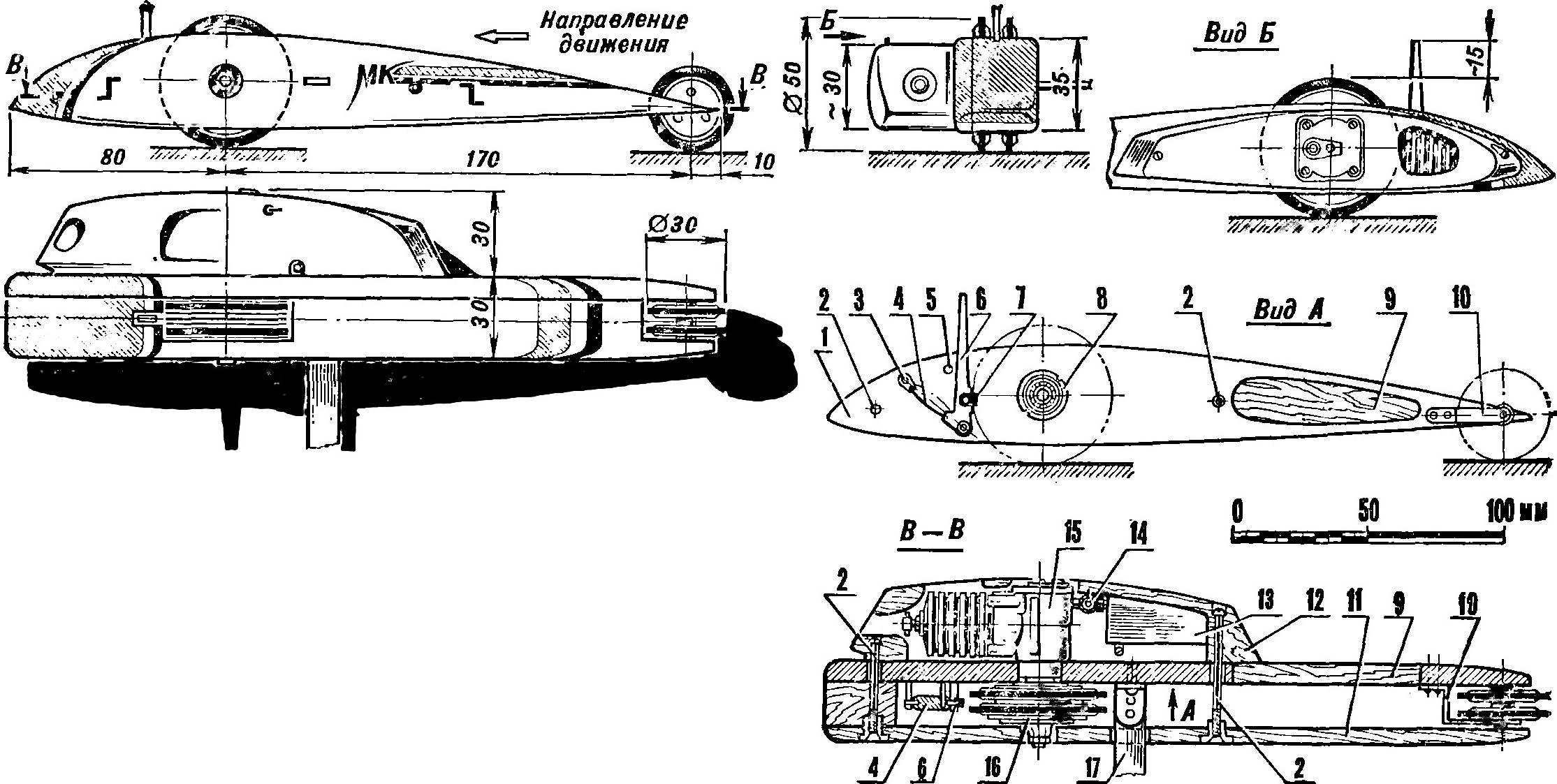 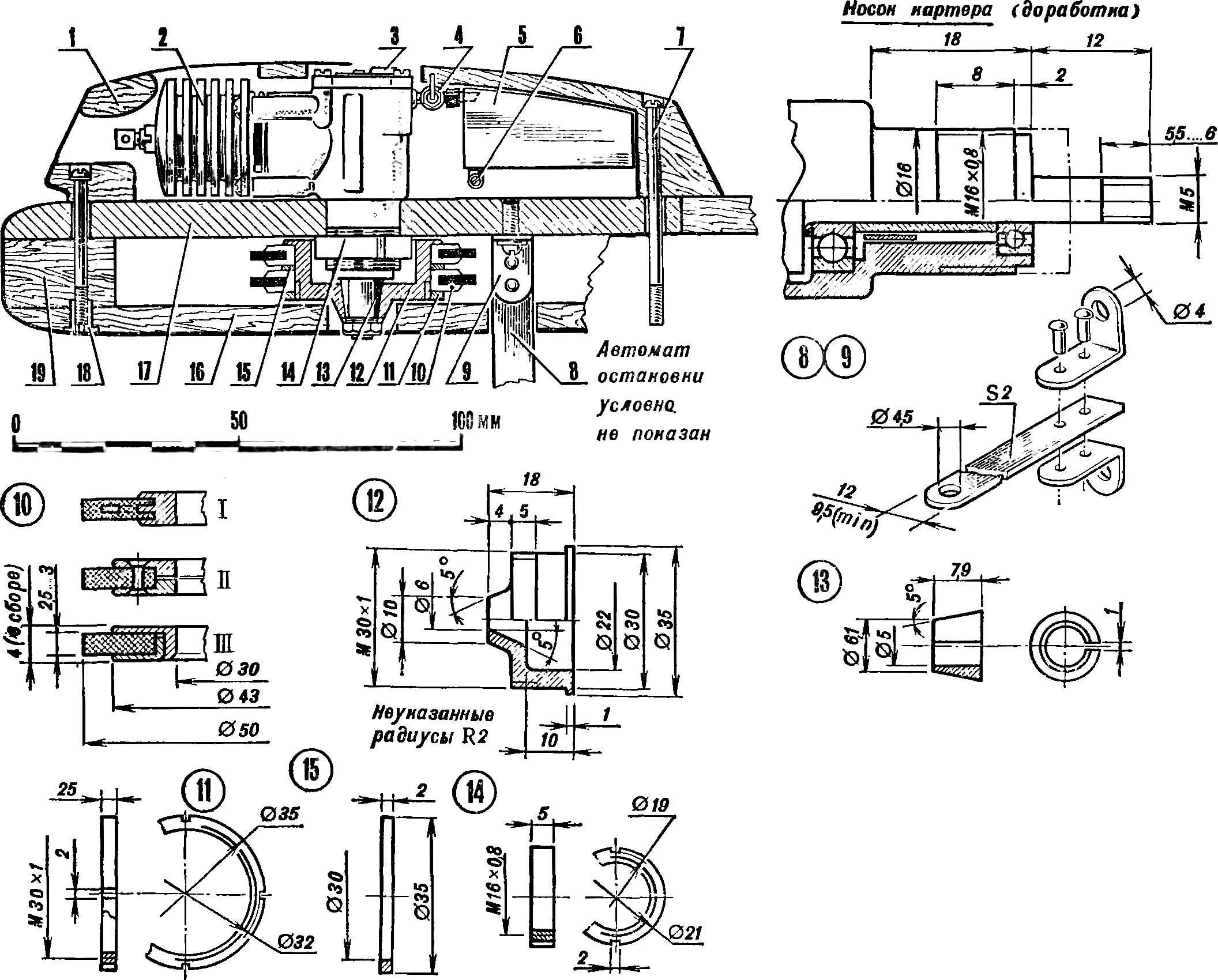 The power part of the model:
1 — the fairing of the power plant, 2 — modified engine MK-17, 3 — overlay threaded carburetor, 4 — nozzle, 5 — fuel tank 6 — fuel-drain tube 7 — M3 screw fixing fairings, 8 — cord strap (steel thickness 2 mm), 9 — angle (steel) 10 — driving wheel, 11 — notched nut (steel), 12 — wheel hub (steel), 13 — split cone (bronze), 14 — nut engine mounts (steel) 15 — spacer (steel), 16 — wall of the fairing (birch, Linden 6 mm), 17 — strength plate (steel), 18 — “mushroom”-nut M3, 19 — Central part of the fairing (birch, Linden, 15 mm thick).
The crankshaft of the engine is modified in accordance with the publication “M-K” № 12 in 1987. It should be noted that a slice of material from the cheek of the crank is very useful for models of type “Vyatka”. As a result of such “balancing” is balanced by only the crank pin and part of rod that is required for complete cessation of the transmission of vibration to the model in the vertical direction. How to finish the toe of the engine, is clear from the drawings. The advantage of our variant we consider the use of spacers between the ball bearings, which makes harder the crankshaft and clearly fixes it in the axial direction. The thread on the shaft end is ground, and to seal the toe of the crankcase in the bore is fixed with Teflon liner, having on the working surface of the dead of the threaded groove. After Assembly, the entire Assembly is checked for ease of rotation of the shaft and the absence of wobbling of the hub with the wheels (the last detail, of course, previously carefully balance). The cylinder liner is processed below the Windows for the formation of passageways to a depth of 0.7 mm, shortened the skirt and outside of the filing on the cone. Mirror casings useful to grind and otherout with subsequent grinding. Although MK-17 littered with the sleeve and have a longer lifespan, yet difficult improvement detail better to make a long (shaft is easier to change). The finished machined sleeve is fixed to the outside of the cooling jacket of “hot”, using the wrapper of aluminum foil with a thickness of 15 µm (baking foil), which significantly improves the thermal mode of forced engine. Spool after milling a new hole for the crank pin carefully balance, and the rear wall being finalized in accordance with the publications of the journal (No. 12 in 1987 and 6 in 1988). Homemade jet set as shown in figure 3 in No. 3. The inlet of the carb in the rear reamed to Ø 6 mm and glued short dural tube, performing the role of futorki. The living section of the carb about 12 mm2. Final Assembly of the jet is made using epoxy resin.
It should be noted that the resulting all alterations and improvements to the engine according to the nature of the work are quite similar to the original MK-17. The stability of the regime and considerable power characterize these new models. Even when you are not using a resonant exhaust pipe, the speed of the model with such engines 200 km/h is not science fiction. Therefore, such a race model can be recommended for young athletes, age crossed the frontier “school” competitions. In some cases, especially in hot weather, adult athletes, exploiting their micromachines compression engines, we recommend you to enter in the composition of the fuel mixture from 5 to 10% methanol along with other well-known additives. Despite several published comments that the contact with glow fuel in a diesel leads the latter into complete disrepair, still try to make it! According to our observations, slightly worse start, but it is more than block the increase of power and rapidity of the motor. Another important factor is the effect of the internal cooling working MK-17 evaporating methanol, which is even with such a small content in the fuel has almost the same effect as all the other components combined.
V. NOVIKOV, candidate of master of sports