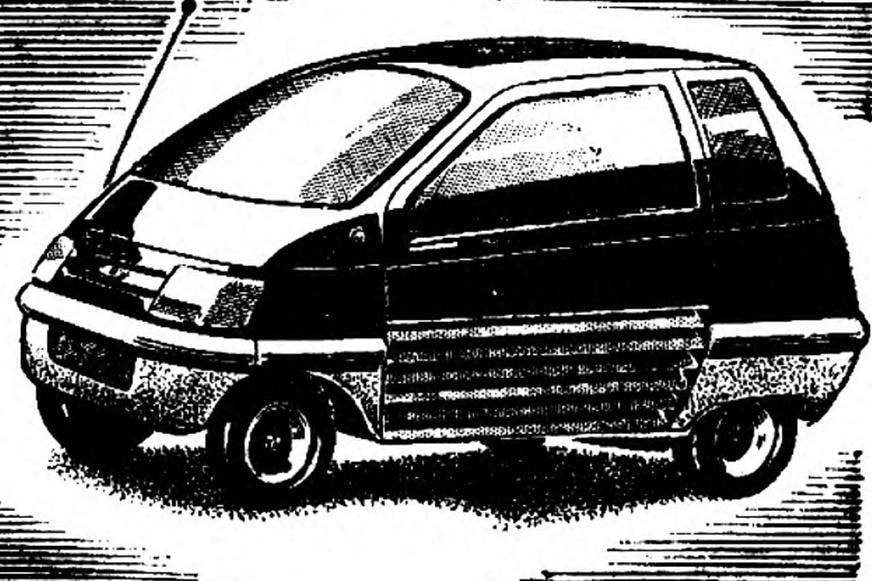 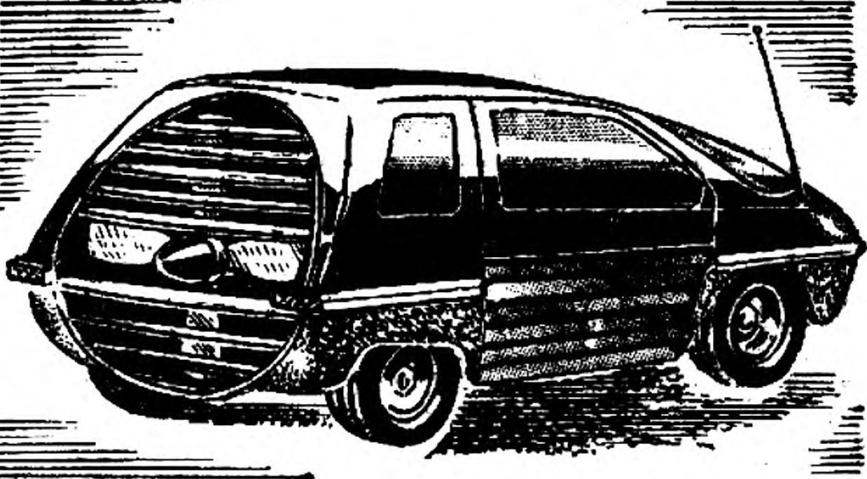 High speed car with remote control and internal combustion engine for twelve year old boys? I will say, this is not serious? The creation of such machines is the “aerobatics” automodelisme available Only to qualified athletes? And then teenagers…
All this is true, but the model which I want you to tell designed it is still a poor experience of young athletes. And easy EV was ordained mainly due to the absence of a mechanical drive with a lot of precision parts, gears, universal joints, bearing assemblies. Instead, the model is applied to aredigital that became usual in Winter and summer “vertullo”. Developed for this machine and the special simple dvuhkomnatnaya radio remote controls. In principle, it is possible to install and serial equipment type “Suponer” or “Novapro”. It was with this model in our drawings.
So, high speed RC car for beginners. Although the tasks make her a copy of the existing vehicles is not compromised, the body is executed “based on” convenient from the point of view of the host model aredigital prototype “Ford-Chia”. Modern wedge silhouettes give a wide scope for the selection standard — fits a motor with a propeller Ø 140-150 mm, and the distortion of the aft of the car are minimal.
The first factor in this model was the diameter of the propeller in conjunction with the dimensions of micro internal combustion engines. Preliminary calculations showed that to make a propeller with a diameter less than 140 mm not make sense, because it does not provide optimal loading of the compression engine KMD-2,5. Yes, and one screw Ø 140 mm was not enough, so the crankshaft was installed two propeller — offset by 90°. As it turned out, a fairly simple “chetyrehlistnyj” creates a static thrust of about one kilogram, which is enough for dynamic acceleration and achievement on straight sections of track and high speeds. 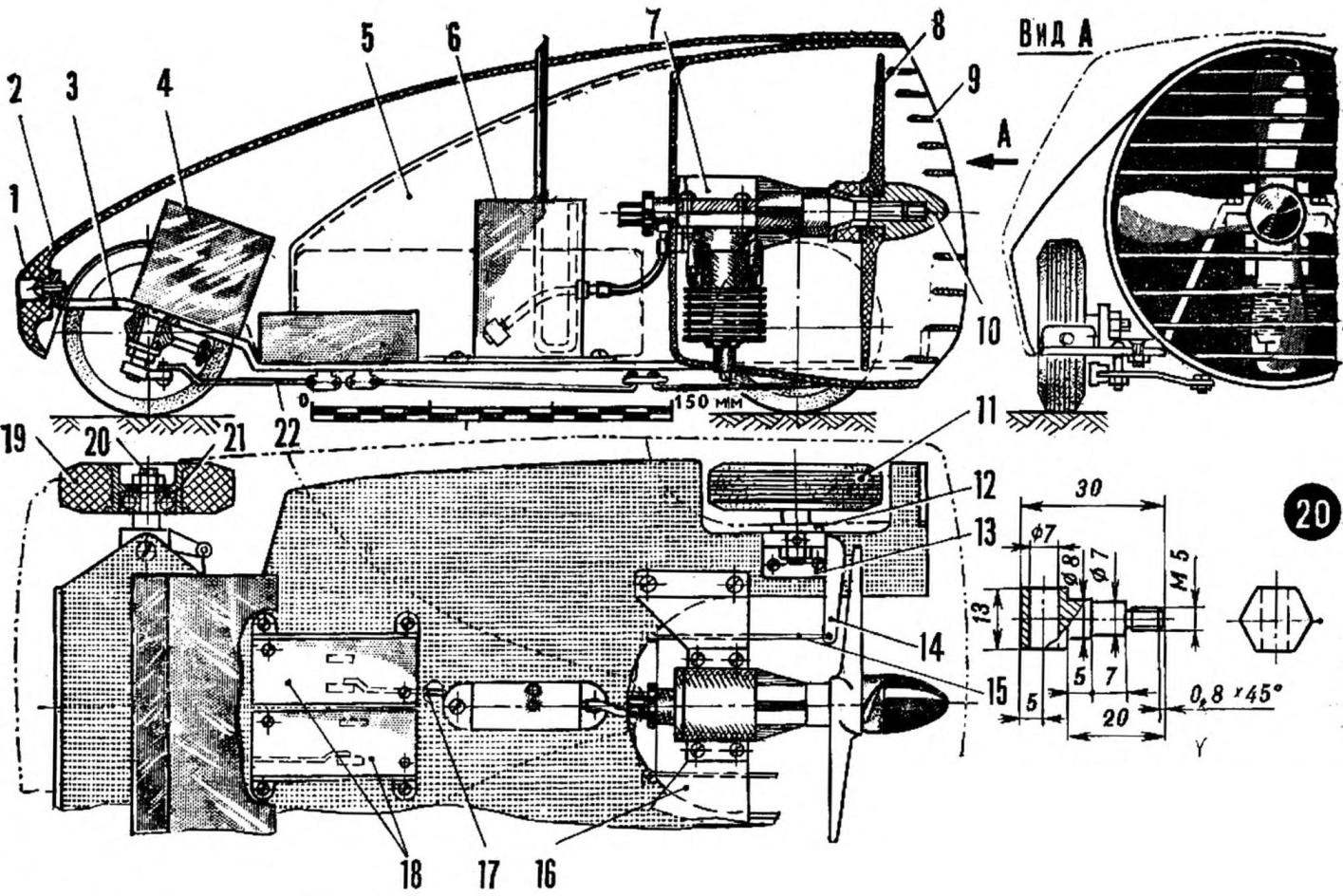 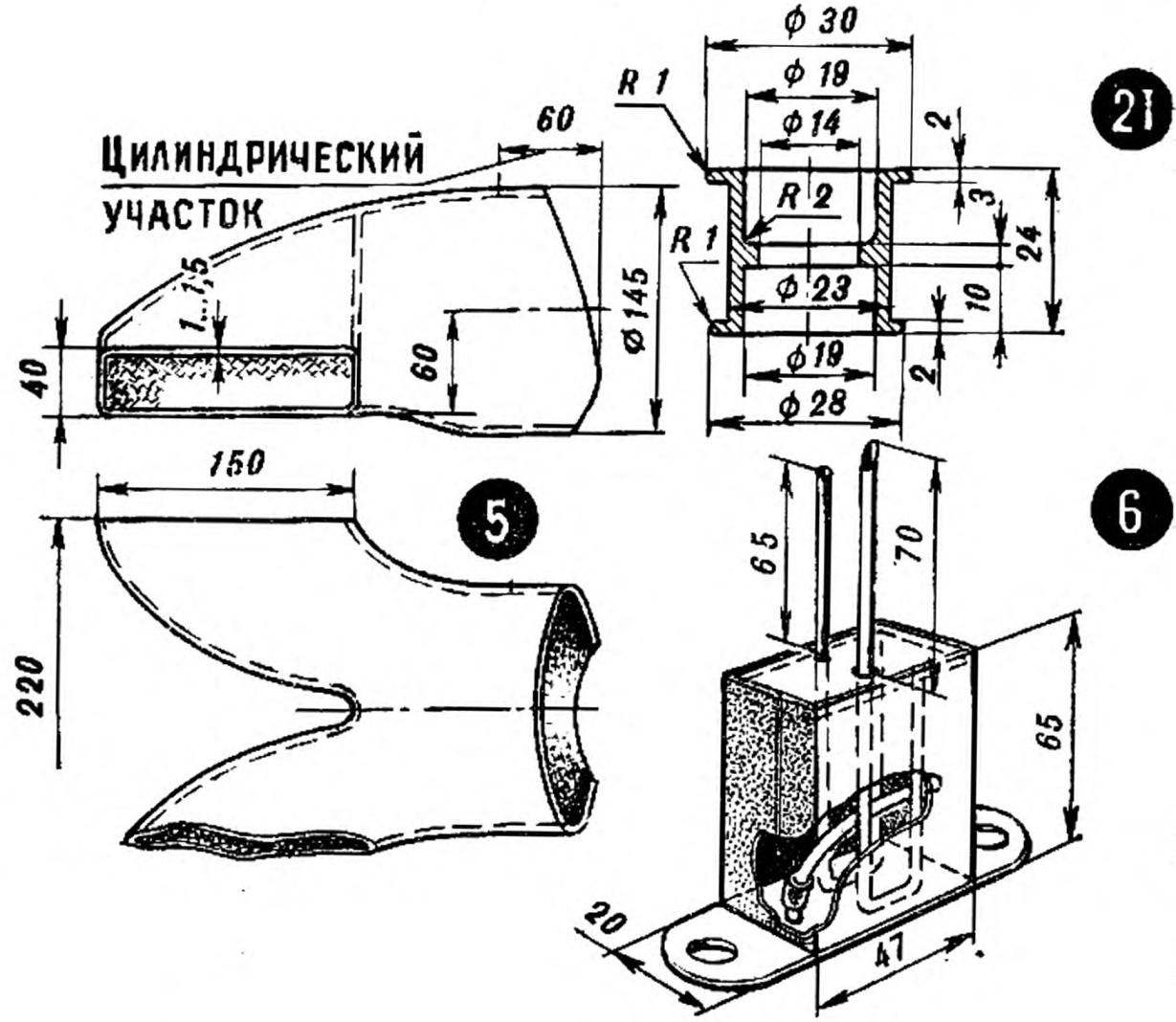 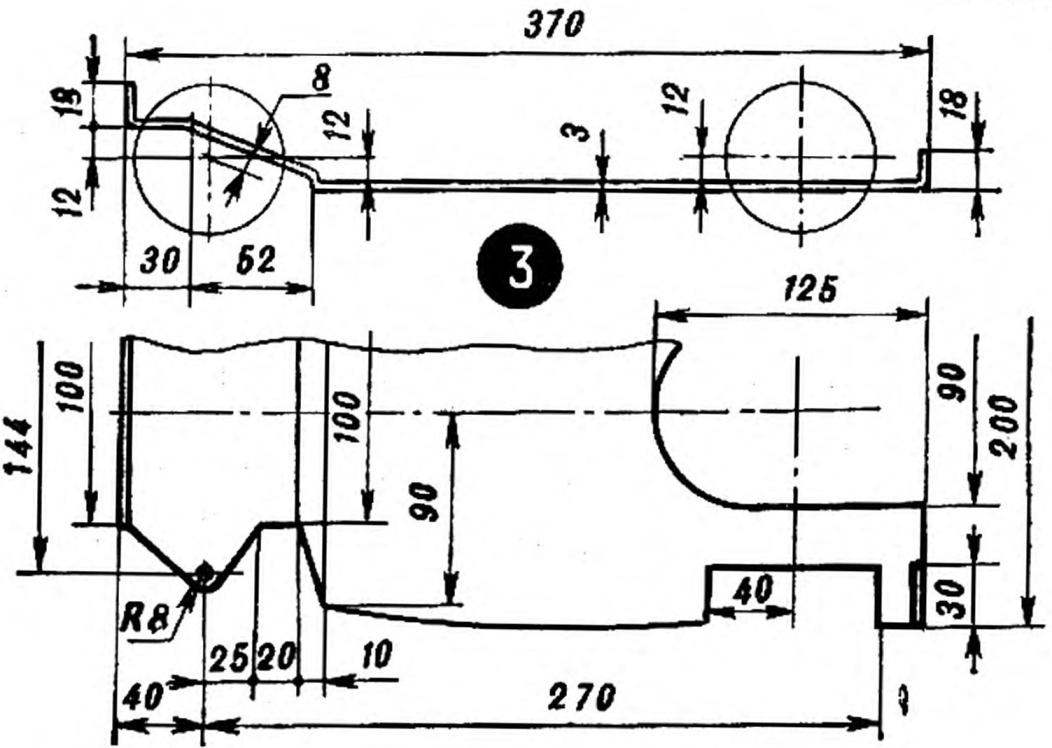 High speed RC car with aredigital:
1 — the screw of fastening of the body 2 — body (fiberglass), 3 — engine mount (aluminum Д16АМ, 2.5 mm thick), 4 — receiver, 5 — channel-the duct (GRP), 6 — fuel tank (sheet thickness 0.3 mm), 7 — the engine KMD-2,5, 8 — propeller, 9 — blinds (made of anodized aluminum 1 mm thick), 10 — spinner, 11 — rear wheel 12, the brake Shoe (PCB), 13 — bracket rear wheel (“area”, D16T), 14 — brake lever, 15 — brake pull, 16 — motor mount (duralumin D16T with a thickness of 2.5 mm), 17 — thrust equalizer, 18 — servos, 19 — bus (foam rubber), 20 — pin, 21 — hub (D16T), 22 — tie-rod.
When linking models for a given propeller immediately decided the base of the machine is 270 mm and gauge — 200 mm for wheel diameter of 70 mm. air intake for aerodigestive arranged through the side wall of the body corresponding to the door panels of the prototype. To friction losses in the air tract was minimal inside the body is a fiberglass shell.
The chassis of the car is a pan cut and bent out of aluminum three millimeters thick brand Д16АМ. It strengthens: the front axle, the angle brackets of the rear wheels, motor, receiver, servos, power supplies, and duct and fiberglass hull.
Front axle. First of all on the pallet — based models, are mounted two-axis rotatable axles, each of them consists of four millimeter bolt, cut brass tube in the morning Ø 4 mm, two washers and nut. The rotary axle is easiest to make two steel bolts with hexagonal heads as they modify, as shown on the drawings. Before Assembly, don’t forget to bend the front part of the tray at 8-10° up. Transverse thrust — wire, steel OVS. Bend each in the middle part necessitated by the configuration of the steering mechanism and the steering protection of the machine from shock loads encountered during the assaults on obstacles. Fixing rods on the levers — washers soldered part of the PIC 40.
Wheels. Their hubs are turned, material — D16T. Each of them rotates on the bearing with inner Ø 7 mm, outside 19 mm and a width of 7 mm. the Bus turned the foam on the hub it is attached with glue 88Н. Tread — straight longitudinal grooves. The front wheels are interchangeable with the rear.
Motor mount is curved of the two aluminum strips with a thickness of 2.5 mm and is attached to the base by screws with thread M3. The same screws are held in place by the micro KMD-2,5.
The body is laminated on the foam, brought the clay to the required shape of the disc. Vileika runs of annealed fiberglass and epoxy resin, the shell thickness is 2-3 mm. After curing of the resin sheath is cut on top and bottom — otherwise remove it from the discs will be simply impossible.
The channel duct is also of fiberglass, is laminated on the blank of cardboard and plaster (or clay). After vyklicky it is easy to break and the parts extracted from the shell.
The output of the cylindrical part of the duct with protective grating type “blinds”. Such a closed grille and side air intakes.
Brake — lever type. Braking force by using thrust transferred from the steering machine on equalizer, and then to the two brake levers. Pads on them — textolite, swivel.
The fuel tank is soldered tin. Since the engine is on the model of the cylinder down, which complicates the fuel supply; the fuel standpipe tube runs of PVC “cambrica” with nut-sinker at its free end. Drainage and filling tube, curved, as shown, provide for the operation of the tank in any position of the model.
Control is reduced to the manipulation of the front wheels (directional) and rear brakes. After starting and warming up the engine output to the maximum rpm, brake clamp rear wheel and set the model on the track. Then release the brake and begin an intensive crackdown. At the approach to the turn braking should be started sooner than in the model with the traditional mechanical drive, because the engine thrust is always constant. Of course, you can blokirovat control-gas engine drive brakes, using the recommendations for alteration of carburetor the engine KMD-2,5 (“M-K” № 1, 1984), however, at first, better not to do so is to set up such a combined control is not so easy.
We appeal to the leaders of self-similar groups asking for feedback on the constructed models of this type, recommendations for improving their design. I hope that over time, using the most interesting proposals, we will apply again to similar models is a relatively simple high-speed RC.
V. DOLGOV, master of sports of the USSR