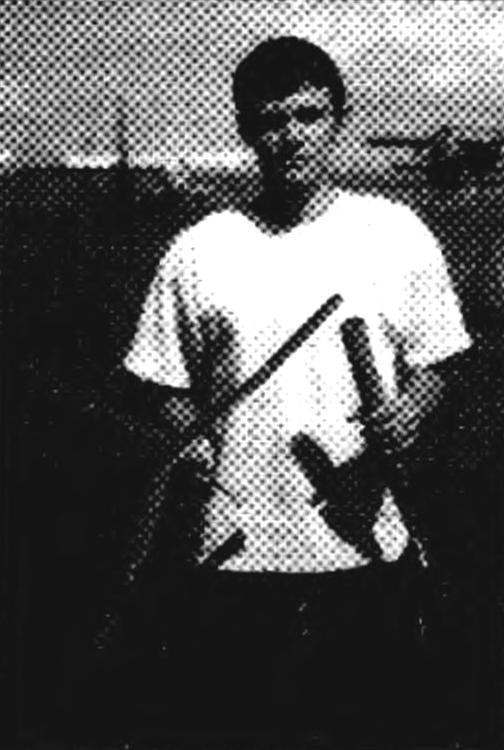 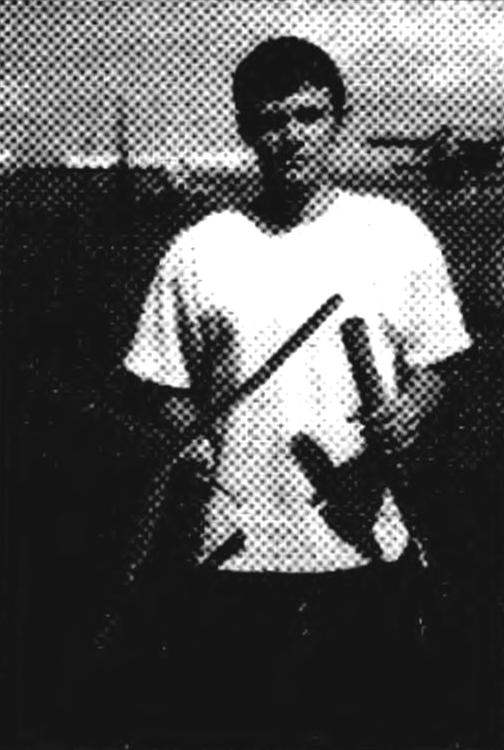 The name of the athlete rakatomalala Igor Ponomarev, that is, “hearing” and “rocket scientists” and, hopefully, our readers. His technical model development are of genuine interest. For the very same designer search new is the way of athletic perfection, which is especially important for the future of aeronautical engineer (today Igor is a student of Moscow aviation Institute). I guess this is a good example for our young readers.
Our magazine has repeatedly described the construction of its models (see “M-K” № 8.2003; No. 6.2004). In our opinion, will be of interest to modelers and offer today the development of rotachute class S9B.
A distinctive feature of the model of rotachute I. Ponomareva — simplicity and accessibility. This is especially important today, when I changed the technical requirements for missile models — minimum diameter — 40 mm. for models as adult athletes and young men. In the manufacture of new sports equipment will increase the consumption of expensive material— fiberglass. I believe that the example I. Ponomareva, and more specifically the proposed technology will provide good service to many “rocket scientists”.
Media rotachute — container made of paper (density 80 g/m2) made of three elements: one conical and two cylindrical. Basic cylinder length 275 mm glued on a mandrel of 40 mm, a tail length of 59 mm on the mandrel with a diameter of 10.2 mm. Between both cylinders are connected by a cone with a length of 125 mm. the narrow part on a length of 40 mm made of two layers. Bonding elements overlapping, the width of the belt is about 4 mm. the Finished hull is covered on the outside with four coats of nitro lacquer. Its weight is 6.5 g.
Feathers stabilizers (three of them) cut from a balsa plate thickness 0.9 mm. the lateral surface is reinforced with paper and coated with nitrocellulose lacquer. To the body of the engine compartment stabilizers are glued back to back. Along one of them reinforced epoxy retainer MRD length 72 mm, curved made of steel wire with a diameter of 0.5 mm. To him also glued the thread of suspension of the rotor is made of Kevlar. 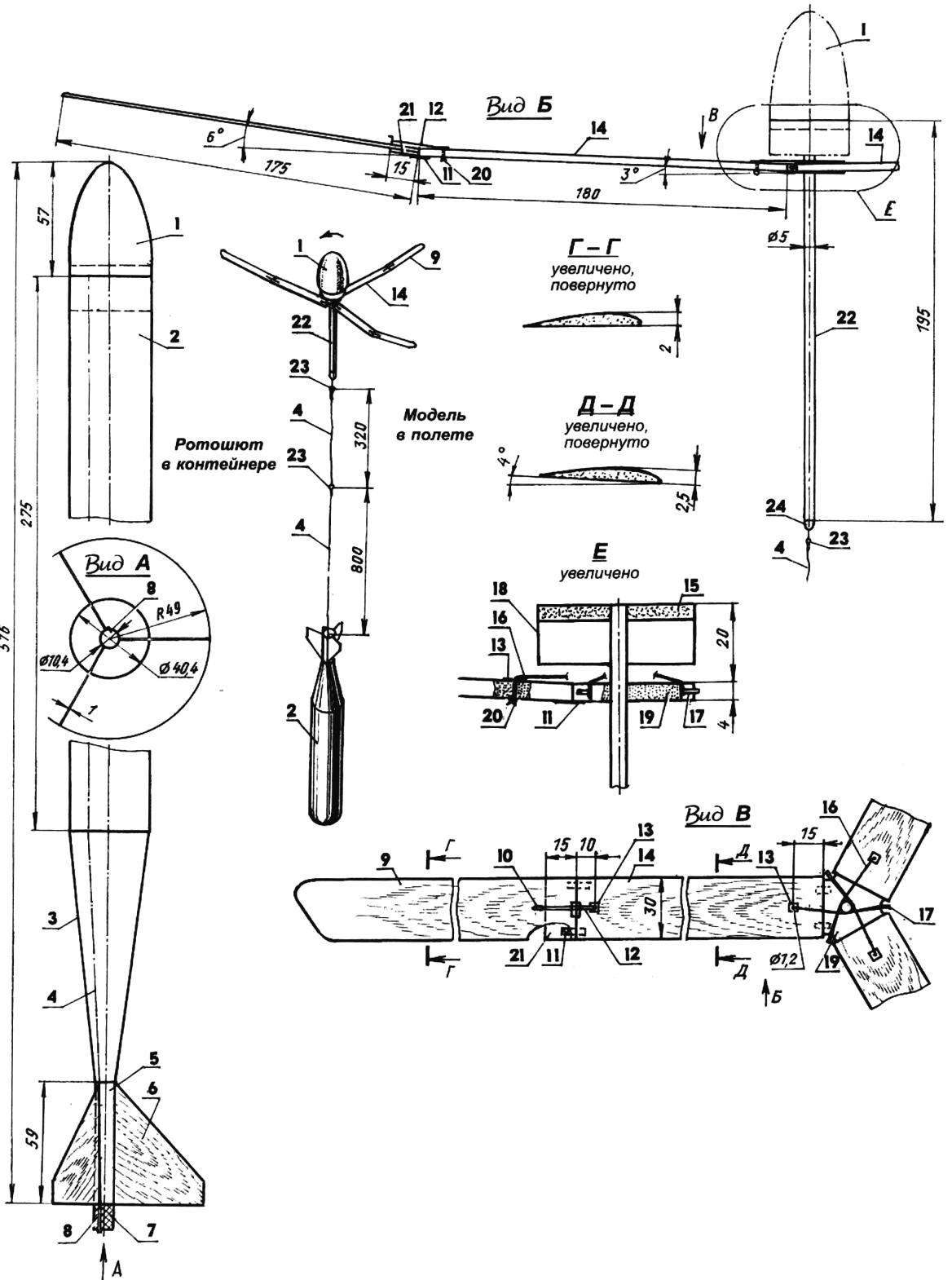 Model rotocut class S9B champion 2004 I. Ponomarev:
1 — fairing (polystyrene); 2 — body; 3 — tail cone; 4 — thread pendants (Kevlar); 5 — engine compartment; 6 — stabilizer (balsa s0,9 paper, 3 pieces); 7 — MRD; 8 — retainer MRD (steel wire Ø0,5); 9 console of the blade (balsa s2, 3 pieces); 10 — hook; 11 — joint (nylon); 12 — elastic return (3 pieces); 13 — strengthening (overlay, 12). 14 — root part of the blade (balsa s2,5, 3). 15 — frame connecting sleeve (balsa); 16— elastic disclosure (3). 17 — pin for gum; 18 — a connecting sleeve (polystyrene); 19 — prism (balsa); 20 — node stop; 21 — “biscuit” (balsa); 22 — rod (fiberglass, pipe Ø5); 23 — the bearing (vertloc, 2); 24 — boss (Linden); material children.2, 3, 5 — paper weight 80 g/m2
Carrier element model a three-bladed rotor. Blade width 30 mm — folding of two parts: the root — length of 180 mm and a thickness of 2.5 and cantilever length of 175 mm and a thickness of 2 mm. the Profile is PLANO-convex. After treatment the blade is covered with two layers of lacquer and painted in a bright color. The installation angle of the root part — negative (4°), console — 0°. By the way, is one of the differences of this model from all the known designs category S9.
Swivel the root and console parts blade is a strip of nylon fabric with a width of 10 mm pasted on the lower planes. To align the plane of its gluing (because of the difference of the angle) at the cantilever part of the bottom glued “biscuit” — the balsa wedge with a width of 15 mm. On the upper plane of the fixed console, the hook for the elastic return. Its other end is passed through the hole in the root portion and is fixed from below the ordinary knot.
The hub of the rotor consists of a rod and fixed thereto prism. The rod is made of fiberglass tube with a diameter of 5 mm and a length of 195 mm. At its upper end, at a distance of 20 mm from the edge of the reinforced prism, and on the edge of the frame coupling sleeves.
Prism is an equilateral triangle balsa thickness 4 mm. In its tops are made shaped cutouts in the middle of which is glued the pins for the rubber bands disclosure. The faces of the prism are mated with the ends of the blades. Using nylon hinges glued on the bottom, they are connected to prism. At a distance of 15 mm from the edge of the blade (the root part)drilled hole diameter 1.2 mm, through which is passed the elastic of the disclosure.
The frame is glued on the connecting sleeve, and the top fits over the fairing. And sleeve, and the fairing is molded from polystyrene is a packaging material of food.
In the lower end of the rod affixed to the boss of lime, in which is fixed a bearing (fishing vertljuzhok). To the free end of vertushka tie the thread suspension.
The model preparation for the launch is carried out in the following order. First of all put the engine while checking the reliability of its fixation. Then folded cantilever elements to root and put the folded blades along the shaft. In a medium (container) put a wad (paper cylinder with a length of 35 mm with plug), between the folded blades place the thread pendants, pre-wrapped in case of ftoroplastov film and placed inside the rotor.
The mass of rotachute I. Ponomareva without MRD — 23