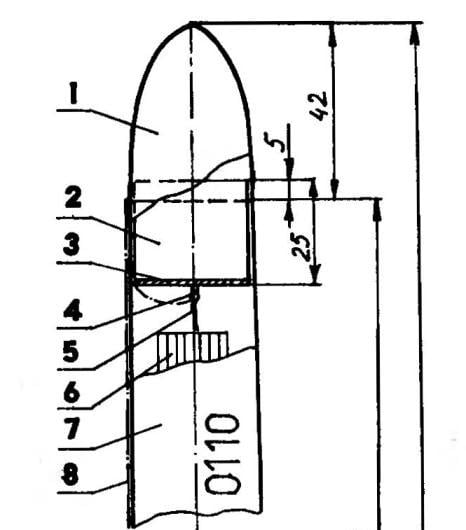 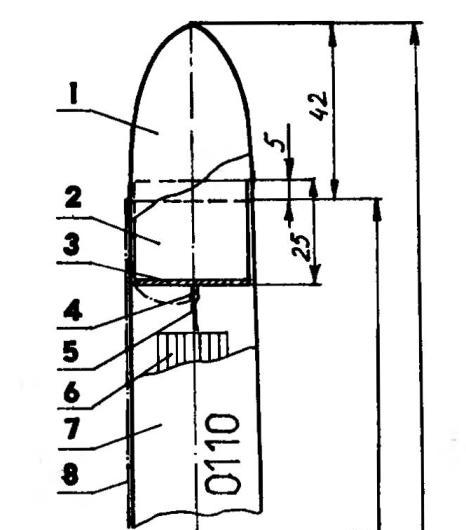 Before talking about the first rocket model, a few words about its designer — Alexander Tarasov. He lives in a small Siberian town of Yugorsk (Tyumen oblast), employs a facilitator Fock firm “Tyumentransgaz”. More than ten years, rocketmodeler Yugorsk perform successfully in competitions of all levels. His son Alex was the winner of the Cup “Alex” 2001, and other graduate — V. Pirogov became the owner of the same Cup in 2002, winners of the Championships of Russia there were many students Tarasova.
The proposed model missiles S6B — recent development of the designer. Because this class of sports models, only the second year won the right to “citizenship” at the Championships.
The hull is molded as a single unit on a single mandrel with the largest diameter
39,9 mm. Thickness used fiberglass — 0.03 mm, the winding is in two layers. Before forming the annealed fiberglass and the mandrel is slightly warmed and smeared with mastic separation (“Edelvika”). In order to avoid air bubbles between layers when rolling still raw billet wrap tape tape width 10 — 12 mm and placed in a drying Cabinet with a temperature of 60 — 70 °C.
After drying, the resin obtained in preparation process a file. Then clamped in the Chuck of the lathe, — abrasive paper. Then cut ostrozatochennym cutter the desired length.

A model rocket class S3B of the champion of Russia 2002, Ilya Repin (G. Uray):
1 — fairing; 2 — connecting sleeve; 3 — frame bushing; 4 — thread suspension of the case; 5 — thread attachment of a parachute; 6 — parachute; 7 — housing; 8 — wad; 9 — tail cone; 10 — stabilizer (3). 11 — emphasis (latch) MRD
Stabilizers cut from the treated and reinforced fiberglass balsa plate with 0.5 mm thickness. In the package (for 3 PCs) brought the contour to the desired shape and attach the butt to the motor compartment of the housing. One of the stabilizers, pre-wound threads with resin bonded retainer MRD — cut the wire, allied with a diameter of 0.8 mm with bent and exposed for the slice of the body by 6 — 7 mm end. Another stabilizer is attached to the thread of the suspension.
Fairing with a slightly rounded top (radius of curvature 9 mm) were molded analogously to the case. Coupling sleeve—cut fiberglass tube with a length of 35 mm with an outer diameter
39.9 mm — glued one end to the lower part (skirt) of the fairing. At the other end of the sleeve glued to the balsa frame with loop, attached to a thread suspension. It is tied and the thread fastening the brake band.
Streamer (brake band) — sizes 1550×150 m — rigid Mylar film with a thickness of 0,024 — 0,03 mm.
The mass of the model without MRD and the brake band 7.
A model rocket class S3B Ilya Repin (Urai uriman) conditionally can be attributed to the representatives of the so-called “Ural school” rakotondravony. One of the signs — the length of the tail is about one third of the total length of the model that facilitates exactly the lower part of it.
Body (cylindrical and conical elements) fabricated on the same mandrel with the largest diameter 40 mm and the smallest 10.1 mm molded from fiberglass with the resin. Thickness 0,03 mm. fiberglass Binder is polyester resin. After drying (curing) of resin body processed on the mandrel clamped in the Chuck of the lathe, and othertown length. Then placed in a drying Cabinet, slightly heated and removed from the mandrel.
Similarly glued and fairing of fiberglass with a thickness of 0.03 mm on a metal mandrel arched form. The connecting bushing with a length of 40 mm formed on the mandrel with a diameter of 39.8 mm. After processing it is glued to the skirt of the head fairing to a depth of 10 mm, the glueing of pre-degreased, not-frustum A-130.
Stabilizers (three of them) cut from a balsa plate of 0.5 mm thickness, reinforced with fiberglass and attached butt to the engine Bay corps — cone. One of the stabilizers glued Kevlar thread suspension package and system recovery. Yet another wire attached clip, pre-wrapped its threads. The clip is a retainer MRD from his spontaneous shooting when triggered, expelling charge.
The dome of a parachute with a diameter of 740 mm is made of a metalized Mylar film with a thickness of 3 microns.
The mass of the model without MRD and parachute of 5.3 g is used For starting the engine A-1-5.
Rakatomalala Igor Ponomarev of the Moscow city Dubna can be referred to reliable and stable athletes. For five years in all competitions he invariably becomes or the winner or the winner. Especially successful for him was the last sports season. Igor became the champion of Russia among young men and medalist of the world championship. And wherever he spoke, his models always original both structurally and technologically. This was the case during his performances at the school competition, and today, when he is the student of Moscow aviation Institute — competing in the youth age group. It sports the “shell” is quite interesting for athletes missile.

The model at the final stage of the flight:
1 — canopy; 2 — thread attachment of a parachute; 3 — fairing; 4 — thread suspension of the case; 5 — case
Paper model (paper copier, density 80 g/m2) consists of three elements: two cylindrical and one conical. Basic cylinder length 186 mm glued on a mandrel with a diameter of 30 mm, tail length 43 — 45 mm on the mandrel with a diameter of 10.2 mm. Between the cylinders are connected by a cone with a length of 95 mm. Gluing the overlap, the width of the belt with about 4 mm. the Finished hull is covered with four layers of nitrocellulose lacquer (Amalita). It weighs 3.5 g
Feathers stabilizers (four of them) are made of balsa veneer 0.6 mm thick. Their lateral surfaces are covered with long-fiber paper and covered with Amalita. To the body the feathers are attached at the butt. One of the stabilizers glued cap (retainer) MRD, curved steel wire with a diameter of 0.6 mm. And to diametrically opposite stabilizer glued the thread of the suspension system of salvation.
Fairing extruded polystyrene is a packaging material for food products. The top is spherical.
Of the same material are made and a coupling sleeve which is glued into the cone. At the end of the sleeve is fixed to the frame with a loop for thread suspension.
Brake band — from the printing of polyester with a thickness of 0.03 mm, the size of its 1250×110 mm, blow accordion with variable pitch from 20 to 40 mm. weight of the model without the streamer and MRD of about 4.5 g. Starts a mini-rocket engine – “Mirage” And is 1.7-8 (designed by I. Kryukova) from the launcher a “Cap”.
V. ROZHKOV