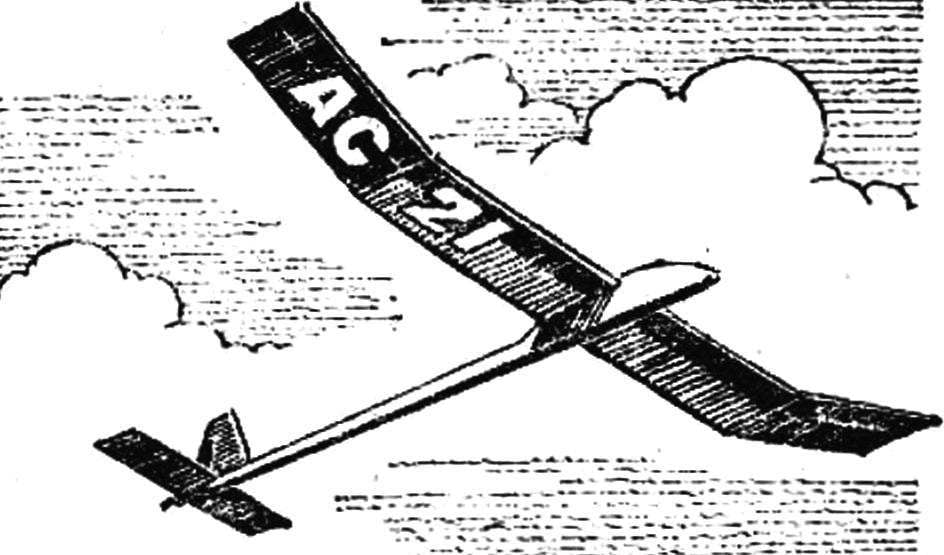 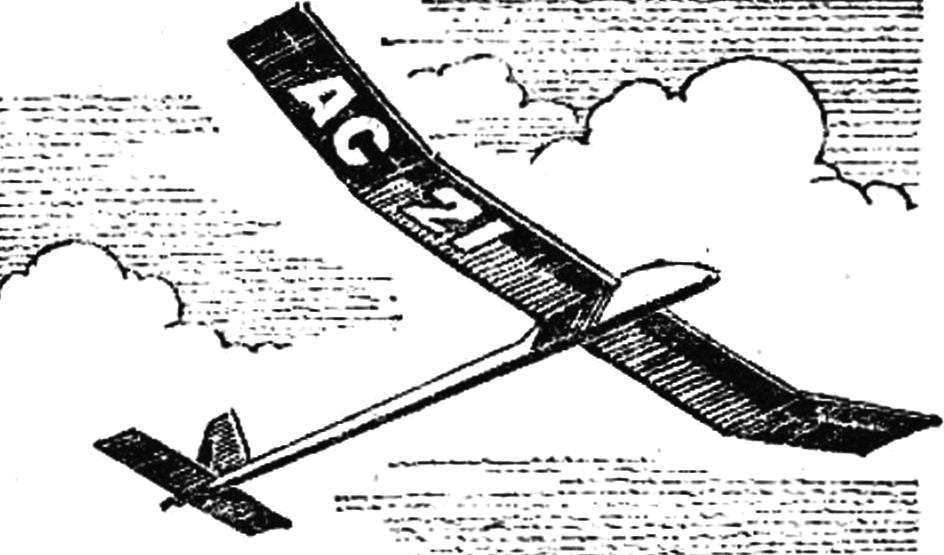 The unusual design of bearing areas — that is the main distinguishing feature of the proposed model glider. Their advantage in ease of manufacture. The absence of cut from the sheet material of the ribs removes one of the major obstacles that usually stand in front of budding aeromodellers. Not once, not twice inexperienced hands of guys spoil tutu scarce mm plywood until it become satisfactory in quality ribs. And propilivanie grooves under the rail spars, stringers and edges too rarely at first. And the quality of the execution of this work depends on the strength, stiffness, and aerodynamic characteristics of the future model.

Finally, the stage as a relief of ribs. It would seem that what is easier: Yes drank drank. In fact, students who don’t too often hold the jig saw in hand, it is here that spoil the greatest number of blanks.
To make the wing rigid, technologically advanced and easy allows the transition to cross a set of pine slats. In fact the proportion of pine is almost two times less than plywood. Another advantage of eliminating the need for relief: Reiki, forming a kind of rib, just pass around the perimeter of the profile. Cross set of slats by weight is only 11 grams! And the bad collect that wing difficult if to take advantage of the sequence of the gluing frame.
And the last argument in favor of this wing. Will there be satisfactory flight characteristics of the glider? Because the resulting after covering the wing profile is not very similar to the currently used. A definite answer to the skeptics give the results of the tests. In the absence of thermal updrafts, the glider model A1 with similar wings held in the air for about 105!
And now about the design of the model. 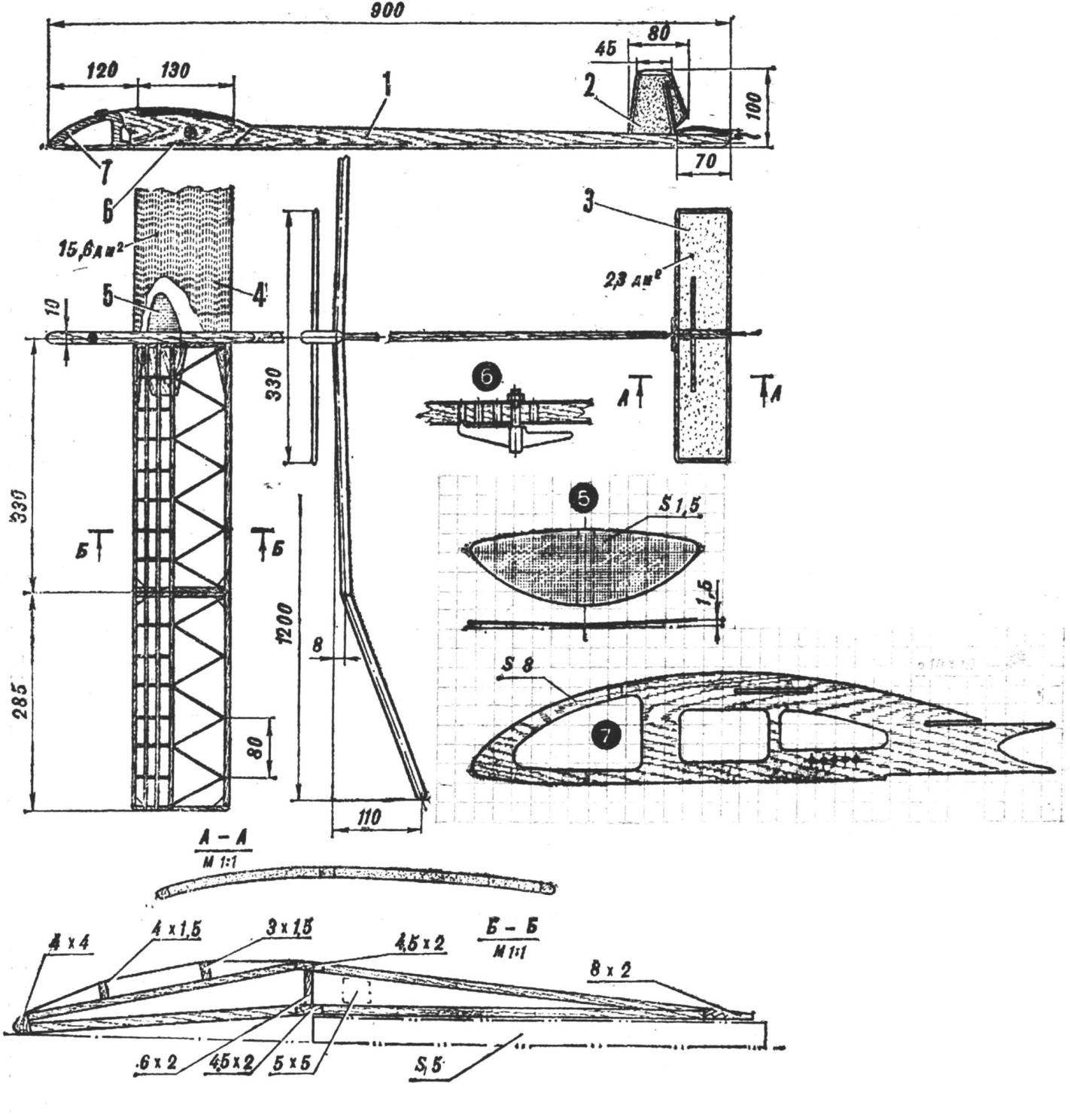 Glider class A1:
1 — fuselage 2 — the keel 3 — regulator, 4 — wing, 5 — language 6 — the start-up hook, 7 — plate front part of the fuselage.
The FUSELAGE is assembled from two parts. The front is a fake (fit and poplar) a plate thickness of 8 mm. Carefully cut holes in it under the tongue, the load and rack the rear fuselage, and then treat the workpiece at the outer contour. Pine spars of the tail section of 2X8 mm it is necessary to narrow the end to the cross section mm 2X4 Glue them in the nose. Aligning the ruler on the bottom of the fuselage, install the rear boss.
After drying glue the nose panel until the trailing edge of the wing millimeter plywood. The same thickness Has the “lining” of the tail, only the workpiece to be planed from Linden. Wrapped the fuselage with a rubber band, check for twists and bends. If everything is in order, hang it vertically to dry. In a day you can do Vykurovanie and external pasting colored paper on long-amalite. After these operations, glued box stabilizer made out of plywood and slats, and a pin bindings wick.
The KEEL of packing foam edging strips 1,5×1,5 mm in the same way as the rudder, which is “sewn” to the trailing edge of the keel. Exterior finish consists of pasting tissue paper on the glue pre-treated with emery paper details. Varnishing vertical tail, apply more thin layers of varnish (there should be three). Do not regret time for intermediate drying, otherwise the foam will dissolve the acetone that is part of emelita, and these details have to be taken again. The keel is glued on epoxy resin to the upper rail of the rear fuselage. 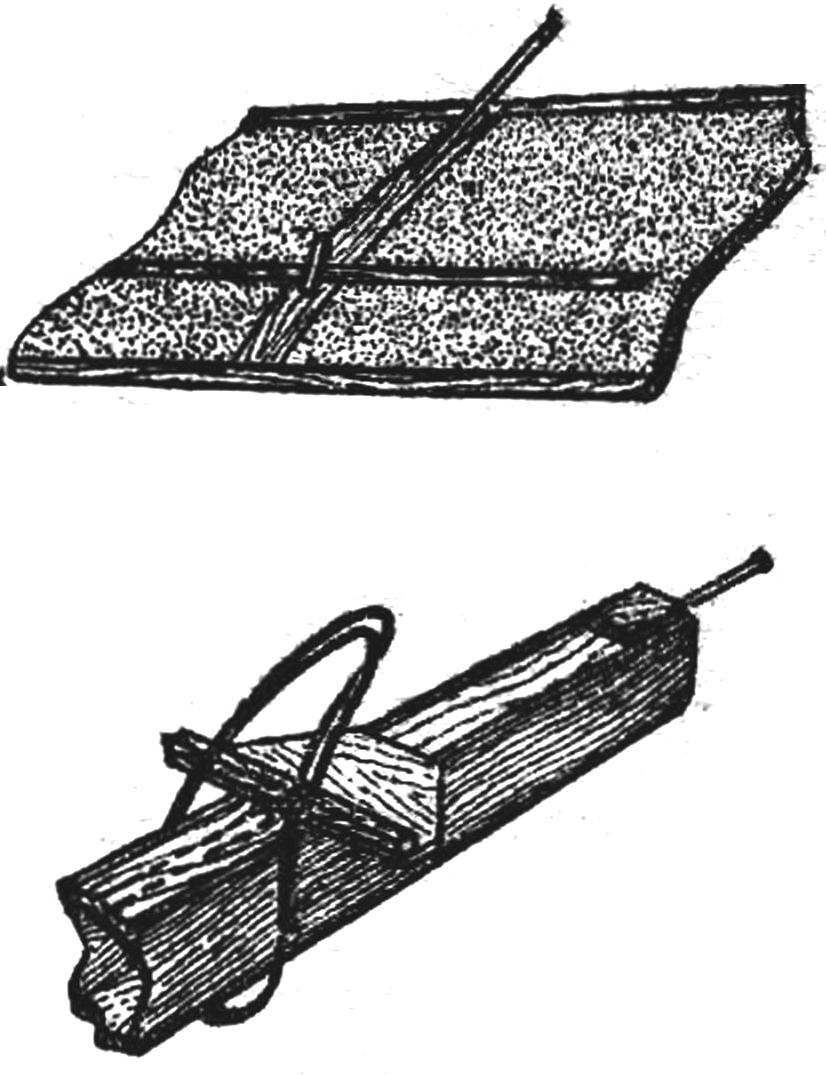 Installation of the stabilizer on the rear fuselage.
The STABILIZER design is similar to the keel, only Reiki have its edging section 2.5X2,5 mm, and in the middle part embedded in the side rail of same rail. The Central “rib” — of curved by drawing the lime plate 2,5X15 mm. Cutting off from it two strips of 3 mm width, use them for endings, which, together with the Central “rib” glue in the stabilizer. Before doing this bend the foam billet so they took the form of approximately corresponding to the profile of the horizontal tail. After finish will set the pins to bind and fuse to the rubber ring mounts.
The WING is detachable, consists of two symmetrical halves. Vystrugat all the slats, cut them to length. In addition, for those who will serve ribs, it is best to use simple patterns (four pieces or one stop), which will provide the necessary accuracy of length and bevel the ends. Can be done in another way: the plates are cut, processed and then cut into the same lath cross-section ribs 2×1,5 mm.
Wing Assembly begins with the spar. The slipway will serve two flat Board, fastened at a right angle to form a corner. Both beam flange together with his wall. When the glue dries, one of the planks of the bench, place the drawing of the console in 1:1 scale. The pins fasten the front edge. Spreading the epoxy and using the same pins, place the lower part of the nose ribs and push him to the back of the spar. The upper are inserted, not yet hardened glue (it should be applied minimum number). A day later the frame is removed from the pile. Placed under the longitudinal Board thickness of 5 mm and the same way going to the back of the wing. Until the resin hardens, glue the two stringers.
After Stripping the console and fine-tuning the shape of the front and rear edges of the cut end-part — future “ears” and wire them to the Central part of the plywood (1 mm) plates from both sides of the wall of the spar. The ending (they are made from lime plate 4 mm thick) must be located above the slipway at a height of 100 mm. Note that before this operation it is necessary to adjust the length of the spar and stringers. 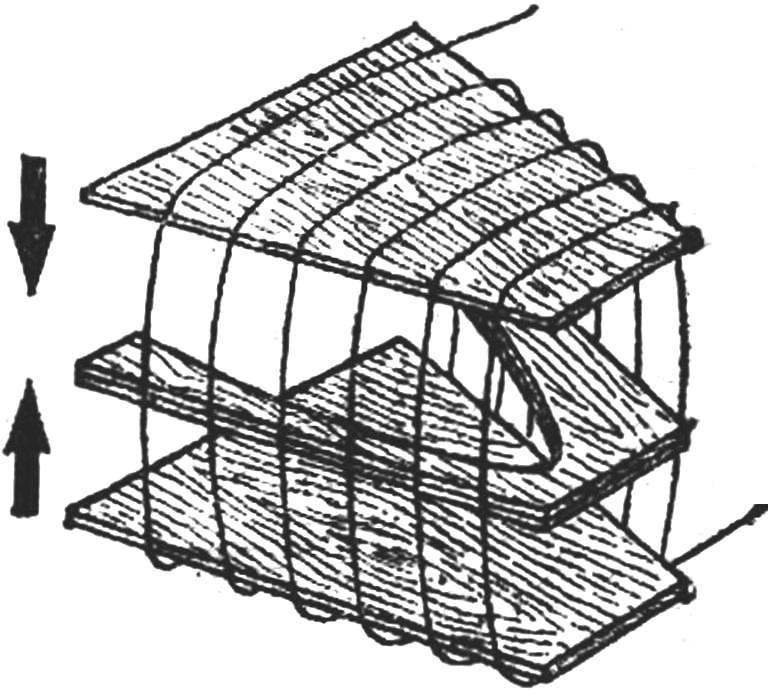 Assembly is under the tongue attaching the wing.
Now for the boxes — they will include language wing mounting. Each of them is made of two sheets of plywood 1 mm thick, between which the glued strip of the same thickness as the language, to 1.5 mm Ready box saw round, sanded and wrapped with thread and glue.
Stays put on the frame of the wing in the locations shown in the drawing, scarves of lime, 1.5 mm thick, embedding box and grinded root of the wing. It is covered long-fibre paper and covered with five layers of liquid Amalita.
Weight of the finished airframe the following elements: a fuselage with a language without reload of the nose 102 g, the wing 74 g, the stabilizer 7 g — a total of 183 g. it Remains stock in 37 g used to reload the bow. Recall that the weight of such models can not be less than 220 g! Taking into account that your scale can “ignore” 1-2 g, it is better to increase the weight up to 225 g.
ASSEMBLY begins with the fact that the language wing mounting podymaetsja in the drawing and is inserted into the cutout in the fuselage. Stabilizer tie box rubber thread covering the beam of the fuselage and the pin on the horizontal stab. Thread the pull pin fixing the wick. Attach both halves of the wing, and check its position relative to the stabilizer. “Ears” to screw over the stove, giving them a small negative angle (2 to 4 mm on the outer ends of the rear edges), check the angles of the wing (+3°) and horizontal tail (-0,5°), the position of the center of gravity (CG) of the model (68 mm behind the front edge of the wing). Screw starter hook to attach the stopper of the rudder and install the retaining screws M2.
The first flight only in the evening or in calm weather. And don’t forget to clip and light the wick! Even from ten meters of altitude your model, caught a sudden updraft, can go so far that you won’t be able to find her.
Adjustment begins with trial runs of your hand. Small shortcomings in planning can be corrected, selecting the angle of attack of the stabilizer. To do this, lay a plate thickness of 0.5 mm under the rear edge. Significant weaknesses it is better to compensate by changing the position of the CG. When finally the model will be good for planning, it is necessary to accurately determine the CG and drill in the fuselage a few holes Ø 3 mm (with a step of 6 PN) with the starting hook. First” Jack — in 5-6 mm in front of the CG.
As a rule, the model never has aerodynamic symmetry. It is detected on the first launches, the glider goes into specific only for this model turn. The selection of the rudder make sure the model was on the opposite circle. Such adjustment will help her better to stay in the narrow updrafts. The hook is screwed on the inner (relative to the center of the given curve) side of the fuselage. Just now try a puff on the guard rails with a length of 15 m. If the plane does not have random twists, the start takes place without difficulties up to the vertical position of the handrail. If is a marked tendency for the departure of the glider to the side, adjust the rudder. In extreme cases, move the hook one hole forward. With proper debugging in the final phase of the model is well dispersed that allows you to “throw” her on a trajectory upward spiral. Thus, when sufficient strength of the wings can score an additional 6 to 9 m height.
DMITRIYEV